The confluence seemed perfect: just after being awarded the Pritzker Prize on March 3, Dublin-based Grafton Architects should also have been celebrating the completion of a suite of three stunning academic buildings. The trio lined up along a meridian through western Europe, from Kingston-upon-Thames, just west of London (Kingston University Town House), south to the outskirts of Paris (Institut Mines-Télécom, Paris-Saclay), then to Toulouse, France. But with the advent of the COVID-19 pandemic’s closing universities and canceling travel, instead of a celebration, it has been a time for introspection for Grafton founding partners Yvonne Farrell and Shelley McNa­mara. “The lesson of the coronavirus,” says Farrell, “is that architecture is a physical expe­rience and that humans react to space physically.” Without the physical relationship, she suggests, there is no emotion in architecture.

Few new buildings make the absence of physical experience more regrettable than the Toulouse School of Economics (TSE), which is arguably the greatest in their recent trium­virate of powerful, sophisticated buildings. While the IMT building outside Paris suc­cessfully conjures up its own architectural language amid the semi-academic, semicorporate environment of a new research park, it is less nuanced than the TSE’s; the building in Kingston gives a sprawling ad hoc campus a presence on the main road, but it is limited in its scope. 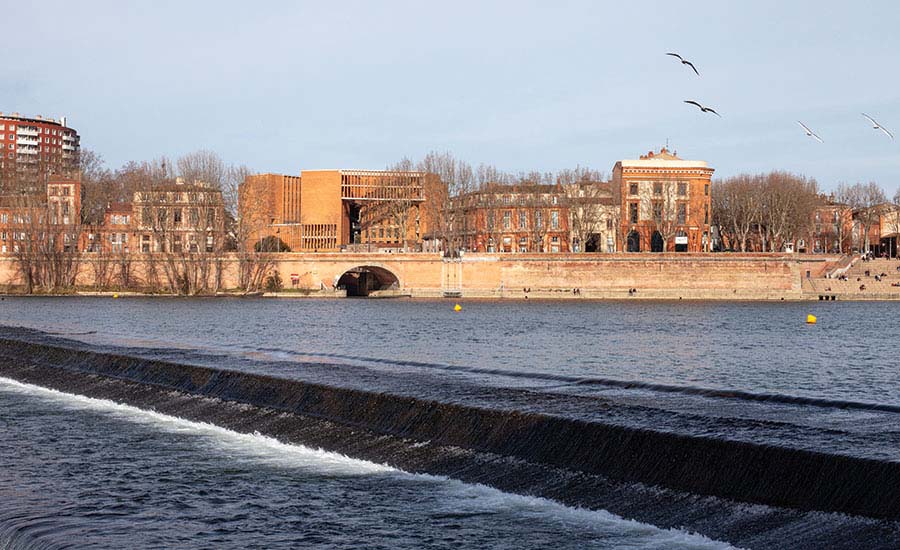 The school sits on a promontory along the Garonne River. Photo © Frédérique Félix-Faure, click to enlarge.

The Toulouse School of Economics, meanwhile, capitalizes on “what you might call a terrifyingly rich site,” says Farrell. It stands on the edge of the old Roman heart of the southern French city, on the point where waters from the River Garonne enter the beautiful Canal de Brienne, dug in the 18th century. Boldly occupying a rare breach in the city’s old Roman wall on one side and standing up to high-rise housing blocks to the north, the building extends to the limit of an otherwise awkward triangular site at the southern edge of the university, rising to the full height prescribed by the Bâtiments de France—the base of the cupola of the adjacent church, St. Pierre des Chartreux.

The architects have responded to this rich site by creating a dynamic 194,000-square-foot structure with a centripetal plan, a choreographed pirouette of brick. At its core, it is unmistakably a Grafton building—­redoubtable, generous, concrete. In plan, it is relatively simple. The building has three wings, the central of which is straight and the two outermost of which dogleg to the perimeter. The southeastern tips of these wings contains bigger spaces, such as the two largest auditoria. (Throughout are a total of 20 meeting rooms and 288 offices over six floors.) These wings are intersected midway by a transversal “coursive,” or walkway, an element that binds the building together and creates the primary armature of circulation. Yet it also makes the experience of the central courtyard richer by dividing it into discrete areas and allowing a visual interplay between interior and exterior. 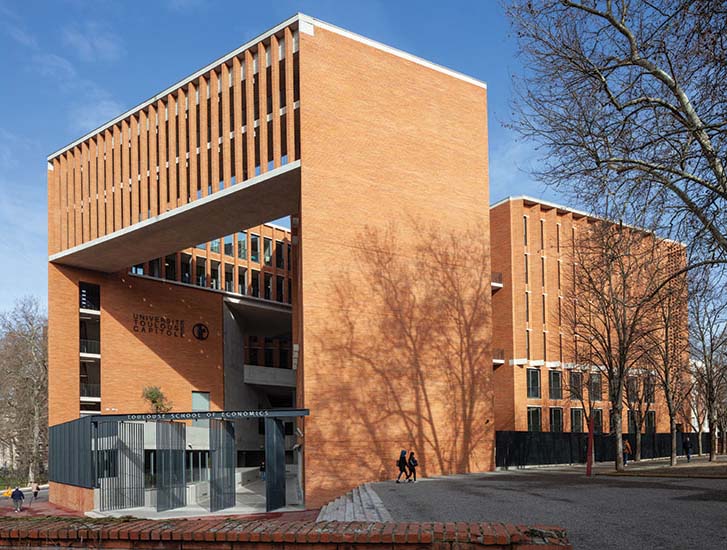 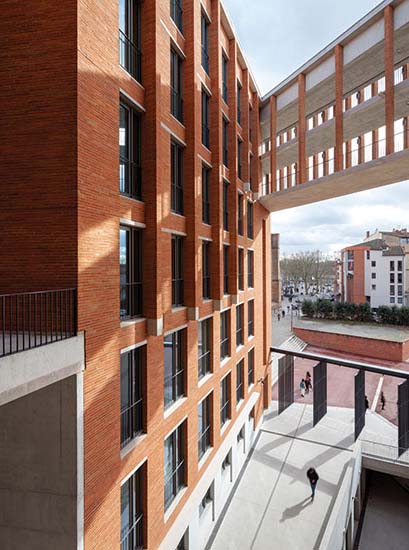 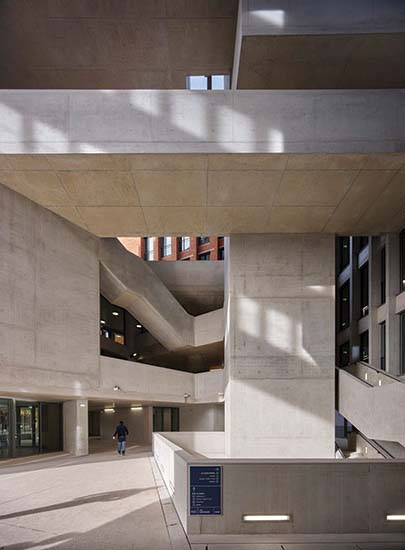 The entrance and gently rising path (1, at left in photo, and 2) lead to the concrete central core (3). Photos 1 & 2 © Frédérique Félix-Faure, Photo 3 © Dennis Gilbert

The central courtyard is entered via a gentle ramp between two wings rising from the plaza to the southwest. This small incline is enough to create a sense of arrival, believes Farrell. ”Somehow, it holds you enough that you stop,” she says. “On the left-hand side you can have a cup of coffee at the ground floor café, and you might just leave then, if you’re a member of the public. But if you are a professor, or a researcher, then you’d make choices. You might go up the stairs. You might decide you’d go on the lift, or you might just amble around.”

Unlike the perimeter of the wings, which are clad in brick, the concrete of the coursive is left bare. Approached through the spaces between the wings, it is tough in appearance and clearly where the business of the building takes place. The journey into the school is a dance between interior and exterior, as one gazes through the coursive to the courtyard beyond or up through it at the sky above. “We ended up with what we call a sundial. It’s a central space which inhales and exhales at the edges to deal with the conditions around us,” says McNamara. The building opens out as one ascends on its uncovered stairs, with open walkways at upper levels predominating and views of the city becoming an omnipresence. 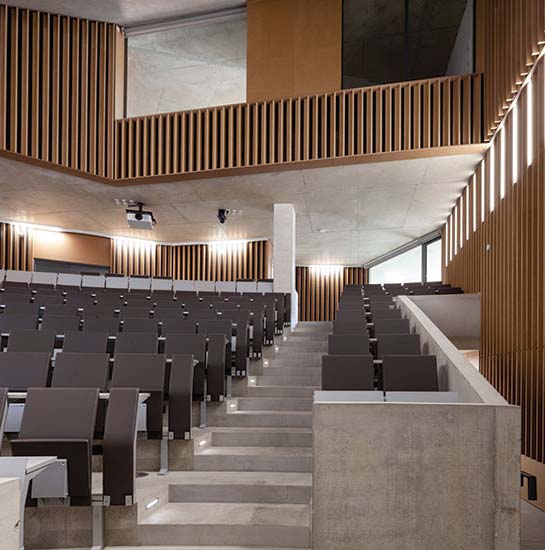 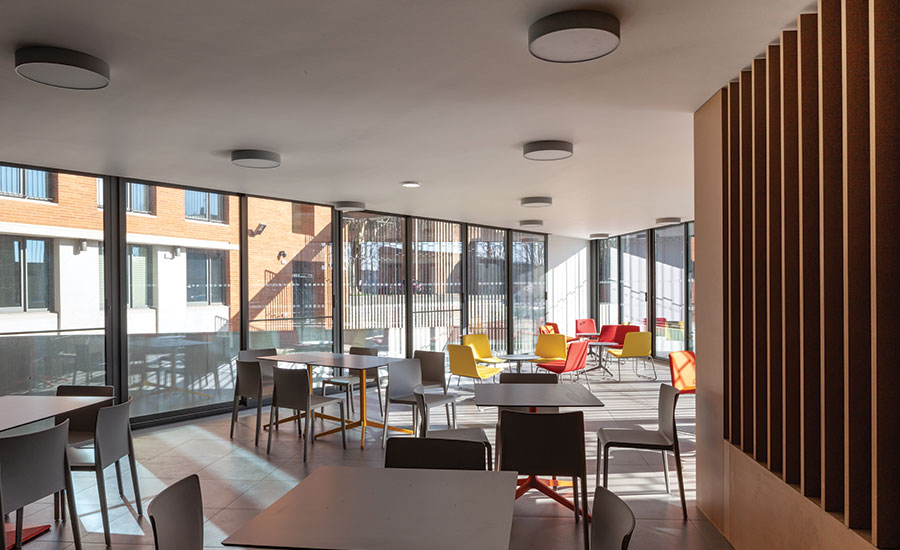 One of the auditoria (4) and the café (5). Photos © Frédérique Félix-Faure

The central elevator core, which dominates this space, is key to the structure, but the building is further strengthened at the end of the wings by vertical concrete columns secured by lateral beams. These act effectively as buttresses, less legible than the ones that support the town’s medieval churches but just as strong. The vertical ­buttresses are inlaid with courses of brick, interrupted by perforations: at these junctures the brick skin of the building stands separate from the concrete mass, creating semi-external stair towers that, acting as fire ­escapes, also provide an alternative route to the ­central circulation. 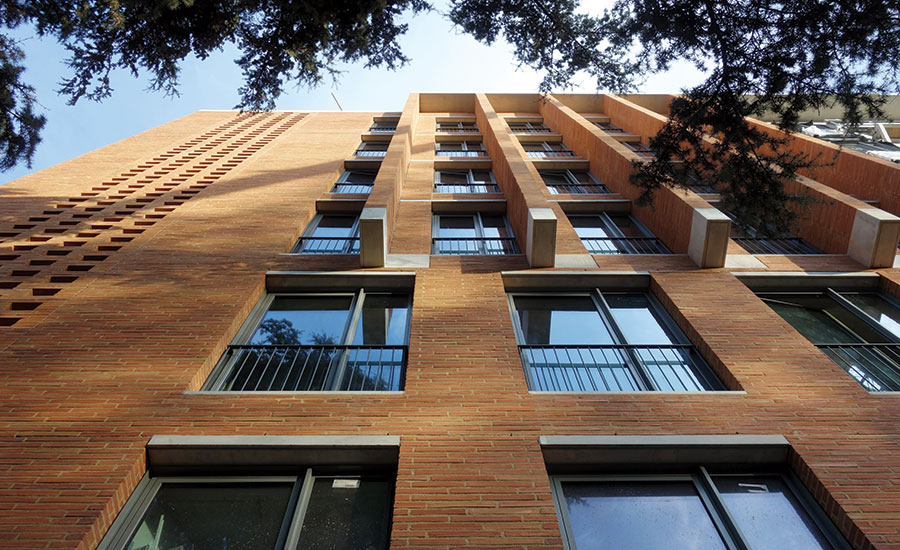 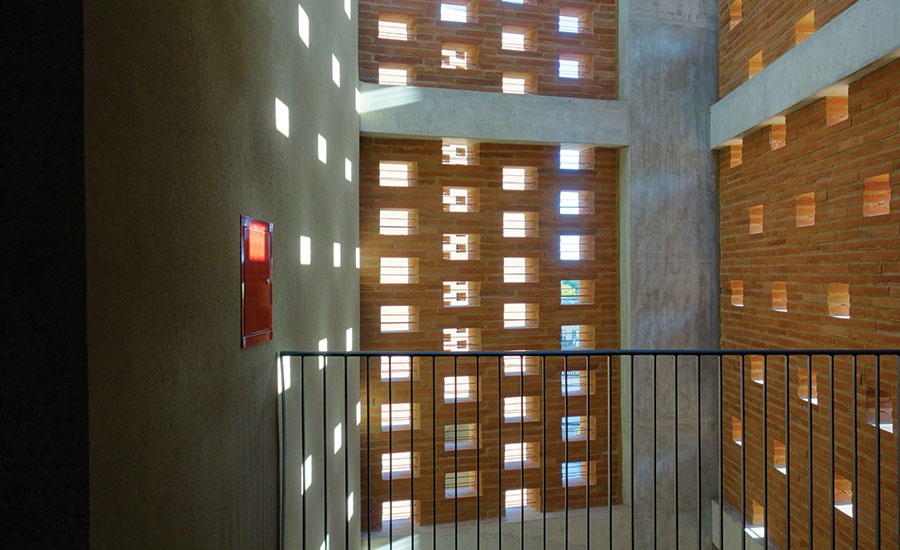 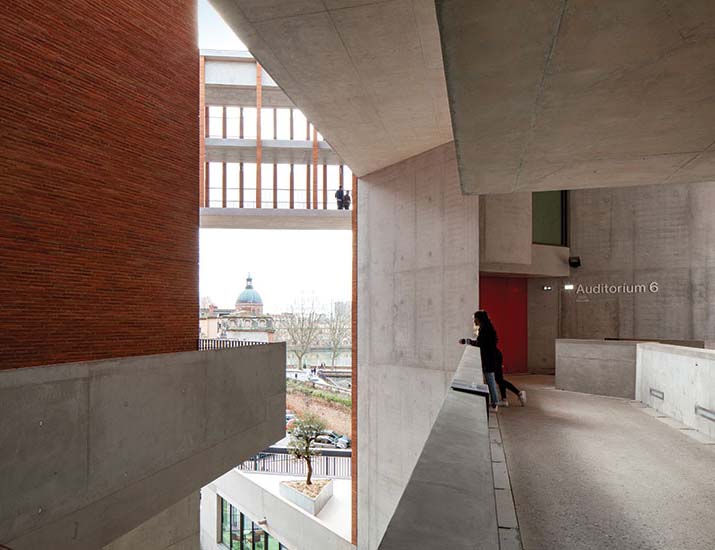 The brick on the exterior (6) and inside the semi-external stair towers (7) is locally made. The building’s many vantage points make the city an omnipresence (8). Photos © Grafton Architects

“We were trying to take things we’ve fallen in love with in Toulouse and find a way of stitching them together,” says McNamara, contrasting their collage strategy in Toulouse with their design methodology on, say, the Bocconi University building in Milan, which has an urbanistic plan based on a section. The predominant exterior material of TSE is a case in point. The brick was produced locally and follows the dimensions of the Roman version (16½ inches long by 2 inches high and modulated in width for varying effects). It is ubiquitous in the construction of the major landmarks of the town, like the Gothic Church of the Jacobins—very thin and softly colored. “The brick looks edible,” says McNamara. “Like a biscuit,” says Farrell.

Trapped as we currently all are in lockdown, we see it as a particularly tantalizing, tactile piece of architecture—unabashed in its scale and presence. It is already an established presence on the Toulouse riverscape. “The building anchors you at that particular coordinate on the earth,” says Farrell. “You feel the Garonne, you feel the Canal de Brienne.” If only they could, right now! For the moment, though, McNamara’s and Farrell’s thoughts remain on the health of their families and colleagues, with their Pritzker Champagne remaining metaphorically on ice. “We haven’t had the opportunity to celebrate yet,” they say. “It will make it all the sweeter when we do.” 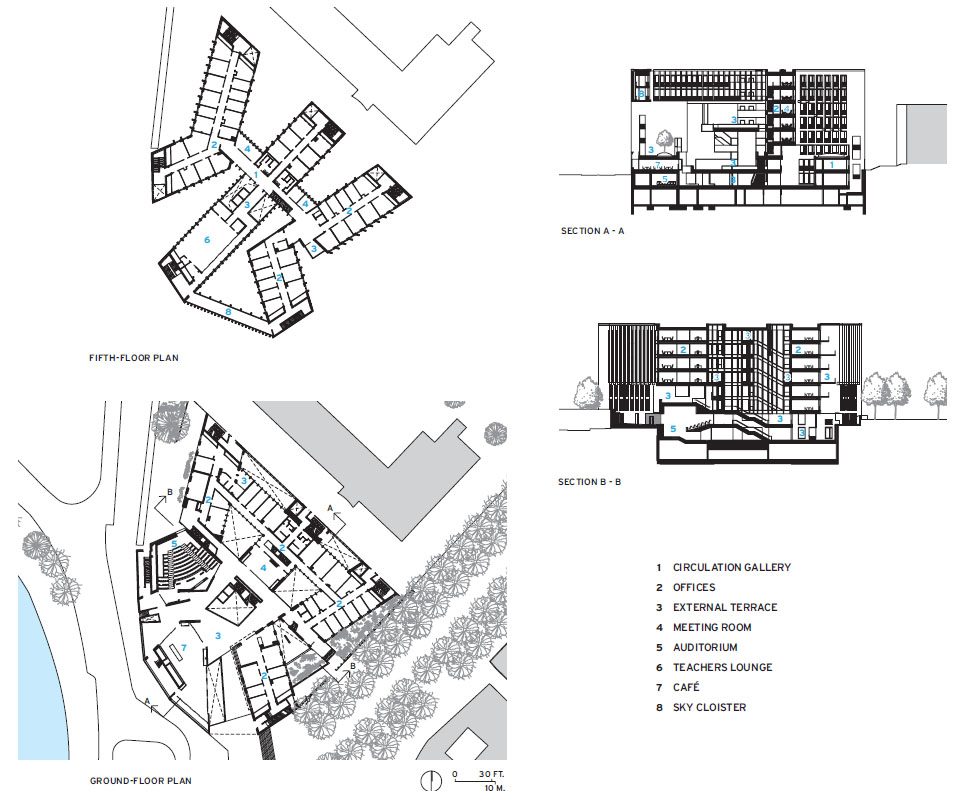