Though the coastal city of Tainan is Taiwan’s oldest urban enclave—and proud of it, says Hui-Hsin Liao, architect and project coordinator at MVRDV—its residents also appreciate the region’s modern relics. The Netherlands-based firm recently completed Tainan Spring, a sunken “urban lagoon” and outdoor complex that draws from the not-so-distant-past: it is built within the ruins of an abandoned shopping mall.

The origins of the site itself can be traced back hundreds of years. In the 17th century, the abutting Tainan Canal extended inland, and the area was home to a prominent shipping port. By the 1960s, a portion of the harbor was closed and, in 1983, developers built the multilevel China-Town Mall, which included retail, housing, and entertainment. The partially subterranean complex was once a popular destination for locals, but its novelty waned as it deteriorated and became crime infested. The site was neglected until five years ago, when the Urban Development Bureau of the Tainan City Government commissioned MVRDV—as the winners of an international landscape competition—to redesign the five-acre area as an outdoor plaza and transform a stretch of Haian Road, which runs perpendicular to it. 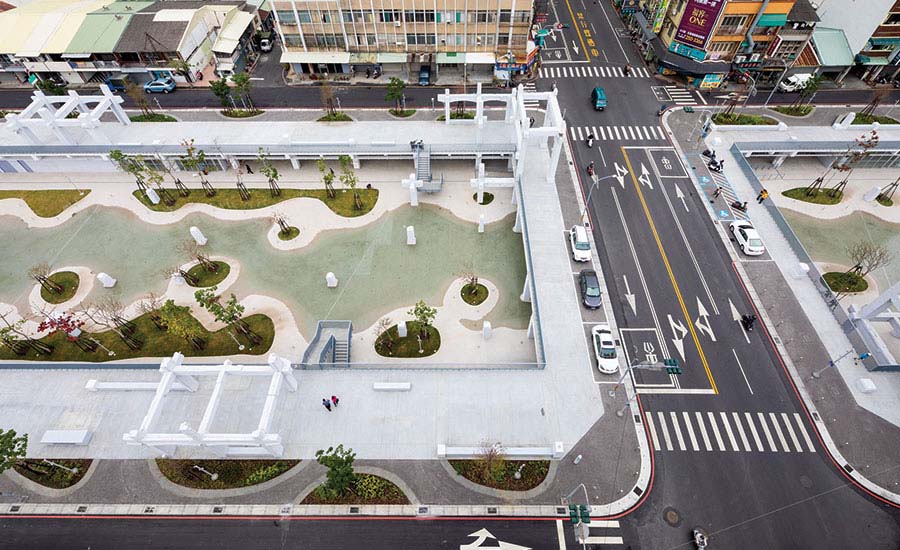 In early March, Tainan Spring opened to favorable reviews from locals (at the time of this interview, on March 18, Taiwan had few coronavirus patients and the public was still free to move about the city as usual). Photo © Daria Scagliola, click to enlarge.

After demolishing most of the mall’s structure, the team resurfaced the floors of the underground parking level with terrazzo and added water and foliage to create two “urban lagoons” which are open to the public for wading and relaxing year-round in the tropical heat. The resulting design of the bodies of water is a delightful hybrid of the natural and the manmade, with gradually sloping shores and sandbar-like islands throughout, some of which are also landscaped. With the help of a local consultant, the firm planted the former shopping mall—and the length of Haian Road—with grass and trees native to the region, says Liao, who also cites feng shui as a major influence throughout the planning phase. As the plantings grow in, she hopes they will transform the artificial bodies of water into a lush oasis. 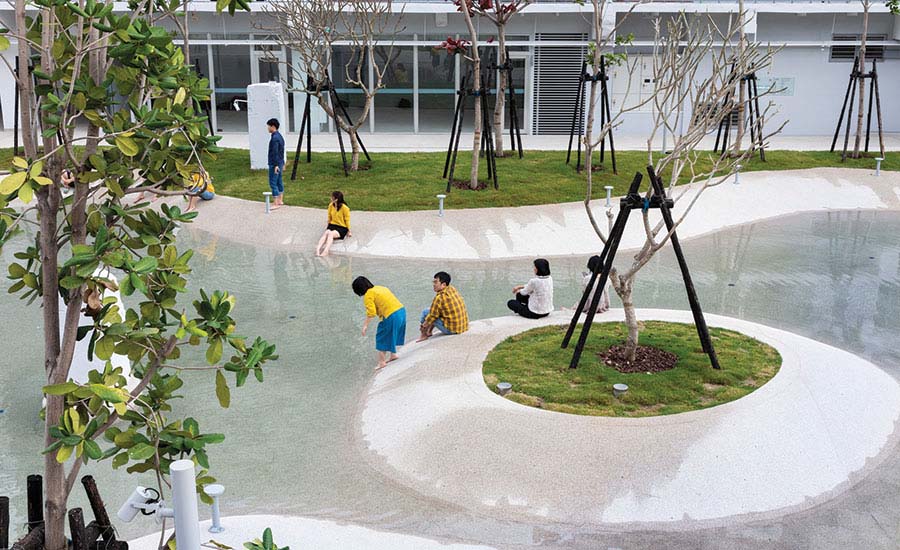 Designed during a particularly dire dengue fever outbreak in 2015, MVRDV made the water levels mutable, between 2 and 20 inches, says Liao, so that even in another flare-up of the mosquito-borne epidemic, the area could remain open with a very shallow expanse of water, minimizing mosquitoes’ ability to breed. (More recently, Taiwan has also felt the impact of COVID-19, though—as of press time—not nearly as severely as its neighboring countries.)

The family-friendly project is also a model for a circular economy in Taiwan, says Liao: “When we demolished the shopping complex, we recycled most of the metal and materials.” Some of the “ruins” were preserved for posterity, however. Water tanks and other modern artifacts from the mall remain in the subbasement level and are visible to the public through two panels of glass in the terrazzo floor beside the lagoons. By offering a glimpse into the inner workings of the former retail center, Liao hopes the public will appreciate the new landscape as a part of Tainan’s contemporary history.