Ever since the drawings were unveiled in 1980, the Portland Building in Oregon has drawn plaudits and catcalls. Designed by Michael Graves with Emery Roth & Sons and considered to be among the world’s first public Postmodern buildings, the municipal-services structure’s garlands and colors seemed to be an Oz-like technicolor moment in the dreary movie of monochromatic Modernism. Vincent Scully commended the finished work in 1982 for the way the “detailing and color relate to the pre-International Style buildings in the city,” and its attempt “to revive the urban fabric.” But, as the pop-star building glowed brightly in the pages of Time, Newsweek, and People, the client, the City of Portland—and its 1,500 employees working inside—suffered.

The architecture’s failures have been well documented, from darkly tinted, cell-block-sized windows to water infiltration through the concrete walls, which left carpeting stained and moldy. Graves long blamed the many functional flaws on the budget. As one of the earliest public projects to use a contractor-led “design-build” process, the Portland Building became a 15-story study in value engineering. Its most defining features—the jaunty salmon/teal/cream-colored array of Mayan-inflected columns, keystones, and garlands—relied on materials befitting a community stage set: paint, tile, and stucco.

Politicians and pundits have long brayed for demolition. In defense, Portland preservation architect Peter Meijer wrote its successful 2011 nomination to the National Register of Historic Places. (Such a listing highlights its architectural relevance, but doesn’t guarantee it will stay in place forever.) City officials grudgingly chose to renovate, and global firm DLR Group began the $195 million redo in 2016; it recently finished ahead of schedule. The team calls this effort a “reconstruction”—every component is new except the original poured-concrete frame and walls. Before his death in 2015, Graves outlined changes he thought should be made: replacing the tinted glass, lighting the building’s dreary arcade, and converting the parking garage and its cavernous entrance, which faces a park, into something “joyous.” DLR Group heeded the advice and, working with Patrick Burke of Michael Graves Architecture & Design, took even bolder action. 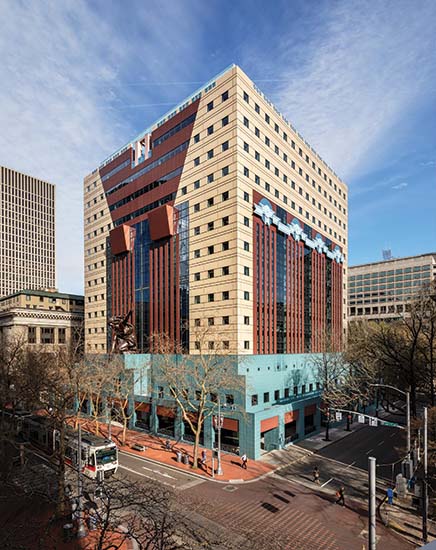 The renovation of Michael Graves’s Portland Building by DLR Group includes an aluminum curtain wall over the concrete structure (above) and a terra-cotta rainscreen on the podium (top). Photo © James Ewing/JBSA, click to enlarge.

Most dramatically, DLR Group wrapped the entire concrete cubiform mass in a unitized aluminum curtain wall that waterproofs and adds insulation. The firm clad the podium with a terra-cotta rainscreen instead of the original teal tiles. New windows replace the dark glass and increase light transmission 10-fold. The lighter glass in the six-story vertical flutes of Graves’s graphic rendition of columns allows new conference rooms on each floor to be brightly daylit. The relocation of the HVAC system to the roof opened the second floor to new meeting rooms bountifully lit by windows. The parking garage’s entrance is now glass, with public gathering spaces behind it.

But controversy dogs the Portland Building once again. Despite Portland Landmarks Commission’s unanimous approval of DLR Group’s design, the State Office of Historic Preservation may delist it from the Historic Register owing to the radical change of materials. To Meijer, the Register nomination author, the reconstruction is an “open and sore wound.” He thought the original materials could be kept, and provided drawings to make the case. A representative from the state office said the agency has not yet set a time for delisting.

DLR Group’s approach and the potential consequences foreground a fundamental question in the preservation of landmark Modernist and Postmodernist buildings, many made with materials that fail, are discontinued, or fall short of today’s performance demands: what’s historic—the building with its original materials, or the design concept?