Hospital Expansion at the University of Virginia by Perkins and Will

Disaster preparedness was on the minds of everyone involved in the design of the new emergency department (ED) and hospital expansion at the University of Virginia (UVA) in Charlottes­ville. But, at the time, they were thinking more along the lines of a 9/11-type attack or an Ebola or flu outbreak. No one could have predicted a pandemic of a virus never before seen in humans. COVID-19 forced a last-minute change of course.

Though the ED, located in the base of the building, had been operational for some months, the six-story, curving, glass patient bed tower had yet to open. “We planned on inaugurating the tower by June, but opened part of it for treatment of coronavirus patients in early April,” recalls Kevin Fox, director of facilities planning and capital development at UVA. The new hospital was never overwhelmed—it treated a steady volume of 25 to 30 infected individuals at a time before cases in central Virginia plateaued in late spring. To do so, it underwent some speedy but significant modifications. Says Fox, “We already had three airborne-infection-isolation (AII) rooms on the third floor, but we were able to utilize a smoke-evacuation system and cobbled together some ductwork fairly quickly to create 12 additional rooms that have the static pressure equivalent of AII.” As a second phase of the response, the hospital procured three high-velocity fans that were installed in the mechanical space on the roof to create negative-pressure rooms for the rest of the third floor and all of the fourth floor. In these rooms, lower air pressure allows outside air into the segregated environment. Any contaminated air that flows out of the room is rerouted away from other patients and hospital staff or passes through a filter. 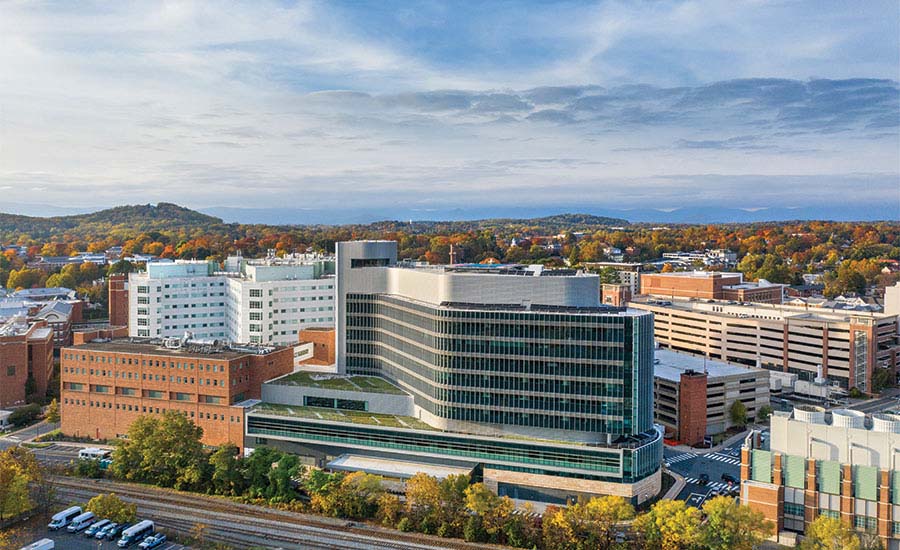 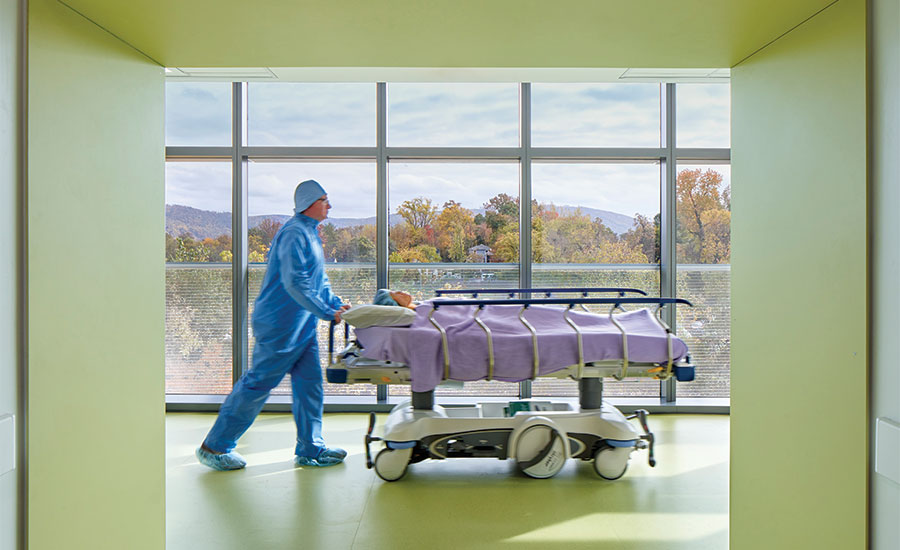 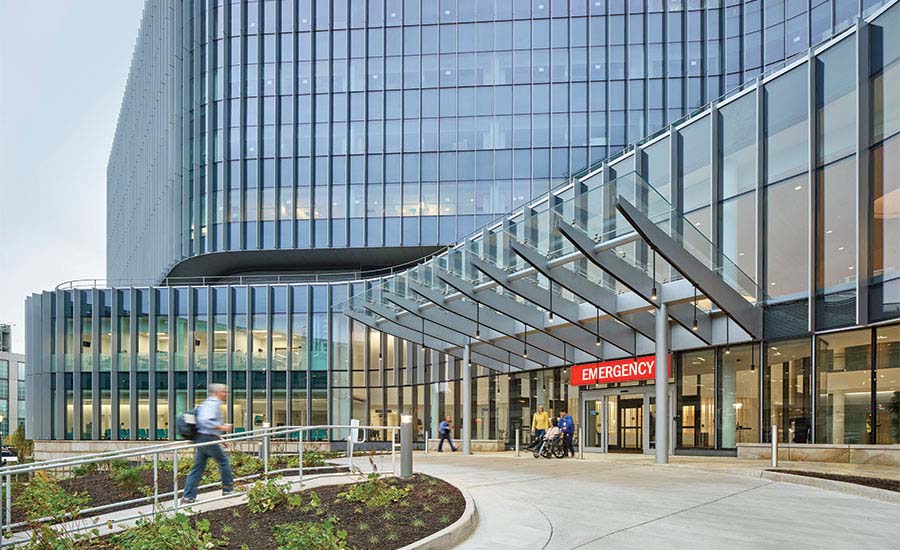 The blue ridge mountains offer a scenic backdrop to the medical campus (1) and are visible from many areas of the bed tower (2). Patients and family enter the new emergency department through a landscaped, semicircular welcome area (3). Photos © Todd Mason, click to enlarge.

With almost half of its firmwide portfolio devoted to health care, Perkins and Will, the building’s designer, knew to allow for plenty of contingencies. Because the patient rooms were designed as universal rooms—a more expensive but flexible approach that can accommodate the most stringent requirements of use—they were easily adaptable in this scenario. The bed tower itself was overbuilt: it comprises three completed floors with 84 private patient rooms, and three additional empty levels to accommodate twice that many in the future. The tower was designed with curved walls to maximize patient privacy by blocking direct views into the rooms of other hospital occupants in the existing connected building. Staff privacy was also addressed by creating team stations behind glass walls, in addition to the more public desks in the open.

Within a plinth below the tower is the heart of the structure: the new ED nearly doubles UVA Health System’s prior urgent-care capacity, significantly reducing patient wait times. Taking advantage of a change in grade, the architects designed for ambulances to arrive at a lower level, allowing for a possible pandemic and decontamination area there, and a separate entrance for walk-in patients above. Perkins and Will global-design director Ralph Johnson calls that 28-foot-high, daylight-filled atrium on the ground level “a great public space.” In a simple but highly effective move, much of the new building, despite its deep floor plates, maximizes daylighting and views to the surrounding mountains and its own occupiable green roofs through the use of extensive glazing. 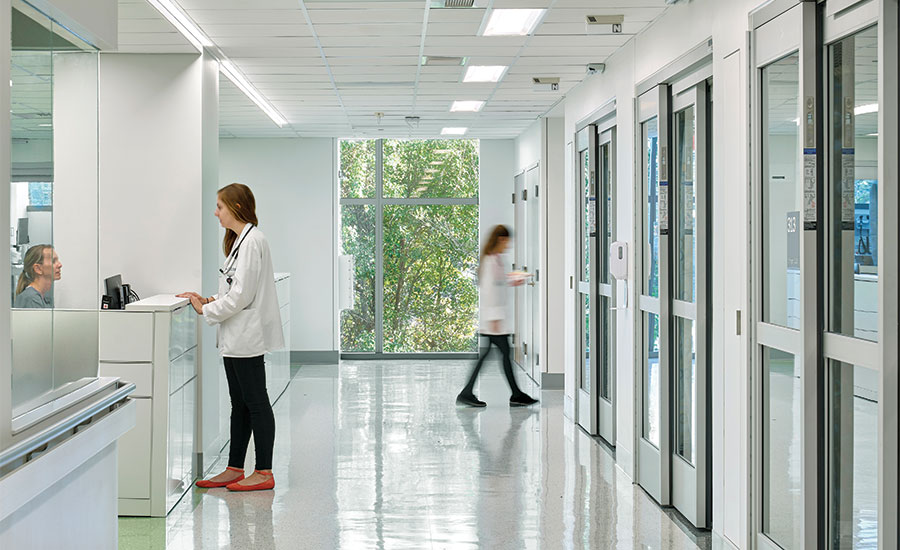 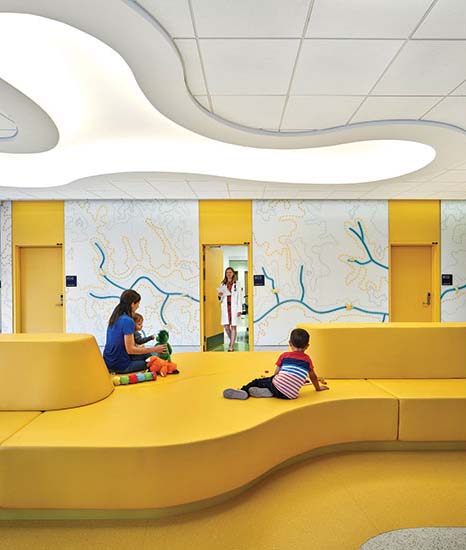 The ED also incorporates progressive strategies. It is separated into seven modules, including distinct areas for pediatrics and behavioral health, for instance, that provide safe, calming environments for children or patients in acute mental-health distress. While anterooms were “out of fashion,” according to Marvina Williams, a senior medical planner at Perkins and Will who was an ED nurse, the ED has two adjoining negative-pressure anterooms. “We were looking at an ‘ideal state,’ and that includes a certain number of infection-control rooms,” she says. The plinth contains an additional surgery floor above the ED. This floor features a CT scanner on rails—increasing access to real-time CT scans, which is an unprecedented feature in the U.S., according to UVA. For surgical teams who spend hours in an enclosed operating room, an adjoining glass corridor with views to the outdoors affords respite between procedures. “Recruit­ment and retention of staff was important to us,” says Johnson.

The design takes a serious approach to sustainability. Metal fins on the building’s exterior reduce glare and heat gain, lowering energy consumption. The new wing employs what is called net zero water-design strategies—highly unusual in a hospital. A 50,000-gallon cistern under the ambulance bay captures graywater for use in heating and cooling. “Essentially, we are back-feeding the existing chiller plant to offset the amount of water used by the low-flow fixtures,” says senior project architect Jim Woody. The green roofs mitigate water runoff.

UVA’s exemplary response to the pandemic was critical in the short term, thanks in large part to design decisions—not always easy or inexpensive—that were made for the long term. At press time, with the crisis still affecting operations, the hospital has had to furlough some staff. Still, that the new building weathered the impact of COVID-19 so well before it fully opened points to continued success as the hospital enters a post-pandemic world. 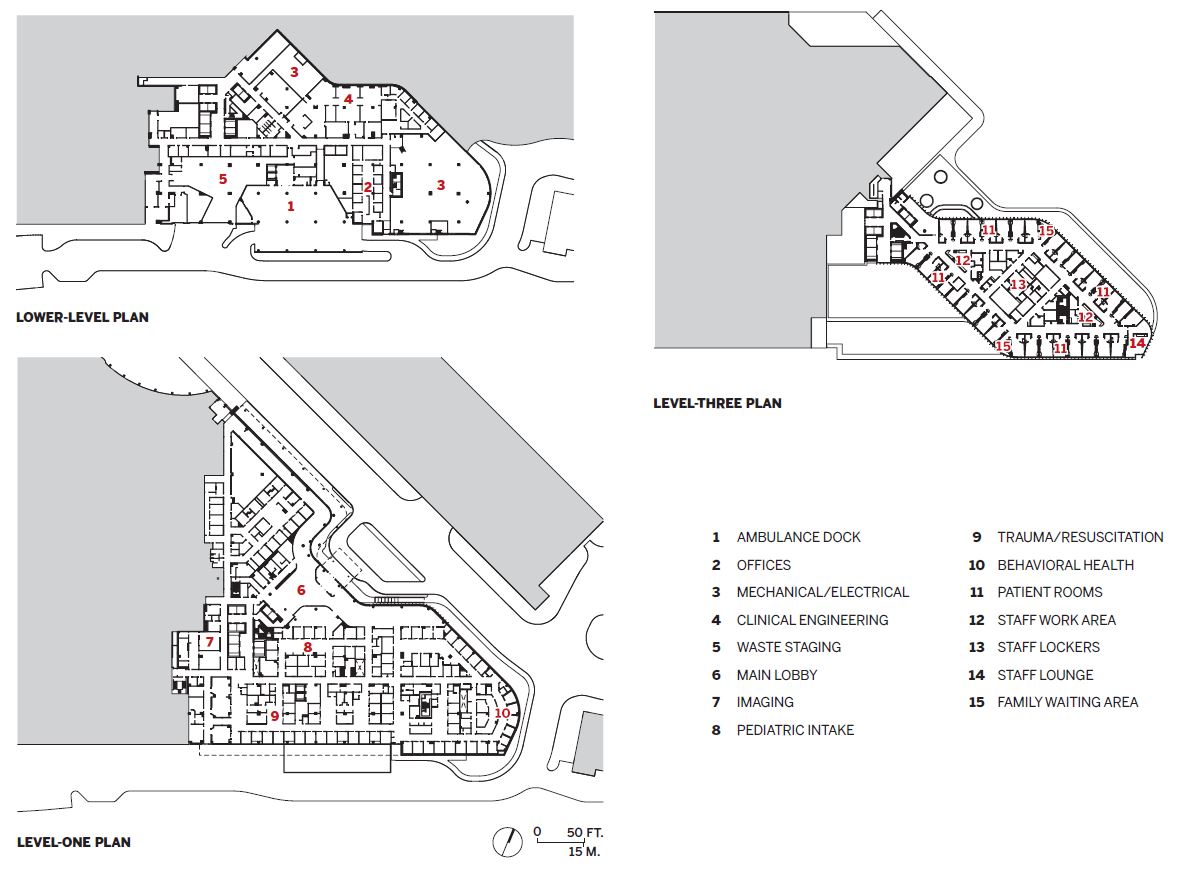