The most distinguishing characteristic of Colorado Springs, about an hour’s drive south of Denver, isn’t in the city. It’s Pikes Peak, the 14,115-foot-high mountain that rises dramatically to the west and dominates the landscape. Wisely, the New York firm Diller Scofidio + Renfro (DS+R) embraced the granite pile in its design of the $91 million U.S. Olympic & Paralympic Museum. “It became the defining feature of our initial site plan,” says DS+R partner in charge Benjamin Gilmartin. “It’s a constant reminder that you’re in this breathtaking, Olympic-class setting.”

Located in a former light-industrial area on the edge of downtown, the three-story museum sits on a 1.7-acre triangular parcel of land overlooking an active railyard. The approach from downtown takes you due west, on a city street that dead-ends at the museum site. That was the most obvious setting for the museum, Gilmartin says, but the building would have blocked the view of Pikes Peak. Instead, the architects decided to frame the mountain by splitting the museum into two parts: a soaring main building to the south and a smaller, more earthbound structure with a café to the north. The space in between comprises a plaza that doubles as an informal amphitheater. 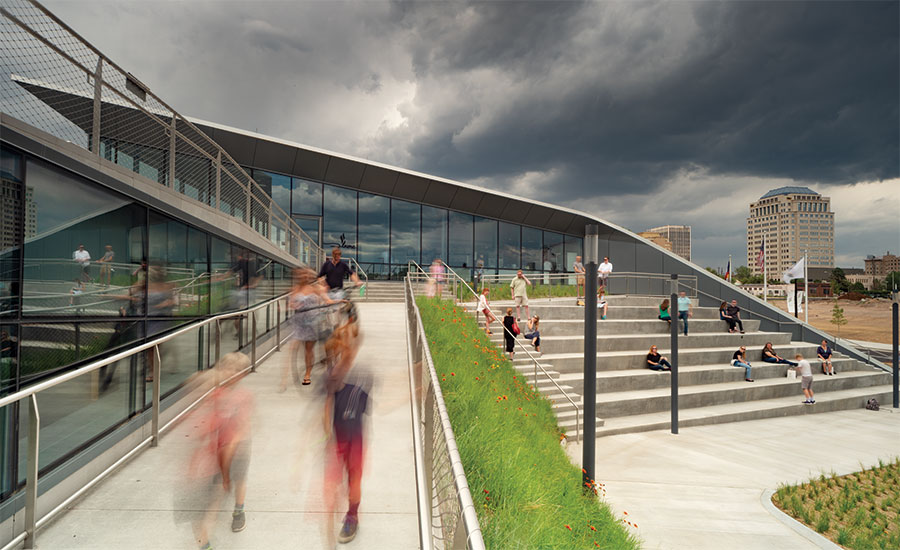 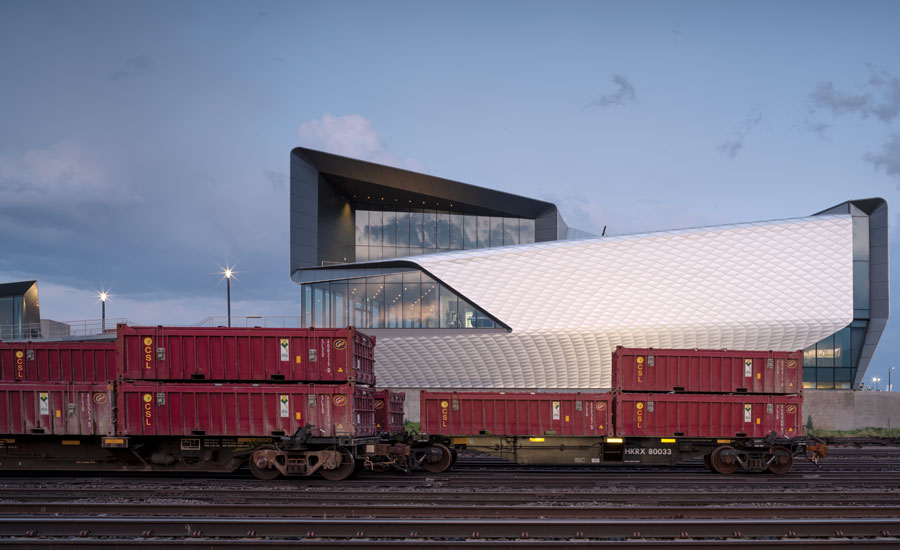 The movement of people of all abilities plays an important role both in and outside the museum (1) and acknowledges the presence of trains on nearby tracks (2). Photos &copy Nic Lehoux, click to enlarge.

For the 60,000-square-foot museum itself, DS+R found inspiration in the movement of athletes—in particular, Gilmartin says, “the way they seem to shake off the bonds of gravity that hold the rest of us to Earth.” The challenge was to convey that sense of dynamism in a building. And the solution the architects developed was to design a complex steel-frame structure that twists and turns upward, with four overlapping, petal-like volumes, above a mostly glazed ground floor. From above, the building evokes a pinwheel. On the facade, DS+R used more than 9,000 diamond-shaped anodized-aluminum panels, manufactured and installed with impressive precision. Each panel is unique and slightly offset to create a texture like snakeskin.

“It’s almost like an Olympic costume that’s stretched over the bones of the building,” Gilmartin says. The surface, which wraps and curves and folds over the irregular form, appears to be in a constant state of animation, thanks to the region’s intense and plentiful sunlight. Unlike the honeycombed glass fiber reinforced concrete “veil” DS+R designed for the Broad Museum, in Los Angeles, which some critics found disappointing, the Olympic museum’s aluminum facade feels substantial, even elegant, with a kind of monumental solidity. 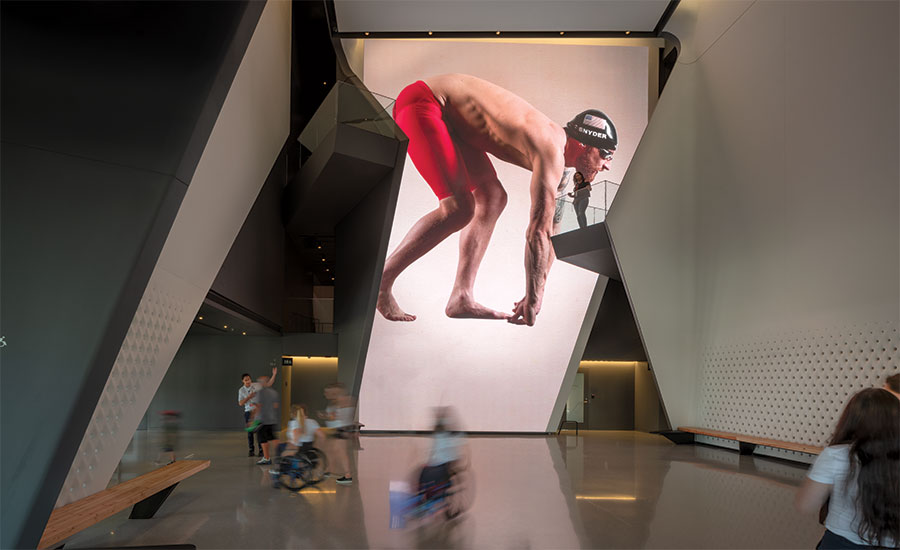 The museum, which honors both Olympic and Paralympic athletes, is fully accessible, with wide ramps that allow people of various abilities to share the same experience. (DS+R consulted with a committee of Paralympic athletes on accessibility issues early in the design process.) Visitors enter the museum through glass doors under what appears to be a giant wave of those aluminum panels. Just beyond the ticketing desk lies a 40-foot-tall atrium with perforated glass fiber reinforced gypsum screens and simple Douglas fir glulam benches. A floor-to-ceiling media wall displays ever-changing images of athletes. Visitors take an elevator to the museum’s top floor and then wind their way down through the galleries, Guggenheim style, on a series of ramps. Four glazed balconies overlook the atrium at different levels, allowing visitors to pause and regroup as they move through the galleries. 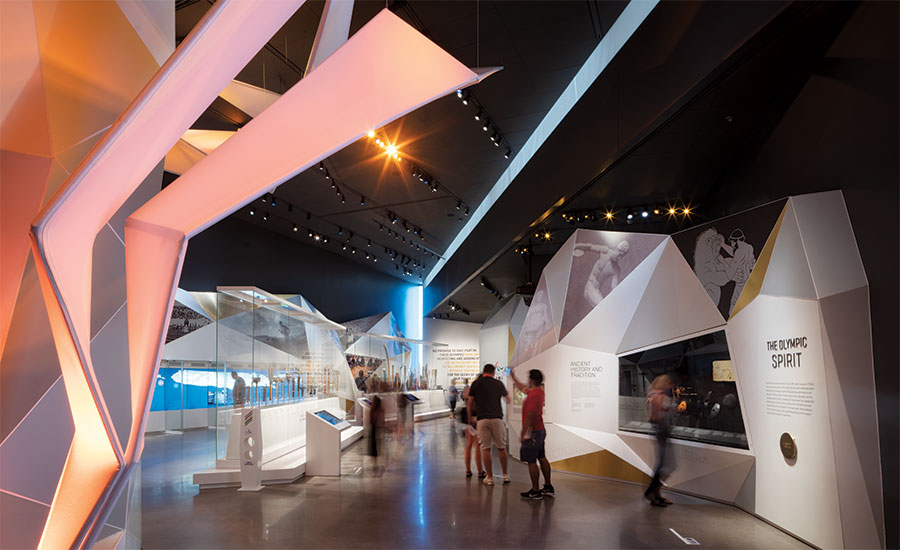 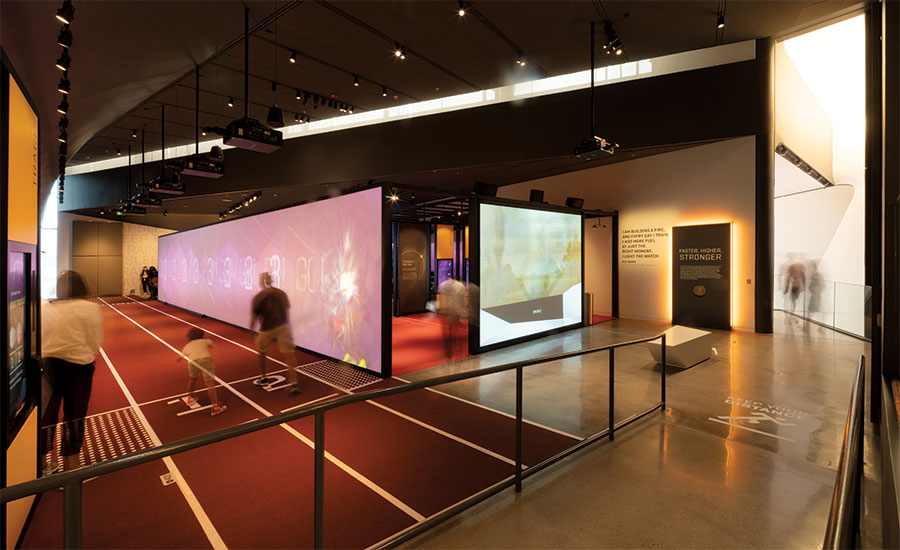 Visitors can explore exhibition galleries (3) on all three floors and even compete against virtual athletes (4). Photos &copy Nic Lehoux

The exhibition spaces, by Gallagher & Associates, contain a combination of traditional displays (there’s an impressive selection of Olympic relay torches and medals); participatory activities, including a 30-meter track where visitors can compete against virtual Olympic and Paralympic athletes; and multimedia presentations. A 2,000-square-foot theater can accommodate 132 people in regular seats, with room for five wheelchairs. Two rows of seating can be removed to create an additional 21 wheelchair spaces.

Gilmartin says DS+R “pushed hard” for windows to allow daylight into the galleries. And, indeed, there’s a clerestory window on the top floor that wraps around to become a vertical pane at the corner, and there are several other glass slivers that offer views of the mountains and downtown. (When the elevator reaches the top floor, visitors catch a quick glimpse of Pikes Peak through a west-facing window before exiting the cab.) But, overall, the gallery floors are cavelike, with little connection to the world outside. The best mountain views can be found in a third-floor board room, with 26-foot floor-to-ceiling windows and a west-facing terrace, and an event space on the second level. But neither of these is open to regular museum visitors. The lack of a panoramic view from inside the museum as part of the visitor experience is a missed opportunity. 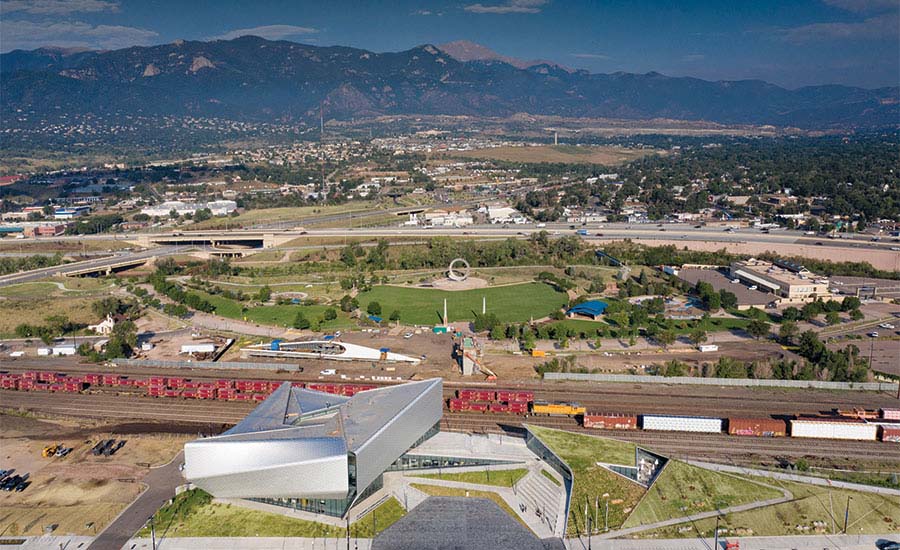 The site sits adjacent to an active railyard with America the Beautiful Park on the other side. A pedestrian bridge designed by DS+R will cross the tracks. Photo © Nic Lehoux

The café, by contrast, takes full advantage of the great outdoors. Reached by a gently sloping ramp that begins just outside the museum entrance, the café itself is relatively small but has glass walls and flexible seating that spills out onto a west-facing terrace. (One dining area doubles as a space for educational programs.) From there, visitors will eventually be able to cross the railroad tracks on a pedestrian bridge, also designed by DS+R. Scheduled to open by the end of the year, the asymmetrical stressed-skin bridge—which resembles the blade of a giant wind turbine—will connect the museum complex with America the Beautiful Park. (Katharine Lee Bates wrote the words to the patriotic song after an excursion to the top of Pikes Peak in the summer of 1893.) 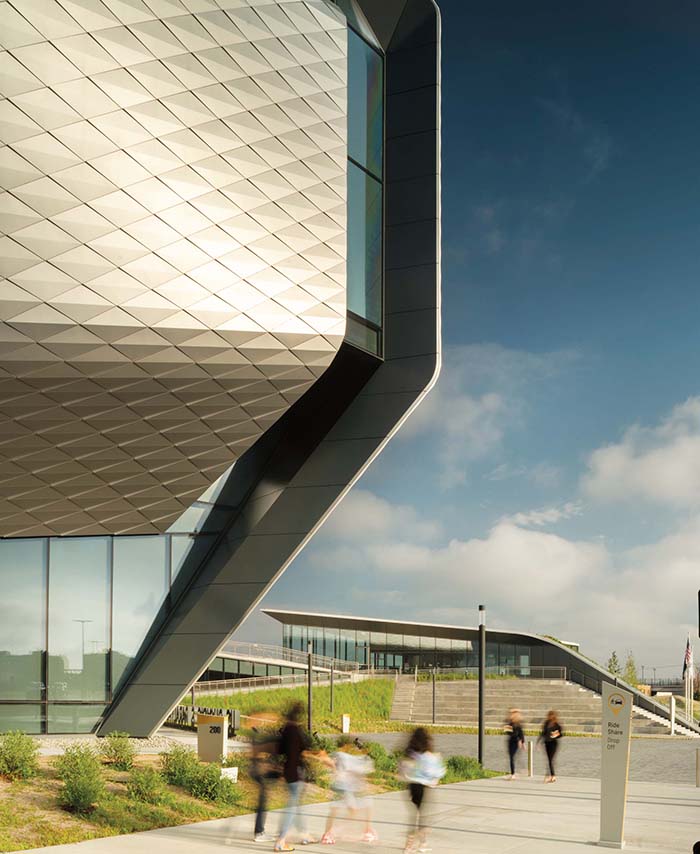 Colorado Springs, population 478,000, has long been home to the U.S. Olympic Committee and the U.S. Olympic Training Center, but the new museum is destined to become a major tourist attraction for the region. It’s also the linchpin of a major downtown redevelopment plan, which calls for an outdoor stadium, residences, offices, hotels, and retail. The museum opened to the public on July 30, delayed by about two months because of the Covid-19 pandemic. Museum officials added a number of safety precautions, including a timed-ticketing system and limits on the number of daily visitors.

When DS+R was selected to design the Olympic Museum in 2014, there was the usual grousing about shutting out local architects in favor of an out-of-town firm with a growing international following. The reaction wasn’t surprising, especially given the city’s reputation for political and cultural conservatism. But it was a smart move. DS+R’s bold design has been enthusiastically embraced by the city’s business and political establishment.

“We’re a changing city,” says developer Christopher Jenkins, a member of the museum’s board of trustees and chair of the building committee. “I have not heard anyone say, ‘Oh, that’s not us. It’s too modern.’ In fact, it’s a source of beaming pride.” 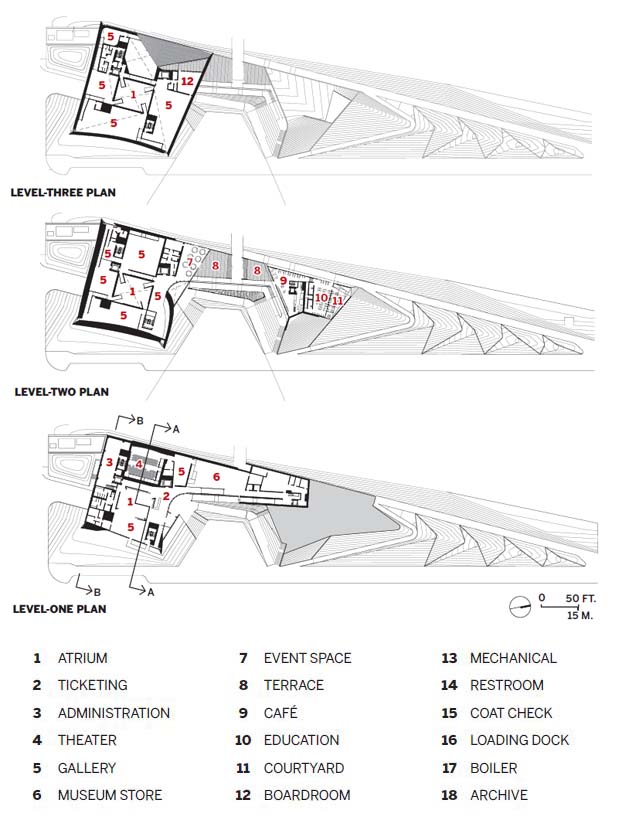 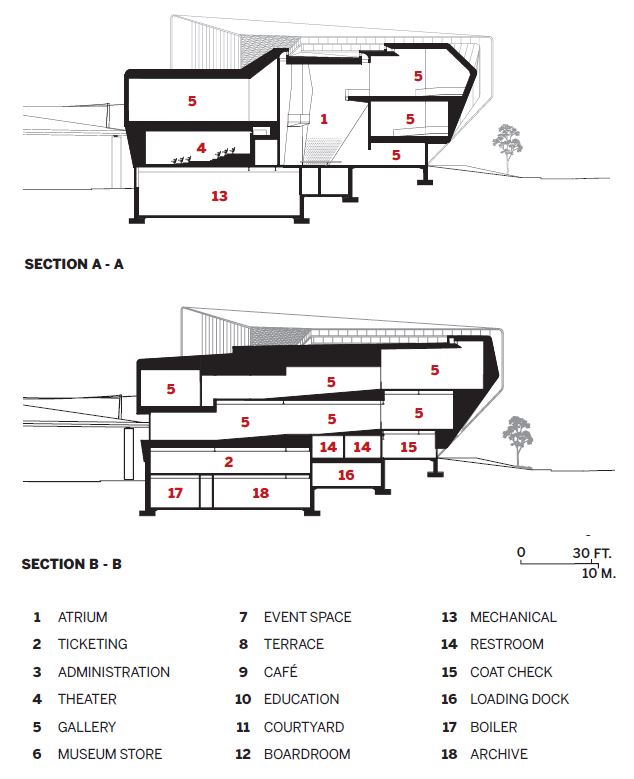