When Curtis (Curt) J. Moody, FAIA, opened his own office in his hometown, Columbus, Ohio, in 1982, he was fulfilling a long-held dream of establishing a minority-owned architecture firm. The following year, he teamed up with another Black-owned business, the engineering firm Howard E. Nolan & Associates, to create Moody Nolan.

Today, Moody Nolan is the largest Black-owned architecture firm in the U.S., with 230 employees in 11 offices around the country. (It ranked 57th on Architectural Record’s 2020 list.) The office’s demographic mix is 40 percent female and 21 percent Black (nationally, only 2 percent of licensed architects are African American). Its buildings, many of which employ a modern vocabulary with angular forms and an abundant use of daylight, are designed for a client base that includes civic, corporate, education, health-care, hospitality, residential, and sports and recreation sectors. In January of this year, Curt’s son Jonathan Moody, AIA, who joined the firm in 2011, was named its CEO; Curt became chairman of the board.

Curt became interested in architecture as a teenager, but a school counselor told him he should become a draftsman, because there were no Black architects. An athletic coach said that his grades weren’t good enough to pursue architecture, but Curt proved him wrong. He studied architecture and city planning at Ohio State University, graduating with a B.S. in 1973. He did not get a master’s degree, so he worked for local firms for nine years before taking the licensing exam and going out on his own. His mission was “to do projects the size of the firms I had worked for, as the lead firm, unlike most minority-owned firms,” which, he adds, “were criticized for being too dependent on government agencies. We developed a portfolio of private-sector projects.”

Of course, Jonathan Moody grew up around architecture. He got his B.Arch. at Cornell in 2007, earned a master’s degree a year later from UCLA, and then spent three more years in Los Angeles, working at the Yazdani Studio of CannonDesign before joining Moody Nolan. “I let the group know early on that Jonathan would eventually replace me,” Curt says. “What I didn’t know is that we’d be able to work together, and work on the transition of leadership.”

Jonathan notes that today “there are more people who understand the inequities” Black architects have endured. “We’re in the conversation, as opposed to being talked about as if we were in the other room.” Still, he says, “how far to push is always an issue.” Curt bemoans the fact that the percentage of Black architects is still where it was 50 years ago. “We’re seeing some increased level of diversity at the client level,” he adds, “but we have to consider whether a client will receive us in the professional way we want to be received. Our firm’s history helps.”

Moody Nolan’s emphasis on diversity has paid off. Curt says, “More minority firms have come out of our office than out of any other firm” in Columbus. Jonathan recalls that he and his father, speaking at a National Organization of Minority Architects (NOMA) seminar last January, met a Black architecture student who was reluctant to enter the profession, since it doesn’t welcome students like him. But after hearing the two men speak, the student changed his mind. Young people, Jonathan adds, “should not leave their voices behind.” 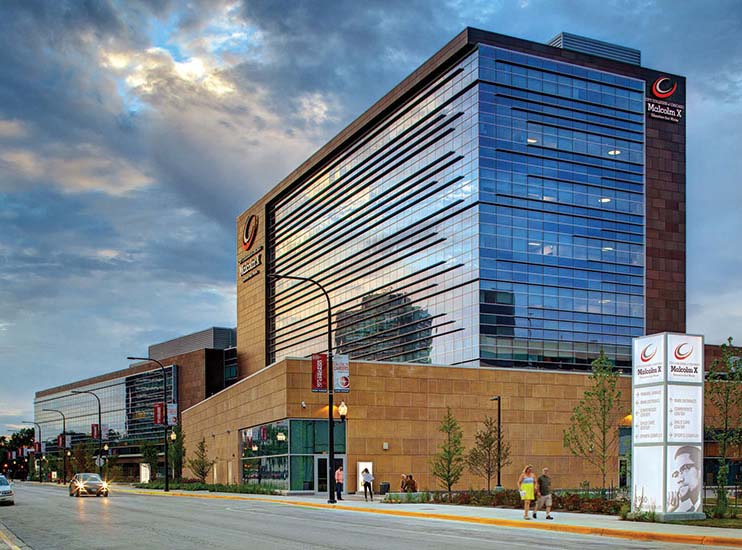 The Malcolm X College & School of Health Sciences (2016) is located on Chicago’s near west side. Photo © Sam Brown, click to enlarge.

Among Moody Nolan’s recent projects that serve minority communities is the 545,000-square-foot Malcolm X College and School of Health Sciences in Chicago (2016), which provides learning and support spaces for future health professionals. Moody Nolan was the architect of record, with associate architects Tilton Kelly + Bell, and programming and exterior schematic design by CannonDesign. “We were the first African-American firm to lead a project of that size in Illinois,” Curt notes.

In addition, the firm’s Martin Luther King Branch Library in Columbus (2018) provides 18,000 square feet of library space, serves as a community center and gathering spot, and offers much-needed Internet access to an underserved part of the city. 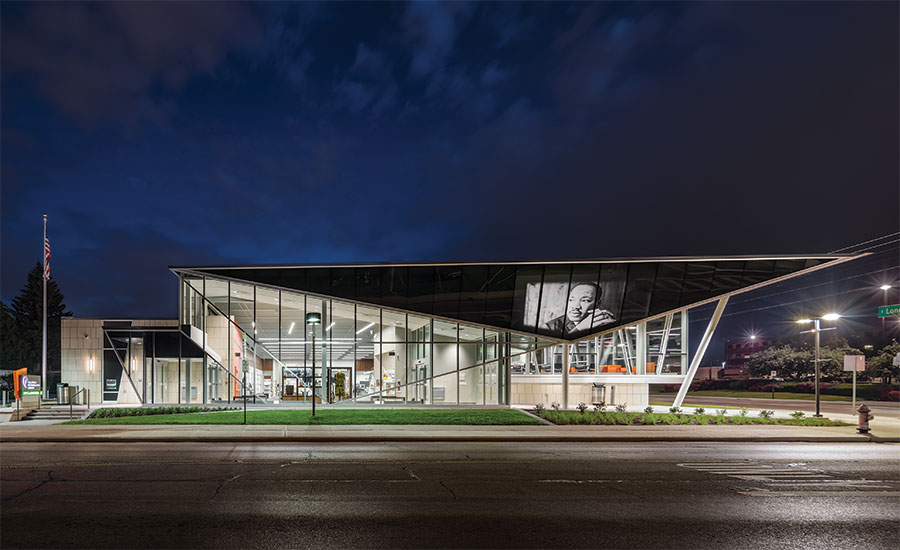 The Martin Luther King Branch (2018) is a dynamic addition to the Columbus Metropolitan Library in Ohio. Photo © Jason Keen 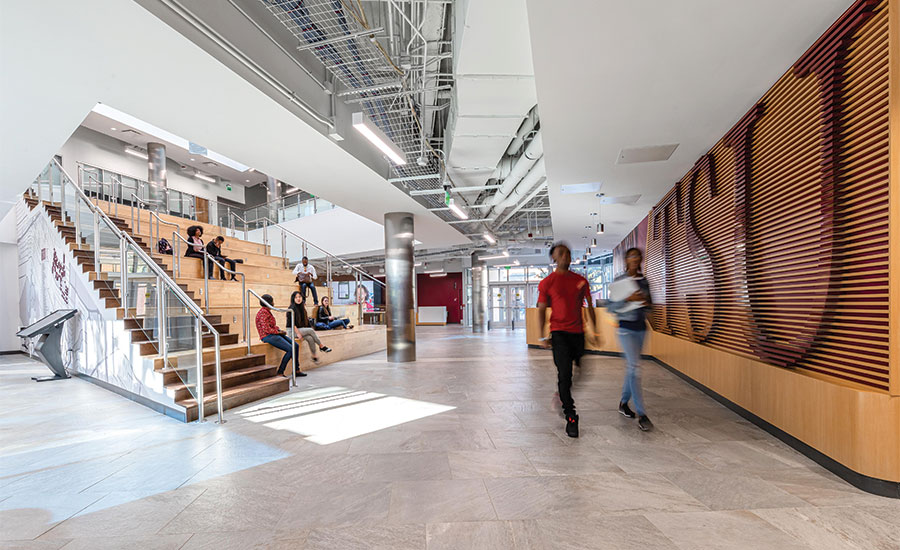 The Texas Southern University Library and Learning Center in Houston (2019) is a 137,000-square-foot library at a historically Black university that had not, Curt says, “been getting high-quality design. We wanted to do something for a growing institution.” 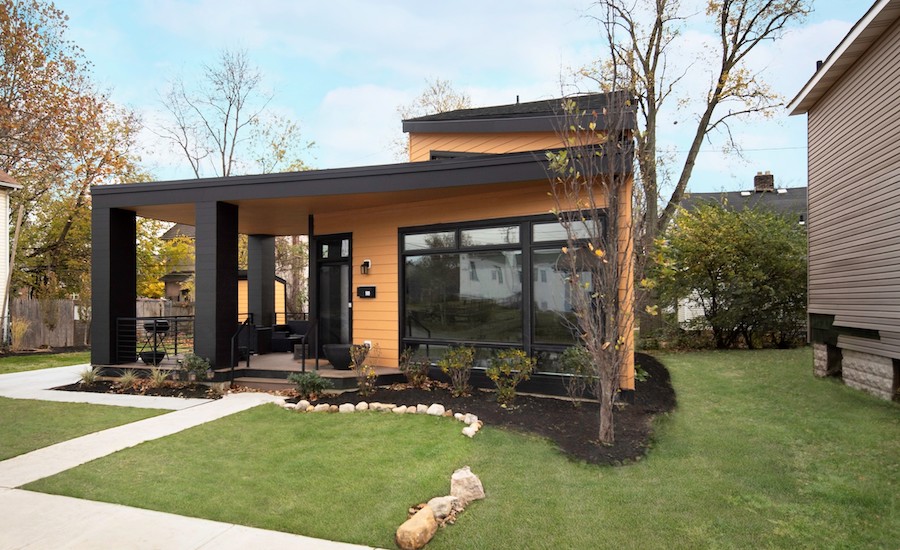 One of the firm’s most interesting projects is small in size but big in impact: the Legacy House in Columbus (2019). Moody Nolan bought the land, built and furnished the 750-square-foot, three-bedroom house, and turned the mortgage-free deed over to a family chosen by a local agency. The firm plans to build a similar house in every city where it has an office; one in Nashville broke ground this year, and another will be built in Chicago next year. As Curt Moody explains, “We wanted to do something for someone who could never return the favor.”