This website requires certain cookies to work and uses other cookies to help you have the best experience. By visiting this website, certain cookies have already been set, which you may delete and block. By closing this message or continuing to use our site, you agree to the use of cookies. Visit our updated privacy and cookie policy to learn more.
Home » The New St. Pete Pier by Rogers Partners
ProjectsBuildings by TypePark & Public Space Design

Once a haven for retirees and resort-goers, St. Petersburg, Florida— “St. Pete” to locals—has undergone a cultural and demographic renaissance in recent years. Today, bars, restaurants, and museums pepper the downtown shoreline, attracting younger residents and visitors of all ages. And now a new St. Pete Pier extends this lively scene farther into Tampa Bay.

The 12-acre public pier, designed by Rogers Partners, ASD | SKY, and Ken Smith Workshop, is a $56 million modern revision of a local landmark meant for a new generation, as part of a larger 26-acre Pier District redevelopment project. 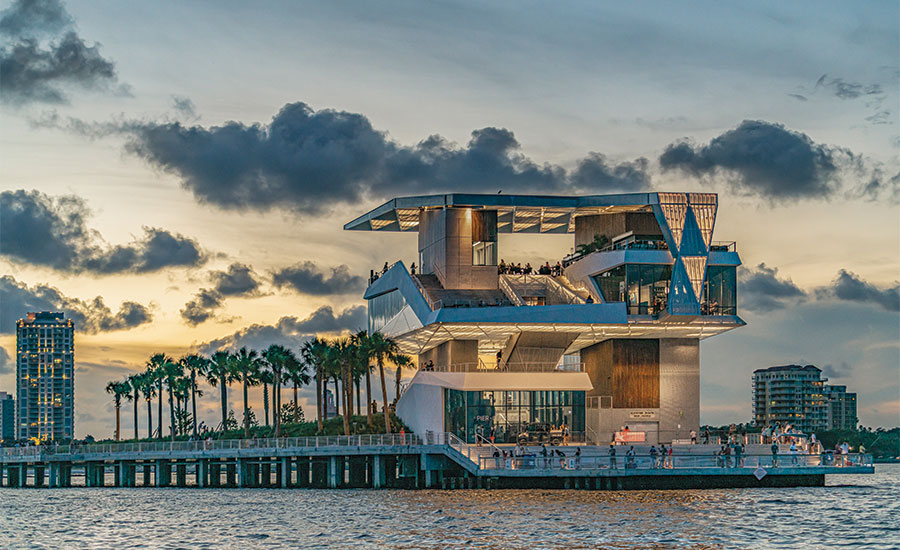 Its predecessor, built in 1973 (though the very first iteration here dates back to 1889), was a car-friendly boardwalk that culminated in a controversial inverted-pyramid building with a restaurant at the top and shops below. But by 2004, its worn-out piles were no longer sound. So the structure was demolished seven years ago, and the city launched a design competition allowing the public to decide the future of the site. A scheme by Michael Maltzan Architecture was selected by a committee, but voters rejected it in 2013. After a new competition, the committee chose a scheme by Rogers Partners, which the public approved. (Separately, W Architecture and local firm Wannamacher Jensen were chosen to design a 14-acre project on the western portion of the site, to include public art displays, a marketplace, parking lot, and access to the existing marina.) 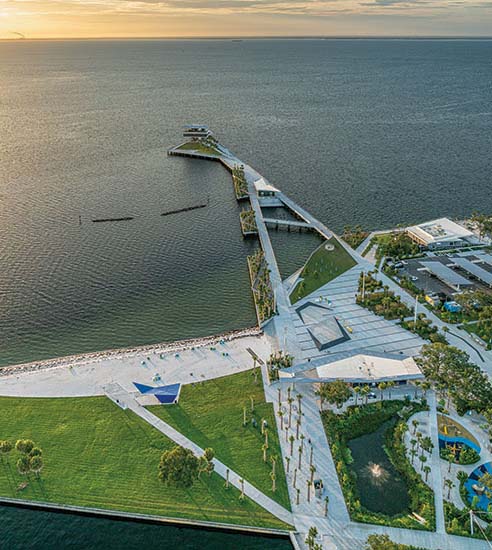 The Rogers team learned from the public’s pushback against Maltzan’s scheme, which was criticized for being too similar to the old pier. “There were certain commonalities between the initial winning competition entry and the inverted-pyramid design,” says Elizabeth Stoel, associate partner at New York– and Houston-based Rogers Partners. “It was a long walk, with no shade, and no places to stop along the way.”

The failed competition plan “really made us listen to the community,” says associate partner Vince Lee. The “green necklace” of public coastline along the downtown is what makes St. Pete so special, the architects realized, not just the pier as an isolated attraction. “It made us look at the new pier in a completely different light, as an extension of that park system,” says Lee, with programs, and topography, that are much more varied than a traditional boardwalk. The firm’s founding partner, Rob Rogers, calls this “the multiplicity versus the singularity.” 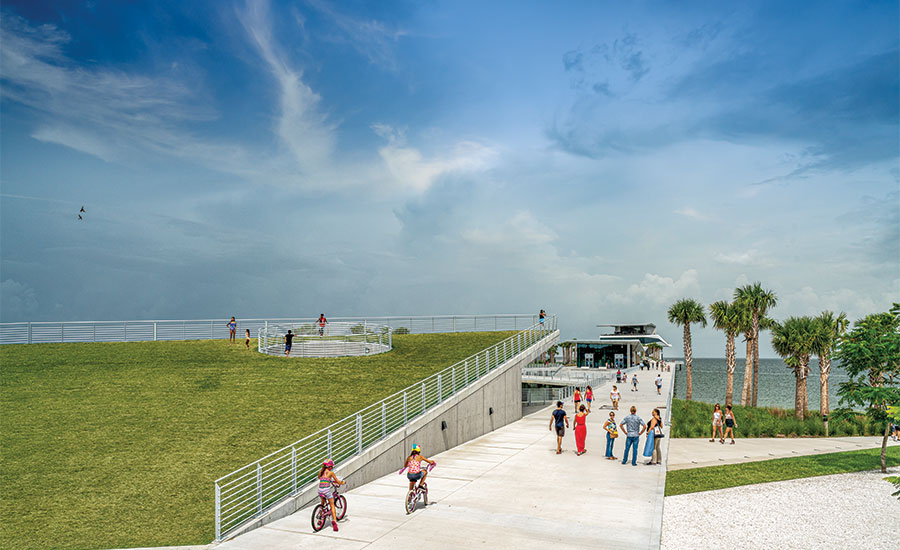 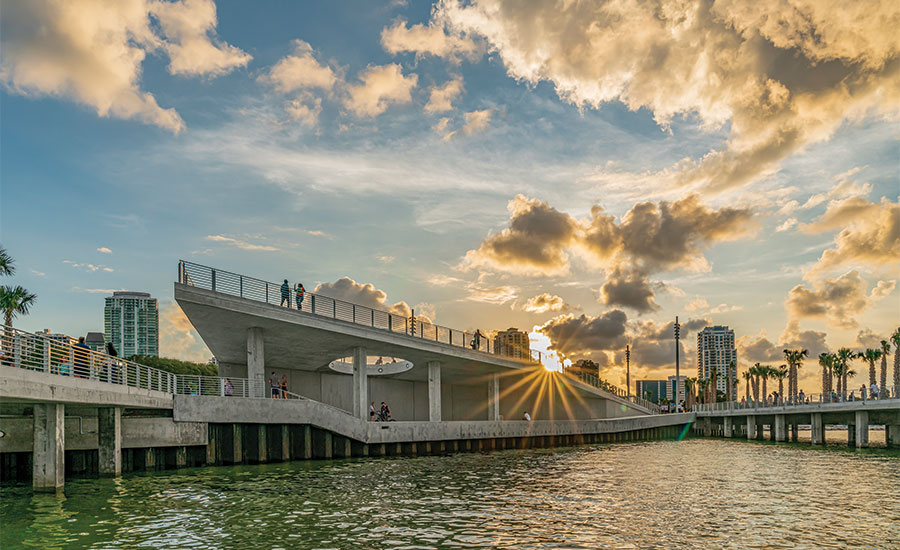 On the east side of the central plaza—where the Rogers-team design begins—a tilted lawn (1) creates an oculus-lit grotto on the pathway below (2). Photos © Rich Montalbano

The architects opted to make the entire project pedestrian-only, except for trams for accessibility. At the intersection of the Rogers-led scheme and the one by W Architecture, a central plaza extends north into “spa beach,” where a new breakwater creates protected areas for swimmers and helps prevent erosion. From the plaza, visitors can explore a 10,000- square-foot triangular “tilted lawn,” a grass-planted concrete structure that slants slightly upward, forming a viewing platform for the pierhead beyond. This feature, says New York–based landscape architect Ken Smith, “strategically and aesthetically” breaks the pier into shorter stretches. “If it were flat from land to pierhead, it would feel like an interminable distance.”

These moves also establish destinations along the length of the pier, not just at the end point. “We took something that was fundamentally a horizontal experience,” says Lee, “and gave it topography that allows you to have all of these different relationships to the landscape and the water.” The varied plan promises new possibilities with each visit, whether that’s a short jog around the perimeter or an hours-long exploration of all the pier’s touch points. 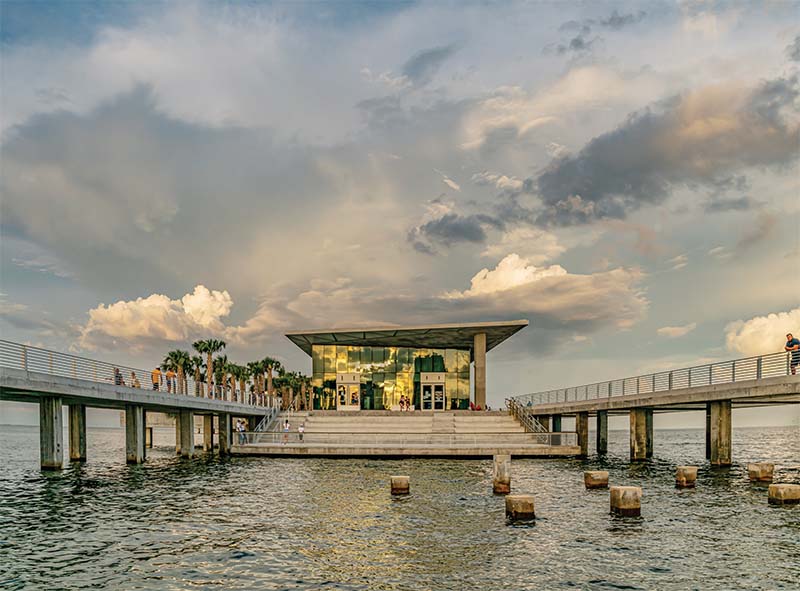 Outside the education center, amphitheater steps descend to the waterline, where visitors can observe natural marine habitat on the former pier’s piles. Photo © Rich Montalbano

The completed project includes three buildings by Rogers Partners—a casual dining pavilion, an education center, and the five-level St. Pete Pierhead, with restaurants, retail, and a rooftop bar. The new pier stands significantly higher than the previous iteration, in anticipation of storm surges and rising sea levels. While most of the old structural components were removed, a series of concrete piles in what Rogers refers to as the “wet classroom” were maintained as part of an outdoor learning experience run by the local environmental nonprofit Tampa Bay Watch. Here, the cast-in-place-concrete pier deck steps down like an amphitheater just above the waterline, providing an intimate experience with the bay, adjacent to the environmental education building. “Over time, habitats develop on those piles,” explains Lee. “We thought that that would be an interesting overlay,” to have these natural ecosystems on display at the education center. The designers also preserved four caissons that once supported the inverted pyramid building and now hold up a fishing deck at the pier’s farthest point.

One critical move, according to Rogers, was rotating the new 18,000-square-foot Pierhead building slightly so that it also looks toward the downtown skyline, instead of only “dead west” into the piercing sunset over the water. The concrete structure has generous perforated metal canopies that provide shade during the day and gently diffuse recessed lighting at night. The motif of deep overhangs on the pier’s structures, Rogers says, are “an homage to the modernist Florida tradition.”

The Pier today blends the city’s vibrant downtown with Florida’s natural beauty. As Rogers himself puts it, the finished experience is a “spectacle” on the water, where the city meets the bay. 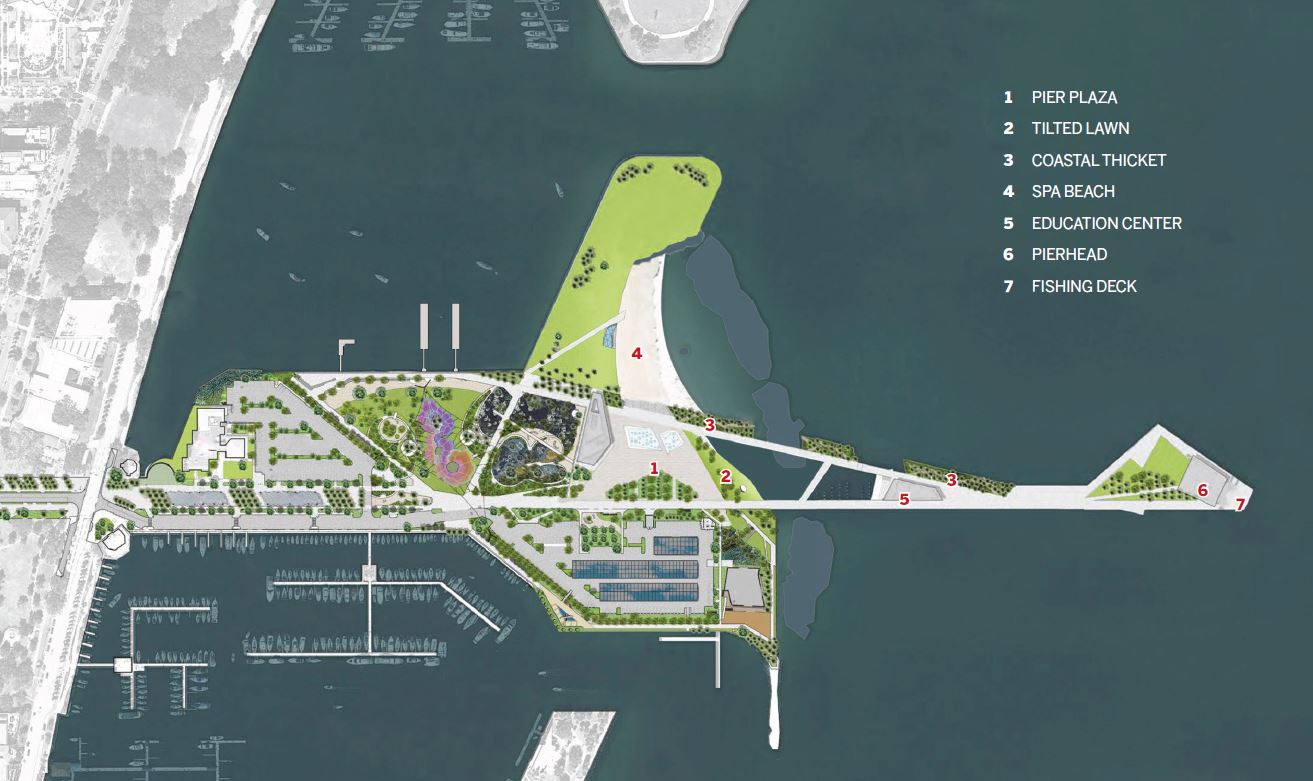