Uber drivers have trouble finding it. Passersby often don’t know what it is. With a low profile and blind facade onto the street in an affluent area of Santiago where large estates have been replaced by commercial buildings and high-rises, one would hardly guess these modest wood boxes comprise a new housing development. Its architect, Cristián Izquierdo, a 2020 Design Vanguard, admits to playing with people’s expectations, and wanting his buildings to be appreciated as something different. But the project’s response to site restrictions, and its ingenious layout and impeccable detailing make it so much more. 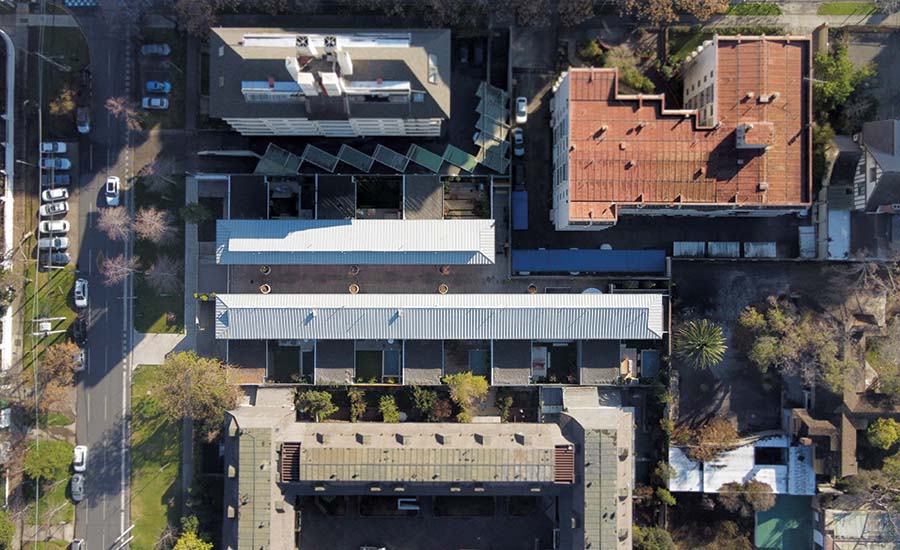 Set amid much larger buildings, the two linear structures contain eight units, each with its own courtyard, on either side of a gated pedestrian alley. Photo © Pablo Casals Aguirre

Zoning regulations change radically from this plot to the one next door, limiting the height and buildable area of Izquierdo’s project, which he undertook with his contractor brother. To make the venture financially viable, they found prospective residents, who gave input on the design, and together all of them purchased the pricey but difficult parcel, which had sat empty for years. Building to capacity, Izquierdo developed eight nearly identical units, each roughly 2,750 square feet, in an arrangement that is both familiar and completely new.

In Spanish tradition, houses are often designed around a courtyard, or patio, so the courtyard typology is one that is ubiquitous in Chile and rooted in its culture. Here, however, Izquierdo combines it with another typology more commonly associated with working-class accommodations in Santiago from the early 20th century: Cité housing, as it is known, was designed with narrow row buildings facing onto a pedestrian street to take advantage of natural light and ventilation. Extant examples in the city are scarce and often in bad condition, though some have now become popular living quarters among hipsters. 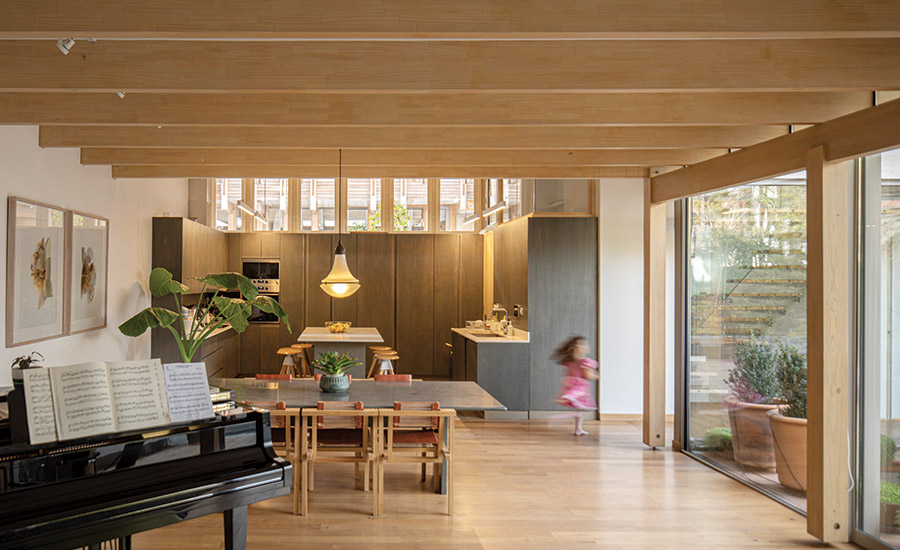 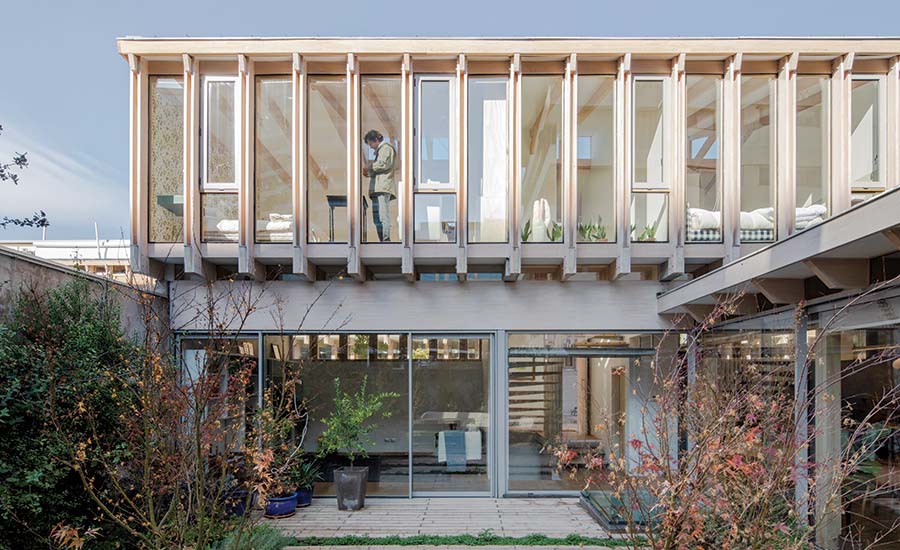 Taking “the best of both” typologies, as he says, Izquierdo designed two bars—the shorter, north one containing three units, the longer bar to the south, five—around a 23-foot-wide gated pedestrian alley accessible only to residents. The floor plans of the units are mirrored across the alley, where the main entrance steps down nearly 2 feet into each unit. An expansive L-shaped living area surrounding a private walled courtyard on the ground floor transitions to a linear structure on the upper level, where bedrooms are arranged in sequence. A basement provides parking and additional space for an office or workshop, daylit from the courtyard above. 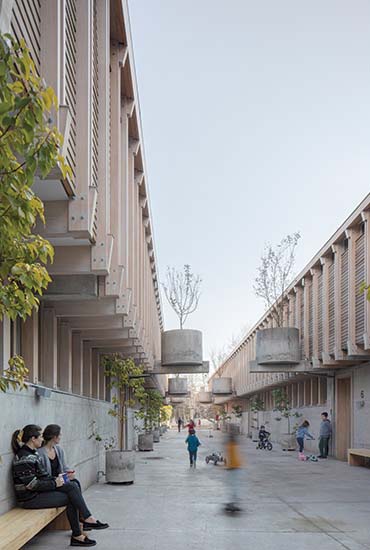 Wanting the pedestrian alley to be as green as possible while leaving space for children to play, the architect located large planters overhead. Photo © Pablo Casals Aguirre

Though combining typologies gives the project the aspect of collage, Izquierdo wanted to maintain a single structure. “Formally, it appears continuous,” he says. “But the individual spaces each have a different quality.” The material of choice for this project—and almost all of the single-family residences the young architect has designed before it—is wood. “This will be the leitmotif of my career,” he jokes.

While Izquierdo is attracted to both the haptic and sustainable qualities of wood, his interest in the natural material also has to do with his interest in architectural joinery, and creating a building made of many small parts. “The relationship of elements is more important than the element itself,” he says. “There is a balance between columns and beams here that is related to classical architecture.” The structure consists mainly of laminated pine, which also serves as the interior finish in combination with painted plasterboard, but concealed steel joints and concrete walls provide additional support in this earthquake-prone country. A prefabricated wood beam with steel diagonals running east–west in the roof of each linear, gabled 21-foot-high structure takes seismic loads along that axis.

The exterior is clad in shingles of alerce, a type of cypress that doesn’t need maintenance. The individual boards were affixed with six custom-designed screw attachments, a time-consuming process that required skilled handiwork. The blind facades on the street and over the pedestrian alley, which are covered so prominently in this uncommon wood, open up to walls of glass facing the courtyards.

Izquierdo did well to draw on precedents and integrate tenets of classical architecture, but he also did something completely startling by suspending planters in the pedestrian alley, 9 feet above the entrance of the units. Four feet in diameter, the pots are planted with Japanese maple and rest on concrete beams projecting 5 feet from the building envelope. “I wanted the alley to be very green without impeding the children’s play,” says Izquierdo, who also planted climbing jasmine to grow on the walls. “Without the trees and plants, the buildings would be too monumental.” Instead, the greenery—and the unexpected way some of it is inserted—is a whimsical counterpoint to the formal continuity the architect so desired. 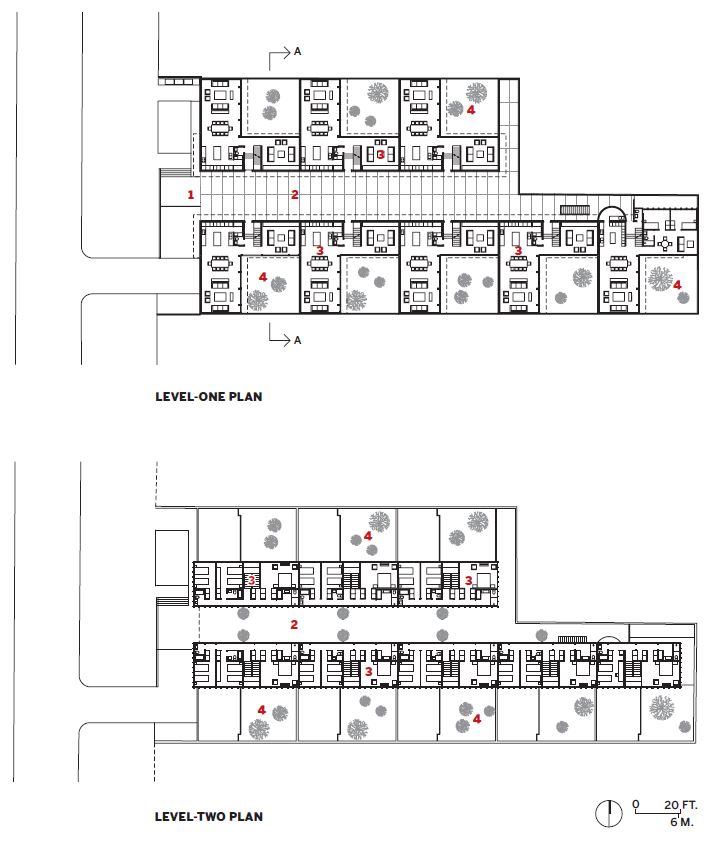 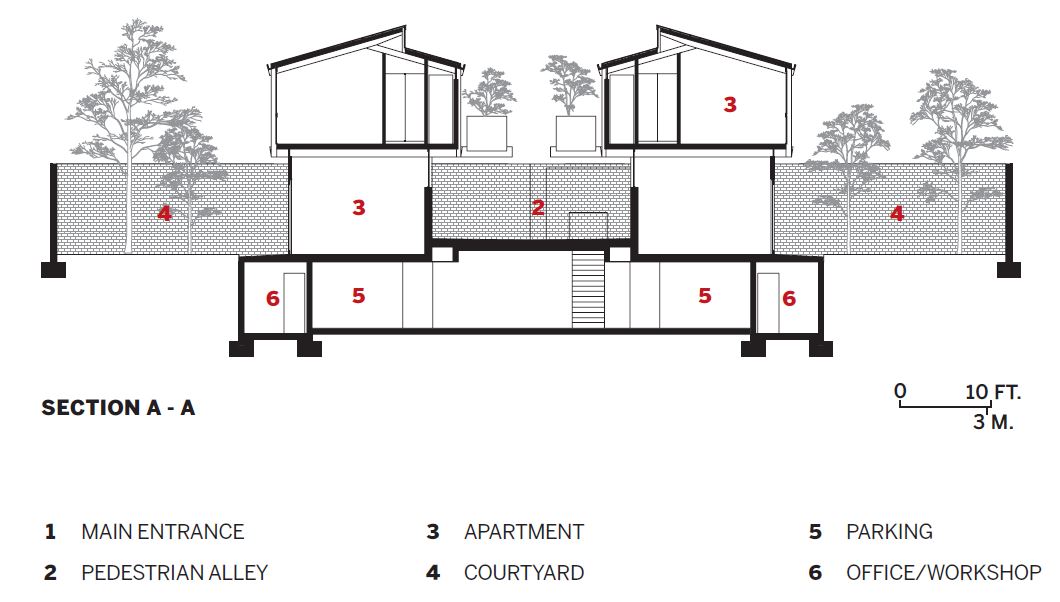 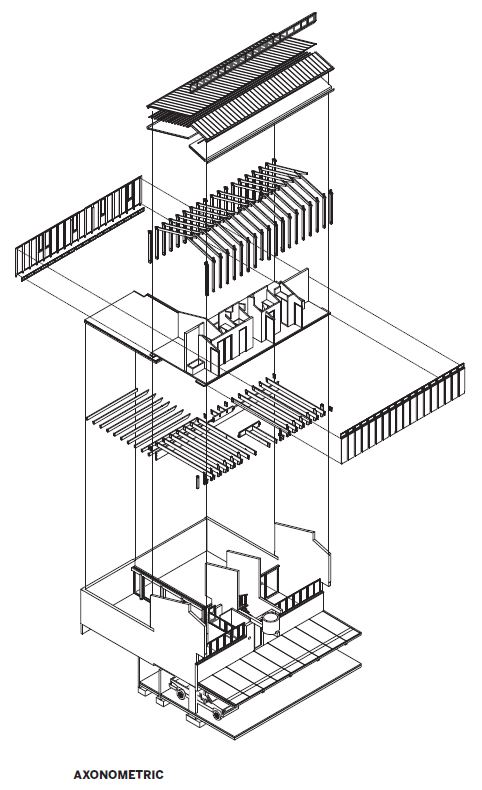