This website requires certain cookies to work and uses other cookies to help you have the best experience. By visiting this website, certain cookies have already been set, which you may delete and block. By closing this message or continuing to use our site, you agree to the use of cookies. Visit our updated privacy and cookie policy to learn more.
Home » Tsai Center for Innovative Thinking at Yale by Weiss/Manfredi
ProjectsBuildings by TypeCollege and University Projects

Tsai Center for Innovative Thinking at Yale by Weiss/Manfredi

Sheltered within the quadrangles of Neo-Gothic buildings for which Yale University is famous is a collection of lushly appointed garden courtyards, from the grand to the intimate, that also have put their indelible stamp on the school’s legacy. But, until recently, one ugly stepchild on the New Haven, Connecticut, campus lurked in the shadows, largely ignored: a windswept, concrete-paved crevice. Now this space has been transformed, with the arrival of a diminutive elliptical innovation hub designed by New York–based Weiss/Manfredi Architecture/Landscape/Urbanism that invigorates its dreary surroundings with its rippling glass facade and a spirit of optimism. 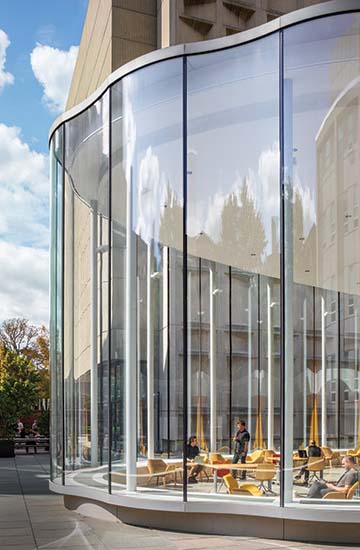 The building is the gift of alumnus Joseph Tsai, cofounder of the Alibaba Group, to house the Tsai Center for Innovative Thinking at Yale, a hub for cross-disciplinary programs and mentorship. The neglected courtyard is hemmed in by the back sides of masonry, concrete, and metal-paneled academic facilities, built across a century, from the soaring Collegiate Gothic Sheffield-Sterling-Strathcona Hall to Dunham Laboratory’s modernist addition and Marcel Breuer’s Brutalist Becton Engineering and Applied Science Center. The architects saw the potential to rescue this leftover space and began an investigation to “claim the identity of the courtyard as a wonderful landscape destination,” says firm cofounder Marion Weiss.

In activating this dead zone, the university wanted the new structure to be visible through the gap between Sheffield and Becton that leads to a prominent street, Prospect. “Given the constraints of the passages, the idiosyncratic nature of all the buildings, that set of crazy geometries and sectional grade changes,” says Weiss, “what emerged was the need to be open and welcome and transparent from all sides. The oval glass prism became the most salient and flexible solution—a little Tempietto.” Equally important, adds cofounder Michael Manfredi, was the circulation between the courtyard and the rest of campus: “How people move through that space became a definer.” 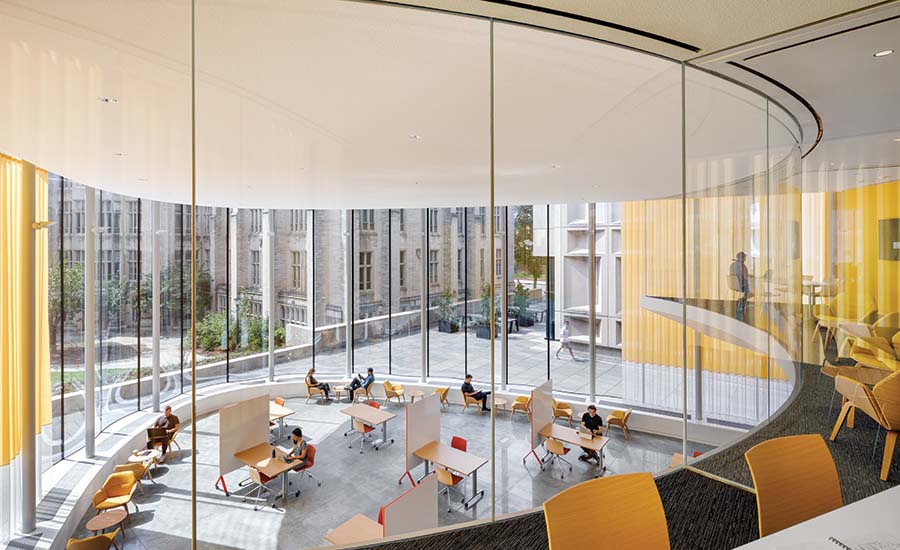 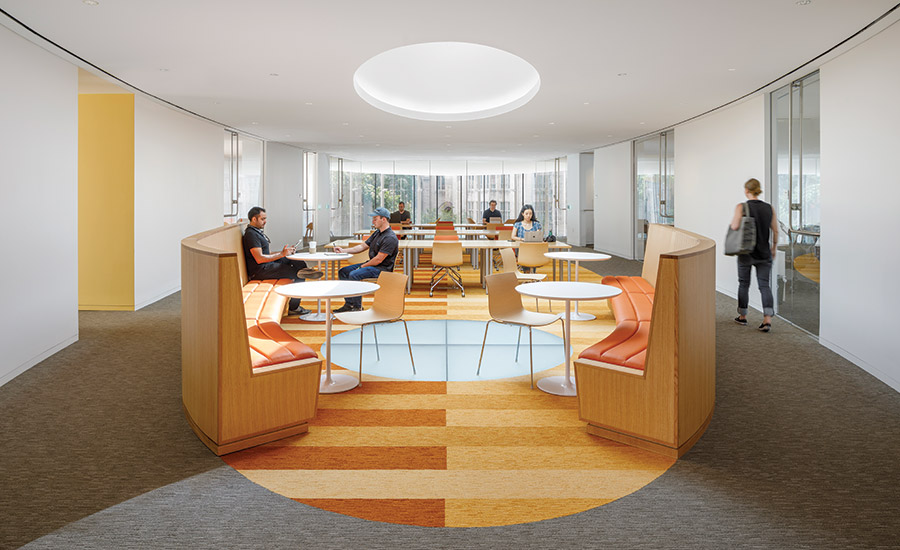 The team chose glass, to spark a conversation with the looming opaque buildings and quiet the cacophony. The 22-foot-high panels are installed with alternating convex and concave curves that provide lateral stability, eliminating the need for mullions or girts, and give the building a scalloped edge where it meets the sky. The team worked with consultant Front, experimenting with different radii, and settled on the current one because it enabled the desired height without distortion, was cost-effective, and was a dimension that was readily shippable from its manufacturer in China. The softness and fluidity of the glass is a foil to the sternness of the surrounding forms and, with its reflections—particularly that of Becton’s sculptural-relief facade—presents a funhouse version of the neighboring buildings. “The nuttiness of the transformation of surfaces through its reflection makes you pause and see things in a different way,” notes Weiss.

The 11,200-square-foot Tsai CITY, as it is known, sits atop a raised portion of the courtyard that houses Becton’s auditorium and a lab below. The team positioned the building so that its slender steel pipe columns, which support a ring beam, hit as many points as possible on the existing grid of concrete beams supporting the plaza, thus distributing the load and obviating the need to shore up the original structure. The building is so light, says project manager Mike Harshman, it had to be braced and pinned down to prevent wind uplift.

Inside, the two-story building is bright and airy. Open, flexible workspaces at the center of both the main level and the mezzanine are flanked by meeting rooms and offices, providing a variety of environments for both collaborative and focused work. Polished concrete floors and spare, movable furnishings underscore the building’s role as a creative studio, and the decision to infuse it with gold tones, instead of the predictable Yale blue, lends the center a domestic warmth. 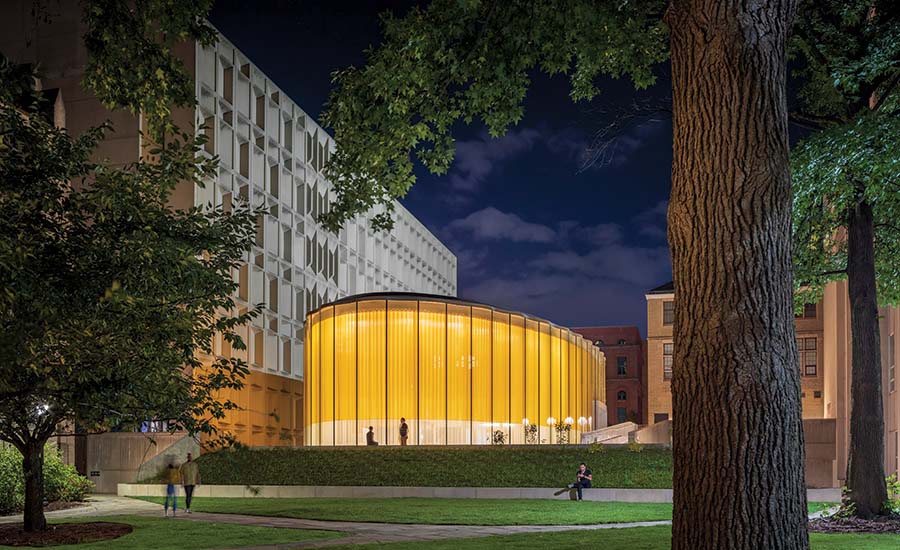 A honey-colored curtain enlivens the building, viewed here from the more established south end of the courtyard. Photo © Albert Vecerka/Esto

On track for LEED Gold certification, the Tsai center ties into the campus steam and chilled-water loop, which feeds radiant cooling and heating and trench fan coil units. The team leveraged a former conference room below grade to house the mechanicals, allowing for easy venting and short chases. To mitigate glare and heat gain, the low-E glass facades are shaded by a cheery yellow curtain automated through photocells.

Even with the center’s 7,000-square-foot footprint, the team was able to create 30 percent more landscaping by removing many of the concrete pavers. They also took out 42 inches of concrete wall that had cleaved the courtyard, and added a planted berm, with water-retention tanks beneath, to create a coherent, inviting enclave.

Of course, with the pandemic, the building as an incubator of invention has not yet been put to the test, since it has had to remain largely empty. But on a recent crisp fall afternoon, masked students carried lunch out from Becton’s café to relax on the grass in the fresh air, alongside the panoply of buildings and their reflections. Says Weiss, “A great source of pleasure for us was creating a part of the campus, not just a work of architecture.” 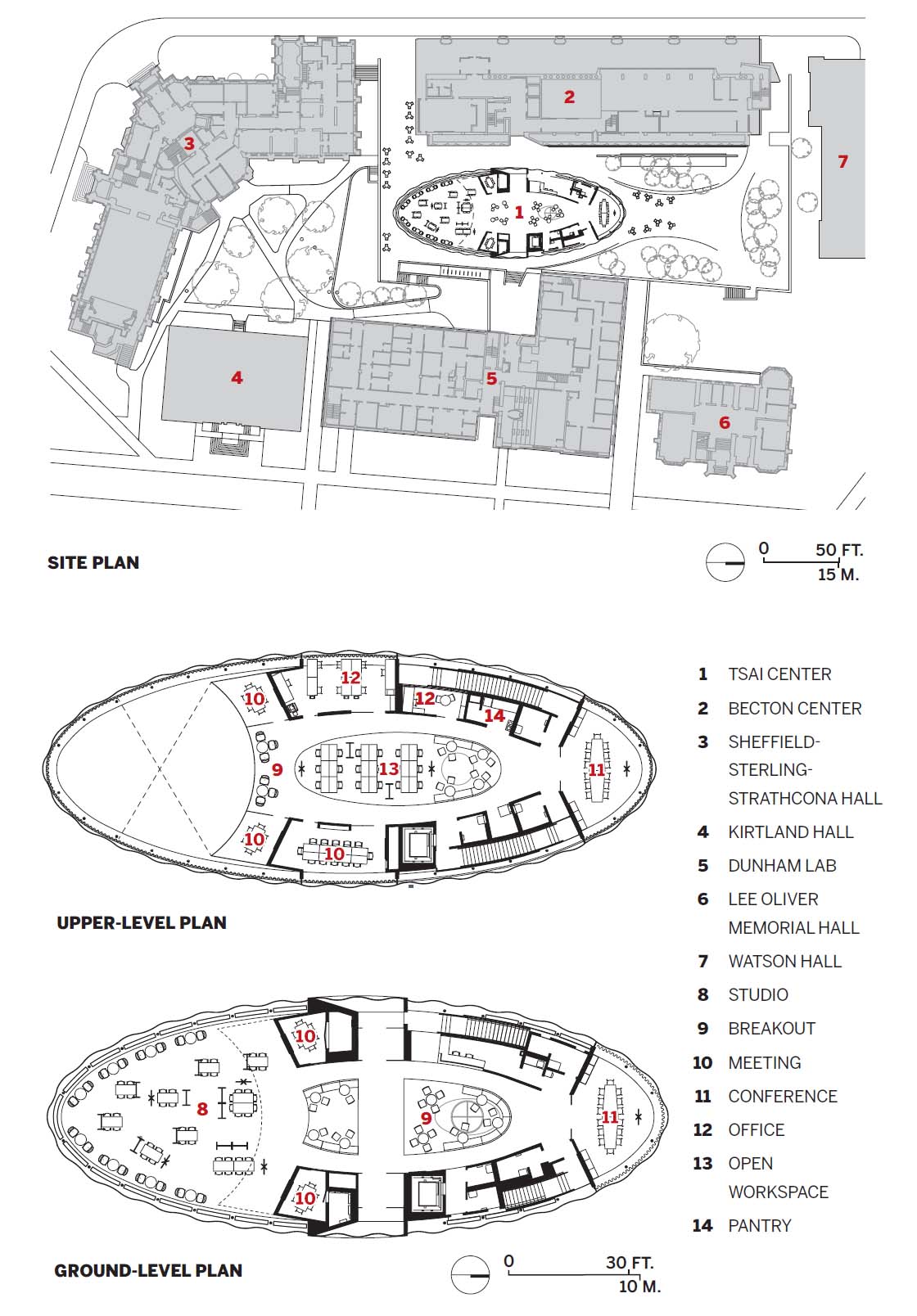 Linde Center for Music and Learning by William Rawn Associates