Woodside Building for Technology and Design at Monash University by Grimshaw

The platitude one often hears in architecture school is that the most energy-efficient building is a black box with no windows. Early Passive Houses looked not too far off that, with thick, heavily insulated walls and few openings. The design of such structures, not just houses, that have achieved this rigorous performance standard, has evolved in recent years to encompass many building types and sizes, and to feature significantly more glazing. At Monash University’s Clayton campus, just outside Melbourne, Grimshaw has completed the new Woodside Building for Technology and Design, a 215,000-square-foot, daylight-filled, Passive House–certified building that pushes the envelope in terms of aesthetics and scale, completely reimagining what the ultra-low-energy genre could look like. 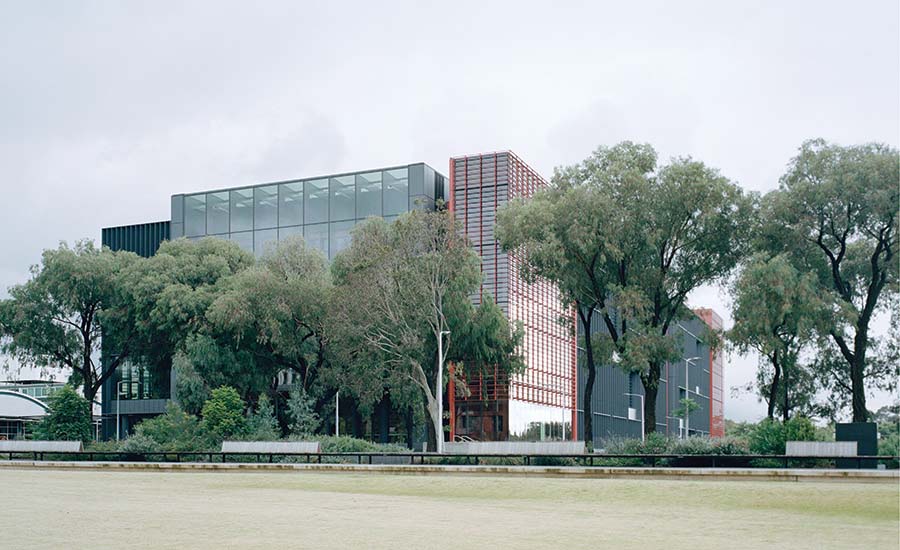 The five-story building has a steel-framed armature that is vividly expressed on the exterior (above) and interior (top). Photo © Rory Gardiner, click to enlarge.

“We went through a process of questioning all the standard solutions because they did not work for the dimensions and complexity of this kind of educational building,” says Alberto Sangiorgio, a sustainability team leader at Grimshaw. Indeed, the five-story structure’s footprint is enormous—nearly 400 feet long and 144 feet wide. Its steel frame spans diverse, acoustically isolated modules for tiered and flat-floor learning spaces, co-lab spaces, and informal breakout areas, as well as fabrication studios, virtual-reality rooms, and an auditorium that hosts more traditional lectures and industry evenings. “We needed a building where engineering and information-technology students could connect and see each other’s work, and where professors don’t just stand in the front of the room,” explains Monash Pro-Vice Chancellor (Academic) Kris Ryan. “And industry is right there with them.” Woodside, the building’s namesake and Australia’s largest producer of natural gas, is involved in research for alternative forms of energy, and, along with other companies, will be supporting research opportunities within the building. 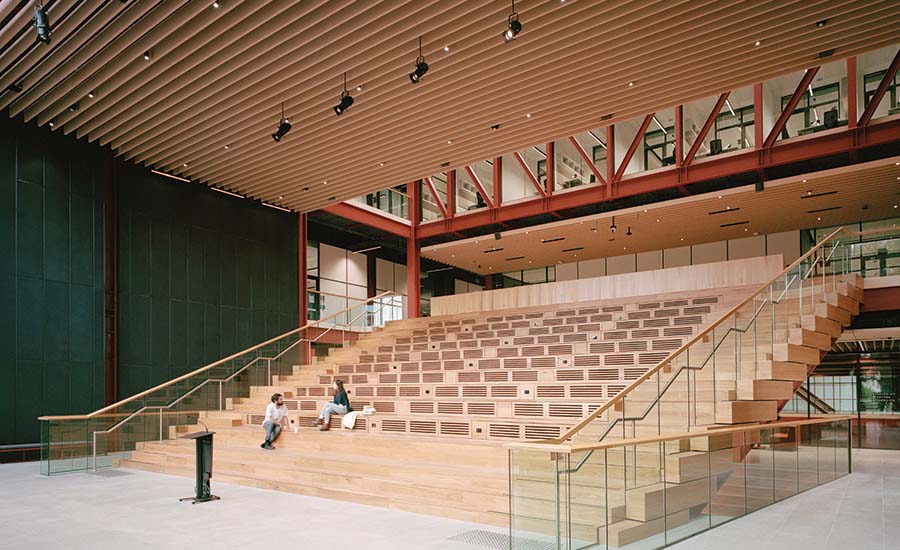 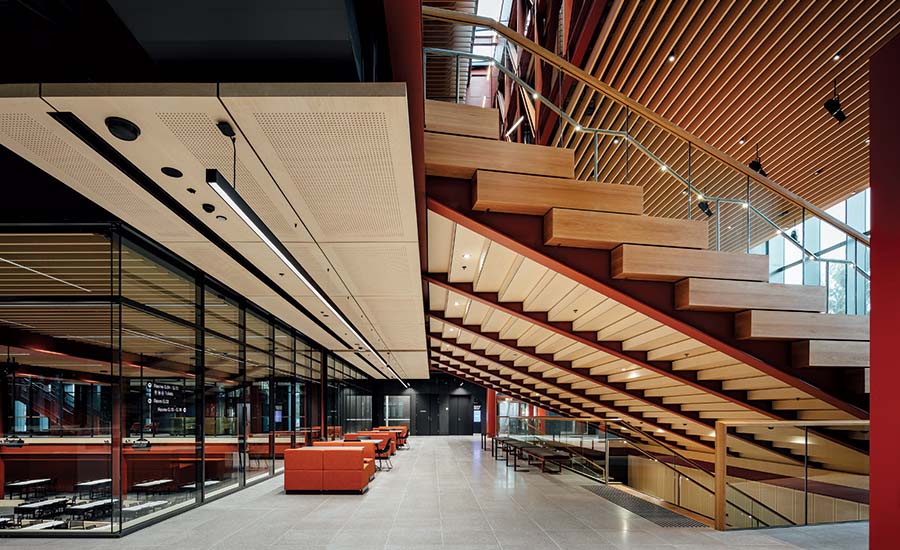 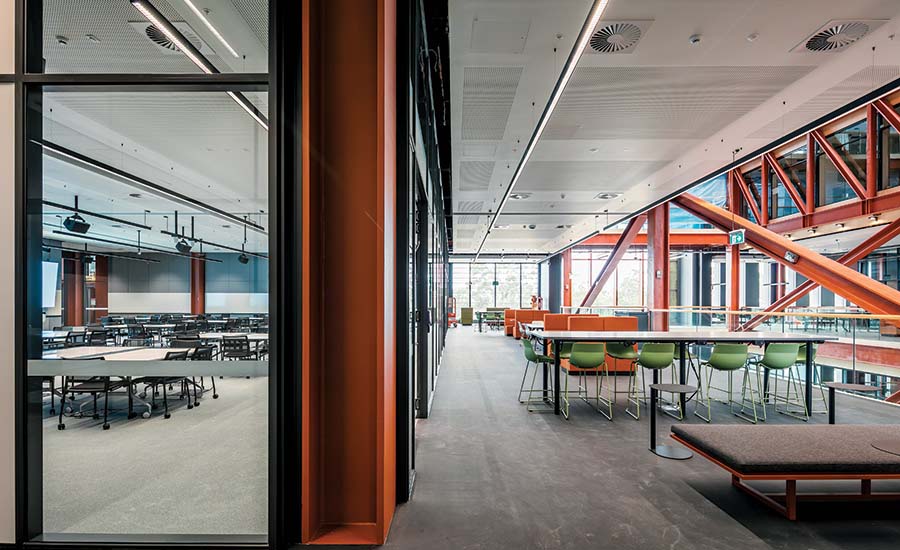 A tiered open theater connects all levels of teaching (1 & 2). Volumes are ordered within a structural frame that organizes all the activities (3). Photo 1 © Rory Gardiner, photos 2 & 3 © Michael Kai

Monash University, which has several campuses throughout Melbourne and additional locations internationally, is trying to meet its own net zero carbon emissions initiative by 2030 with a series of parallel programs covering on- and off-campus energy generation, intelligent energy networks, and net zero–ready buildings. The Woodside building, however, is only its second Passive House. Despite Australia’s mainly mild climate—giving buildings there with low heating loads an upper hand in achieving Passive House—the standard was slow to catch on in the country after being introduced in Germany 30 years ago. Of the scant 28 Passive House buildings Down Under, nearly all are small residential structures. 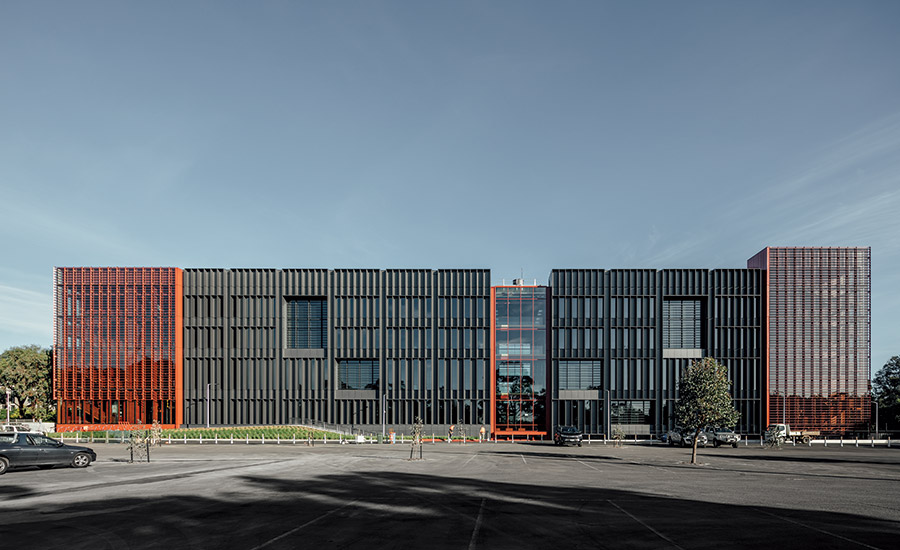 Ironically, the Woodside building’s size helped it attain its performance goals. With such a huge volume and relatively small surface area, heat escape is minimized. The more than 50,000-square-foot roof surface is covered in a photovoltaic array—the solar energy it converts to electricity contributes to the building’s energy budget. “Passive House is not about the U-value of a wall,” Sangiorgio reminds us. “It is performance based.” In fact, in this building—which operates at approximately 35 percent of the energy levels of comparable buildings targeting baseline requirements of the Australian Building Code—the mainly unitized, louvered curtain walls are equal parts solid and transparent. Double-glazed window units with an argon fill compose 50 percent of the facade overall (and are the same ones used in skylights). Spandrel panels on the roof and in the curtain walls range in size from 6 to 8 inches thick and feature standard mineral wool insulation sandwiched between steel sheets. 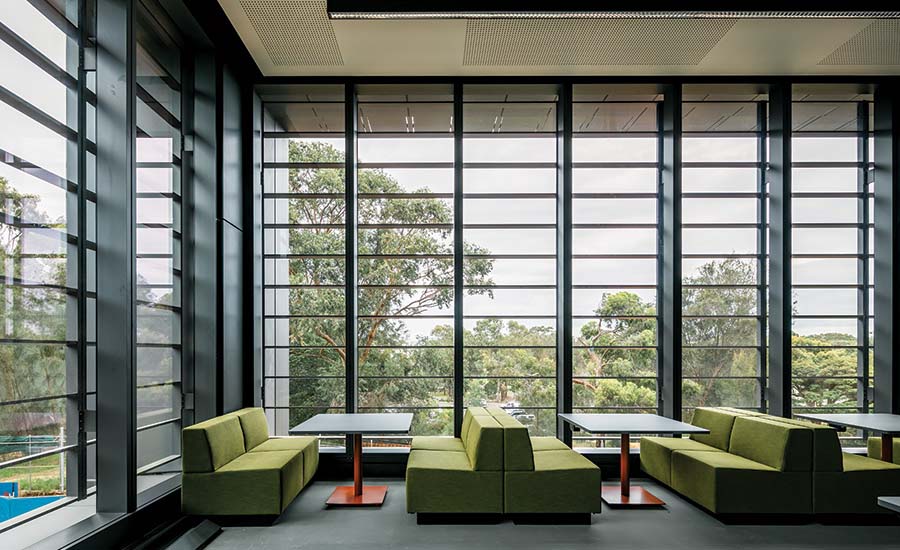 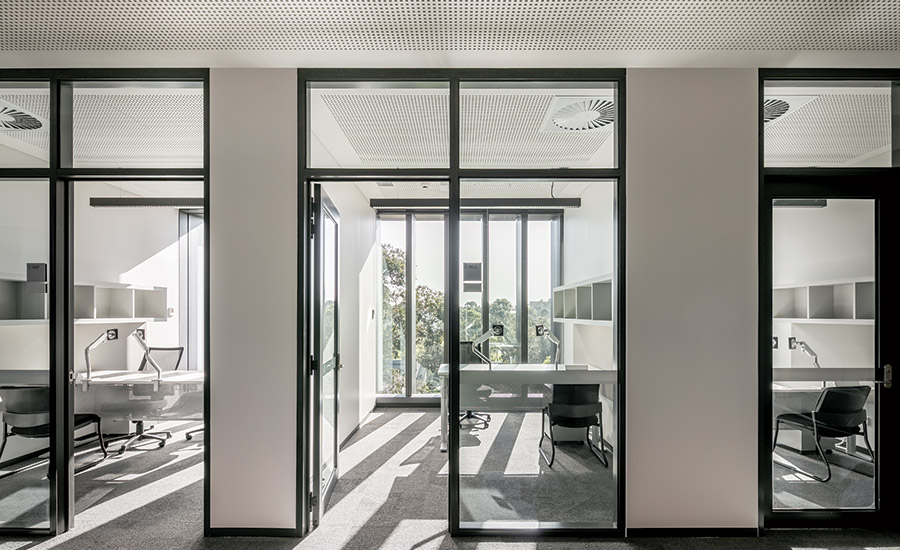 In designing this building, Grimshaw’s Sydney-based office faced many challenges, not only in meeting strict sustainablility guidelines, but in creating gracious spaces that defy previous didactic models. “There is a fundamental shift in education, and that pedagogical change leads to a typology change,” explains Andrew Cortese, the Grimshaw partner-in-charge who led the design of five earlier university buildings and what he calls a “radical experiment” for a high school. 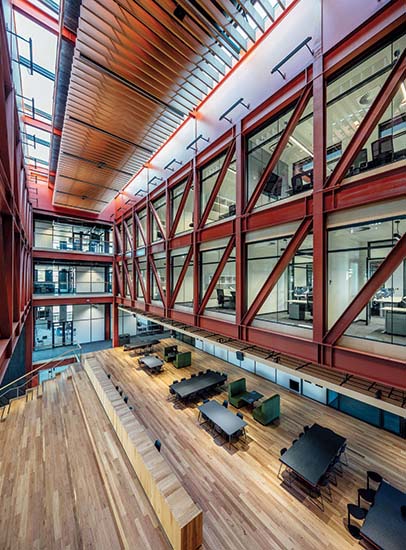 At the top of the auditorium, an informal learning space has views onto the main-floor teaching area and also looks up into the academic offices above. Photo © Michael Kai

The design team considered student comfort, giving as much access as possible to daylight throughout the structure’s deep floor plates, through the expansive skylights—beneath which are double-height study areas and research clusters suspended by large red-painted trusses that have come to define the interiors, and one full-height atrium that traverses the short side of the building toward its center. “The building’s infrastructure supports the work of the students,” says vice-chancellor Ryan. While it is easier to control solar gain in a building with a north–south orientation, Grimshaw designed the long axis to run east–west, giving the 2,000 anticipated daily occupants more of an opportunity to embrace the different seasonal and diurnal qualities of sunlight, wind, views, and shade. To minimize air infiltration, given the high volume of traffic, air locks were designed at each of the main entrances. Two sets of sliding doors positioned 15 feet apart allow people to pass through only after one set is completely closed.

The building, unfortunately, has not seen the volume of foot traffic that was expected since it was completed in March. “The saddest thing is that we were open for one day,” says Ryan. “Student learning on campus ended the next day.” When Melbourne emerges from its second wave Covid-19 lockdown, and researchers begin to occupy Woodside, what they will find is a far cry from that black, windowless box, but rather a bellwether for what the future of Passive House can be in Australia, and around the world.