In 2009, Scott Bierman, president of Beloit College, in Wisconsin, was on a run along Pleasant Street, at the western edge of the campus. “On my right,” he recalls, “was our 60-year-old field house, a surplus hangar from World War II. On my left was the Alliant Blackhawk Generating Station, which had just been decommissioned. It occurred to me that its interior might be mostly big expanses of space, and I thought, ‘Gosh, I wonder . . .’ ” The result of Bierman’s epiphany is the Powerhouse, a 120,000-square-foot student center focused on recreation and wellness, designed by Studio Gang, and completed last year at a cost of $48.5 million. 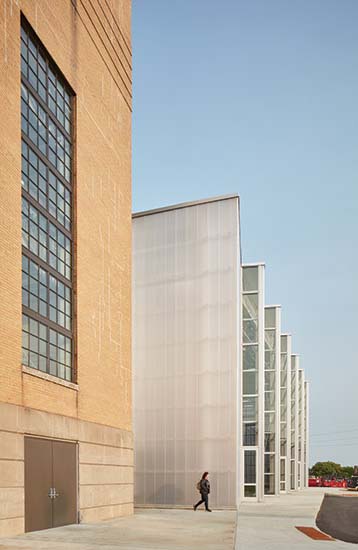 The Blackhawk Generating Station, a designated landmark, is an assemblage of three buildings, totaling 103,000 square feet, that accumulated over time. The earliest were redbrick sheds built alongside a hydroelectric dam on the Rock River in 1908 and 1928. A much larger addition of concrete and yellow brick, punctuated by tall windows and a chimney 227 feet high, was erected in two phases between 1945 and 1949, with a design by Sargent and Lundy, a Chicago engineering firm specializing in power generation and transmission. Its brooding, abstracted classicism gives it a monumental gravitas that evokes the paintings of American industrial landscapes by Charles Sheeler.

The college and its architect were in sync about the project’s goals. It had to respect the historic building’s legacy; connect to campus, city, and river; and serve the needs of athletes and non-athletes. It also had to raise the school’s profile and enhance its appeal to prospective students and their parents. “This project sits at the intersection of two things that really interest me: hybridization of program and recycling of older buildings,” says Jeanne Gang. “I’m also big on creating connections, so this was a good fit for me.” 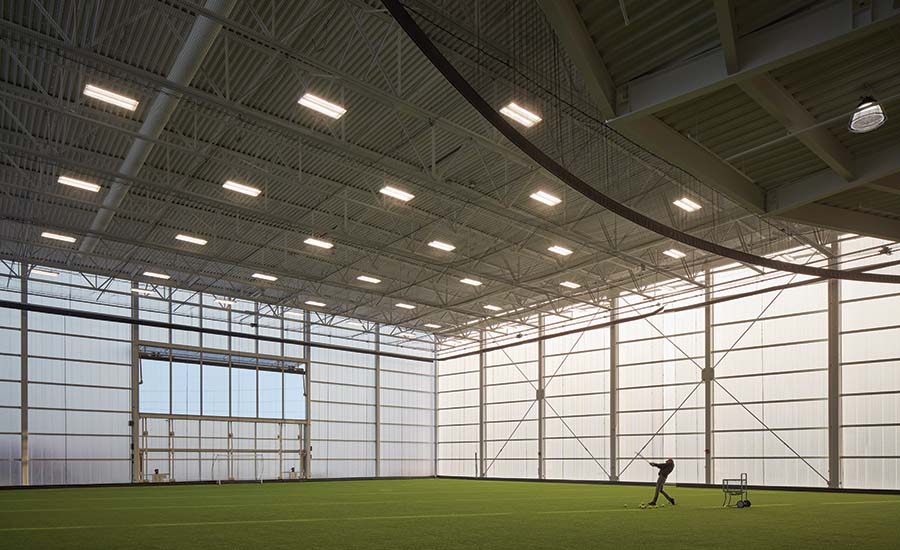 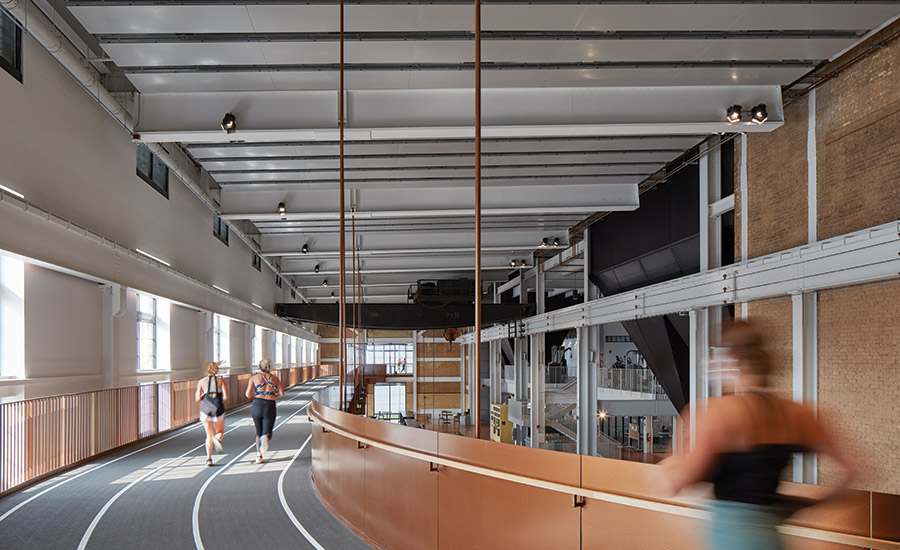 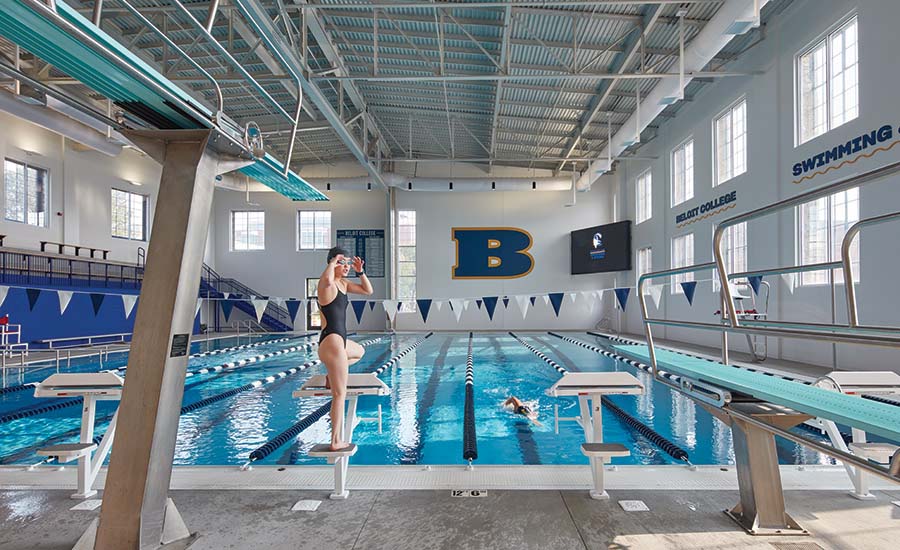 The translucent field house (1) is partially penetrated by a steel running track that loops around the turbine hall (2). At the south end of the complex is the eight-lane swimming pool (3) inserted in the 1908 building. Photos © Tom Harris

But it was not an easy fit for an old power plant, whose various expansions had different structural systems and floors that didn’t align. “It was built for machines, not people,” notes Gang. But she and her team made it work. They analyzed existing spaces to determine which ones could best accommodate major program elements. 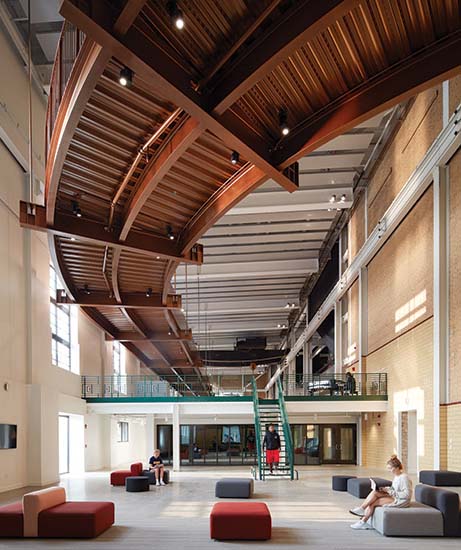 The yellow-brick and concrete structure, built from 1945 to 1947, now accommodates offices, lecture hall, and coffee bar, with a curvilinear running track looping around the mezzanine level. Photo © Tom Harris

The original 1908 building to the south offered a large lofty room well suited to an eight-lane swimming pool. The sectional organization of the 1945–47 addition led to a vertical hierarchy of spaces that begins with offices, lecture hall, and coffee bar on the ground floor; from there, a stair leads up to lounge and café areas in the high-ceilinged, lavishly fenestrated turbine hall. On a mezzanine overlooking this piano nobile is a fitness center whose running track swoops out to span its full length and penetrate the new field house to the north. (Runners with vertigo, beware.) A conference center and mechanical spaces occupy two floors above.

The field house that Gang attached on the north side is a 17,000-square-foot rectangular volume whose exterior takes cues from the repetitive vertical windows of its historic neighbor and continues that rhythm with walls that jog in a sawtooth pattern. Framed in steel, the field house is clad in 40-millimeter-thick panels of translucent polycarbonate that can withstand the impact of flying baseballs. At night, its glow is a poetic counterpoint to the opacity of the adjacent brick structure.

Interiors are enlivened by a polychrome palette inspired by finishes on utilitarian artifacts, some of which have been cleverly recycled. “Students curated things to be retained,” recalls Gang. “They walked around and told me what they thought looked cool. The original chimney has been fitted with a skylight. One of the old coal hoppers contains a seating area. I’m still hoping to use another one as a giant M&M dispenser.” 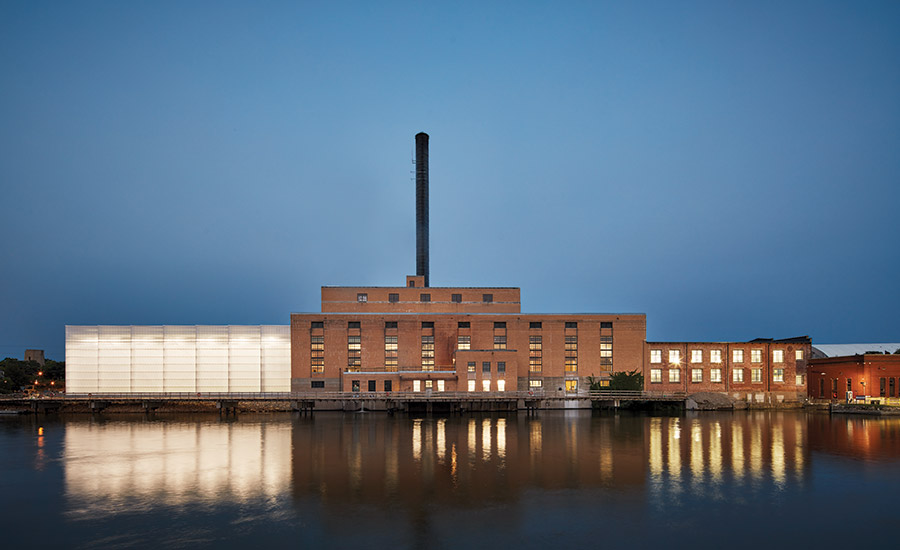 The glow of the new field house at night contrasts strikingly with three existing buildings of the Beloit College Powerhouse (4). A stair (5) at the entrance faces a mural, Rock River Valley, by artist/cartographer Scott Reinhard. Photos © Tom Harris 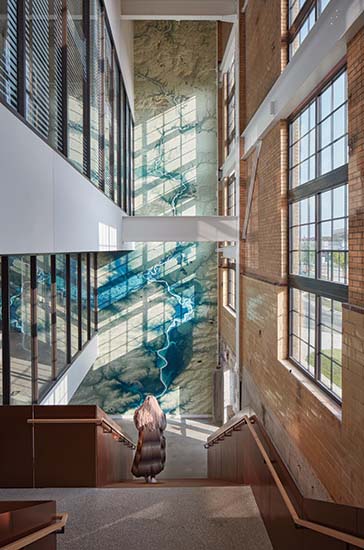 Energy from river water provides radiant heating and cooling, augmented by a dedicated outdoor-air system that minimizes microbial contamination. This, along with its spaciousness, allows the Powerhouse to be used despite the Covid pandemic. Beloit project manager Dan Schooff calls it “an ideal building for social distancing.”

To connect with campus, city, and river, Gang made several smart moves. The Powerhouse links to the school’s uphill precincts via a new pedestrian bridge. It can be reached by an elevator accessible to students and nonstudents alike, so both can use it to walk to campus. The field house opens to a town park. And a public walkway continues along the water, overlooked by terraces that encourage outdoor socializing and studying. “Beloit has been a river college without ever making it all the way to the river,” says Bierman. “Now we’ve fixed that, with a vengeance.”

Asked what she’s most proud of, Gang replies, “We took a building that used to burn coal and spew pollution, and we made it a center for healthy living. How great is that?”