If sculptor Constantin Brancusi had worked at a gigantic scale in turquoise-colored glass, the result might have looked something like Chicago’s St. Regis Tower. The 101-story supertall is artfully sculpted as three sleek, sensuous, shimmering spires of distinctive shape and graduated height. At 1,196 feet, the concrete-framed, glass-clad skyscraper, designed by Studio Gang, with bKL Architecture as architect of record, is the city’s third-highest after the 1,729-foot Willis (formerly Sears) Tower and the 1,389-foot Trump International Hotel and Tower, both by SOM. It is also the tallest designed by a woman anywhere. But its height, though impressive, is only one of several superlative qualities.

Jeanne Gang, Studio Gang’s founding principal, has a reputation as a creator of eye-catching forms, such as the undulating concrete slabs of Aqua, her first tower, which sits just one block away. But sensitive intervention in cities has always been a priority for Gang. “What if skyscrapers could be porous connectors,” she asks, “rather than barriers, for the public realm?” Not an easy task on this site, which straddles Lakeshore East, a 28-acre mostly residential enclave surrounding a 4.6-acre park, and Wacker Drive, a busy three-level road that runs along the south bank of the Chicago River. But Gang saw beyond the planning challenges to the urban opportunities. The greatest of these was to conceive St. Regis as the northern terminus of an axis that connects Lake Shore Drive to the Field Museum at the edge of Grant Park to the south. In doing so, she evoked the legacy of Daniel Burnham’s 1909 Chicago Plan, which sought to create Beaux Arts order and splendor along Lake Michigan. She also created paths and vistas that open the space between Lakeshore East Park and the river. 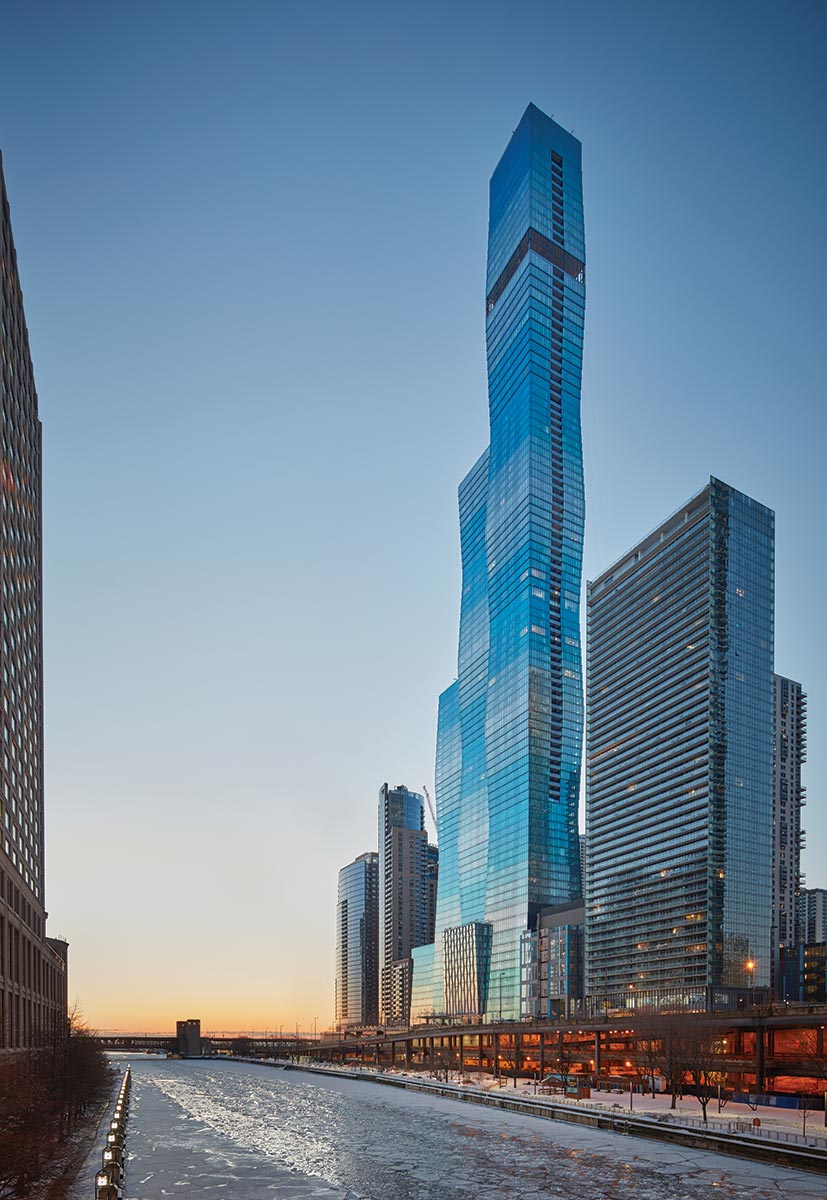 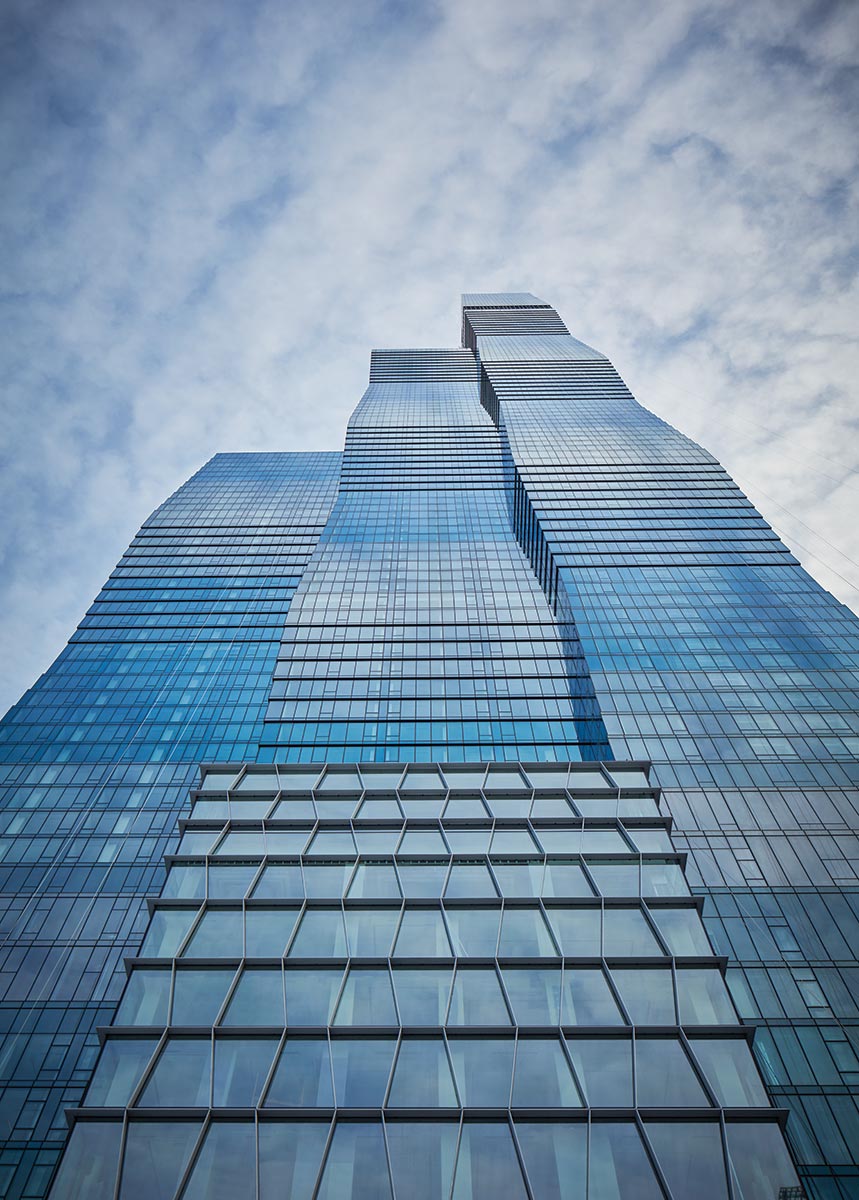 The skyscraper is composed of a modest 12-story volume and three spires of 48, 72, and 101 stories. Photo © Tom Harris, click to enlarge.

Gang enlivened the street wall on Upper Wacker Drive by organizing the $1 billion, 1.9 million-square-foot condo-hotel as four distinct volumes composed of 12-story sections, each of which is a “frustum,” a truncated pyramid shorn of its pointed top. These are stacked and nested, right side up and upside down, to form, moving from east to west, a modest volume of 12 stories and three towers of 48, 72, and 101 stories respectively. Their staggered interconnection gives each floor eight corners (which surely pleases the developer). Why frustums? “We started with conical elements,” recalls Gang, “but those didn’t stack or pack well.”

The central tower is suspended two floors above street level, thanks to a coupled, dual-core shear-wall assembly that uses a reinforced-concrete spine to transfer wind loads to the cores of the towers that flank it. The resulting opening on the ground functions as a street for both pedestrians and vehicles, linking Upper Wacker Drive to the north with East Waterside Drive to the south and providing sheltered access to multiple public spaces in the hotel. Hovering above is a nine-story-high projecting glass box nicknamed “the Cube,” which cantilevers over the sidewalk, punctuating the north facade. It will house a restaurant—the only interior designed by Studio Gang and not yet completed—with ceilings up to 38½ feet high and views uptown, downtown, and along the river. 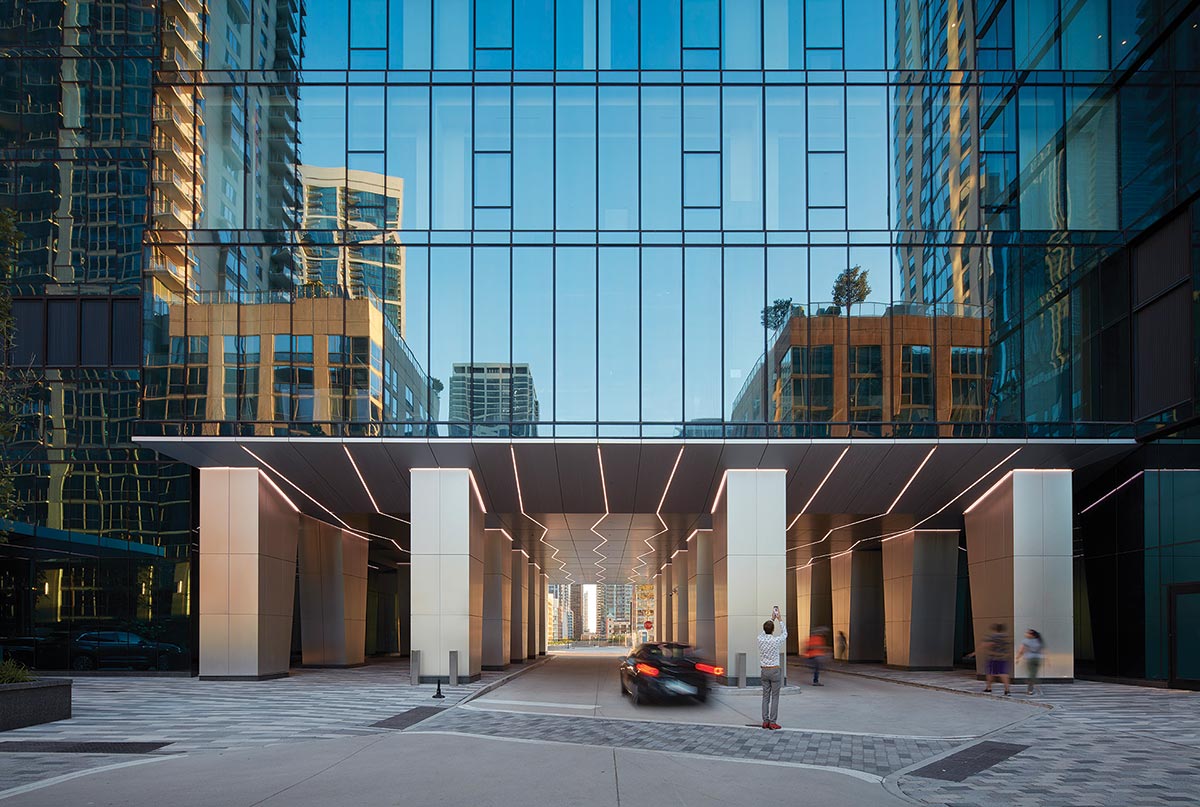 The central tower is suspended above street level to create a passage for cars and pedestrians. Photo © Tom Harris

To achieve the tapered forms Gang wanted, the floor plates within each 12-story section graduate from 80-foot squares to 90-foot squares, with an offset of 5 inches from one floor to the next. The structural engineers at Magnusson Klemencic Associates considered navigating the difference from floor to floor with sloping columns at the perimeter, but determined that shifting each column line by 5 inches would be more economical. And so the columns, and the curtain wall enclosing them, are vertical rather than angled. This gives the building its stepped edges, which, seen from a distance, appear to be sloped.

The most striking feature may be the innovative cladding of aquamarine glass. “The color is derived from the lake and the river,” says Gang. “The greenish tint comes from natural algae found in the Great Lakes.” There are six graduated shades, distributed so the darkest is used on the smallest floors, where the shorter distance from perimeter to core increases solar-heat gain. The lightest is used on the largest floors. Gang initially tried to achieve this with colored glass but couldn’t find the consistent gradient she wanted. She eventually settled on glass with a metallic coating by a German manufacturer. “They had a calibrated rendering tool that allowed us to select glass that fulfilled both the visual criteria of color and the environmental criteria of shading coefficients,” explains Gang. From inside the 393 condos on top and the 191 hotel rooms below, the color is barely perceptible and does nothing to diminish the spectacular views through floor-to-ceiling windows. 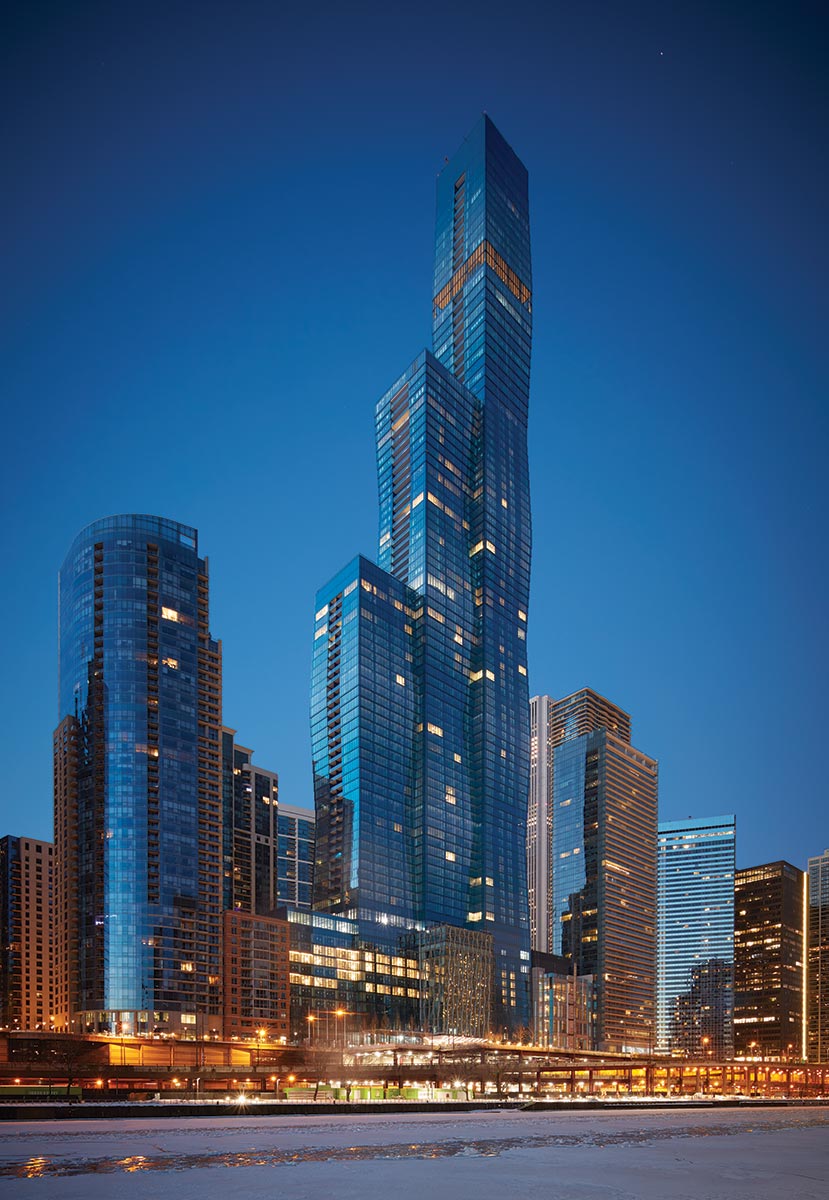 A blow-through floor just above the 86th story, which helps reduce sway, is illuminated at night. Photo © Tom Harris

Skyscraper design in Chicago has generally moved away from muscular Modernist structural expressionism in favor of taut curtain walls that conceal structure. This is true of St. Regis, but with one important exception. As the design of the tallest tower developed to suit the unit size and mix the developer wanted, wind tunnel testing revealed that the most cost-effective way to avoid sway in the Windy City would be to supplement the liquid mass dampers at the top by adding a blow-through floor above the 86th story. Gang chose to articulate this as a continuous two-story-tall void. Despite otherwise glowing reviews, this feature has been singled out for criticism. Writing for the Chicago Tribune, the paper’s former architecture critic Blair Kamin called it “strangely unfinished, a scar.” Responds Gang: “We could have tried to disguise it with louvers and things like that, but we made a very conscious choice to embrace it and express it as the physics of a tall building.” It’s a persuasive argument. 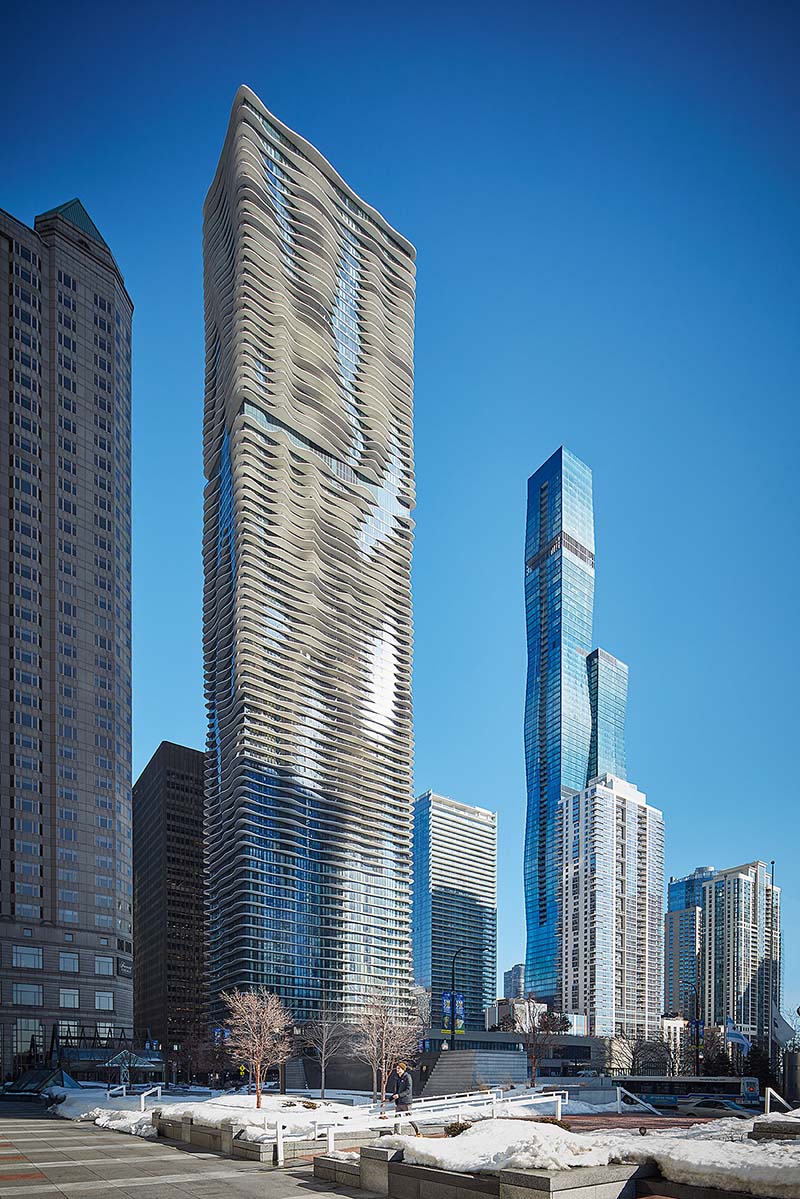 Aqua, completed 12 years ago for the same developer, Magellan, was much touted at the time for its unique design. How does Gang compare its sinuous concrete topography to St. Regis’s syncopated crystalline spires? “The buildings had different responsibilities to the city,” she replies. “Aqua was more blocked in and looks best from close up. St. Regis is visible from both the river and the lakefront. This makes it part of the public realm. I’m a birder and a runner, so I use the lakefront a lot, and I see the building from there often,” she continues. “The tower from afar, it really works. You can see the color gradient. You can see different reflections of light. It’s a positive contribution to the skyline, right? At the same time, it’s a positive contribution to the experiential quality of the city’s architecture.” It’s hard to argue with that assessment. St. Regis succeeds as both sculptural object and urban place-maker. That’s a winning combination. 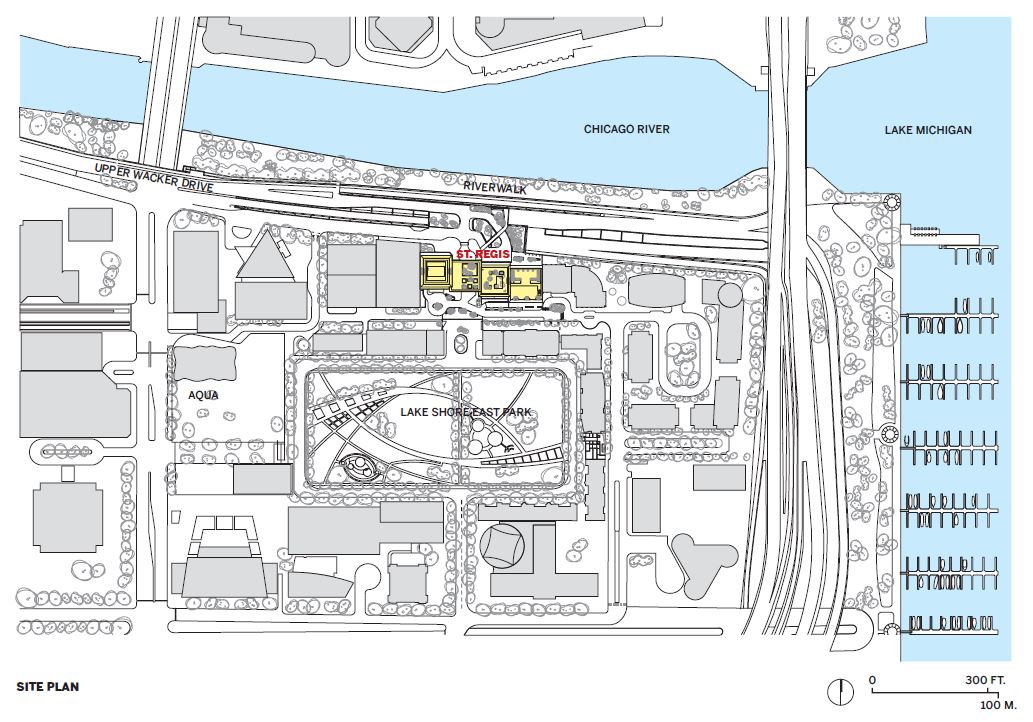 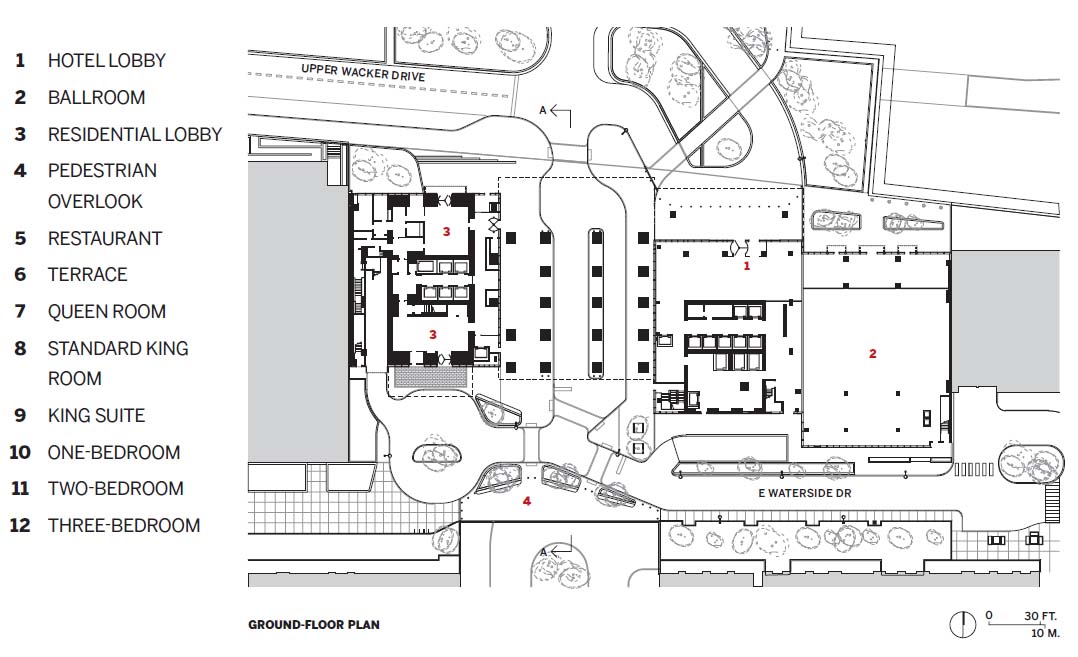 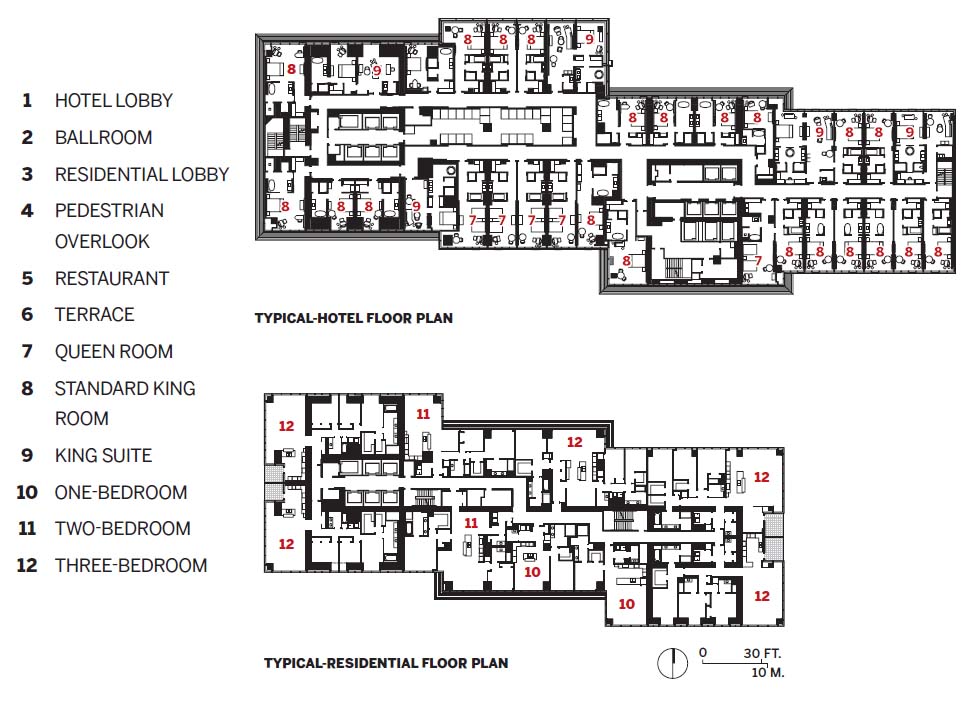 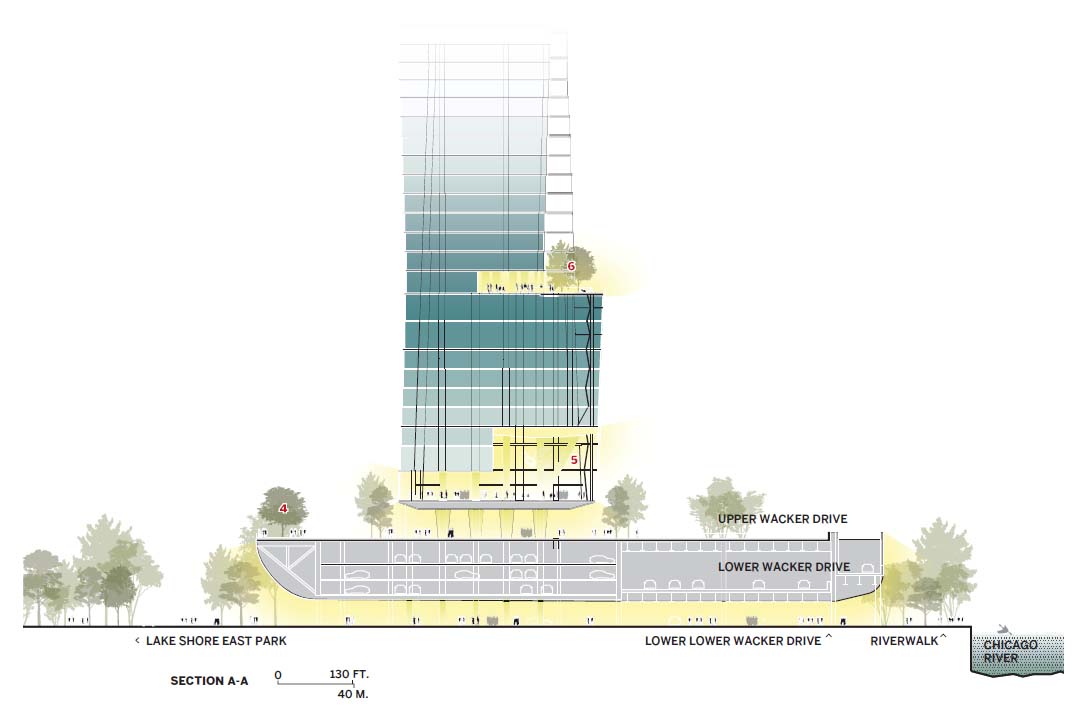 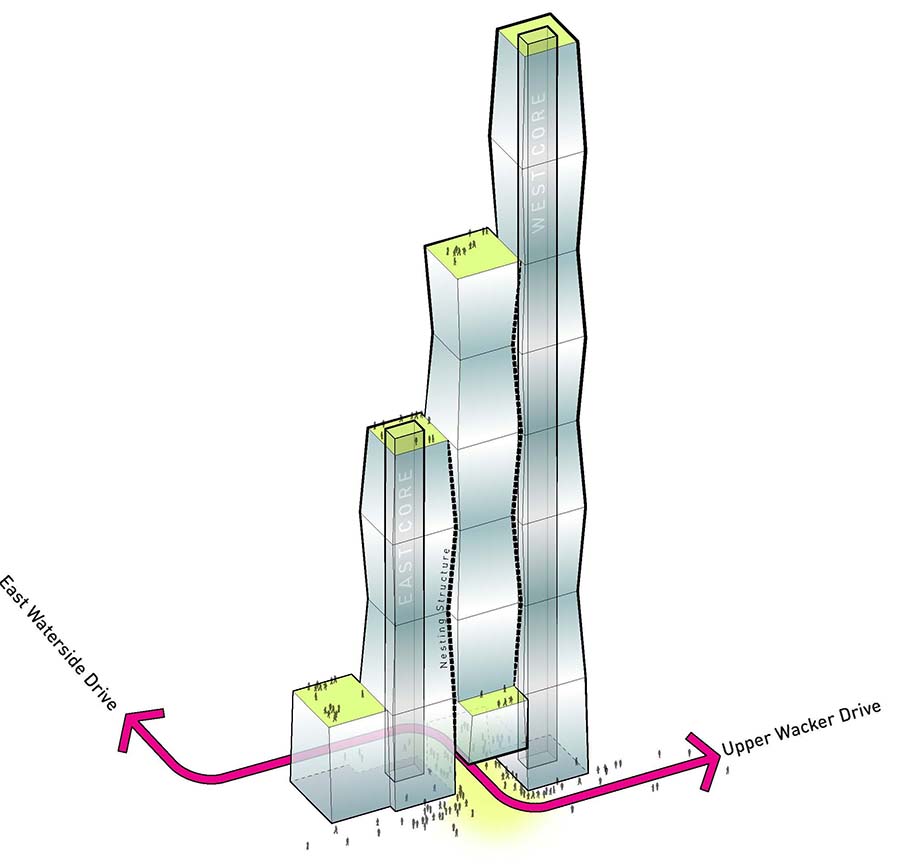 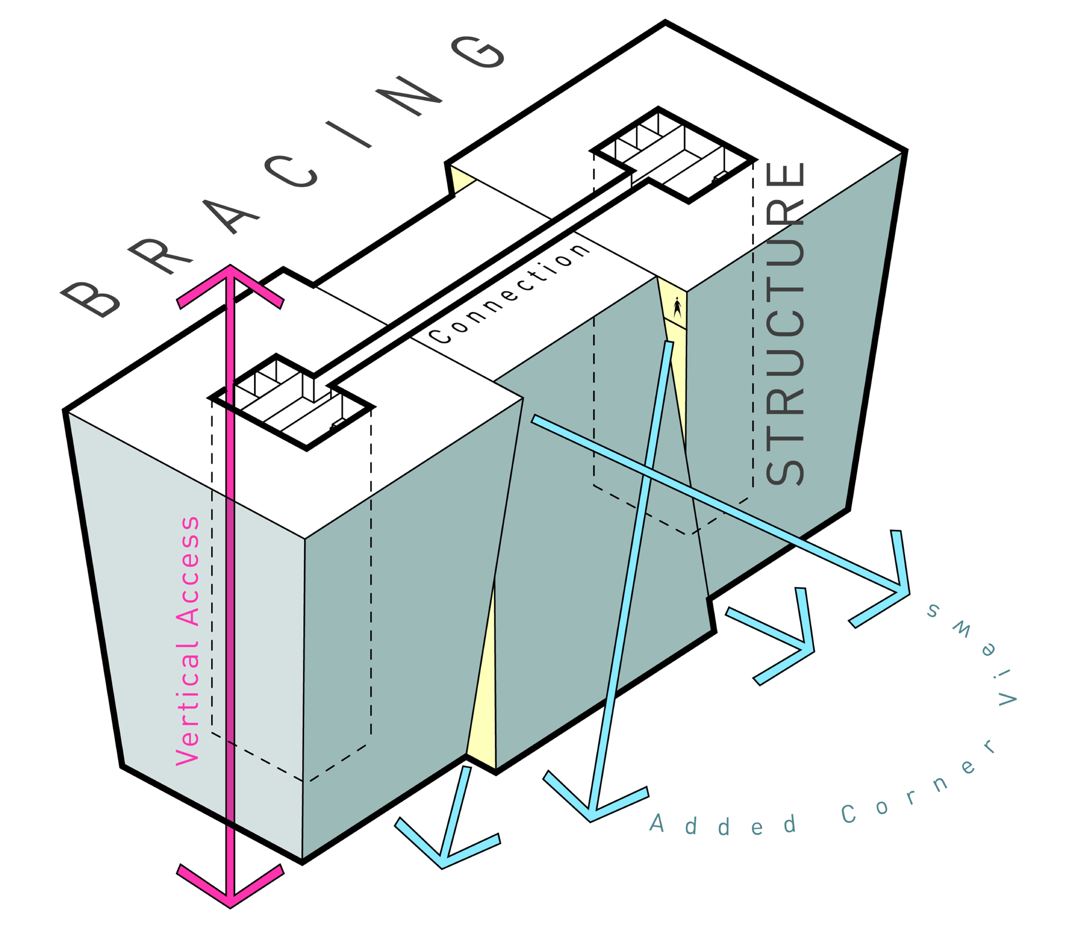 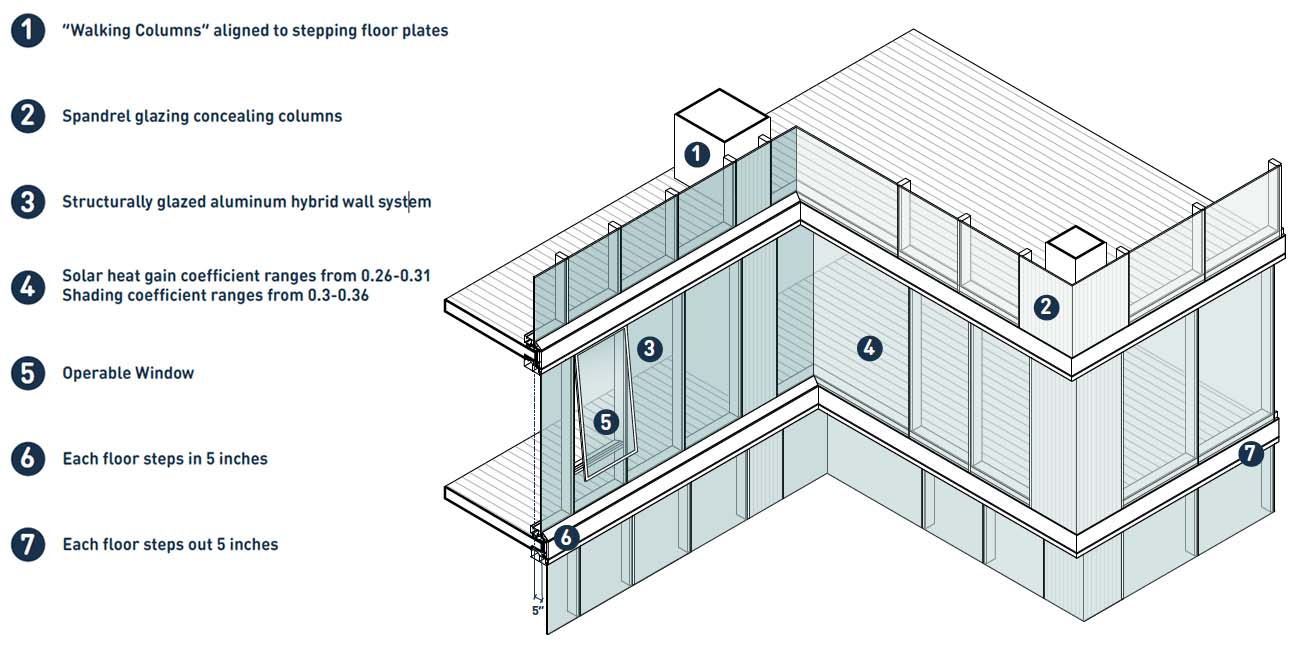 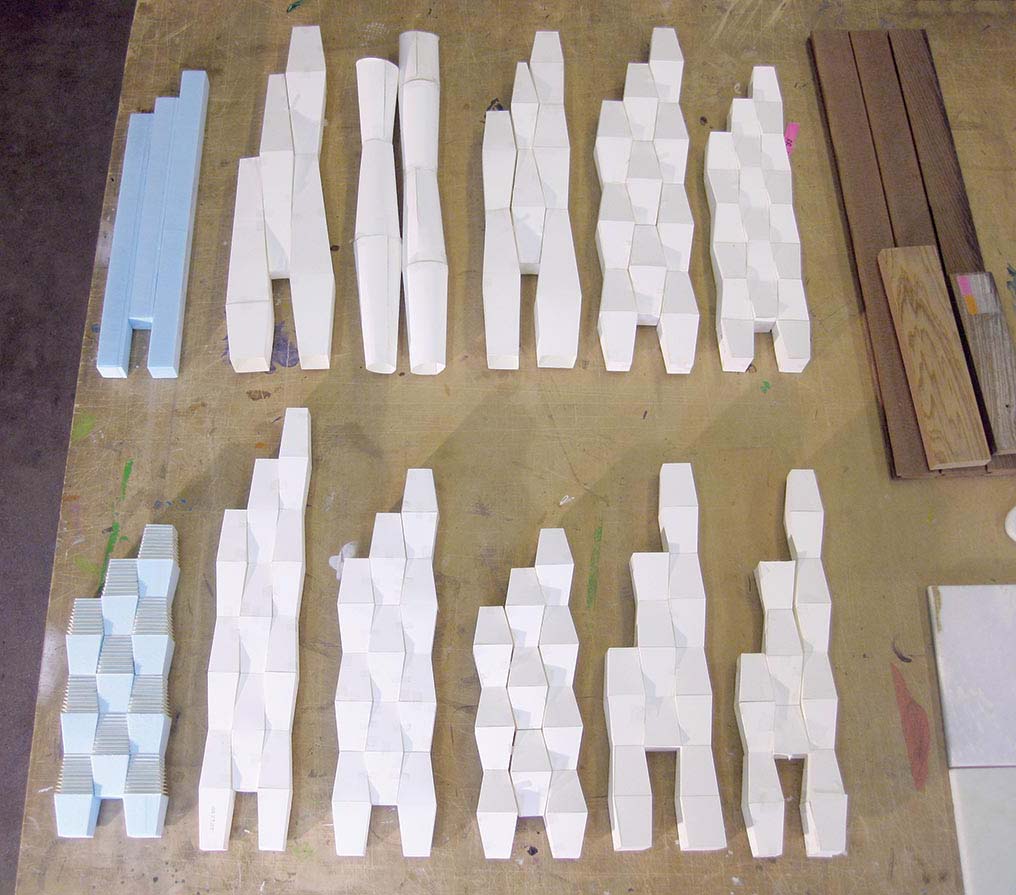