ISEC Pedestrian Crossing at Northeastern University by Payette and Arup

No one thinks of a pedestrian bridge as an art form or place to linger, but the design team of a year-old overpass in Boston was determined not to be weighed down by its rudimentary function. Thanks to the collaborative effort of Payette architects and Arup engineers and lighting designers, Northeastern University’s ISEC Pedestrian Crossing is a sculptural weathering-steel structure that generates a glow when night falls. Arcing above a five-track rail corridor, this dramatic passage connects the school’s existing campus and a new academic center by Payette that includes the Interdisciplinary Science and Engineering Complex (ISEC), completed in 2016, and a lab facility under construction. Located at the nexus of the city’s Fenway and Roxbury neighborhoods, this fluid passage serves area residents and commuters as well. 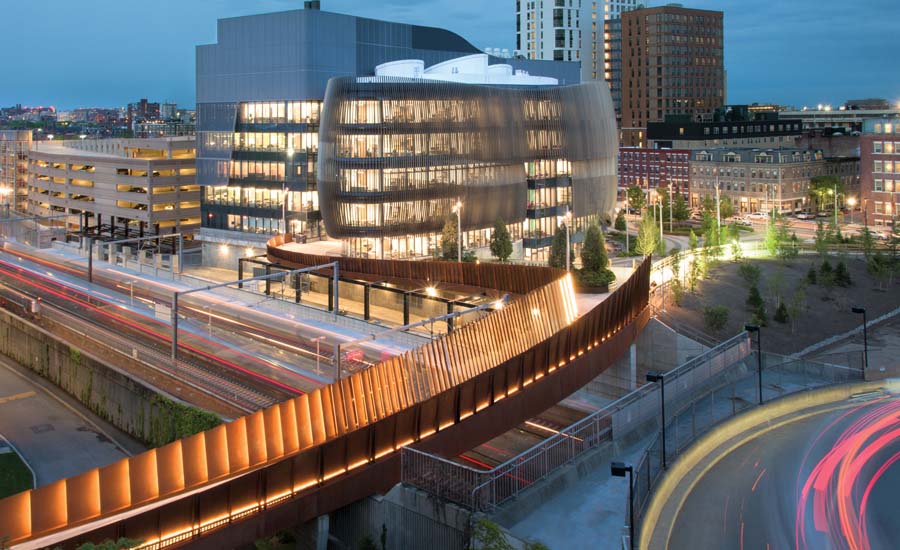 The bridge curves over rail tracks to link the existing campus with a new academic center. Photo © Payette/Tanguy Marquis, click to enlarge.

The university sought an architectural experience that would be embraced by the public and feel safe, says project architect Parke MacDowel. Stipulations set by rail authorities also determined design decisions. Because the tracks wouldn’t shut down for routine maintenance, the team built with weathering steel not only for its patina, but because it wouldn’t require painting. The designers also flared the parapets out 10 degrees to avoid creating a tunnel-like effect when they satisfied height requirements, issued to prevent debris from being tossed on the tracks.

Arup lighting designer Jake Wayne worked with the architects and engineers to integrate daylighting and effective nighttime strategies. On the eastern parapet, tall canted panels are spaced with strips of structural self-cleaning glass in a sawtooth formation to create a sense of transparency. As the bridge sweeps across the tracks, the glazing infuses the span with sunlight and opens it to Boston views. After dark, linear LEDs behind the glass, removable from inside the bridge, wash light onto the burnished surfaces. Across the deck, the same luminaires are tucked into a cove beneath the tightly overlapping panels of the west parapet, illuminating the concrete walkway. Encapsulated within metal-sheathed plexiglass housing, the lighting radiates to the outer surfaces of the bridge, producing an otherworldly effect. Wayne chose a constant 3000-Kelvin color temperature that resonates with the steel and provides a balanced white light that is neither too warm nor too cool. 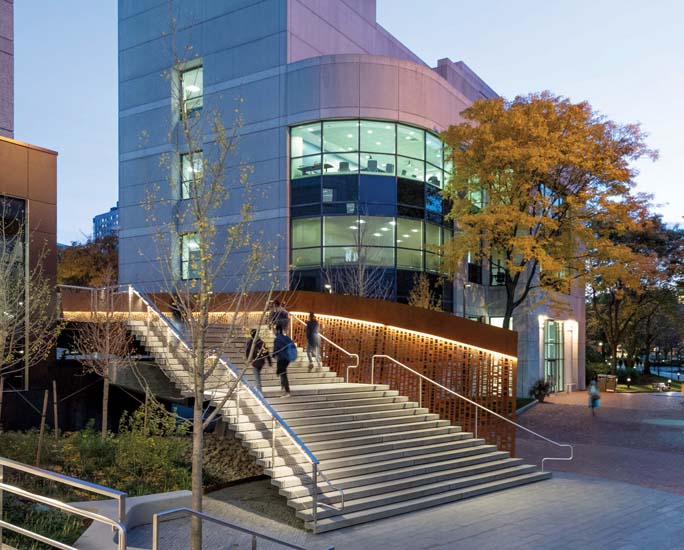 The solid parapet fades into a pierced pattern as it moves north, where an illuminated handrail guides pedestrians to and from the span. Photo © Chuck Choi

“The bridge architecture is plenty dynamic, so there is no need for a light show,” he says. Instead, all is neat and accessible. Every fixture has its own individually addressable driver, each with a dedicated DMX channel that ultimately links to the ISEC control system. All lighting components are concealed in a hollow beneath the vertical panels, and wiring is carried to the opposite parapet through conduits in the deck flutes.

Accessed by stair, ramp, or elevator, this finely tuned crossing lands on gracious north and south plazas, inviting students and the community to enjoy the sum of its parts.