The Serpentine Galleries in London has appointed Yesomi Umolu its director of cultural affairs and public practice. It’s a new position at the institution, which is well-known for its yearly commission of the Serpentine Pavilion—a temporary structure designed by an architect who has never before built in the UK. A native Londoner who began her career at the Serpentine, Umolu spent the last five years in Chicago, as director and curator of exhibitions at the Logan arts center at the University of Chicago. In 2019, she left her mark as the artistic director of the third edition of the Chicago Architectural Biennial, cocurated with Sepake Angiama and Paulo Tavares.

Umolu steps into her new role this month at the Serpentine, where she will oversee the gallery’s curatorial, interpretive, and editorial portfolios. As an elite cultural institution presenting work at the intersection of contemporary art and architecture, the Serpentine offers Umolu a position that “marries a lot of my interests, namely interdisciplinary practices, emerging practices, [and] curatorial and artistic innovation,” she says.

If you are doing your job right at an institution, especially in a city as multicultural and diverse as London, you want to reflect that community, and you want to do it with a certain level of clarity.

In a statement, Serpentine Galleries CEO Bettina Korek and Artistic Director Hans Ulrich Obrist praised Umolu’s record of commissioning high-quality interdisciplinary programming. “Yesomi’s appointment reinforces a structural trajectory for the organization that fuses curatorial affairs and public practice. We are excited to work with her to innovate around centering audience experience and community engagement in all that we do.”

Like all curators today, Umolu is operating in an era that has seen museum audiences atomized, and their exhibitions digitized, by pandemic-induced social-distancing dictates. And set against a backdrop of worldwide uprisings against racism and police violence, she sees her upcoming tenure at the Serpentine as “a moment of redress.”

“If you are doing your job right at an institution, especially in a city as multicultural and diverse as London, you want to reflect that community, and you want to do it with a certain level of clarity,” says Umolu. “What we’ve learned over the past few months is that maybe we haven’t been as attentive to this question of clarity and equal access, to the extent that maybe there has been an imbalance in the system.” 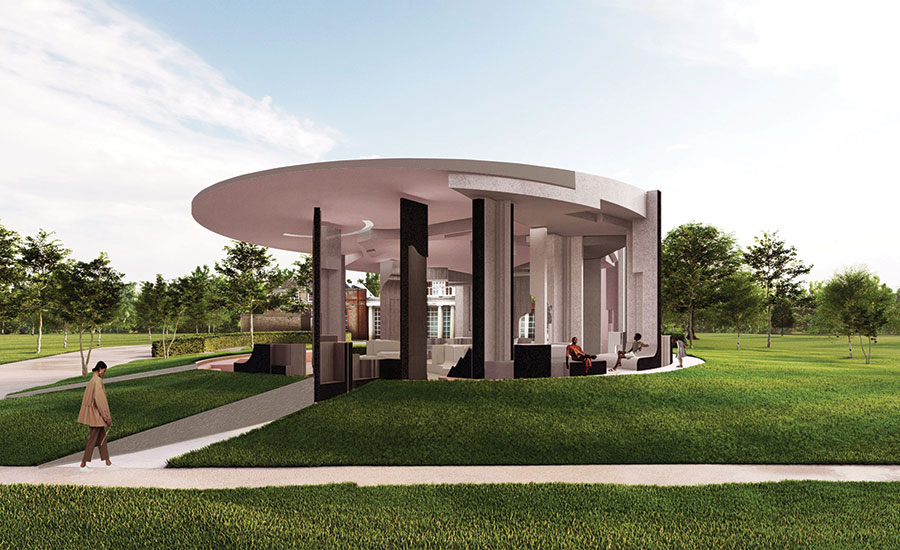 Counterspace’s 2020 Serpentine Pavilion has been extended into a two-year commission. Image courtesy Counterspace, click to enlarge.

The 2020 Serpentine Pavilion is being designed by the firm Counterspace, an all-woman-led group of emerging practitioners from South Africa. The installation’s public programming will extend through 2021—longer than usual, in response to COVID-19—with off-site and online programing. Though the firm’s commission predates the pandemic and this summer’s social movements, its project is loaded with themes of collective assemblage and the inclusion of minority voices.

In these “times of great hardship,” says Umolu, cultural intuitions must “improve our civic offerings to a broader public and a broader community.”

Her 2019 Chicago Architecture Biennial was similarly invested in giving a platform to underrepresented voices, offering incisive critiques of how architecture and design work within systems of power, racism, colonialism, and inequality. And, like the programming that will extend beyond the Counterspace pavilion into other parts of London, its exhibits were much more integrated into various neighborhoods across the city than past editions. Since 2019, the axis of architectural discourse has moved further from questions of formal expression and experimentation and toward exposing the underlying networks of power and money that direct architectural production. “Because of this moment that we’re in,” she says, “we have to think very intently about, ‘What does it mean to work in public? Which publics are we working with? Why are we working with them?’” Umolu has the opportunity and experience to reexamine the Serpentine’s garden folly, and ask how a celebrated space for form-making can critique its own origins.