This website requires certain cookies to work and uses other cookies to help you have the best experience. By visiting this website, certain cookies have already been set, which you may delete and block. By closing this message or continuing to use our site, you agree to the use of cookies. Visit our updated privacy and cookie policy to learn more.
Home » La Comédie Clermont-Ferrand by Souto Moura Arquitectos/ Bruhat et Bouchaudy
ProjectsBuildings by TypeReuse and Renovation

Since the reign of Louis XIV, culture in France has been an affair of state. In recent decades, the culture ministry has made efforts to “decentralize,” among them the creation of 76 scènes nationales—regional theaters co-funded by central and local government. Clermont-Ferrand, the historic capital of Auvergne in the Massif Central, was granted a scène nationale in 1997; unlike all the other theater companies, the Comédie de Clermont had no permanent home, instead putting on performances as best it could in venues around town. Now, 23 years later, it finally has a building made to its measure, centrally located, expanding and adapting Clermont’s old bus station—a lean and elegant theatrical machine, designed by Eduardo Souto de Moura (who is based in Porto, Portugal) in collaboration with local firm Bruhat et Bouchaudy. 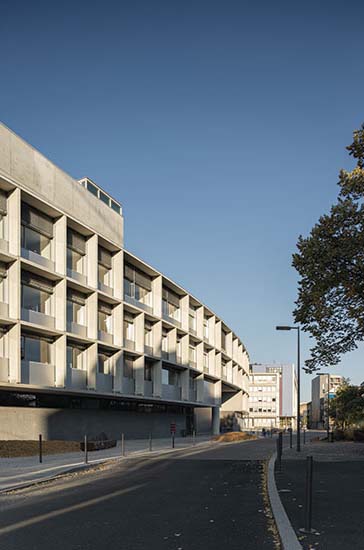 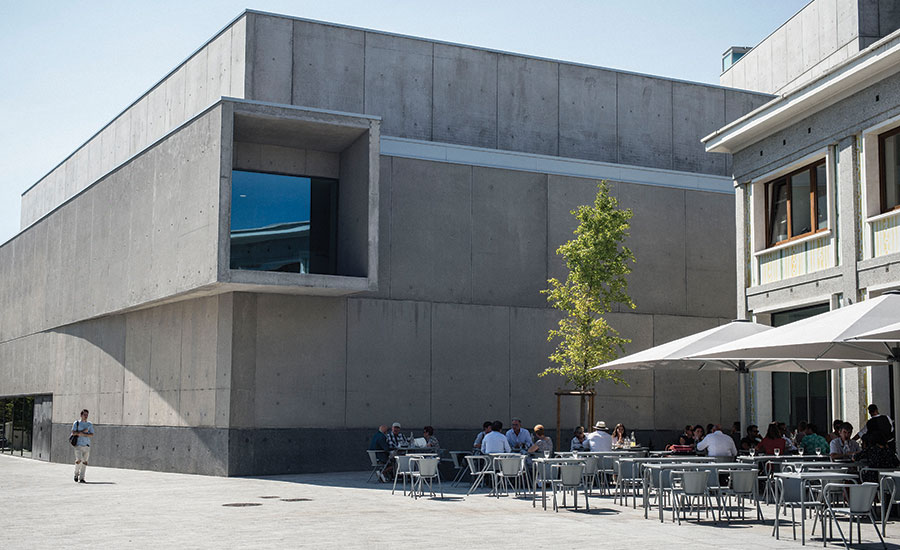 François Bouchaudy, who has known Souto de Moura for over 30 years, sought him out for the 2015 Comédie de Clermont competition. At first the Pritzker Prize–winner was reluctant: “I already had a lot of work—why do competitions?” But three factors persuaded him: friendship; the thrill of a new typology; and the fact that the brief called for the integration of the bus station’s main hall, built in 1957–61 by the Clermontois architect Valentin Vigneron, a disciple of Auguste Perret. “Perret is an architect I appreciate, so I got enthusiastic about the project.” Indeed, Souto de Moura’s attitude toward this vestige of postwar optimism, which saw Vigneron faithfully copying his master’s protomodern raw-concrete classicism, was no doubt a factor in his winning the competition—for, where the other finalists submerged the station in giant superstructures, he displayed an almost complete self-effacement that allows the existing building to stand out proud on its boulevard setting. Housing both the ticket office and a restaurant—which in pleasant weather spills out onto the side street, closed to vehicular traffic at the architects’ behest—the beautifully restored hall provides a monumental light-filled entrance, whose civic dignity welcomes rather than intimidates.

The program called for a main auditorium seating 900 people (886 as built) and a black-box theater for up to 336 sitting and 1,000 standing. Again, Souto de Moura and Bouchaudy took a different path from the other competition finalists, all of whom, in response to the tight site, piled up the two auditoria. Instead, the winning team placed them side by side, daring to impinge on two narrow strips of land the brief had advised be left untouched due to the likely presence of archaeological remains. This rule-breaking, which required the use of micropiles to minimize below-grade disturbance, resulted in “an economy of both construction and use,” says Bouchaudy: the hauling of scenery up and down stairs was avoided, and a shared loading dock could be located between the two theaters. Furthermore, the new building’s impact on the cityscape was drastically reduced, the fly tower rising just 82 feet behind the bus station. 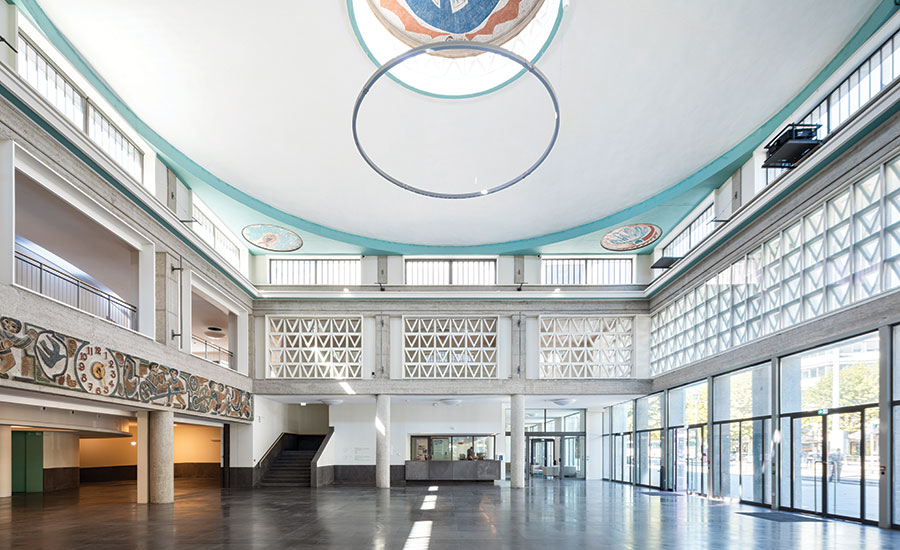 
The main hall of Vigneron’s bus station (3 & 4), with its exposed-concrete structural elements and proto-modern classicism, provides an appropriately monumental and light-filled entrance to the new performance venue. Photos © Mathieu Noel 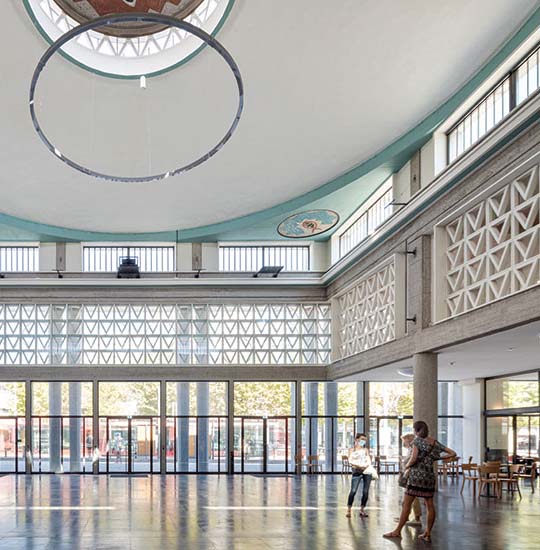 Never having designed a theater, Souto de Moura found a suitable model for the main auditorium in Perret’s pioneering concrete-framed Théâtre des Champs-Élysées (TCE) of 1913. But the Comédie’s brief specifically forbade balconies, since the director, Jean-Marc Grangier, “wanted to avoid the hierarchy of a classic theater and instead have everyone together facing the stage.” The hybrid result, decked out in thespian red, comprises a curved auditorium like Perret’s—“to concentrate the sound in the center,” explains Bouchaudy—with steep stadium seating that ensures perfect sight lines. Souto de Moura originally wanted a modular stage, but Félix Lefebvre, the team’s consultant scenographer, persuaded him to use a classic proscenium arch. This raised the question of how to square the circle where the auditorium met the stage. “I had no qualms copying Perret, since he did it very well,” says Souto de Moura, referring to the TCE. “The history of architecture is full of solutions—why reinvent the wheel?” The copying takes the form of “balconies”—technical galleries with no seats—that whiz around the sides and rear of the auditorium, helping to diffuse sound that would otherwise reverberate. Again following tradition, a dome coifs the auditorium, though it is deliberately shallow, so as not to overwhelm the exterior of the former bus station, and is irregular, for acoustic correction. 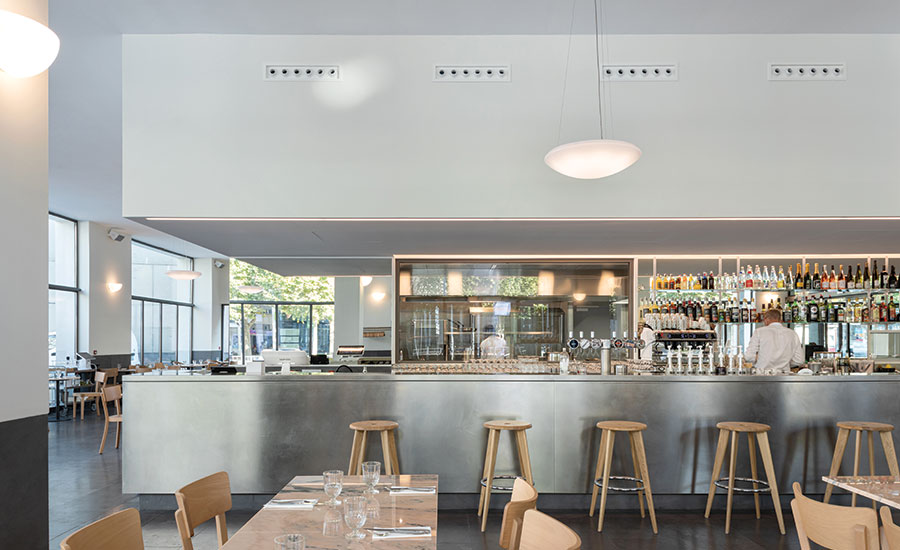 
The aesthetic of the café (5), located at one end of the former bus terminal, is clean and spare, as is that of a double-story staff “salon” (6). Photo © Mathieu Noel 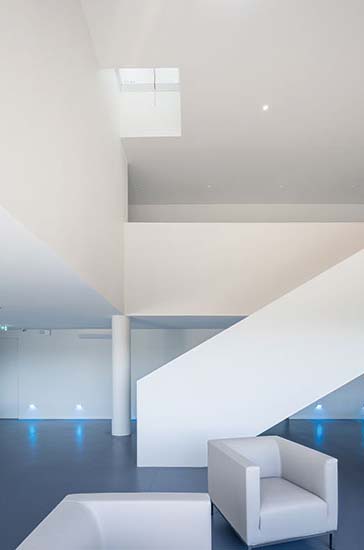 The smaller auditorium—the same size as the main hall’s capacious stage, so that the latter’s sets can be built and stored in it—contains flexible seating that also can be completely removed. Lined with dark acoustic bricks, it features a large grade-level window, a suggestion of Lefebvre’s. “Félix told me, ‘Eduardo, I’m tired of always working in the dark, seven or eight hours of rehearsals without seeing the light of day.’ So I opened everything up”—the dressing rooms and the costume workshop at the rear are all abundantly glazed, while patios bring light into the heart of the rest of the building, including the rehearsal hall. “Open to the city,” as the theater is, its discretion in the urban landscape extends to the choice of material—raw concrete, to blend in with the Perret-esque neighbors—and its design sees Souto de Moura playing with history: his rear facade evokes late-career Le Corbusier, champion of horizontal glazing, in contrast to Perret, who insisted on vertical fenestration; joining the two, on the side elevation, is the School of Porto, represented by a very Siza-esque protruding window. 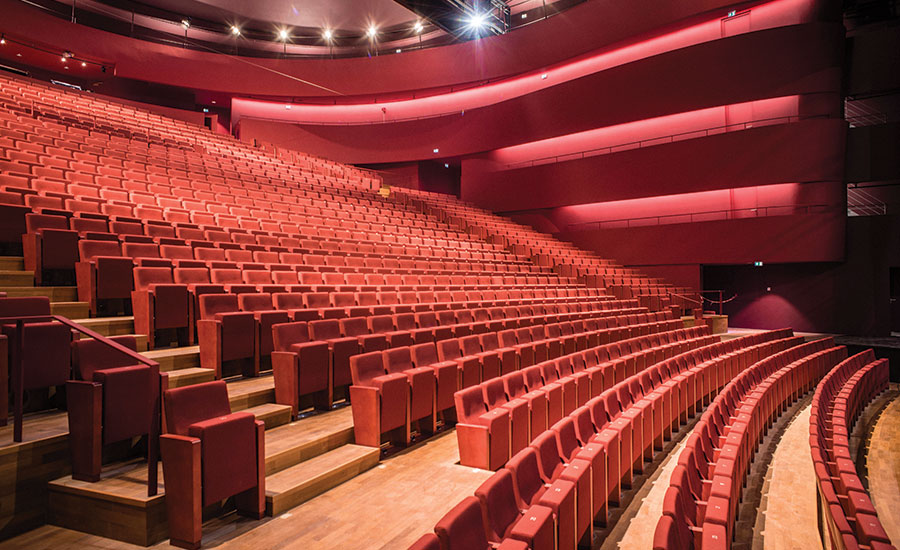 The main theater, all decked out in red, has sinuous technical balconies that help diffuse sound. Photo © Pascal Aimar

Construction was not a happy time for Souto de Moura, since he was asked “to build the theater for the same price [$38 million] it would cost in Portugal, where wages are half those in France,” and to do it fast—33 months. Famous for his attention to detail, he was dismayed by shoddy French craftsmanship and fought a grueling battle with the contractor that nearly saw him quit. “The concrete was a disaster—we ended up having to sandblast and bush-hammer it. But only up to a certain height, to save costs. On the fly tower, we left it as is.” Despite its difficult birth, the Comédie de Clermont was acclaimed during its brief inaugural season this fall (cut short by Covid-19). After a two-decade wait, Jean-Marc Grangier is especially thrilled, not only with the new building and the “ideal location, but also because of the bus station. There was an identity here that was totally compatible, because for me leaving on a journey is what theater is all about.” 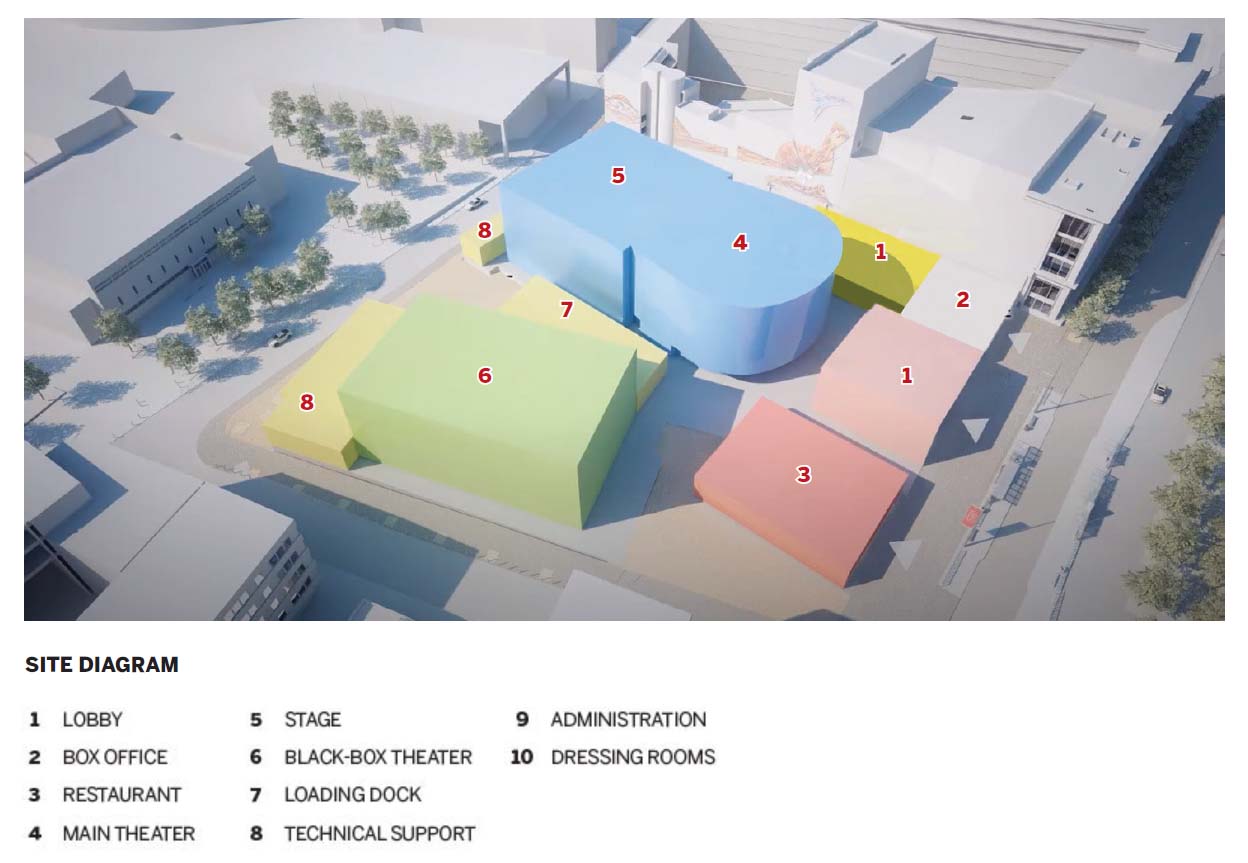 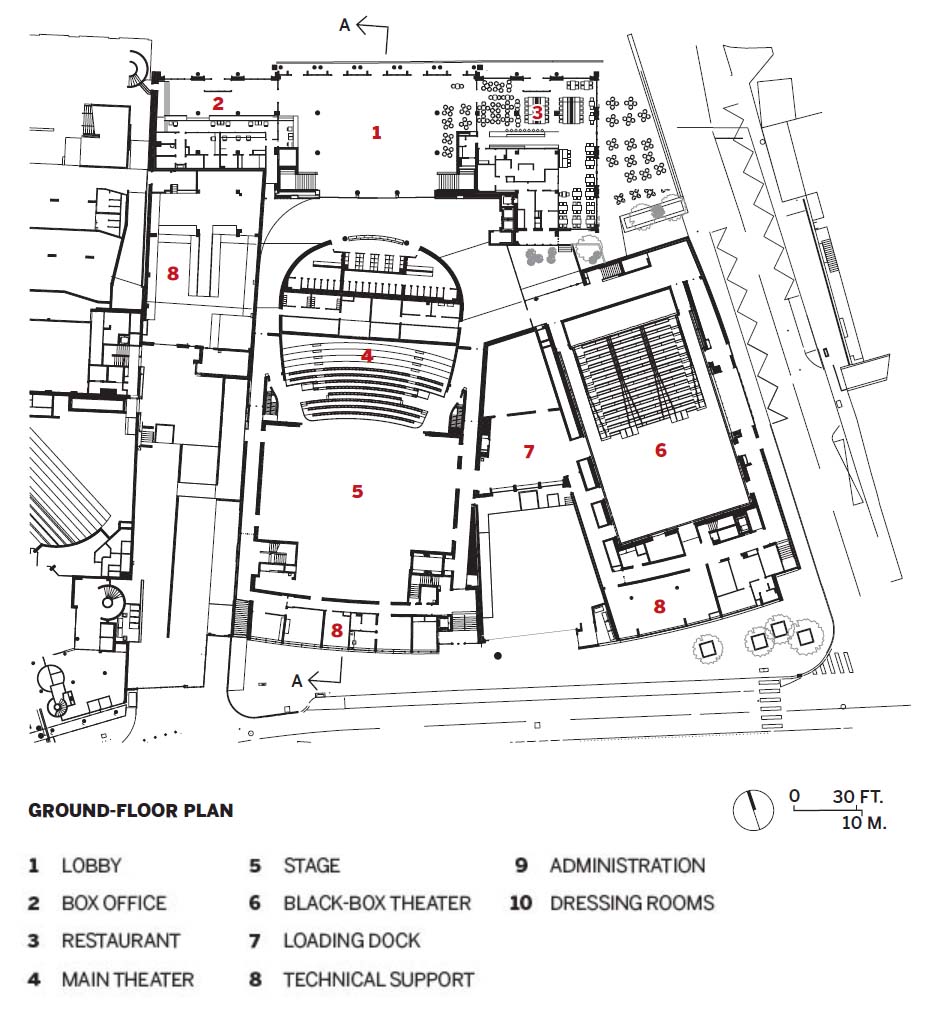 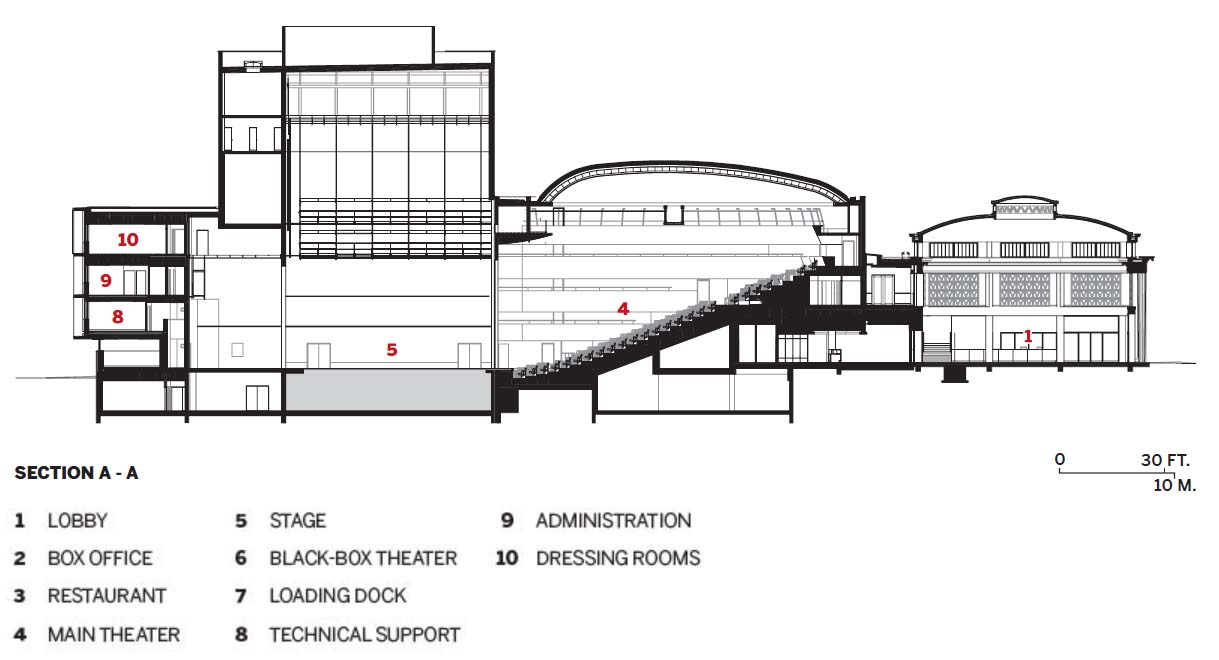