Schinkelplatz and Humboldt Forum by Rafael Moneo and Franco Stella

In shaping a coherent urban center since the fall of the Wall in 1989, the city of Berlin has faced immense challenges: the lingering destruction from the Second World War and the brutal 30-year urban bifurcation, and then the integration of the sprawling federal bureaucracy, once the city became the capital again, of a reunited Germany. The Planwerk Innenstadt (City Center Plan Guide), from 1999, called for such strategies as a uniform building height of 72 feet, limited dimensions of window openings, and maintaining the existing pattern of city blocks to create viable urban spaces and a sense of historical continuity. Revisions made in 2010 proposed specific interventions, like the reconstruction of key monuments and public spaces for 11 areas in the former East and West. Although there are some exceptions, such as the high-rises clustered around Potsdamer Platz and the Zoo train station, as well as those planned for the Alexanderplatz, an embrace of historical models, as inspiration for the new and as a basis for direct imitation in rebuilding, is at the heart of these measures. 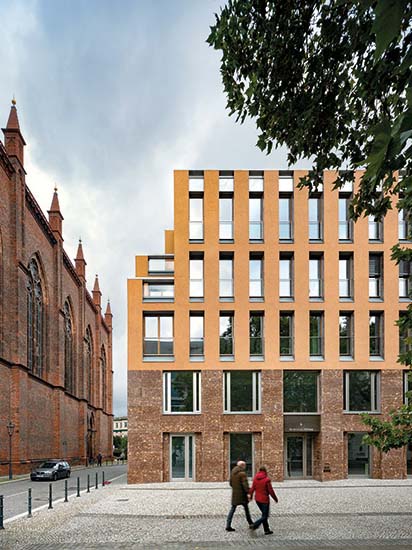 One of the most highly charged areas in the 2010 revisions relates to the historical center, where this approach has been played out in two ways: with a partial facsimile of the City Castle, now known as the Humboldt Forum (see sidebar), and the reinstatement of city blocks and squares, using new architecture at the Schinkelplatz site, including a 30,000-square-foot infill building by Madrid-based Pritzker Prize–winning architect Rafael Moneo.

Located at the eastern end of the Unter den Linden boulevard around the rebuilt City Castle, the historical center is a hub for politics, high culture, and tourism. Formerly the nexus of imperial power, the East German government had demolished the war-damaged castle in 1950 and constructed in its place the vast, modern government forum, including the Palace of the Republic and the Foreign Ministry, obliterating the 19th-century urban fabric in the process. 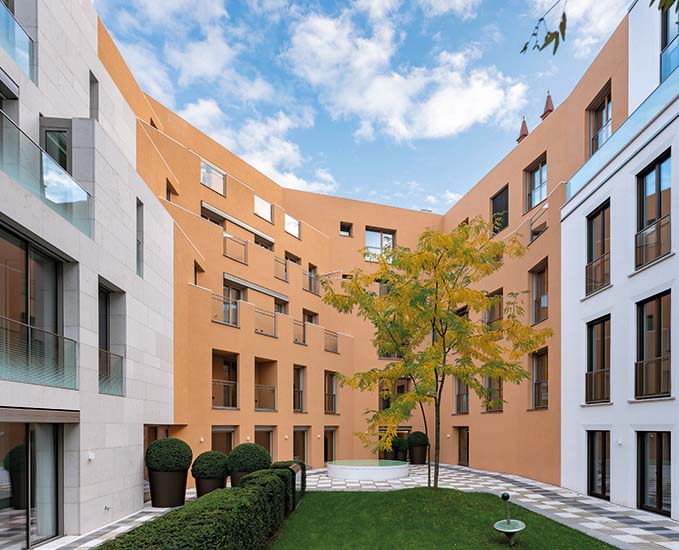 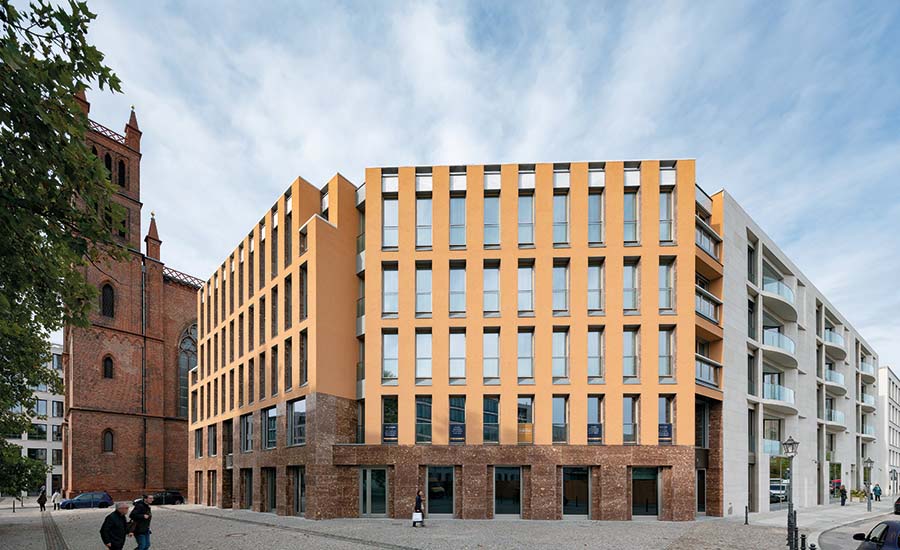 Moneo’s building shares a U-shaped courtyard (1) with buildings by Hemprich Tophof Architects and Schultes Frank Architects (the balconied facade of one visible - 2).

To make way for the reconstructed City Castle and the Schinkelplatz development, the historical center plans required razing the East German Palace of the Republic and the Foreign Ministry (a controversial move among some contemporary historians). While the castle directly references Germany’s imperial past, the Schinkelplatz pays homage to Karl Friedrich Schinkel (1781–1841), the great Prussian civil-servant architect, whose restrained Neoclassicism is on display nearby in his Altes Museum, the Neue Wache (New Guard House) on Unter den Linden, and the Grosses Schauspielhaus (Grand Playhouse) on the Gendarmenmarkt.

Situated directly across from the City Castle, the narrow Schinkelplatz stretches along a fork in the River Spree. A residential district for much of the 19th century, by 1900, department stores had replaced apartment buildings, which were damaged by Allied bombardment and then finished off by the construction of the East German Foreign Ministry in the 1960s. In the near future the Schinkelplatz site will—once again—feature two distinct redbrick structures designed by Schinkel: the neo-Gothic Friedrichswerdersche Church (from 1831, partially damaged in the war and restored in 1987) and the Bauakademie, or Building Academy, based on English industrial architecture (from 1836, partially damaged in the war and demolished in 1962, with a re-creation planned) will once again stand across from one another on the site’s southern border.

The site in 2005, before these structures were built, with a facsimile of Schinkel’s Bauakademie erected. Photo © David Plotzki

Nestling between the two, the infill building by Moneo forms the end of a block of new luxury housing and faces a public space, the Werderscher Markt. For this architect, directives like the Inner City Plan Guide were not impediments but rather inspirations for a cogent design: “Even when everything seems predetermined, there is ample room for an architectural intervention,” Moneo says.

At the Werderscher Markt, the challenge was to design a facade that served as an adequate backdrop to the plaza and connected the disparate icons. “How to mediate between two buildings, which, though coming from the same architect, are in fact so un-alike?” he asks. 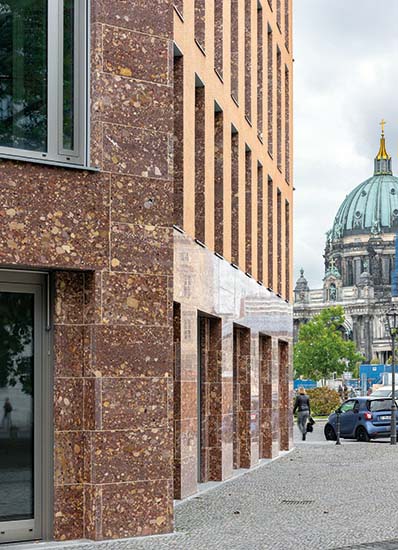 A view of Schinkelplatz, in Berlin, with a new mixed use building by Rafael Moneo in the foreground. Photo © Duccio Malagamba

He took cues from Schinkel’s sketches for the long-gone surrounding apartment facades, noting their gridded fenestration and the subtle “fragmentation” caused by the off-kilter property lines and slight variations in height. With these domestic models in mind, his pale orange stucco facade is articulated as three planes: one placed parallel to the church, another along the plaza, and the third at a diagonal to the Building Academy, with stepped-down corner joints. An elongated grid of deep-set floor-to-ceiling windows covers these surfaces, while Soria limestone from northern Spain, in varying maroon, cream, and brown hues, wraps the base and lines the window jambs, echoing the palette of the brick church. Originally planned as residential, only one section nearest the Building Academy will contain apartments; the rest is now offices and a media center for the Bertelsmann Foundation, a global think tank. 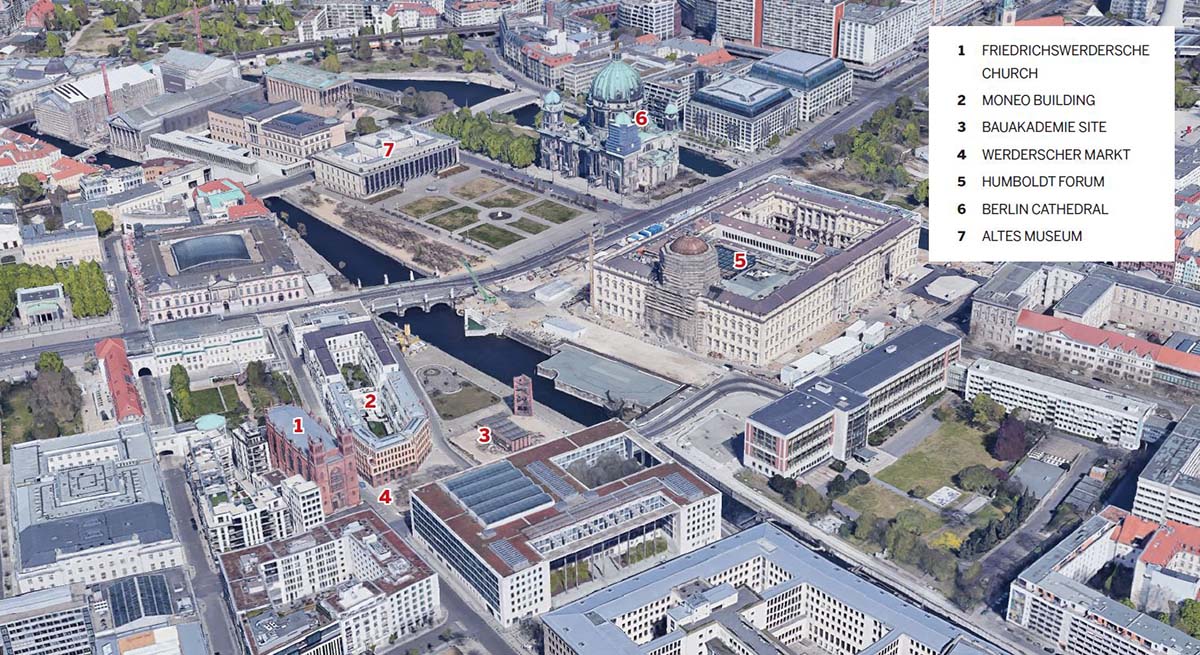 Today, when walking through the restored inner-city blocks, passing such attractions as the Boulez Saal concert hall by Frank Gehry and moving towards the Humboldt Forum or the nearby Museum Island (the site of Schinkel’s Altes Museum), pedestrians come upon Werderscher Markt. Here they encounter the warm and inviting ambience created by brick, stone, and stucco, and charming details like the Bears Fountain, depicting a mother and her rollicking cubs, hewn from rose-toned volcanic stone, as well as the shade from two mature plane trees.

Although Rafael Moneo wishes that his building could be “more accessible to the Berliners,” the site does offer some public access: the deconsecrated Friedrichswerdersche Church houses an exhibition of 19th-century sculpture, and the Building Academy, when rebuilt, will offer programming for architecture and related industries. Nonetheless, for all the tourists and locals who will stream through here in the near future, it is the Werderscher Markt that is a real amenity—not a fawning remake but rather a meditation on the past that allows for a brief pause in the present.

Dominating an island in the River Spree, Berlin’s Humboldt Forum hosted a virtual opening last December. The behemoth museum-cum-cultural center, costing $825 million, occupies the site of the former Berlin City Castle—built between the 15th and 19th centuries, damaged in World War II, and demolished by Communist East Berlin authorities in 1950, who erected their parliament, the modern Palace of the Republic, clad in a tangerine-toned reflective curtain wall, in its place. 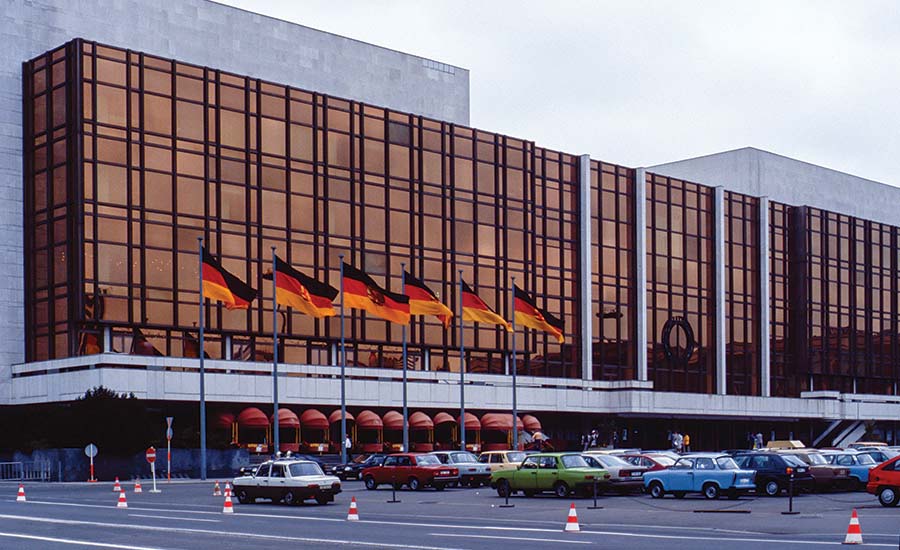 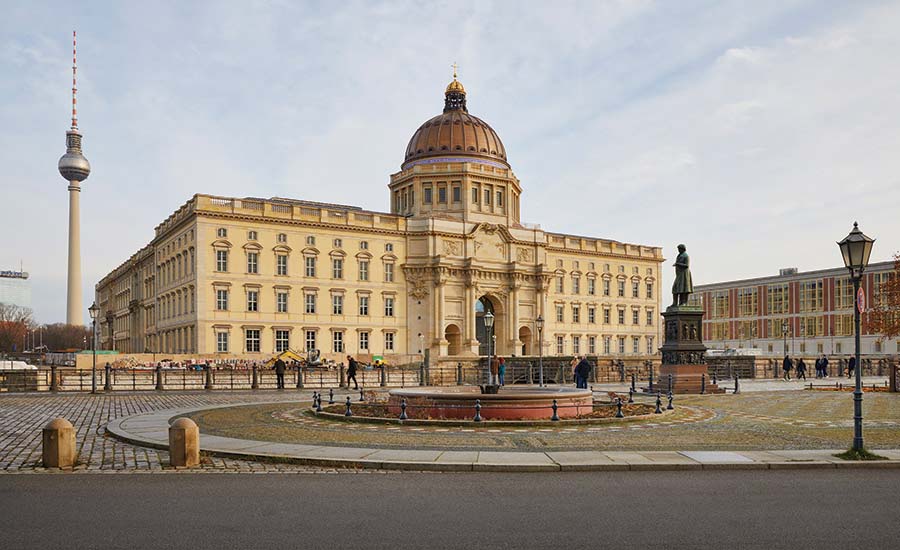 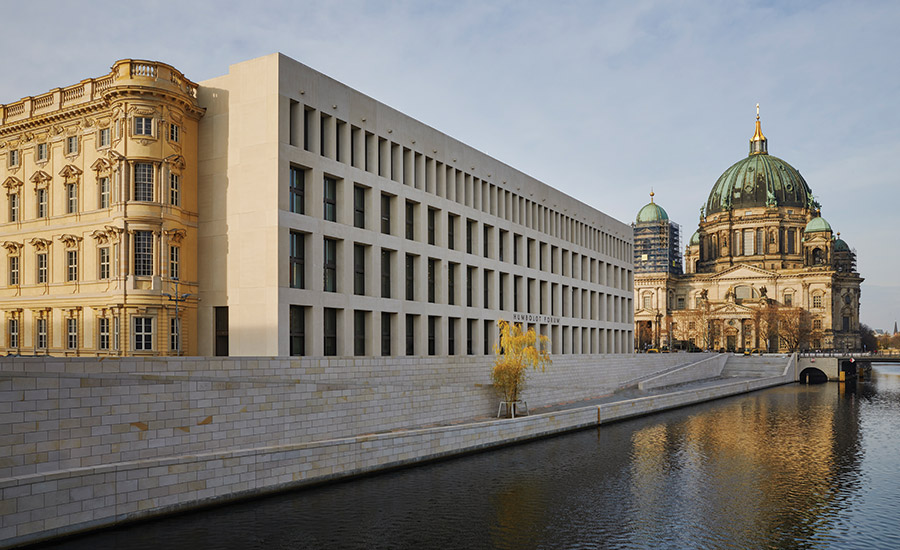 The Palace of the Republic, built by the Communist authorities, was razed (3). Next to the domed Berlin Cathedral, the rebuilt City Castle, now the Humboldt Forum, has Baroque facades (4) and a contemporary one facing the river (5). Photos © Dietmar Rabich (3); Christoph Musiol (4 & 5)

With German reunification, lobbying efforts culminated in the Bundestag’s 2002 resolution to reconstruct the razed castle’s rectangular volume with its three Baroque facades, details from an 18th-century courtyard, and the 19th-century dome, while completing the rest with contemporary architecture. In 2008, a neo-rationalist scheme by Vicenza-based architect Franco Stella won a competition for the project. A former collaborator of Aldo Rossi, Stella was versed in the Berlin context, having judged a 1994 urban-planning competition for the area, which awarded the first prize to a proposal to reinstate the volume of the former City Castle but articulated using modern design.

Displaying exhibits from Berlin’s Humboldt University, City Museum, and Asian and so-called Ethnological collections, the Humboldt Forum intends to address local and global issues, like the linkages between history, cultures, ecology, and colonialism. “Our task is to open up the minds of our visitors,” says director Hartmut Dorgerloh. 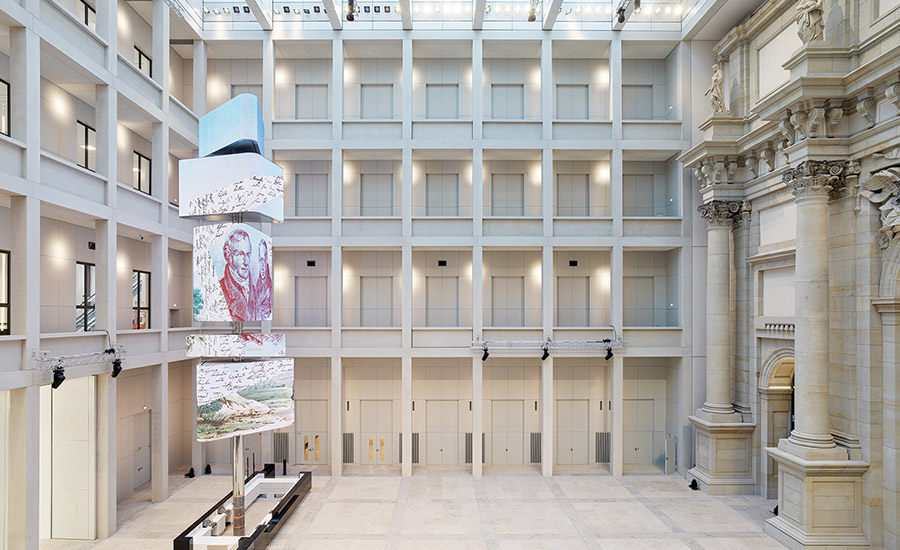 Old and new come together in the interiors also. Photo © Alexander Schippel

Whether the Humboldt Forum’s hybrid architecture is the right enclosure for its ambitious program is yet to be seen. When its plan was first announced, some architects dismissed the facsimile as the “Disneyfication” of Berlin. Now completed, the Baroque sandstone facades have mostly met with approval, while the “cold functionalism” of Stella’s interiors, as the Frankfurter Allgemeine Zeitung remarked, have not.

But the bigger concern involves the long-term pitfalls that such spectacular reconstructions can have in perpetuating historical revisionism. Assessing the result remotely, Michael Z. Wise, author of Capital Dilemma, about the politics and architecture in post-1989 Berlin, notes that the current iteration “goes some way to restoring spatial coherence to one of the capital’s most crucial urbanistic ensembles,” although “it was highly questionable for the Federal Republic of Germany to repeat history’s erasure by the Communists . . . of the original castle with a subsequent razing of the East German parliament.”