The founding of the Goldendale Observatory is the stuff of folklore. A half century ago, four amateur astronomers from Vancouver, Washington, built a telescope, then canvased the Cascade Mountains for a place to put it. Goldendale, a small town 100 miles northeast of Portland, Oregon, just inside the Washington State border, proved to be the perfect spot. Famous for its dark skies, the immediate area was inside a narrow geographical path that would experience three total eclipses within a century, a rarity. The idea of building an observatory—first encountered by locals overhearing a conversation among the astronomers at a diner—appealed to the town as a way to attract tourists. But the boxy, brick-clad structure Goldendale erected in 1973 looked more like rest-stop architecture familiar to drivers pulling off the road than what stargazers should see before staring up at the skies. 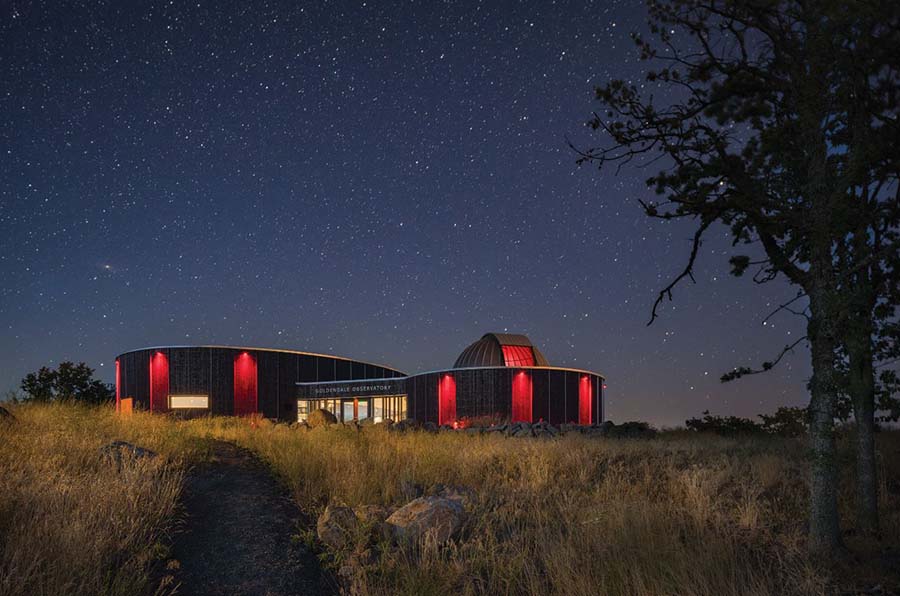 “I was intrigued by the typology,” says Christopher Patano of the Seattle-based Patano Studio Architecture. “It’s not often one gets to design an observatory.” Patano, who had done previous work for Washington State Parks, which had taken over management of the building and site in 1980, transformed the two existing square rooms—one to house the telescope, the other a small classroom—into a pair of rounded bodies seemingly in orbit, with a glazed lobby between as the embodiment of gravity pulling at them. As the architect points out, “There are no right angles in space.”

Patano clad the small circle and larger ellipse in wood, punctuated every 5 feet or so by vertical aluminum fins that offer a sense of direction and scale, and act as expansion joints over the rainscreen assembly, though the siding’s charred shou sugi ban finish repels water and reduces movement in the wood.

Movement was definitely something to avoid, given the sensitive nature of the telescope. There is no mechanical equipment in or on the structure; all heating and cooling lines are buried underground. And the all-electric building—perched atop the highest hill in the area with views of the Cascade Range’s famous volcanic peaks, Mount Hood, Mount Adams, Mount Rainier, and Mount St. Helens—takes advantage of the substantial wind and hydropower harnessed in the Pacific Northwest. 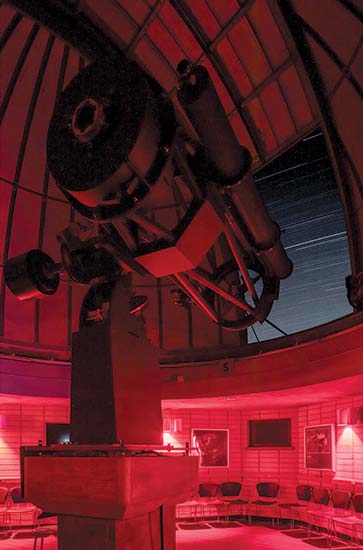 The dome-topped circular portion of the building actually encases the original brick box around the telescope, with ample capacity for substantial cellulose batt insulation and air space to prevent heat gain, since the telescope has to be the same temperature as the outside air. (The new roof aids in that effort as well.) The diamond-shaped room housing the telescope, deemed historically significant, was untouched in the renovation, aside from cleaning the brick and installing new lighting and didactic panels. “It’s like a time capsule,” remarks Chris­topher Carlson, construction project coordinator for Washington State Parks. Likewise, the almost 50-year-old aluminum dome, a catalogue item, was retained after some cleaning and sandblasting, with the pneumatic pistons that slide its aperture open still functioning. 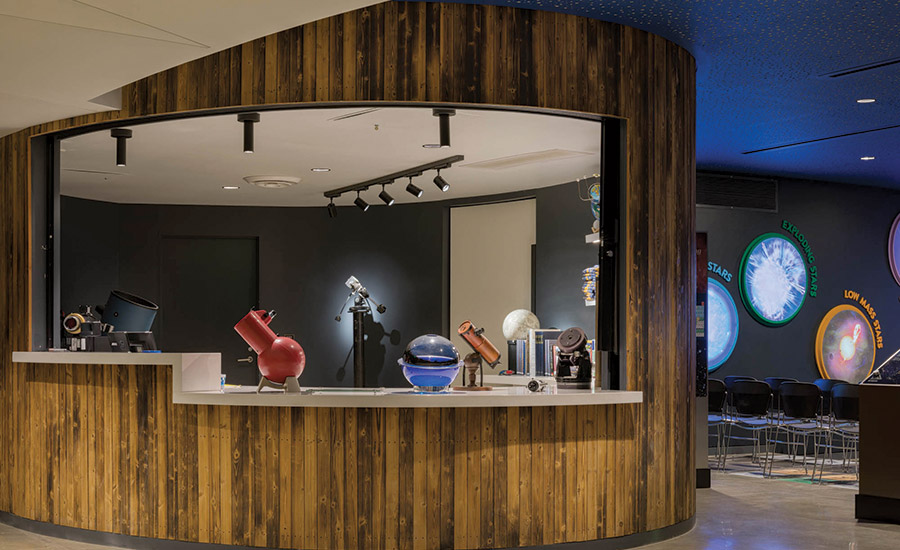 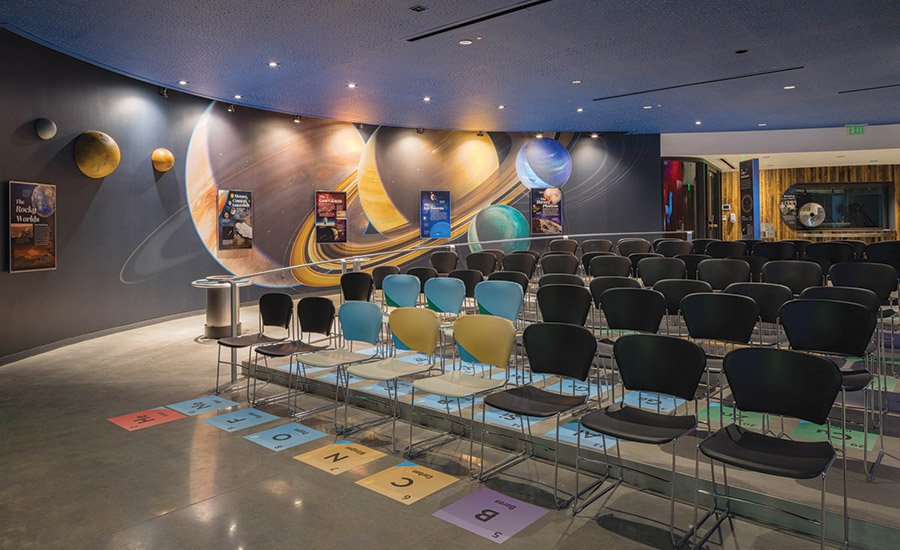 Behind a small retail space (1), seating in the auditorium aligns with the 118 elements of the periodic table (2). Photos © Ed Sozinho

The ellipse, on the other hand, has been constructed from the ground up, and replaces a “dump of a room,” as Patano called it. “We could barely accommodate 40 people, and now we have room for over a hundred,” says observatory administrator Troy Carpenter, who applauds the openness of the now 4,000-square-foot facility. “The previous hallway was a choke point.” The 118 seats in the new ramped auditorium—in which three 100-inch screens display live telescope views and celestial-themed shows—correspond to each of the elements of the periodic table. The curving walls around them feature an interpretive exhibition design. Above the auditorium and its adjacent restrooms, office, and retail space, the architect designed extra-deep parapets for a future rooftop viewing platform. 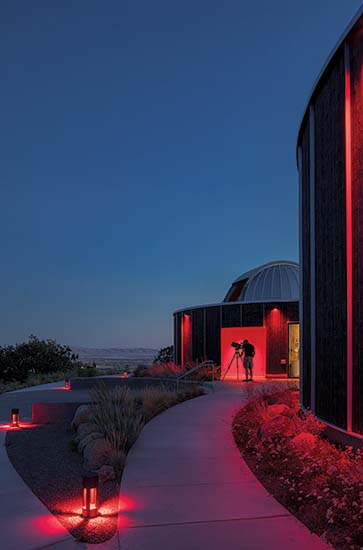 The $2.4 million renovation included a redesign of the grounds, whose xeriscaping requires minimal maintenance, benefiting the lightly staffed organization. (Many visits are self-guided.) Significantly, the road and parking lot were moved to avoid car headlights’ disrupting nighttime stargazing outside. Newly installed red-hued lighting on and around the building is compatible with viewing the sky in the otherwise complete dark. Interpretive design elements are sprinkled around the building; there is a human-scaled sundial, for instance, in which a person acts as the gnomon casting a shadow.

The building and landscape were not the only elements to see changes. Though not used for research but for school groups and afficionados, the original telescope itself—one of only a few in the country that allows visitors to climb a stairway and look through its eyepiece—received some serious upgrades, including a new 24½-inch-diameter mirror. Converted from a Cassegrain to a Newtonian telescope, it is now more versatile, operating at high and low magnification. The improved instrument, along with the expanded interior and all it has to offer, makes science accessible to the public in ways both practical and exciting, bringing the stars down to earth.