Frick Madison Brings a New Look to the Breuer

On March 18 the Frick Collection will open the doors to its temporary home in Marcel Breuer’s modernist ziggurat museum on Madison Avenue in New York. It will be the first time that a significant portion of the institution’s holdings of old master paintings, Renaissance sculptures, and European decorative arts will be exhibited outside the walls of its Upper East Side mansion.

The move is precipitated by architect Annabelle Selldorf’s renovation and expansion of the Frick’s original home, built in 1914 by Carrère & Hastings for the industrialist Henry Clay Frick. Over the next several years, much of the 1,500-piece collection will be placed in storage in the confines of the Breuer structure, while roughly 300 of the Frick’s works of art are displayed on three floors of its galleries. Selldorf, the founding principal of Selldorf Architects, has been in charge of the installation, along with Frick curatorial staff, led by Xavier F. Salomon, and its longtime exhibition designer Stephen Saitas.

The Breuer building, which originally housed the Whitney Museum of American Art and opened in 1966, was leased by the Metropolitan Museum of Art for the last five years, and became known as the Met Breuer. Now named the Frick Madison, the Brutalist architecture houses the collection’s highlights, organized geographically and chronologically. A series of gray-walled galleries, designed by Selldorf and the team, propel guests counterclockwise, while floor-to-ceiling openings and cross-vistas tease new connections between works of art that have previously only been seen in a dense residential setting. On the second floor, for example, three 16th- and 17th-century Dutch master portraits in three different galleries can be observed simultaneously, as if a Hobbema, Rembrandt, and Van Dyke are successively taking one’s hand.

The third floor is dedicated to works from Spain and Italy, while the double-height fourth floor features British and French paintings. Each level opens with a significant sculpture, or several pieces, such as the three rare Italian marble busts that greet visitors on the third floor. By Laurana and Verrocchio, they date to the 1470s. The curators strayed from the exhibition’s organizational logic in some places so that certain objets d’art and furnishings could be seen in isolation. These include fragile 17th century Indian carpets, bronzes, tiered shelves of porcelain lined up like sumptuous lacquered candies, and exquisite clocks (often overlooked amidst the abundance of visual riches at the Frick mansion).

The architect and curatorial team chose the art first, and then decided on the armature to contain it, said Salomon on a recent tour. They hung paintings sparsely, one or two to a wall, allowing guests to have the space and time to contemplate details and for each piece to luxuriate in its narrative. Saitas placed panels behind some smaller works to help better anchor them against the wall planes. Larger canvases, hung higher at the original Frick, are inches from Breuer’s wood or stone floors, creating the illusion of entering the scenes.

There are no barriers or lines to keep visitors from getting almost as close as they want to the art, and very few vitrines, maintaining the accessible atmosphere that can be found at the Frick mansion. (Well-trained guards in each gallery will let visitors know when they are a bit too close). And there are no texts or titles, adding to the drama of Selldorf’s substantial gray walls that make transitions between rooms more noticeable. Instead, guests can access from their own phones a free curator-led mobile guide on the Bloomberg Connects App.

The Met leased the Breuer building in 2015 to expand its Modern and contemporary art presence, and preservation architects at Beyer Blinder Belle carefully and surgically restored and cleaned the interior; the building is not landmarked but is protected by its inclusion in the Upper East Side Historic District. When the Met presented its 2016 exhibition “Unfinished,” which began with Renaissance masters, it was the first time the mid-century modern, granite-clad Breuer had played backdrop for non-Modern works, and it provided a hint of just how good the contrast could be.

For more inspiration, the Frick’s curatorial team traveled to Louis Kahn’s Kimbell Art Museum in Fort Worth, Texas of 1972, the 1970 Brutalist addition to the 1694 Besançon Museum of Fine Arts and Archeology in France, Donald Judd’s foundation in Marfa, and the Calouste Gulbenkian Museum in Lisbon of 1969. The tour gave the curators clues about how to achieve a balance between the architecture and the art, as did Selldorf’s extensive experience with installations and exhibitions.

“I was happy that the curatorial team all understood that this was a sort of restrained circumstance, as opposed to minimal—that’s not what the issue is,” said Selldorf in a phone interview. “My strongest sentiment is that with this installation we proved that the Breuer is just a fantastic building and it can be a companion to this incredible old master painting collection. It was designed in a rigorous fashion and allowed us to lay out the spaces to both respect the architecture and foreground the art.”

Selldorf described the collaboration with the Frick as a highlight of the last year, and one marked by inclusiveness and a complementary fluency with each other’s expertise. The only point at which their opinion seems to have differed was on paint color. Salomon is adamant that Old Masters “look terrible,” on white walls; Selldorf laughs and says she “begs to differ.” “I have a beautiful 17th-century Dutch master on a white wall that receives north light and its absolutely spectacular.” They quickly came to an agreement, however, on a palette of grays that would punctuate the paintings. 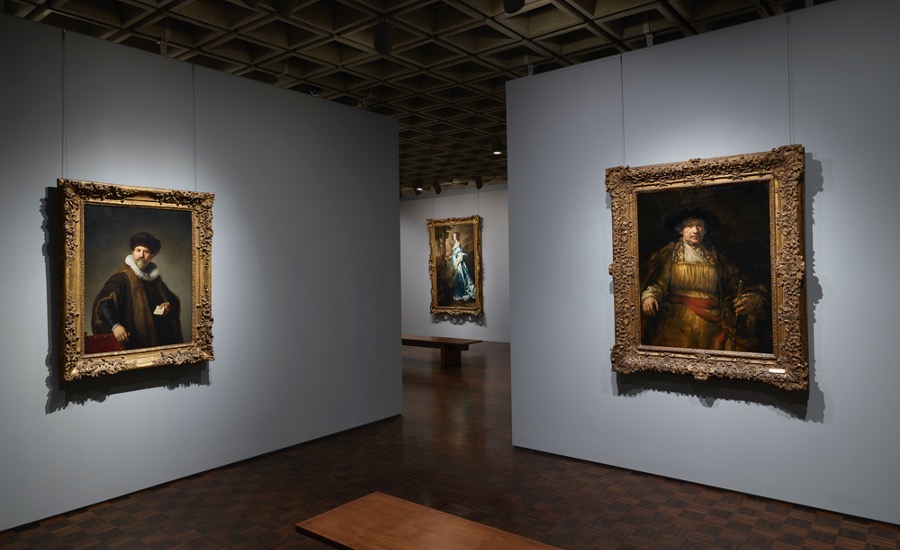 In this second-floor gallery, Rembrandt’s Nicolaes Ruts (1631) may be compared with the much later Self-Portrait (1658). Photo: Joe Coscia

The team paid special attention to Breuer’s trapezoidal windows. On the third and fourth floors, they are paired with his original Whitney benches and some of the Frick’s most beloved pieces. Giovanni Bellini’s St. Francis in the Desert from the 1470’s hangs in isolation adjacent to a window, natural light merging with manmade.

The denouement of the exhibition is two fourth floor rooms containing all 14 of Fragonard’s Progress of Love canvases. Four, in tones of greens and blues, were painted from 1771-72, depicting stages in the love affair between a young couple for Madame du Barry, the last mistress of King Louis XV. For unknown reasons, she rejected the canvases and Fragonard stored them in his studio for the next twenty years, at which point he completed the scheme with 10 more pink-toned panels. At the original Frick they were displayed out of chronological order, but here at the Frick Madison they are shown in the sequence in which Fragonard painted them. Opportunity, rather than compromise, was Selldorf’s guiding principle. “We weren’t looking to create domestic settings but rather showcase the artwork,” she said. “I’m a great believer that art relates to the circumstance in which it is perceived, but also stands on its own two feet.”

The Frick Madison is opening after a year of painful lapses in live, cultural experiences, and with people aching to travel—literally and figuratively—beyond their own walls. The Frick’s own voyage to a new setting will bring it fresh and expanded views. 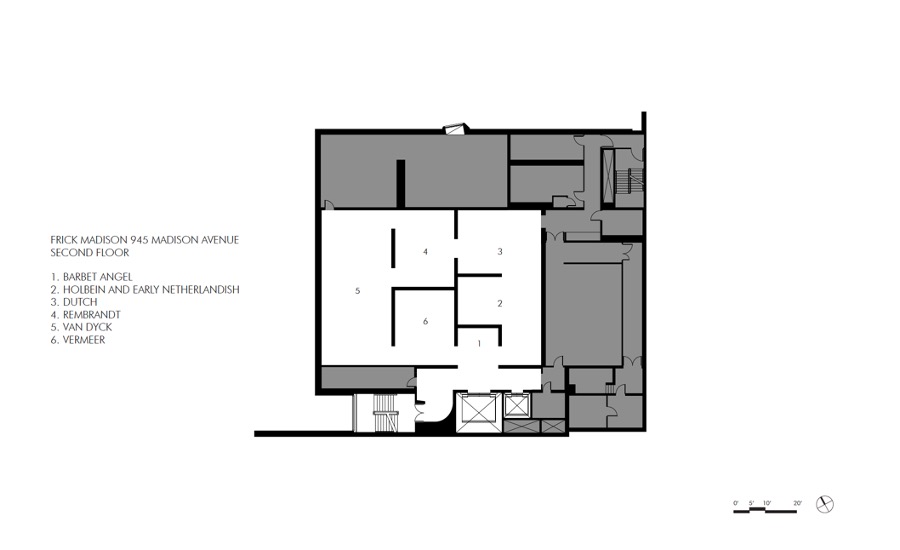 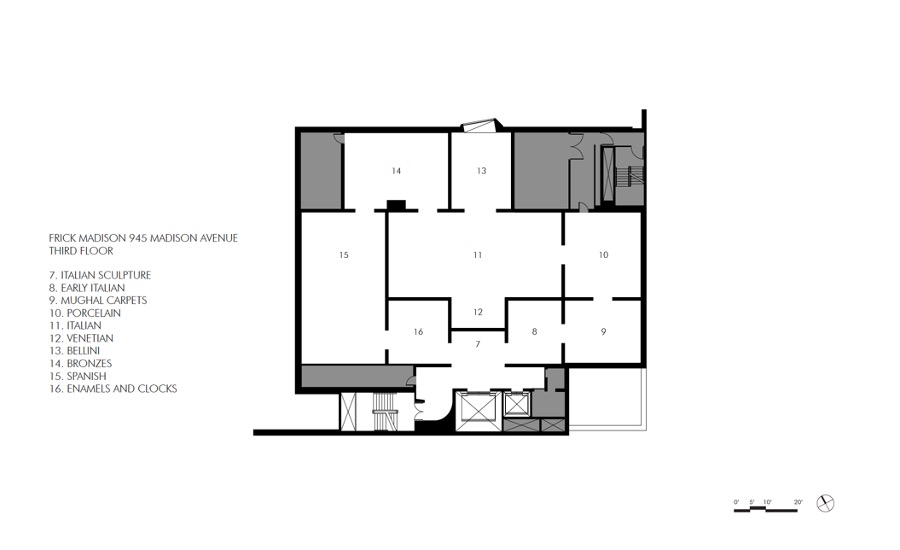 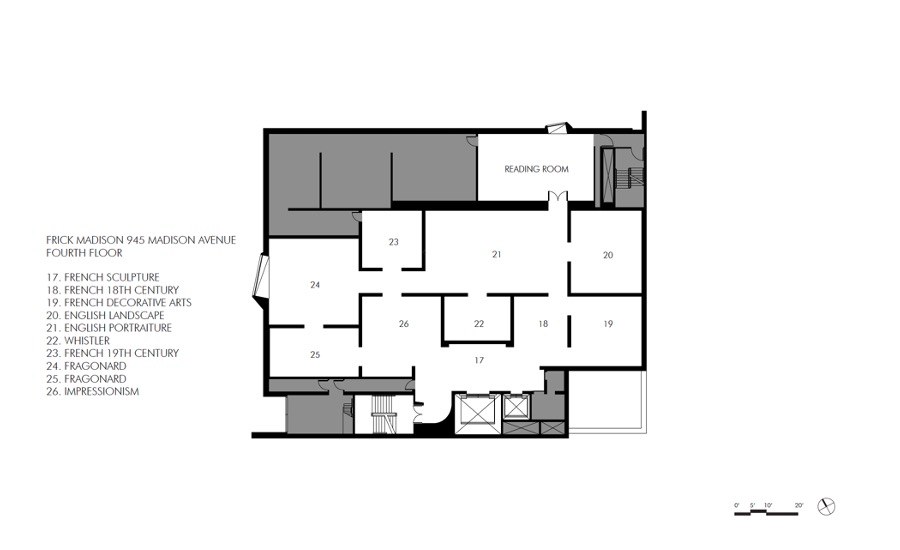