When Richard Meier’s Museum of Contemporary Art (MACBA) opened in Barcelona in 1995, it was as if a giant white cruise ship had docked in a medieval fishing village by the sea—the slick behemoth clad in enameled-steel panels an overwhelming, and for many an unwelcome, presence among the narrow streets and modest stone structures in the Catalan capital’s Raval neighborhood, just across from the historic center’s Gothic Quarter.

Now, an extension to that museum, which takes a decidedly different approach, has been unveiled. Designed by Basel-based Christ & Gantenbein (C&G) together with Barcelona-based H Arquitectes, the 19,000-square foot new brick volume will sit opposite the existing museum, across the Plaza des Angels, with a below-grade link planned. The terraced, open building housing new galleries, shops, and public spaces is a gesture of “urban repair,” according to Emanuel Christ, C&G founding partner along with Christoph Gantenbein. “The Meier building is freestanding and autonomous; it has its qualities, and its shortcomings,” Christ says. “This project tries to compensate for the lack of connections by weaving into the city fabric.” A 15th-century chapel and convent are also part of the scheme, and will be transformed to become the museum’s entrance hall with many public-facing uses. 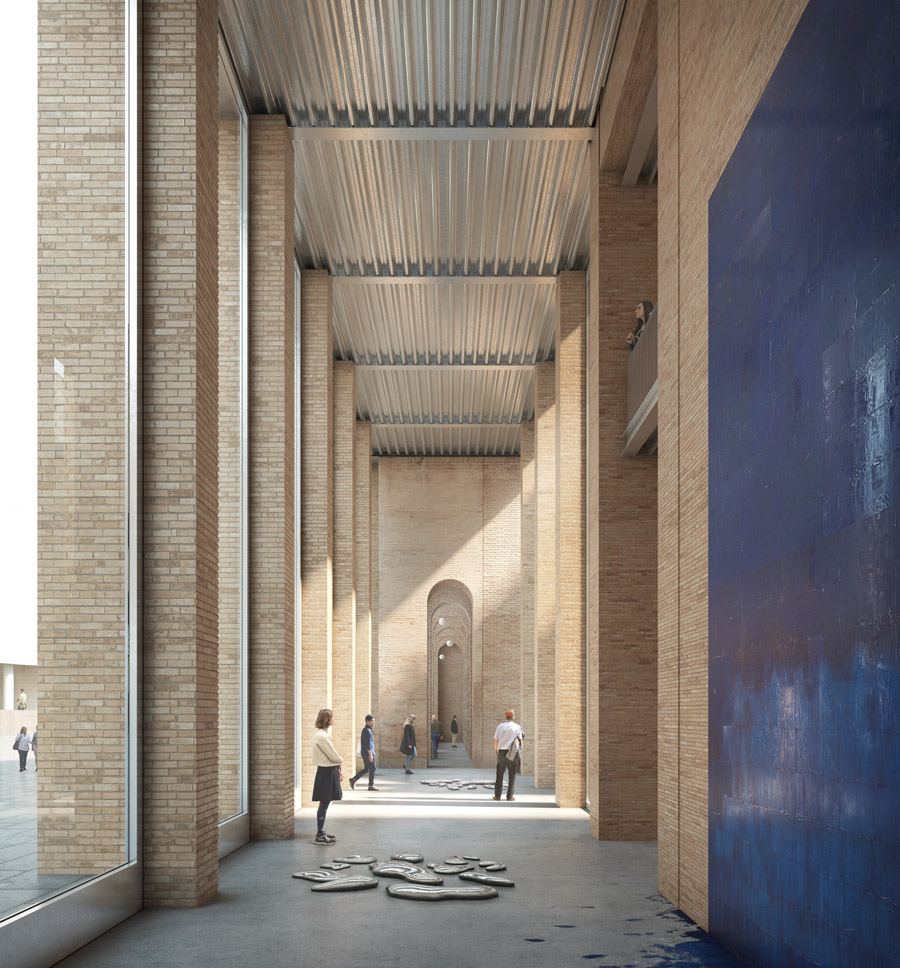 Firmly rooted in Barcelona, H Arquitectes’ four partners—David Lorente Ibáñez, Josep Ricart Ulldemolins, Xavi Ros Majó, and Roger Tudó Galí—all studied architecture there and have built extensively in and around the city, also teaching at local universities, since founding the office in 2000. After an earlier attempt at a collaboration with C&G for a project in Bilbao that did not materialize, H Arquitectes reached out to the Swiss firm for this competition, announced in late July. The Barcelona architects had refurbished several heritage buildings in the city, experience required for this project, and C&G—known for acclaimed extensions to the Swiss National Museum in Zurich and the Kunstmuseum Basel—brought experience on large cultural projects, also a must to enter the competition. The team beat out a later short list that included British firms David Chipperfield Architects and Caruso St John Architects, and Tuñón Arquitectos of Madrid, each in collaboration with local studios, as well as Barcelona-based Barozzi Veiga.

“The Meier building made sense 25 years ago and was important in creating something fresh to transform El Raval,” says Ros Majó of H Arquitectes. The MACBA addition, on the other hand, is a contextual, human-scaled, and permeable structure that interfaces between the plaza and the chapel, hoping to establish a true dialogue between new and old.