Most of the great museums built around the turn of the 20th century have been added to, some numerous times. The 640,000-square-foot 1928 Philadelphia Museum of Art is an exception. Although many of its interior spaces had been altered, the honey-toned Kasota-limestone exterior remains almost unchanged from when it was completed by Horace Trumbauer and his senior designer, the African-American architect Julian Abele, in collaboration with Zantzinger, Borie, and Medary. Presiding over the city from its highest point, a Greco-Roman temple, enlivened by polychrome terra cotta, forms the heart of the museum, from which extend two gallery wings that enclose a terrace atop a monumental stair that faces downtown. As Philadelphia’s most prominent building, adding to it is deemed inconceivable. 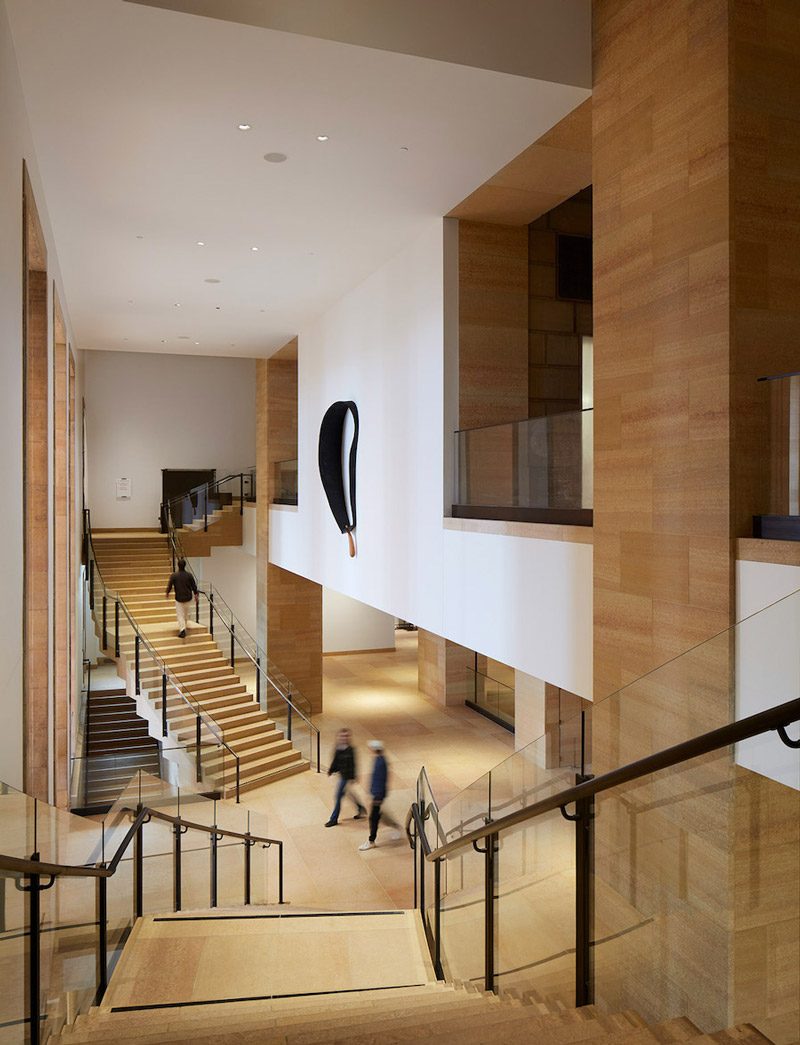 Nearly 20 years ago, Anne d’Harnoncourt, the museum's then-director and CEO, proposed to Frank Gehry that he replicate the galvanizing effect of his Guggenheim Bilbao by digging beneath the museum. The idea did not strike the architect as peculiar. “I said, give me the problem,” recalls Gehry, now 92. “I’m ready.”

It has been a long road from Gehry’s hiring in 2006 to bring a key element of the museum’s facility masterplan to fruition. On May 7th, the museum opens the $233-million Core Project, in which Gehry swapped his trademark sculptural bravura for a series of surgical renovations, most within the “temple” that unites the wings. “We had to restore the axial logic that had been lost over time,” says current museum director and CEO Timothy Rub. 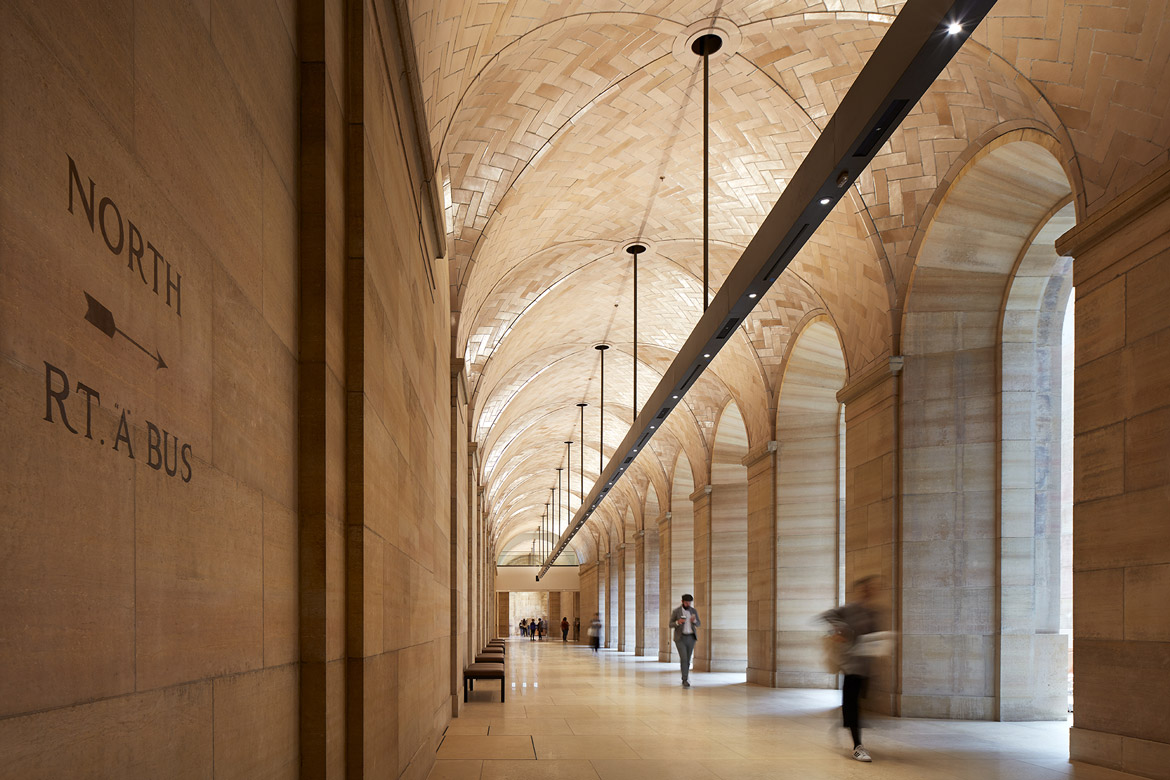 The 640-foot-long Vaulted Walkway, with its Guastavino tiled ceiling, was partially reopened in 2019. It had been closed to museum visitors for decades. Photo © Steve Hall, Hall + Merrick Photographers, courtesy Philadelphia Museum of Art, 2021

In expanding the museum downward to the level of surrounding streets, Gehry’s team had to confront confusing circulation: The Great Stair Hall rises majestically through the second and third floors, its purpose to orient visitors and feed them into galleries. Yet it fronts the outdoor terrace, with its city views, on the east, while visitors enter the building from the “back”—or west-facing lobby—one floor down.

To bring clarity to the circulation between the east and west, Gehry opened portals through a solid wall behind the newly restored double-height lobby so that visitors could orient themselves with a view into the Stair Hall and below, to the new Williams Forum, a 40-foot-high exhibition and event space created by demolishing a first-floor auditorium and excavating down to the street level.

The designers punched windows at the top of the Forum and created a new pathway around it, thereby opening a direct route to existing elevator shafts on each side of the new soaring space (one shaft never having been used until now). They brought the experience of the art closer to the entrance by replacing first-floor museum services with a pair of gallery suites (one introducing early American art, the other devoted to contemporary work) totaling 20,000 square feet. 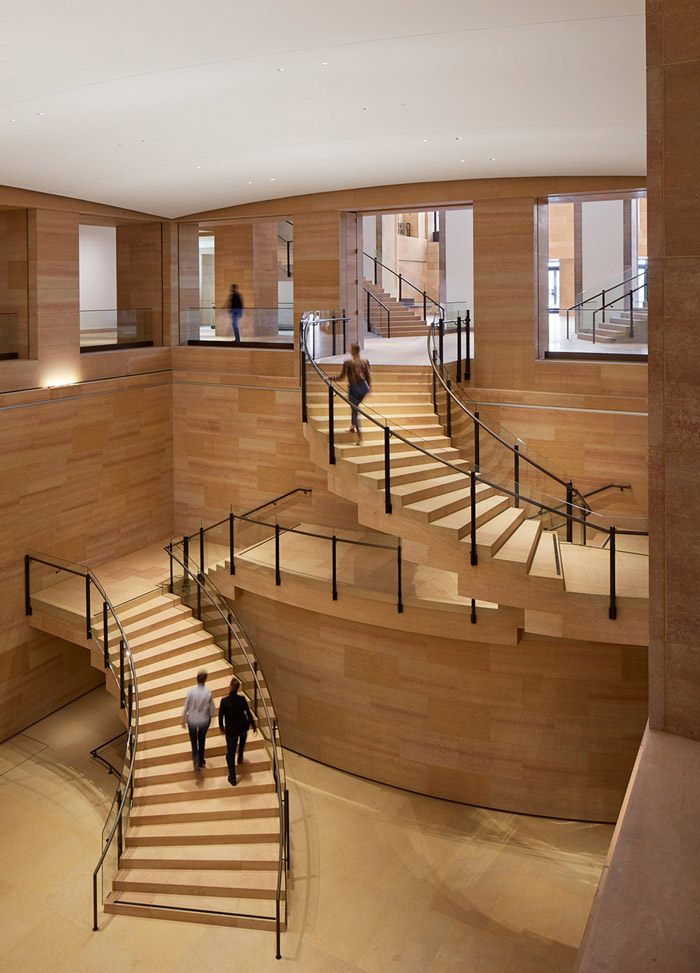 To enhance vertical circulation, a pair of new, stone-clad stairs invitingly curves up from the first floor, opening directly into the Great Stair Hall. Another stair cantilevers as it twists downward into the Forum.

The Forum now anchors the Vaulted Walkway, a stone-faced awe-inspiring tunnel original to the building with a ceiling of arching Guastavino tiles. Closed to the public for almost 50 years, the northern section was opened in 2019 to a restored North Entrance, easing access to the surrounding streets and the Perelman Building, a grand 1926 insurance headquarters that the museum revamped and took over in 2007. Now visitors can experience the Walkway’s entire 640-foot length as its southern section has been restored, including a new exhibition space as part of the Core Project.

The detailing in this project is so refined as to be nearly invisible. Ventilation air moves through circular openings discreetly cut into the tiled ceilings of the Vaulted Walkway, around slim pendants that conceal uplighting and other systems. Wheelchair ramps have been seamlessly integrated into steps outside the west entry. Thick piers at the lobby vestibule were slimmed into round columns to ease movement. “I did not go to Philadelphia to do a trivial little piece of Frank Gehry sculpture,” the architect says. “We enhanced the original vision to work in today’s world.”

The new internal circulation through the Forum will truly come into its own in a future phase, with timing to be determined. East of the Vaulted Walkway, below the outdoor terrace, Gehry has prepared a design to add an auditorium, new galleries, and visitor services, beneath a shallow domed ceiling, with gardens sunk along the edges of the surrounding wings to bring in light. A window through the terrace steps will offer a view to the city. That project would complete the vision of d’Harnoncourt, who died suddenly in 2008. “The whole idea with Annie was to re-establish the existing beauty of the building,” says the architect.

“A comprehensive master plan can’t be done over five or even 10 years,” explains Rub. “It’s generational, as the original building was.” The Trumbauer-Abele design took ten years to construct and was at first vastly oversized for the museum’s holdings. Several directors over decades amassed the museum’s extraordinary collections. Adds Rub, “It was a bit of a “Field of Dreams.” They built it, and the art came. 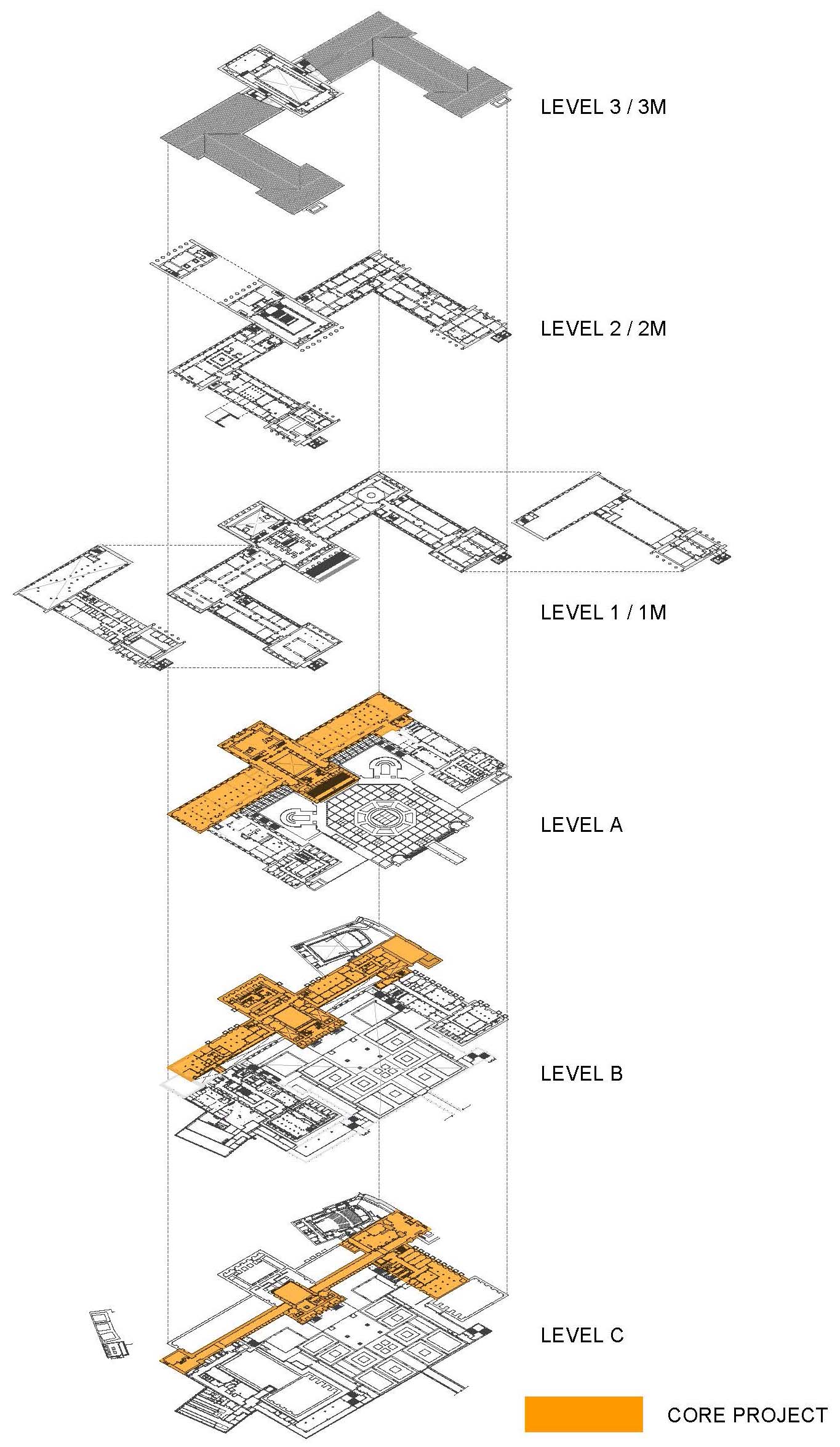 An axonometric diagram highlights the areas of the museum included in the Core Project. Image © Gehry Partners, click to enlarge.

Gehry has designed additional galleries below the east terrace to be built as part of a future phase of the museum’s master plan. Image © Gehry Partners, LLP and KX-L, 2016, courtesy Philadelphia Museum of Art, 2021 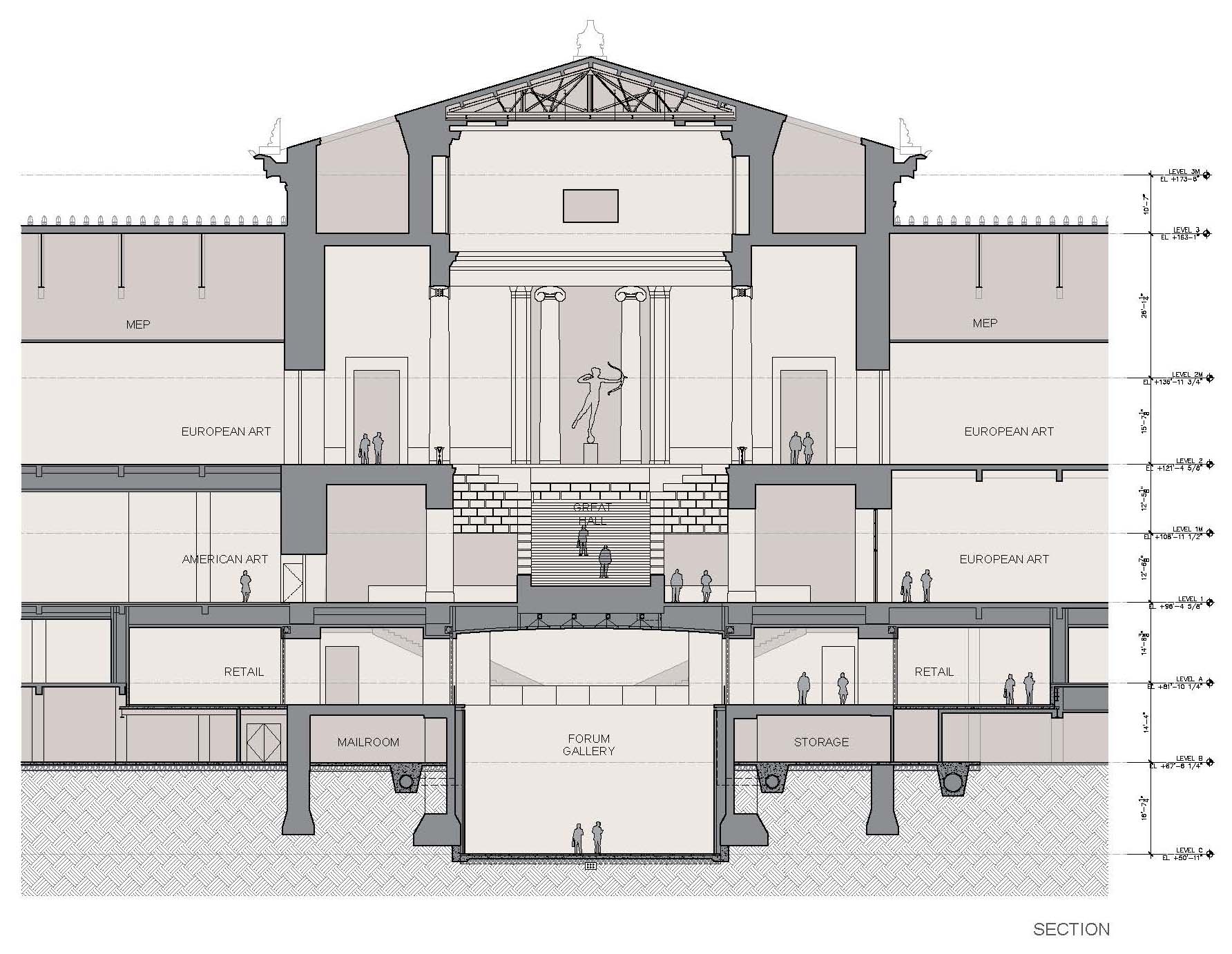 A section shows the relationship between the Great Stair Hall and the new Forum. Image © Gehry Partners