Since his Burton Barr Phoenix Central Library opened in 1995, Will Bruder has been the architect library officials call whenever the 280,000-square-foot building needs an update. The area that once housed microfiche, for instance, became College Depot, a student-resource center, and the antiquated reference collections were consolidated so that the building could accommodate a makerspace. Bruder has been able to bring the building into the 21st century without compromising his architectural vision, of which flexibility was a key part.

In fact, the library, with two parallel facades of weathered copper, may have achieved Mies van der Rohe’s idea of universal space as successfully as any public building in memory. That’s one reason it has stood the test of time—and is now the winner of the AIA’s prestigious 25-year award, which in the past has gone to Frank Lloyd Wright’s Guggenheim Museum, Louis Kahn’s Exeter library, and Philip Johnson’s Glass House, among others. 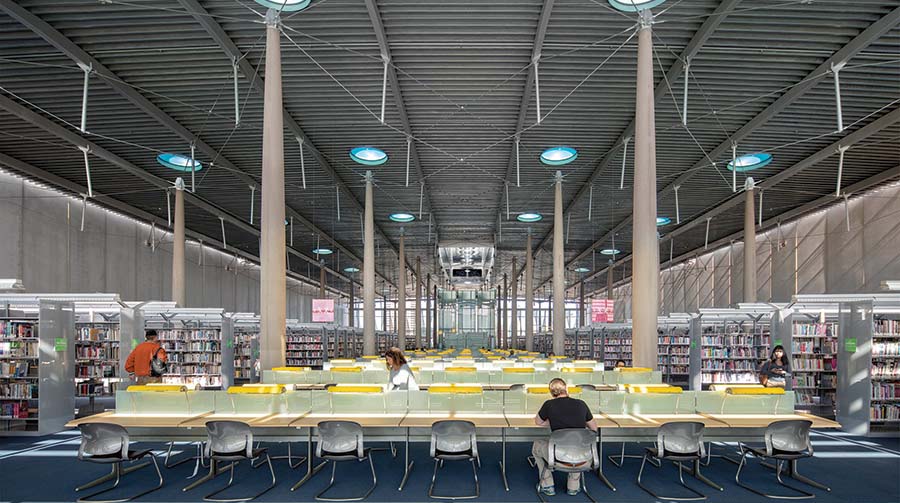 “It’s great that it’s getting the recognition it deserves,” says Billie Tsien, who, with her husband, Tod Williams, designed the Phoenix Art Museum a couple of blocks away. “It’s a symbol of Phoenix, a city-making building,” Williams added. Its copper covered east and west facades are almost geologic in scale and bearing, which is why the building is sometimes compared to a mesa. Its north and south facades, by contrast, are almost entirely glass.

The building’s parti couldn’t be simpler. Stainless-steel notches in the long copper walls mark entrances that lead to a small atrium, or “canyon of glass,” which contains three glass elevators and a stairway with “comfortable 6-inch risers, so people want to climb it,” Bruder says. The rest of the ground floor houses various library services. The second, third, and fourth floors are devoted mainly to bookshelves, reading rooms, and classrooms; the fifth floor is a single reading room that can accommodate 320 people. Of the easily understood diagram, Bruder says, “Clarity to its public is the building’s first deliverable. People don’t need help to find anything in this building.”

The library was built for $98 a square foot, which, even then, Bruder says, “people didn’t believe could happen.” True, some parts look utilitarian. But there are generous aspects to the building, especially its fifth floor, a full acre with a 30-foot ceiling. North- and south-facing glass walls give residents views of Phoenix that, at least until a recent high-rise boom, they couldn’t get elsewhere. And, working with engineers at Arup, Bruder created a “roof that floats on light.” Skylights, each 6 inches by 250 feet, along the top of the two long facades, and additional skylights circling the 28 tapered concrete columns, mean the roof appears to be unsupported. The fifth floor attracts not just readers, but visitors drawn to dazzling effects as the sun moves through the sky.

In 1988, when the city announced plans to build a new library, Bruder had only two employees. One was Wendell Burnette, who, he says, became his “key collaborator” on the project. To compete against 24 other firms, including those of Antoine Predock and Ricardo Legorreta, Bruder formed a joint venture with DWL Architects & Planners. He also persuaded Arup to join his team and, “being an only child,” he joked, not join any others.

After he was selected, Bruder spent a lot of time listening to the client (“The head librarian was looking for a warehouse for a million books”) as well as to the public. He says he organized 28 public meetings on his own initiative.

Bruder is especially proud that the building has become “a poster child for sustainability.” Years before the debut of LEED, he insisted on 12-inch-thick concrete walls to reduce air-conditioning loads, automated solar-tracking louvers on the south facade, a natural gas chiller system for the HVAC, and other green features.

These days, Bruder, 75, lives with his wife in Portland, Oregon, and is working on a couple of big projects. “Will never had kids, but in the library he created all these wonderful places for children,” notes Tsien. “It’s one of the most humane big buildings I know.”