By now this salient fact has been hammered into architects’ heads: buildings account for nearly 40 percent of carbon emissions. But most professionals don’t know how to change that number fast. Shrinking the built environment’s share of the carbon pie requires a host of measures, from efficiency upgrades to using low-carbon materials and cleaning up the grid—a complicated list. But one straightforward solution is to make more buildings zero energy. And, with the United States facing a severe housing shortage, the residential market presents an opportunity to tackle both the climate crisis and the need for shelter.

Zero energy construction is a fledgling market, but one with a steep growth curve. The nonprofit New Buildings Institute says that zero energy commercial buildings across the United States and Canada now encompass 80 million square feet, a tenfold increase since 2010. In the North American residential sector, the Energy & Environmental Building Alliance (EEBA) counted 28,000 zero energy housing units by the third quarter of last year, up 26 percent since the organization’s last tally in 2018.

Aaron Smith, CEO of EEBA, predicts that the growth will accelerate. He notes promising indicators, such as construction of zero energy housing across climate zones, not just in California, where environmental conditions in much of the state are especially well-suited to such buildings. Significantly, he also sees shifting attitudes among home buyers, with eco-conscious millennials coming into the market. And he cites the tightening of energy codes, which has the effect of reducing the cost differential between standard and zero energy construction. Other sources point to the falling price of photovoltaic (PV) solar panels, which are necessary to just about every zero energy building. Since 2010, the installed costs of residential PV systems has dropped 64 percent per watt, a factor primarily of improving generating efficiencies, according to the National Renewable Energy Laboratory.

So what is a zero energy building (or, in the longer form, a net zero energy building)? Basically, it is a structure that, over the course of a year, produces at least enough renewable power on-site to meet its own energy requirements. A house—or any building type—can’t technically be considered zero energy out of the gate, when its occupants first turn the key in the door. In order to declare a net zero balance between generation and consumption, a project must be monitored for at least 12 consecutive months, through all four seasons. But getting to zero often takes longer, requiring a period of measurement and observation, tinkering, and adjusting.

Three new and renovated houses demonstrate the varying challenges of different climates and settings to attaining net zero energy operations: a recently completed vacation home turned full-time Covid retreat in Vermont’s Green Mountains; a renovation and expansion of a brownstone in a dense Brooklyn neighborhood; and the reinvention of a 1970s house overlooking Puget Sound in Seattle.

Designing a zero energy house, as this trio of projects shows, requires more than plunking down an impressive number of PVs on the roof. At least as critical as energy production is conservation through efficiency, with strategies such as proper orientation on the site, a thermally robust envelope, and right-sized mechanical systems. “Those are the hardest parts to change later,” points out architect Bill Maclay, author of the book The New Net Zero: Leading-Edge Design and Construction of Homes and Buildings for a Renewable Energy Future. “You can always add more solar,” he says. 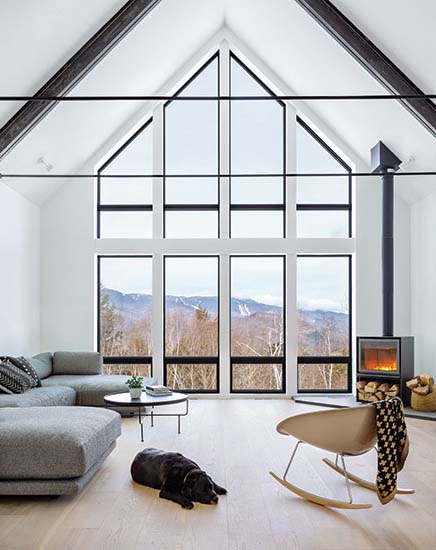 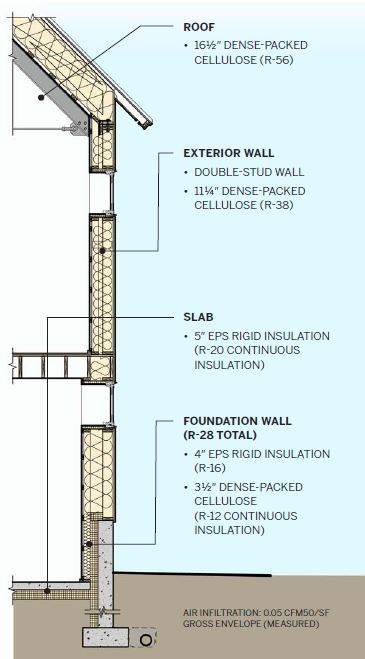 A house in Vermont’s Green Mountains (top and above), designed as a vacation home, has become a full-time Covid retreat, altering its expected energy-use profile.

The Green Mountain house illustrates this philosophy. Designed by Maclay’s eponymous Waitsfield, Vermont–based firm as a second home for a New York–area couple and their college-age children, the 2,200-square-foot, three-bedroom house, with a 500-square-foot guest apartment above the garage, sits on a hillside. The bedrooms are tucked into the site’s slope, below the loftlike wood-and-steel-framed living spaces, which offer a view north, toward ski trails.

Shaped with the aid of extensive energy modeling, the house features an airtight and well-insulated envelope, with an R56 roof, R38 walls, an R20 slab, and generous triple-glazed windows. This robust enclosure allows the interior to be comfortably conditioned with heat-recovery ventilation and an air-source heat pump.

The energy-use data that Maclay’s firm has collected thus far is preliminary but indicate that electricity production from the 12kW rooftop PV array will fall short of consumption. That was not entirely unexpected. One factor is that the house was conceived for intermittent occupancy, but the family has been living there full-time since soon after completion in early 2020, finding rural Vermont more conducive to pandemic life. In addition, due to the structure of the state’s solar credits, homeowners have no incentive for producing electricity they will not use. Therefore, Maclay’s firm will sometimes initially undersize their projects’ PV systems, as was the case here. Once the architects saw the actual energy use with the family in the house full-time, “adding solar to the garage roof was considered a way to offset that,” says Chris Cook, Maclay Architects project manager.

After the new solar array is in place, the house’s systems, which are all-electric, including those for space conditioning, cooking, and hot water, as well as plug loads, should be covered. Cook notes the living room’s wood-burning stove has not been included in the energy equation. The family used only a quarter of a cord of wood this past winter, she says: “It is for hygge, or mood, not for heating.”

Projects in dense urban settings present different problems, typically offering only limited area for PVs. Take the three-story 1899 brownstone rowhouse in the Carroll Gardens section of Brooklyn that Michael Ingui, partner at the New York firm Baxt Ingui Architects, recently renovated and expanded for his own family. Ingui enlarged the house from 2,600 to 3,400 square feet by adding a mansard above the historic cornice and extending the house at the back, reusing the brick of the original rear facade. He made the mere 16-foot-wide house feel airy by removing part of the parlor-level floor plate, creating a double-story volume above a dining area. 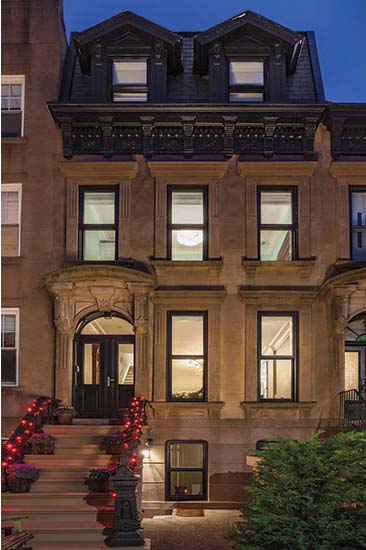 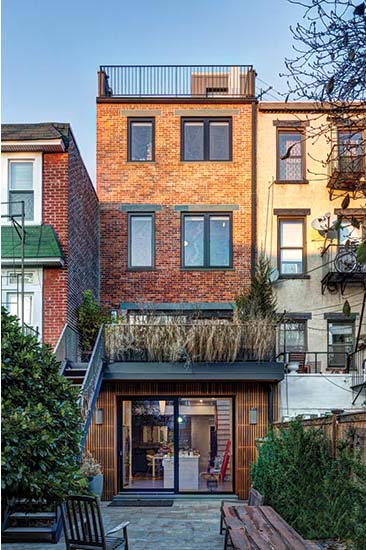 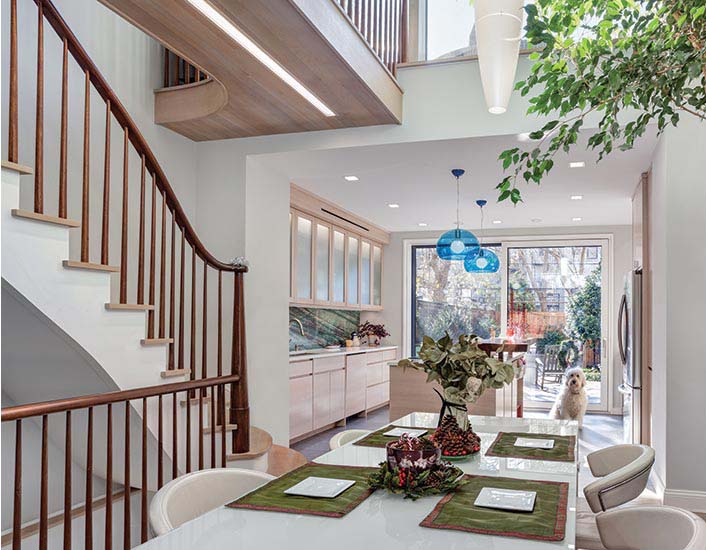 As part of a Passive House renovation to a Brooklyn brownstone, Baxt Ingui added a dormer (1), extended the rear of the house (2), and created a doublestory space over a dining area (3). Photos © Peter Peirce

The home is now Passive House-certified, meaning it conforms to a set of prescriptive strategies to minimize energy use that were first developed in Germany in the 1990s. The approach is similar to Maclay’s: to achieve the required thermal performance and reduce air infiltration, Ingui added insulation and a vapor barrier to the inside face of the masonry walls. He paid special attention to avoiding thermal bridging—when one material or element transfers heat at a greater rate than surrounding components through a building envelope, resulting in energy loss. Triple-glazed windows appear throughout: on the historic front facade they resemble traditional double-hung windows, but with a fixed upper sash and a lower one that tilts and turns. Besides the windows’ thermal properties, they more effectively block out street noise, says Ingui. The house is so well insulated that its heat pump heating system was needed only eight days this past winter, says the architect. 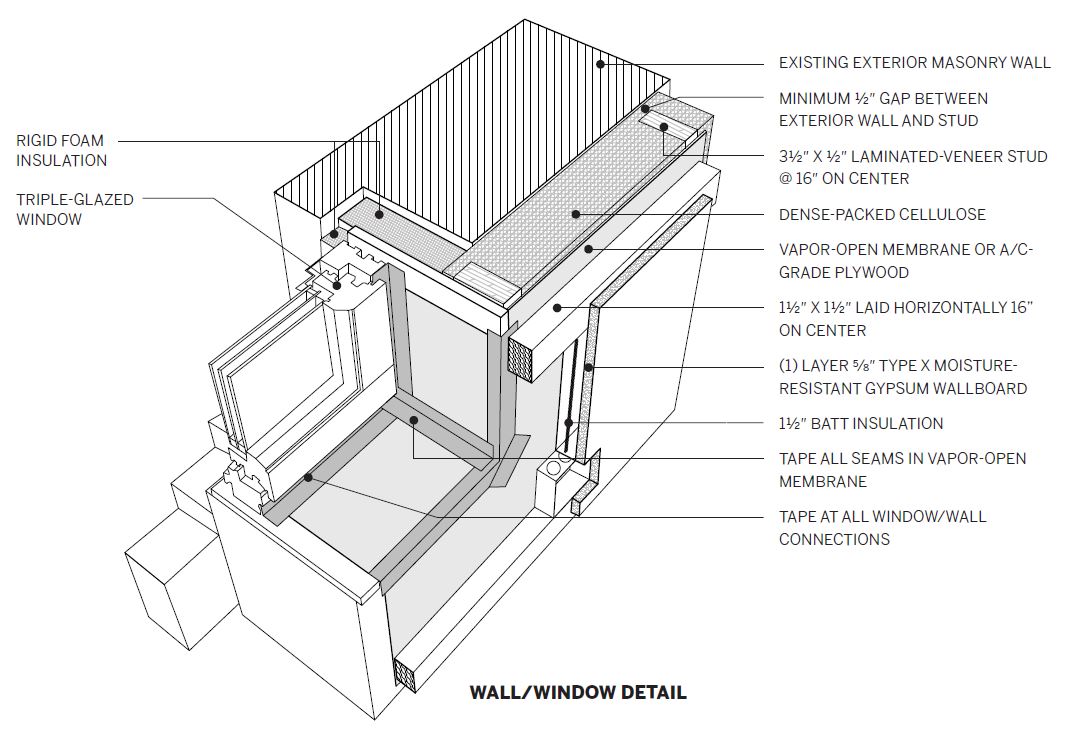 Ingui’s house will be nearly zero energy, with the addition of a solar canopy on the roof, slated for installation shortly. Ingui waited nearly four years after finishing the renovation in 2017, primarily due to budget constraints, but also to gain insight into the family’s energy use and to tweak equipment, such as the heat pump water heater (he found it had been running nearly continuously, jacking up electricity use). Despite adjustments to that system and to others, the solar canopy will fall short of demand because he has opted not to cover the entire roof but stop about 8 feet short of the street edge of the dormer. “The PVs would have been too prominent,” he says.

Besides conserving energy, net zero proponents say that buildings featuring thermally robust envelopes and mechanical ventilation systems with heat recovery are more comfortable, durable, and quiet. And they are more resilient in the face of climate crisis—a rationale that makes good sense in Seattle, where SHED Architecture & Design is based. Firm principal Prentis Hale points to the benefits of filtered air when it is undesirable to open windows due to the wildfires increasingly racing through the Pacific Northwest. 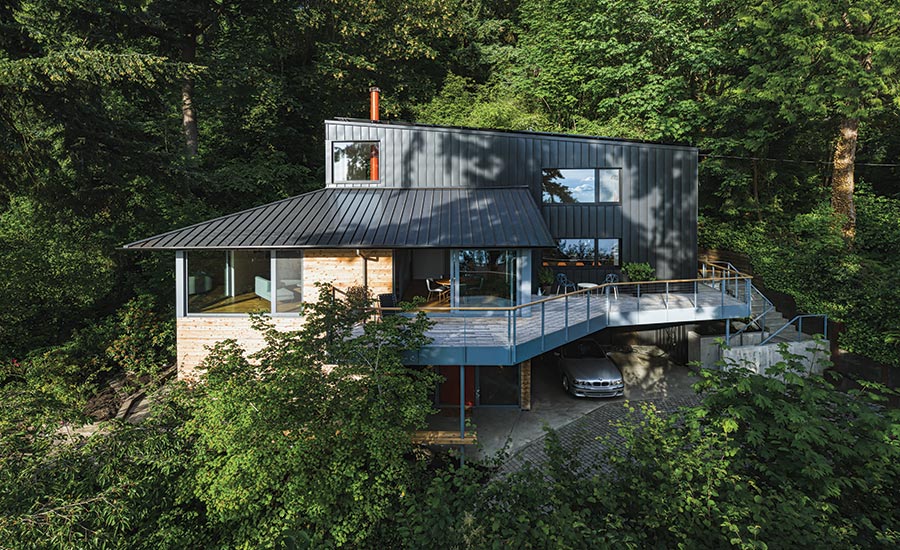 The renovation of a 1970s house in Seattle by SHED (4 & 5) distilled the exterior to two volumes—a cedar one and metal one. By improving the performance of the envelope and adding solar to the roof, among other strategies, the firm has brought zero energy within reach. Photo © Tony Kim 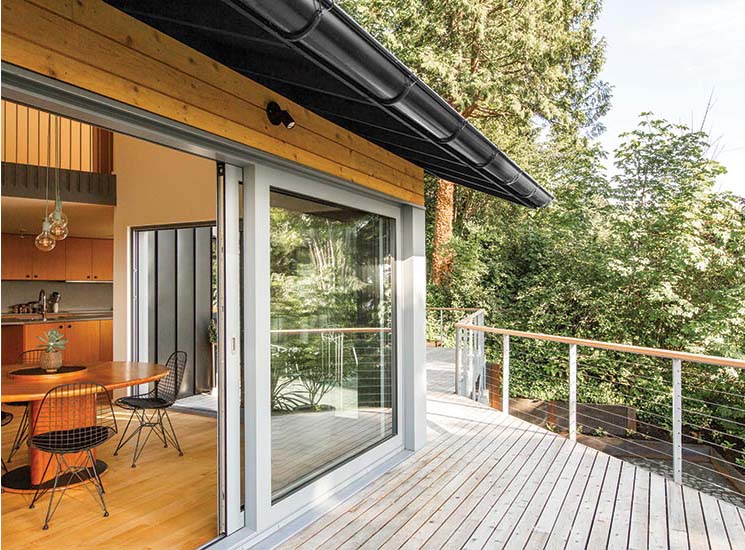 Resilience was among several selling points for the Passive House–like revamp that SHED conceived for a 2,600-square-foot house in West Seattle, on a slope overlooking Puget Sound. The firm remedied earlier, ill-conceived renovations and additions to the 1975 wood-framed platform structure by “boiling down” the previously jumbled exterior into two volumes, and handsomely cladding them in western red cedar and dark standing-seam metal. The architects clarified the fragmented interiors and opened them up to views of the water. And they put the house on target for zero energy use by incorporating such familiar strategies as heat-recovery ventilation; a tight, well-insulated envelope; and a 10.95 kW PV array on the roof. Hale hopes to certify the house as Zero Energy with the International Living Future Institute (ILFI) and is now five months into the program’s required 12-month performance-documentation period. If successful, it will be SHED’s second Zero Energy house certified by ILFI; they completed their first in 2015.

Hale estimates that in Seattle the premium for a zero energy house is 5 to 10 percent compared to standard construction. But the gap is closing quickly due to the growing stringency of the local energy code. He will be relieved when clients no longer need convincing to aim for zero. “I will be thankful when we don’t need to talk about it anymore,” he confesses. Maclay echoes the sentiment, noting that, while conservation is paramount, it is not the only priority. “We care about beauty, about space, and about connecting to nature,” he says. “We are architects.”

To earn one AIA learning unit (LU), including one hour of health, safety, and welfare (HSW) credit, read the article above and Architect’s Primer on Renewable Energy, American Institute of Architects, spring 2021, (PDF - Through page 13).

Then complete the quiz. Upon passing the test, you will receive a certificate of completion, and your credit will be automatically reported to the AIA. Additional information regarding credit-reporting and continuing-education requirements can be found at continuingeducation.bnpmedia.com.