Casa Cipriani at the Battery Maritime Building by Marvel and The Office of Thierry W. Despont

Sandwiched between a heliport and the Whitehall Staten Island Ferry Terminal at the southeastern tip of Manhattan, the 1909 Battery Maritime Building (BMB) was once the hub of an active waterfront, harboring ferries that shuttled Brooklyn commuters to and from an elevated train that fed into the building. Today it stands as a colorful reminder of a golden age of infrastructure in New York, when the city erected the Beaux-Arts-style beginnings of the subway (1904), Pennsylvania Station (1910), and Grand Central Terminal (1913). Nearly lost to the disuse and neglect many buildings suffered during the 20th-century race to modernize, this lushly decorated Beaux-Arts-expressionist structure—designed by Walker & Morris, a New York City Landmark since 1967, and listed on the National Register of Historic Places in 1976—has been rescued. Thanks to a thoughtful design strategy, the BMB maintains its provenance with updated ferry ports at grade and looks toward the future on its upper levels with the new Casa Cipriani, which aims to rouse its old bones with activity 24/7. 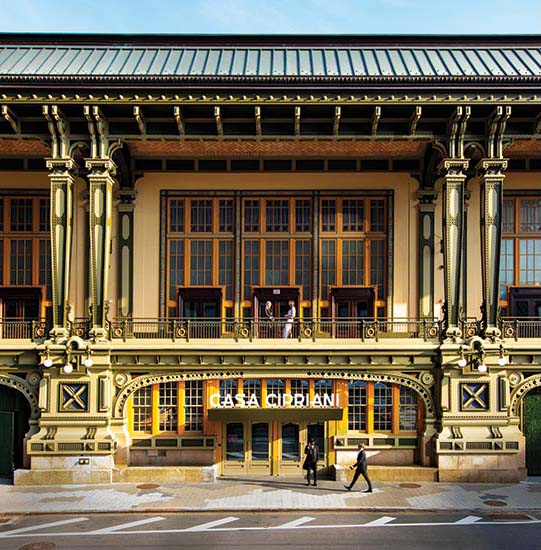 A port cochere runs behind the main entrance, which sits beneath statuesque columns. Photo © David Sundberg/Esto, click to enlarge.

Set to open this summer, Casa Cipriani will house a cluster of programs on five floors: an event space, a wellness center, a small hotel, and a private club with a lounge, jazz café, bars, and varied dining options. The BMB’s resuscitation was realized through a public/private partnership committed to a meticulous restoration and renovation, supported by viable programming. The New York Economic Development Corporation (EDC) collaborated with developers Midtown Equities (a company that has been instrumental in similar renewal projects) and Centaur Properties, as well as Cipriani, the 90-year-old hotelier and restaurateur, with previous experience in historic properties. New York architecture firm Marvel was hired to develop a scheme in tandem with interiors designed by Thierry Despont. 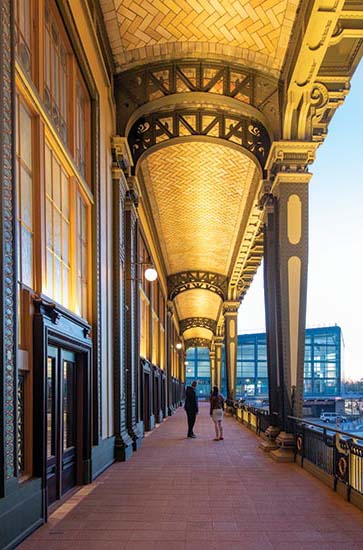 Built on wood piles capped by concrete, the existing 198-foot-deep steel-and-slab building appears to be two: on the north, a 263-foot-wide, two-story structure, facing the street with a double-height vaulted loggia above five bays for pedestrian and vehicle access; and, on the harbor side, a 316-foot-wide, four-story structure dominated by three broad bays that today house docks for public ferries to Governor’s Island and New Jersey. While there had been attempts to reimagine this city-owned property in the 1980s and ’90s (including an unrealized Diller Scofidio + Renfro plan for a hybrid arts and commercial space), it had remained largely ignored since the 1930s, serving as municipal offices and storage, a homeless shelter, and as Army and Coast Guard slips for launches servicing former bases on Governor’s Island. The existing skin—an assemblage of stamped zinc and copper, rolled steel, and cast iron painted in shades of green and yellow with blue tile insets—had faded, and many of its architectural details were lost. At the turn of the 21st century, a new waterfront-improvement effort prompted the EDC to hire historic-preservation architect Jan Hird Pokorny Associates to stabilize, repair, restore, and recreate (where necessary) the 145,000-square-foot landmark’s ornate facades and roof. When this exterior work was completed, the EDC sought an investor to bring an economic engine to the property. 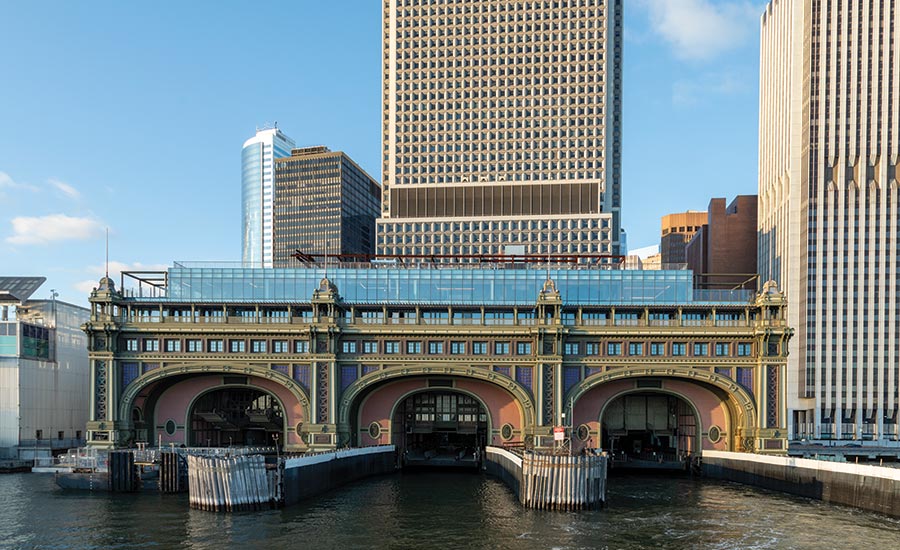 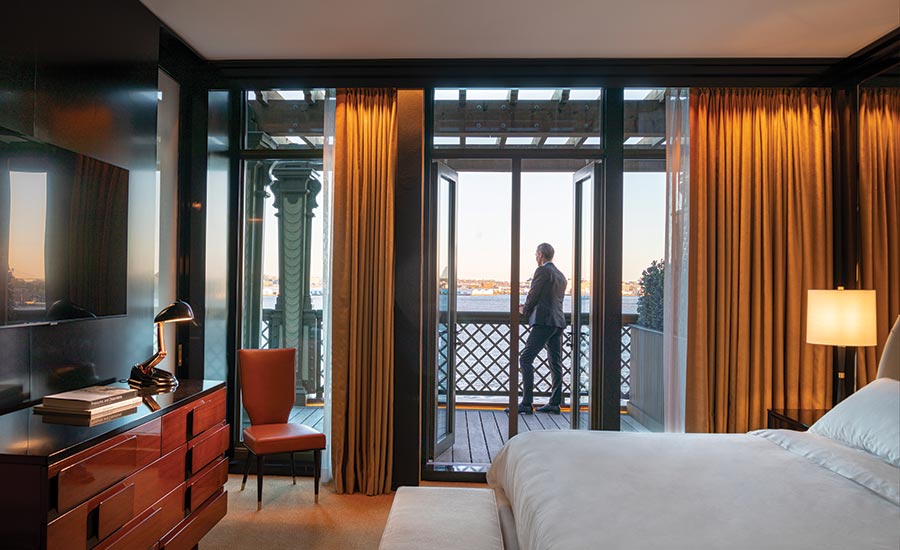 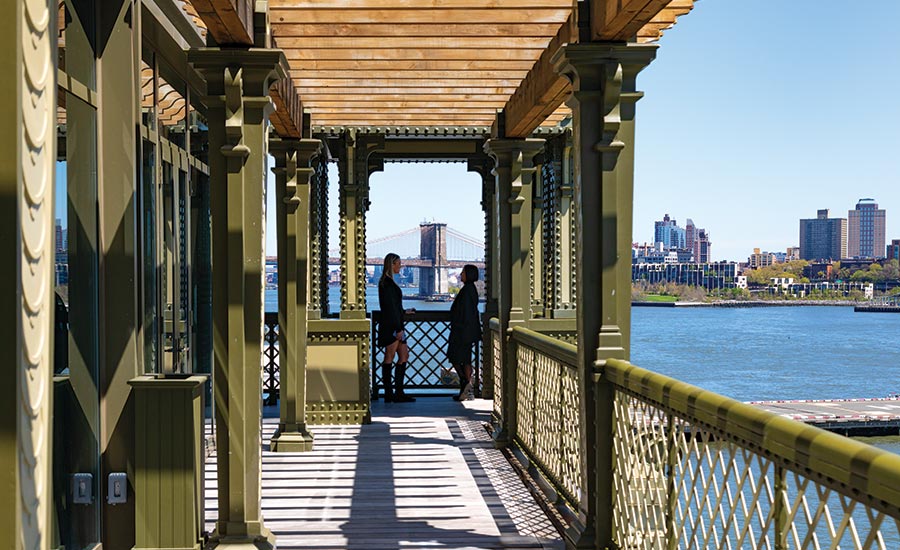 Fiberglass replicas of lost cupolas perch outside the glazed addition (1), which reflects the sky. One floor below, elegant hotel rooms (2) open to pergola-covered terraces (3) with views of Brooklyn and its famous bridge. Photos © David Sundberg/Esto

When Marvel first arrived, “the interior was still completely gutted,” says firm director Tim Fryatt. Moreover, he adds, the actual floor area of the building was insufficient for the numerous back- and front-of-house spaces such a facility would need. Working with the structural engineer Silman, the architects ascertained that the building would support a fifth-floor addition. Then they negotiated with the appropriate city, state, and federal agencies for landmark approvals—and to secure tax credits. According to Fryatt, they made the case that the original building had an open-air rooftop pavilion with a pergola and cupolas along its cornice, which had been replaced in the 1950s by a utilitarian shed for the offices. The concept, he says, was to rebuild the cupolas and pergola, substituting the shed with a more historically sympathetic fourth-floor addition, and to create a fifth floor with a glass curtain wall to reflect the sky, putting the cupolas in relief. 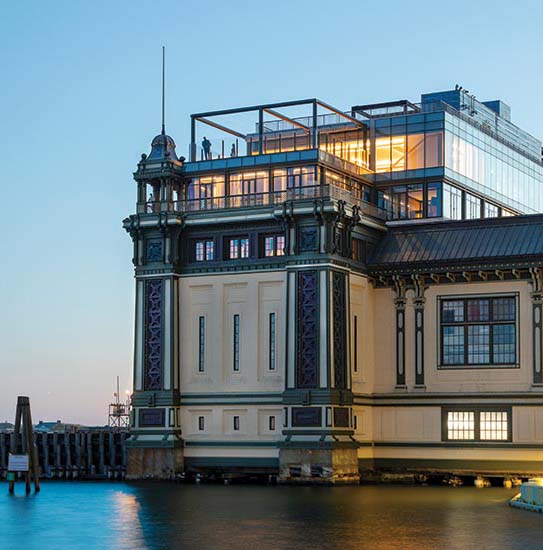 With permissions in place, the design team brought the interior up to date with improved egress, acoustic isolation, mechanical systems, and safety codes, maintaining as much of the original detail as possible. Radiant floor heating warms expanses of slab above the exterior bays, while an enhanced sprinkler system eliminates the need to conceal the embellished structural steel with foam or treat it with intumescent paint. The architects also devised a ceremonial steel stair from drawings of an original one removed years ago. This gracious entry sequence now leads visitors from one of two new lobbies up to a second level concourse, where freshly painted trusses march across a double-height ceiling, and the 9,000-square-foot Great Hall event space, which once served waiting ferry passengers, showcases a 130-foot-long by 16-foot-wide daylight, recreated from an old photo, that stretches beneath an existing gabled skylight. 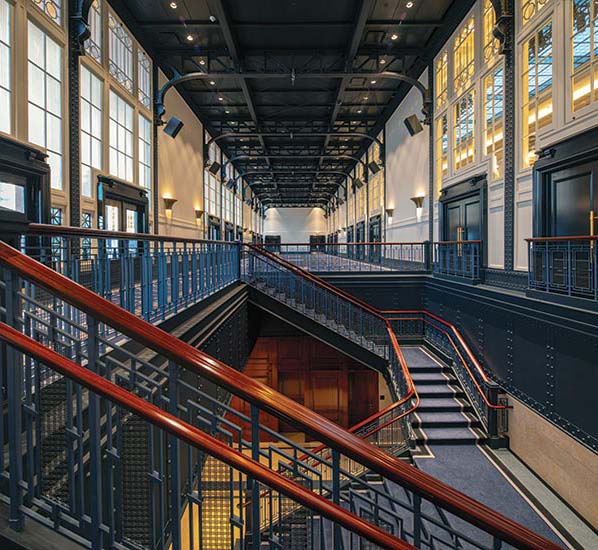 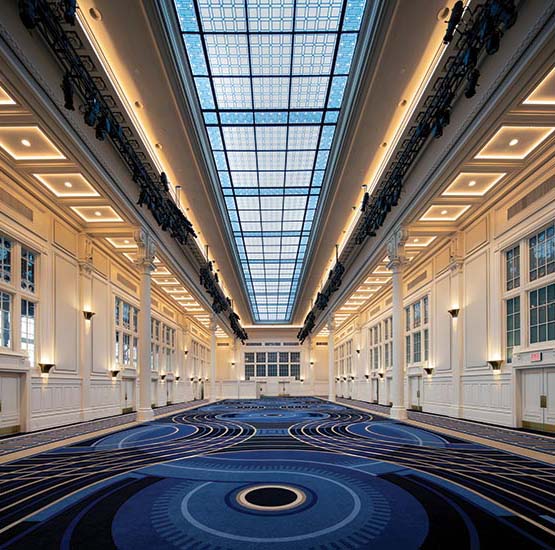 Original drawings informed the recreation of a historic stair in the concourse (4) and the laylight in the Great Hall (5). Photos copy; David Sundberg/Esto

At the same time, the architects worked with Despont to establish a logical progression of spaces for the remaining Cipriani venues, adding more than 17,000 square feet to accommodate them—in part by inserting a mezzanine around the top half of the Great Hall volume to house the wellness center. The design team created an intimate 47-room hotel within the existing third and new fourth floors, reinstating the lost pergolas on terraces that wrap the upper guest rooms and suites. The linearity and handsome finishes of these levels—white oak in the spa and lacquered mahogany throughout the hotel—lend the aura of an elegant Art Deco ocean liner. The glossy mahogany reappears in the glazed fifth-floor club addition, on the walls and ceiling, reflecting the watery environs captured by the glass.

The effect can be hypnotic. On a recent sunny-afternoon visit—while the club level was still bustling with subcontractors—the promise of the commodious lounge and promenade, the Deco-inspired jazz club, and the east and west terraces, with views of the Brooklyn Bridge and Statue of Liberty, suggested the arrival of a singular New York experience. 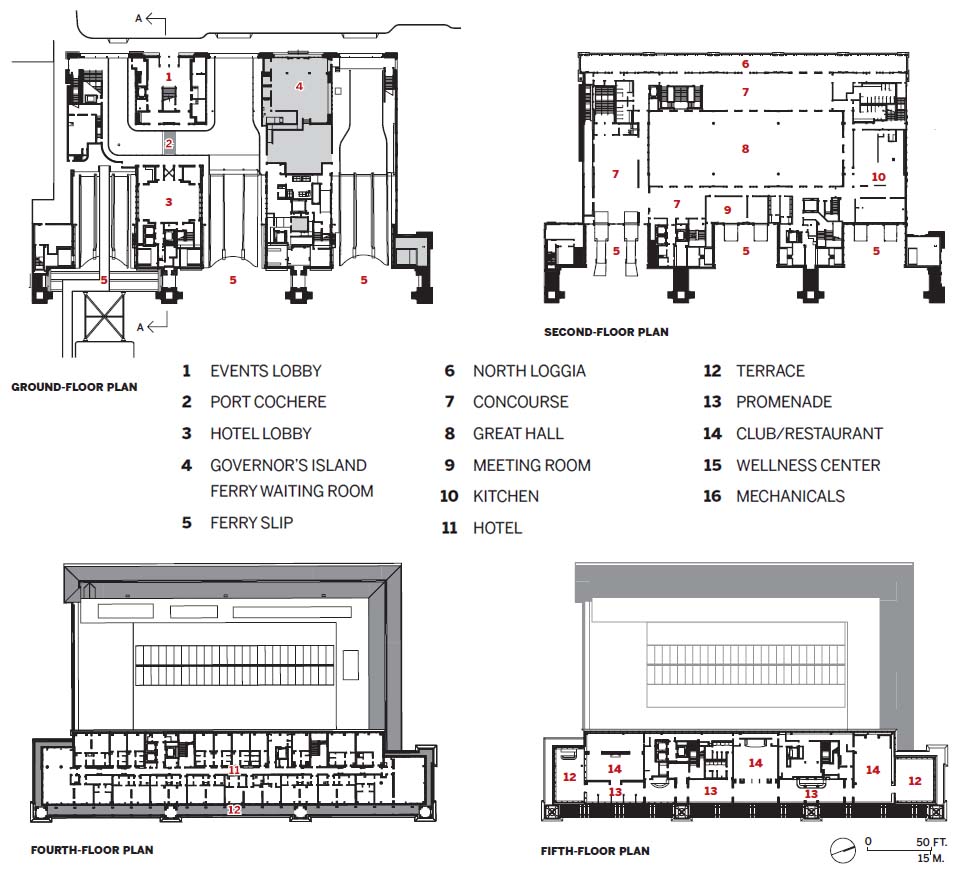 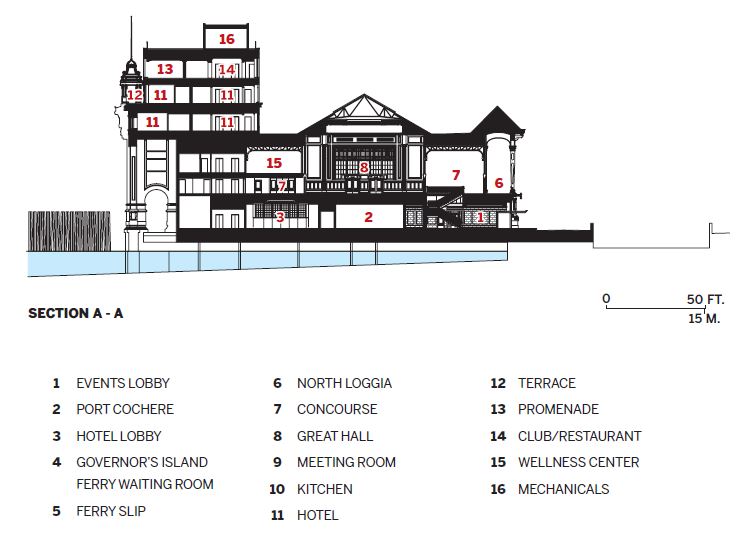