The best public housing is conceived, and planned, from the inside out. The design of such apartment buildings should be driven by a deep knowledge of the inhabitants’ specific needs as well as a desire to create a sense of place. This housing does not exist in a vacuum as an iconic structure but, rather, must aim to integrate itself into the existing urban fabric. And, not least, these projects almost always need to heed a tight budget. This is why there are so few examples of extraordinary public housing. Many architects and builders have tried, yet very few have been able to finesse the acrobatics required by all these constraints.

Overcoming the odds, Barcelona-based Peris+Toral Arquitectes has just completed an extraordinary public-housing complex in the municipality of Cornellà, in the Catalonian capital’s outskirts. Holding the distinction of being the largest timber residential building in Spain—a trend rapidly gaining traction here—the social dwellings thoughtfully consider the needs of residents while helping connect them to the neighborhood. 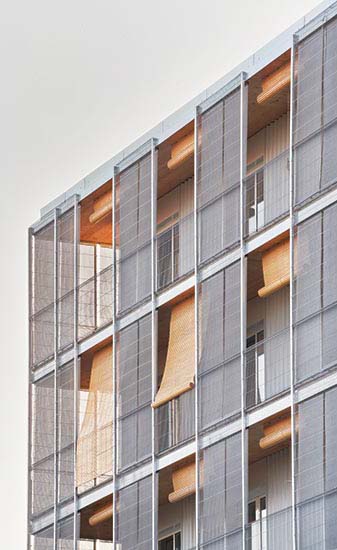 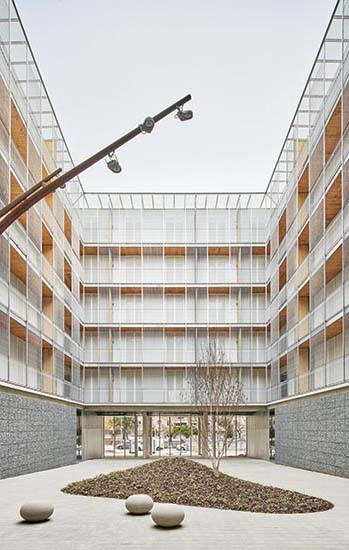 All apartments have dual exposures; most look both outward (1) and inward to the courtyard (2). Photos © José Hevia, click to enlarge.

These aims are clear from the moment you enter the five-story building: you pass through a common courtyard that is both public and private—it remains open during the day, acting like an extension of the street, though a calmer and cleaner version. This liminal space isolates the apartments acoustically and physically from the city’s noise and heat, providing open space and enabling cross ventilation through the building (all units have dual orientation). At the same time, the building reinforces the connection to place by paying tribute to the memory of the beloved old Copisa movie theater that previously occupied the site. (Space has been reserved in the basement to, one day, open a small, public movie theater.) Both physically and sentimentally, the project achieves its aim of respectfully inserting itself into the town’s fabric. 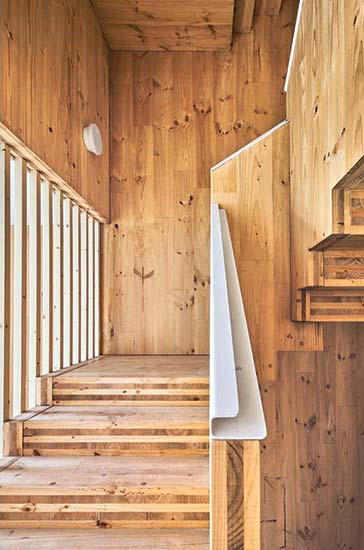 An elevator and wood staircase anchor each corner of the courtyard. These provide direct access to inward-facing exterior corridors and the 85 apartments that occupy the building’s four volumes, which sit atop ground-level retail and basement parking below that. Built out of reinforced concrete, these two lower levels act as the building’s structural base. On top, the team used a lighter wood structure for the apartments. “Working with wood, we reduce the construction time and make the whole process more sustainable,” says partner José Toral, noting the material’s superior acoustic insulation. Wood is also visible in the finishes—on the floors and ceilings, for example—and plays an invisible role by absorbing humidity, odors, and noise as well as helping to keep a stable ambient temperature in the interiors.

Just as the central courtyard is the heart of the building, inside the units—configurations consist of either five or six interconnected rooms forming two- or three-bedroom apartments—the kitchen plays a similar role, forming the center of the domestic realm. And just as there are no public interior corridors connecting the individual units, there are no corridors inside the apartments to connect the rooms; eliminating circulation maximizes the usable space for each tenant. The rooms are all similar in size—about 140 square feet—which implies that there is no hierarchy among them. This is a truly democratic layout—and it is flexible as well, allowing residents to slide open doors to connect rooms and create one larger one, or to slide doors closed, to isolate spaces and afford privacy. (One apartment in each of the building’s four volumes has an additional access door leading from the balcony, which can be used for an independent studio space or business.) Toral and his partner Marta Peris maintain that increasing porosity is a logical approach for urban apartments. “Eliminating enclosed spaces and interconnecting rooms allows for changes in circulation patterns and therefore encourages the use of space in a freer way,” says Toral. 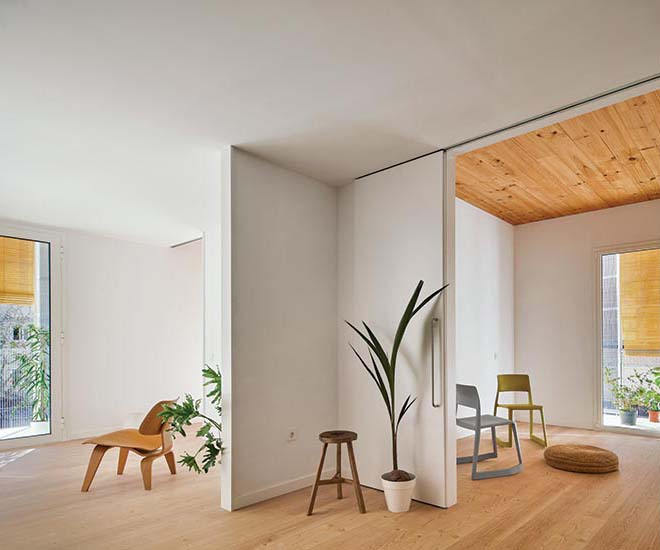 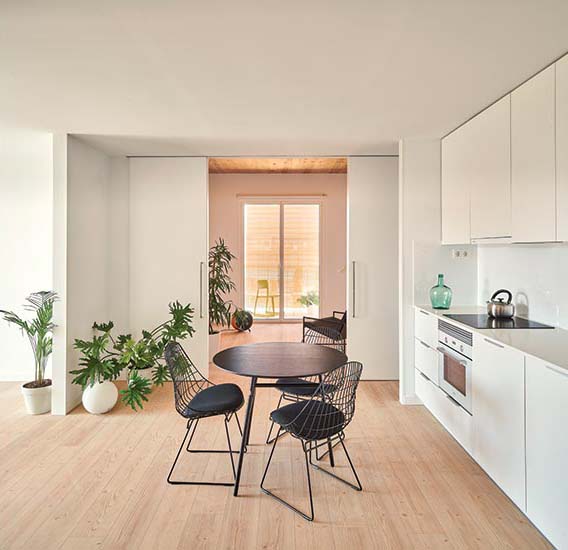 Units have no corridors; rooms can open to or close off from one another with sliding doors (3 & 4). Photos © José Hevia

A continuous narrow balcony on the apartments’ outward-facing sides, in addition to the inward-facing exterior corridors, provide added circulation while flooding the interiors with daylight. These in-between spaces expand each unit’s functional square footage, allowing residents to see and be seen, sunbathe, dine al fresco, or dry laundry. (In Spain, to qualify for social housing, applicants must first meet the criteria for income level and then participate in a lottery system.) Steel balustrades, steel mesh, and wood roll-down Barcelona blinds shroud the outward-facing terraces, enabling seclusion and air-flow while unifying the structure and providing a sense of urban scale. 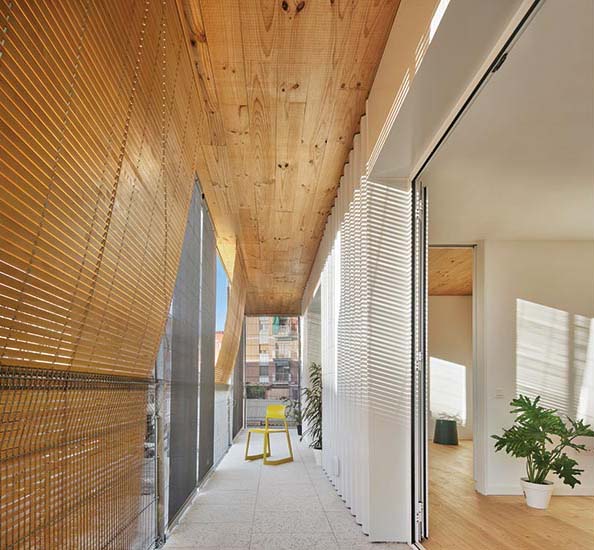 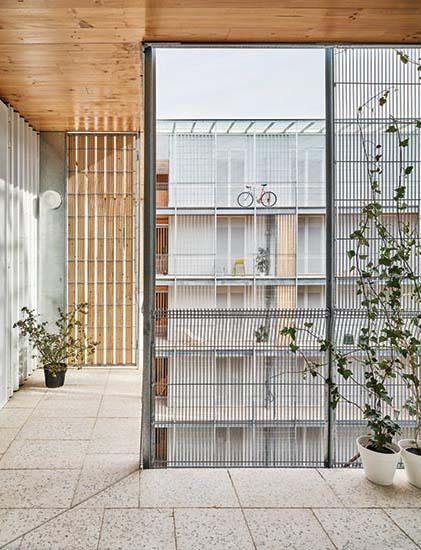 “We tried to make homes that are flexible—ones that admit the good things the outside has to offer: air, light, vegetation, or history,” says Peris. With a strong sense of openness and connection—both inside the individual apartments and reaching out to the neighborhood—as well as privacy, the social dwellings in Cornellà achieve a rare balance of bringing dignity both to the residents within and the city beyond. 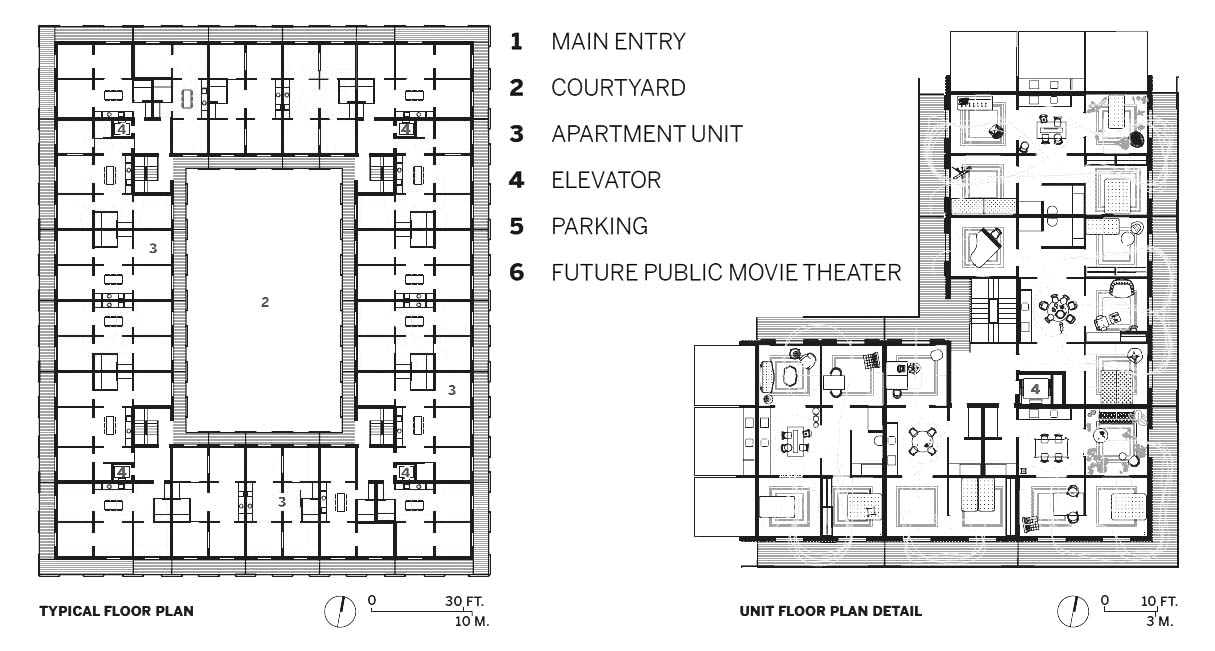 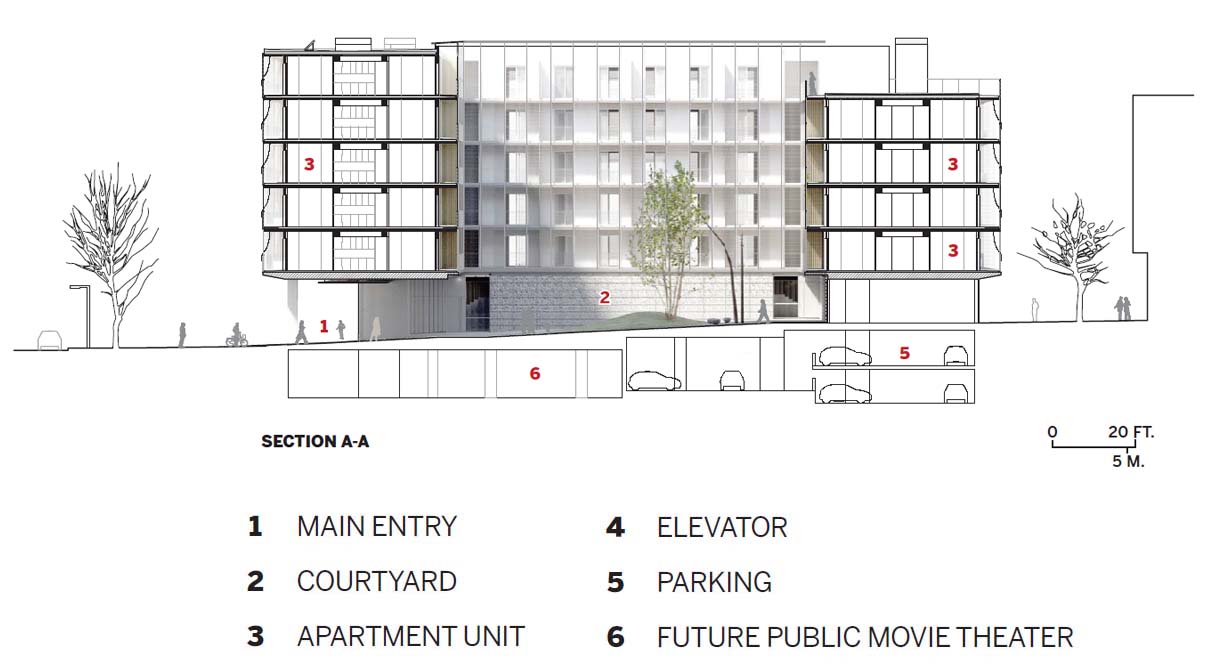 Madrid-based Anatxu Zabalbeascoa is the architecture critic of the Spanish daily El País.