Concepció Hotel by Nobis by Wingårdhs

When Wingårdhs lead architect Helena Toresson first visited the centuries-old building in Palma de Mallorca that was to become the latest Nobis hotel designed by the Swedish firm, the long-abandoned structure “seemed to house all the pigeons on the island,” she jokes. Just a month later, several slabs caved, leaving gaps in the roof and elsewhere. “Still,” she says, “there were bits and pieces that were really beautiful and had potential.”

Top on that list was the incredible vaulted ceiling, constructed of local sandstone, in the ground-floor space, which was carefully cleaned and restored. Part of the four-story, 25,000- square-foot edifice dates back to 1576, with later additions into the 19th century. At one point a soap factory, the building had more recently contained retail and restaurants at street level, with apartments upstairs.

Not as obvious an inspiration were the remnants of badly damaged floor tiles, with a dated flower-and-leaf decoration, which would lead to the biggest design move. Learning that the tiles were probably made in Campos, just east of Palma, the Wingårdhs team visited the factory there. They embraced the opportunity to work with local craftsmen, and designed striking graphic floors as a distinct counterpoint to the historic element overhead. The new pavement—composed of handmade cement tiles, each just over 3 feet wide, covering the ground level’s common spaces and outdoor areas—features a pattern made from 36 unique squares that was modeled after an anonymous watercolor the architects found online, and uses the green hue of the uncovered scraps. 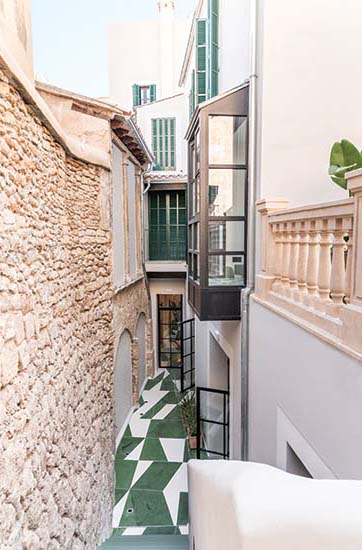 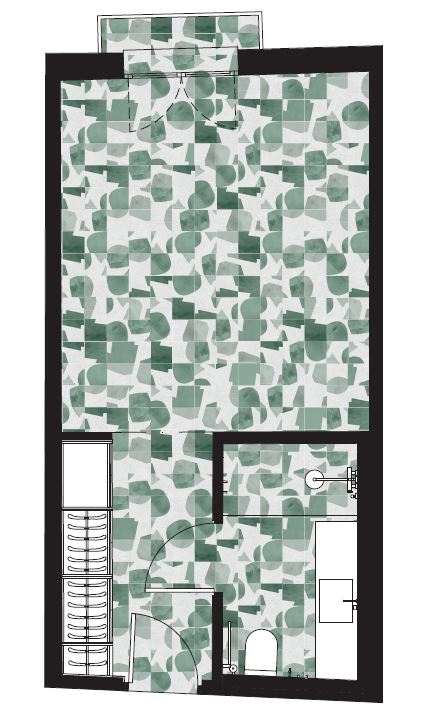 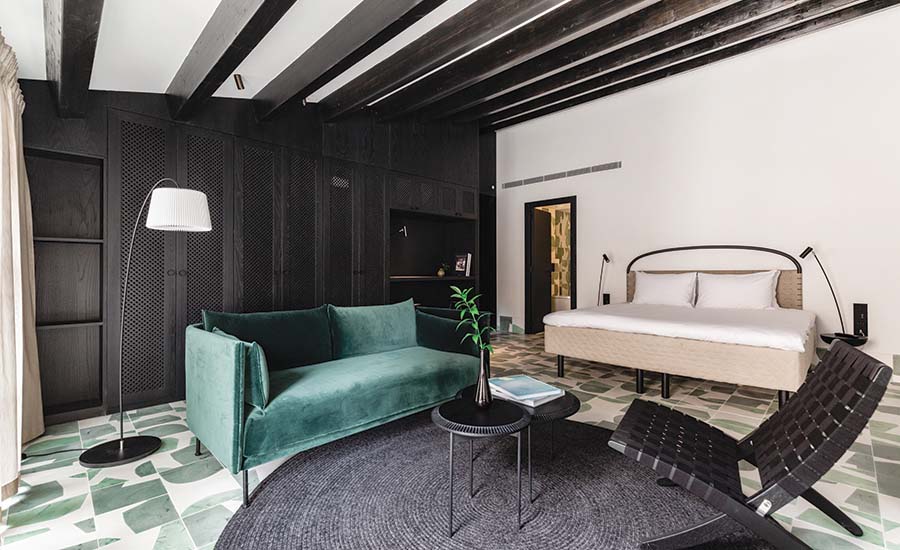 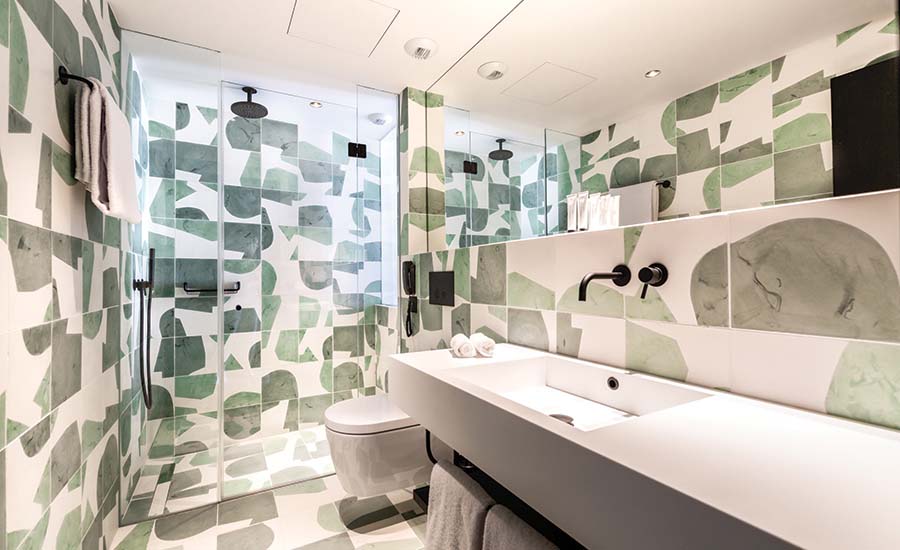 The new tiles spill out to a courtyard (1), and are arrayed in a different pattern (2) with smaller squares in the rooms (3 & 4). Photos © Pernilla Danielsson, click to enlarge.

The walls throughout the ground level’s reception area, lounge, restaurant, spa, and meeting rooms were plastered and painted a stark white, providing a neutral backdrop for the design touches in those spaces, which would already be competing with the strong architectural elements above and beneath them. 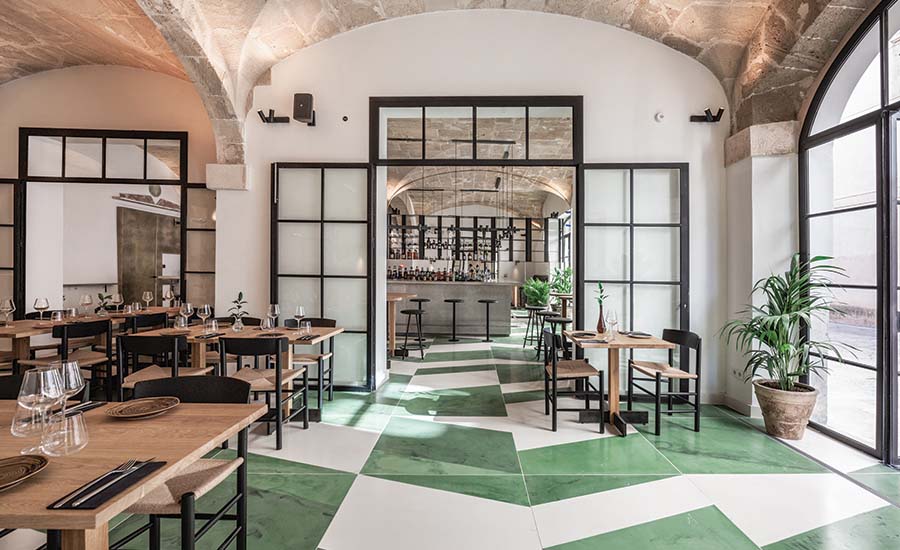 Common areas include a restaurant (5 & 6) and lounge (top), with an eclectic mix of furniture and plants. Photo © Pernilla Danielsson 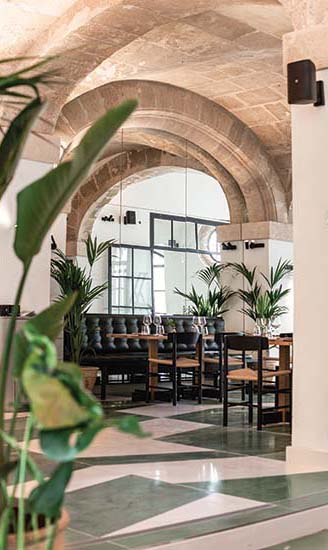 Much as they had done in earlier projects for the Nobis hotel chain—which include the conversions of a 1903 Neoclassical structure in Copenhagen originally built for an insurance company and a Philips warehouse designed by Sigurd Lewerentz in Stockholm—the architects aspired to create a warm, welcoming atmosphere. They chose furnishings and finishes for their authenticity and longevity. In the common areas, a blend of fixed and loose seating represents classic pieces, vintage finds, and flea market bargains, as well as Wingårdhs-designed elements. 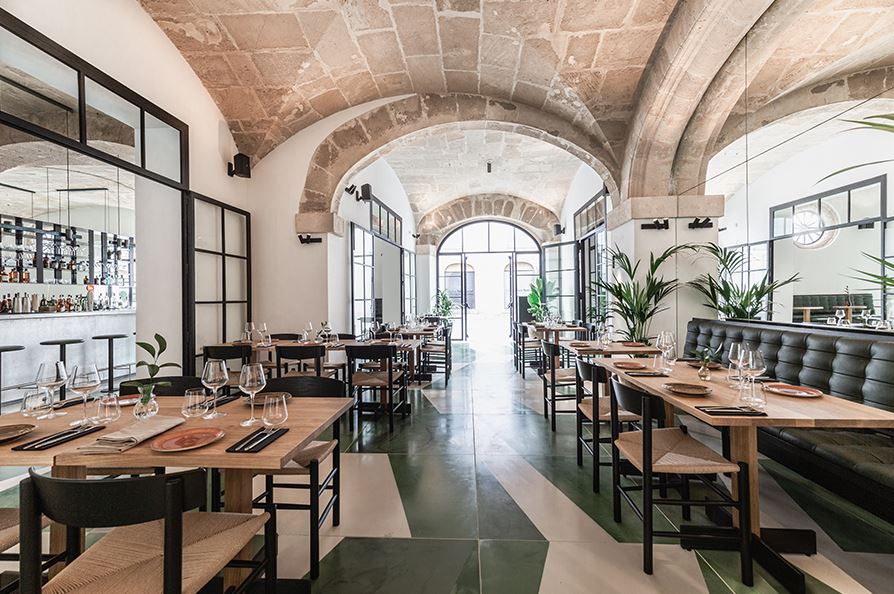 The restaurant faces onto the street. Photo © Pernilla Danielsson

The architects used metals in a variety of ways. The bar in the restaurant, which faces out to the street, features a silvery hammered zinc, while the brass reception desk glistens in a polished gold tone. A decorative metal railing in the main stone staircase at the hotel entrance was retained, but refreshed and heightened to meet current code. Openings beneath the cross vaults are marked by glass and black-painted wood apertures. Linen draperies add softness, while leafy plants throughout—which Toresson picked up around town in June, just before the hotel’s opening—enhance the island vibe. 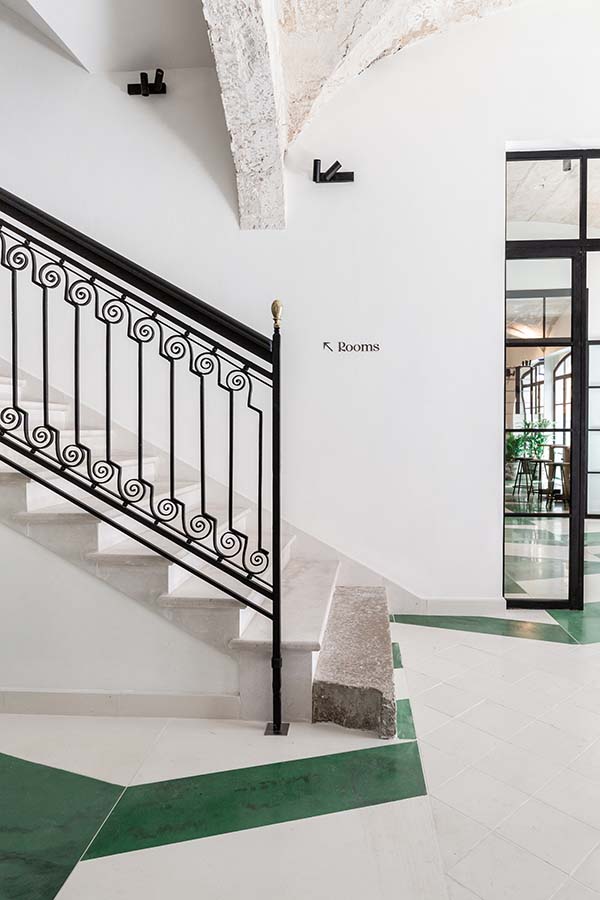 The existing decorative metal railing in the main staircase was lengthened to meet current code. 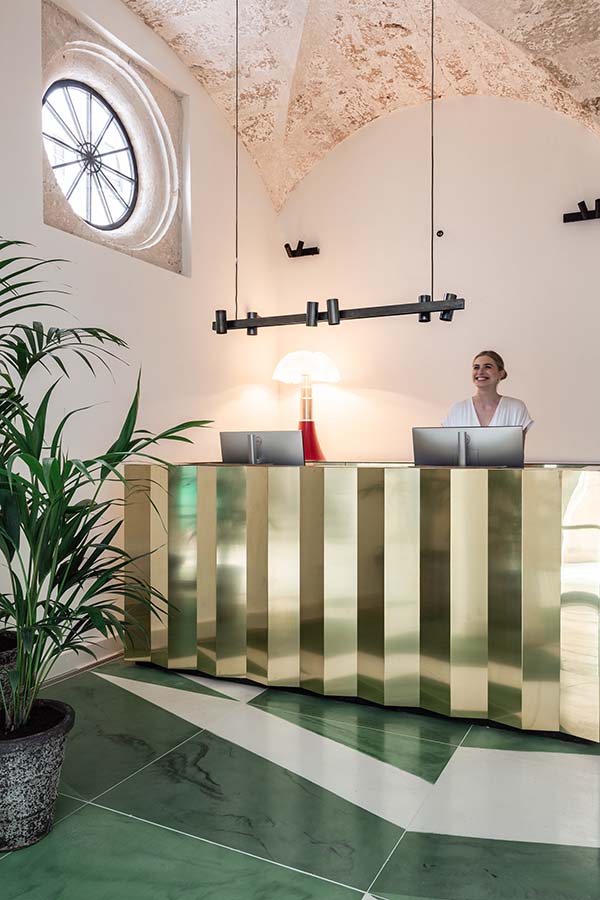 The reception desk is made of polished brass. 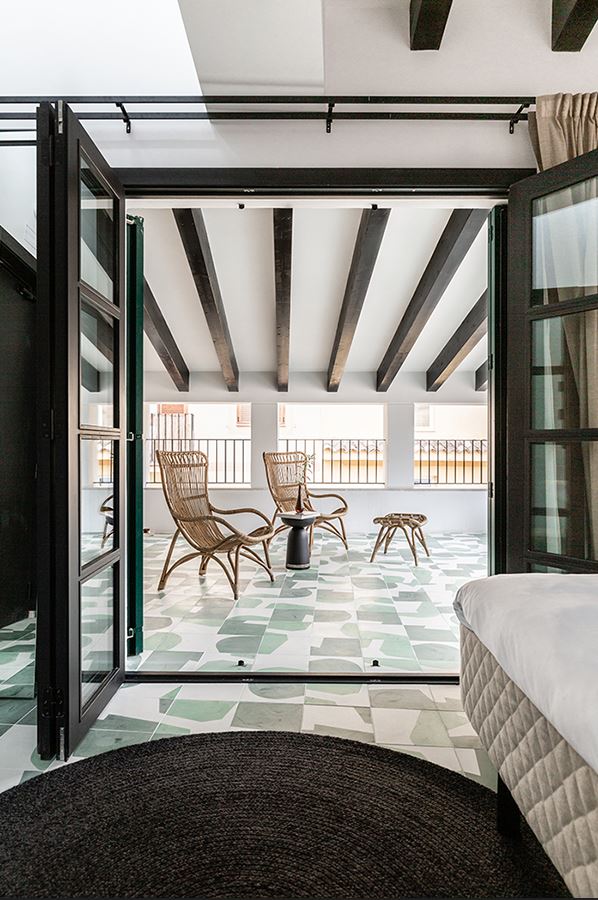 Each of the 31 guest rooms on the upper floors, all accessible by newly installed elevators, has a unique layout. There, dark wood ceiling beams, also polished and restored, are matched by black-stained ash built-ins. An equally eclectic mix of furniture, upholstered in velvets and other robust fabrics, greets overnight guests. The rooms’ floor tiles are similar to those on the ground level but have a smaller dimension and feature a different pattern—rounded in this case to contrast with the linear beams above. In the bathrooms, the tiles spread out over the walls and into the showers.

Terraces on the second floor overlook a small pool, whose somewhat triangular shape, as well as its position, shifted as archaeological findings just at the start of construction prohibited the design team from digging the hole where they had originally intended. But Toresson takes it in stride. “It’s always exciting to build in old structures,” she remarks. “Nothing is fixed. Now the pool is a hidden gem.” 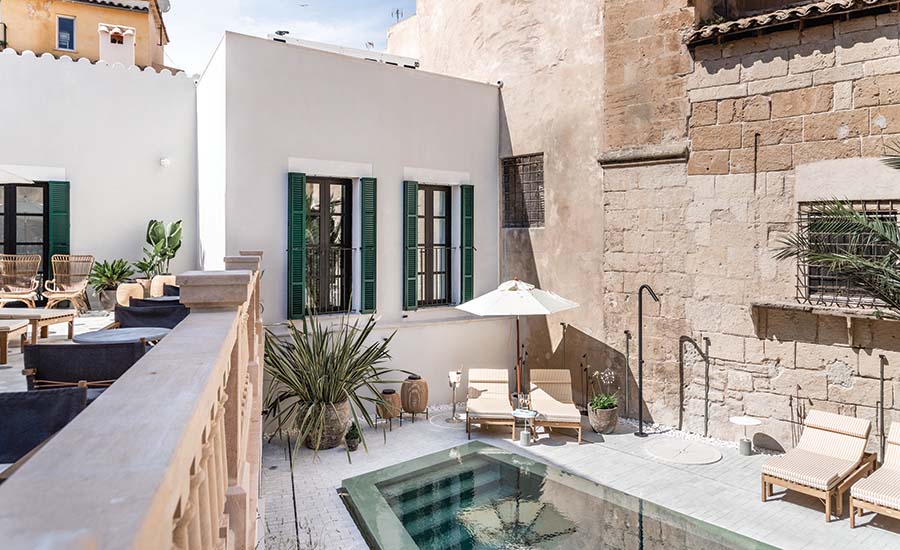 Tucked away at the rear of the hotel is a small pool whose splayed shape and specific location were determined in order to avoid archaeological remains found in the building. Photo © Pernilla Danielsson

Concepció is the first hotel for Nobis that Wingårdhs has completed outside of Scandinavia, but it won’t be the last. The architects are currently working on updating an even older building on Mallorca—from the 12th century—as luxury accommodation. The team has become expert in transforming neglected buildings with rich architectural legacies for the boutique hospitality group. While the firm approaches each project with respect for the old, it has also been fearless, making bold interventions so that there is no mistaking the new. With Concepció, its location in the Mediterranean brought a fresh context and palette but a similar daring spirit. Says Toresson, “Everything is different, but still the same.” 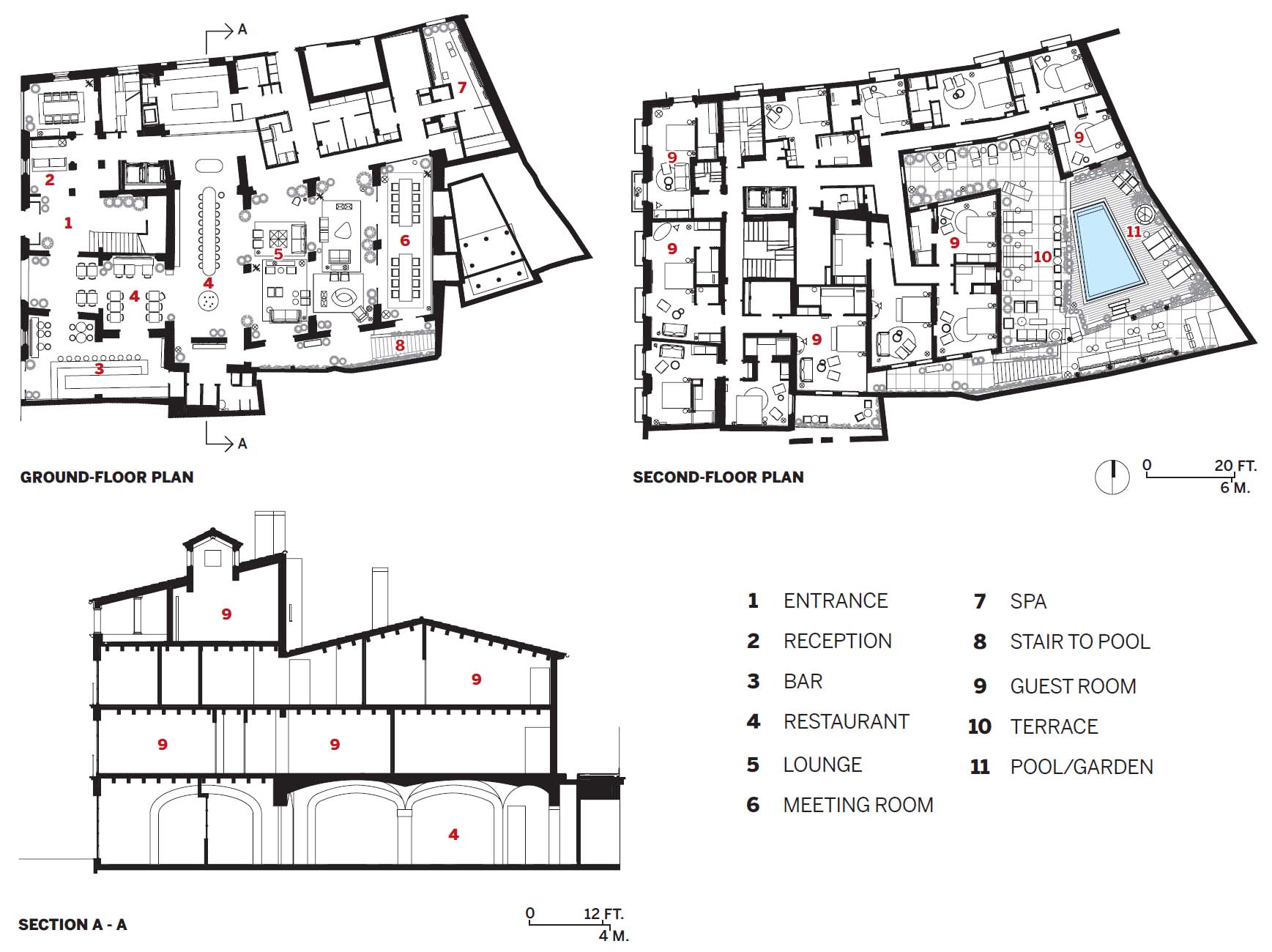