This website requires certain cookies to work and uses other cookies to help you have the best experience. By visiting this website, certain cookies have already been set, which you may delete and block. By closing this message or continuing to use our site, you agree to the use of cookies. Visit our updated privacy and cookie policy to learn more.
Home » Le Monde Media Plaza by Snøhetta and SRA Architects with BOA Light Studio
ProjectsLighting Design

“We thought of the vault as a skin,” says Jean-Marie Priol of Paris/New York–based lighting-design studio BOA, when describing their project for the headquarters of the Le Monde newspaper group. “A skin that translates emotion. You might blush, be cold, be afraid, get goose bumps . . .” Designed by the Norwegian firm Snøhetta and completed in 2020, the building sits on a concrete platform over railroad tracks next to the Paris-Austerlitz station, so is engineered as a bridge. Snøhetta chose to express this in the form of a giant arch, whose vast irregular vault soars above a public “media plaza” that accesses the building and will one day link with a planned pedestrian walkway behind the terminus. In their competition renderings, Snøhetta showed the vault studded with lights, and later sought BOA’s technical expertise to realize their vision.

“We’re usually approached at the beginning of the design process,” explains Priol, “but here we arrived after construction had begun and were given just three months to find a solution to a specific technical problem. We used that opportunity to augment the concept and make it more narrative and contextual.” On the technical side, it was a question of sourcing LED lamping that could be unscrewed like classic lightbulbs—the stone-colored concrete panels that clad the vault cannot be removed for maintenance—and offer the chromatic range that BOA was seeking. Time and budget precluded a custom solution, but Canadian manufacturer Lumenpulse had developed just the right product. On the conceptual side, BOA set themselves a threefold challenge: obtaining a satisfactory result from a reduced number of LEDs (1,312 for a surface area of close to 23,700 square feet, a figure arrived at through cost negotiations); wowing first-time visitors; and ensuring that regular users would not tire of the spectacle. 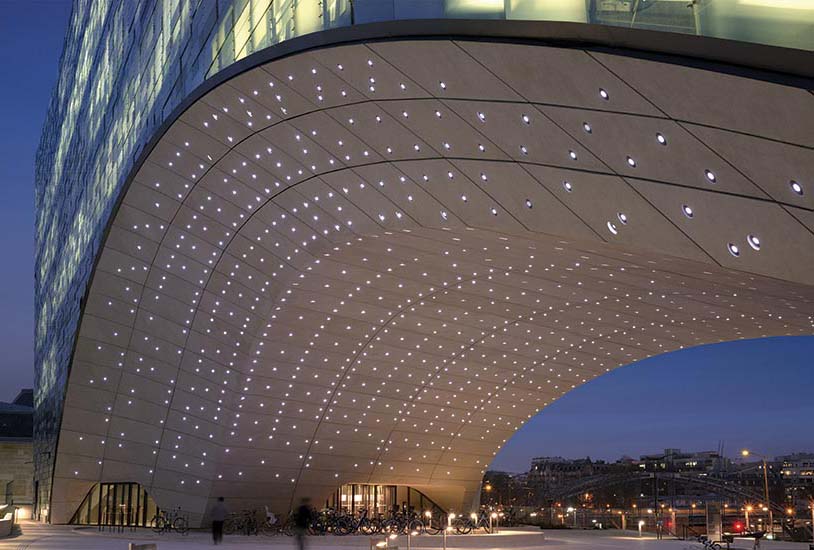 No lights were placed lower than 8 feet, to avoid vandalism; moreover, no holes were drilled within 2 inches of the edge of each concrete panel, to avoid breakage. (All of the panels are unique). The fixtures are thus concentrated in the higher parts of the vault, on its underside and flared lateral surfaces, and lined up in rows like the portholes of a ship. Their distribution is not regular, however, BOA having randomized their pointillist pattern in PhotoShop.

“What you see under the vault today are skies,” continues Priol, “videoed in different places around the world [a reference to the paper’s title] and reworked in our studio to produce a short light sequence of four to five minutes.” Passing from warm yellow-whites to violet to cold blue-whites, the low-definition effect may not exactly evoke the blue yonder, but avoids overwhelming the architecture and brings a welcome dose of Hollywood-starship glamour to an otherwise yawning cavern.

The current light sequence is stored on a memory card (a second memory card carries a special-events configuration in Le Monde blue), but Priol hopes that one day the lighting can be connected to a data feed that would allow it to reflect activity inside the mothership—the blushing skin translating heart rate. “It shouldn’t be anything too complicated,” he explains. “Data such as the number of tweets made by Le Monde journalists or the real-time rate of articles published on the web.” His one regret is that BOA did not design the plaza-level lighting, which he feels is a little too bright; no doubt an integrated solution, where the functional and decorative combine as one, would have been preferable. That said, the entertainment value remains intact, an evocative galactic twinkling for the telecom-satellite age. 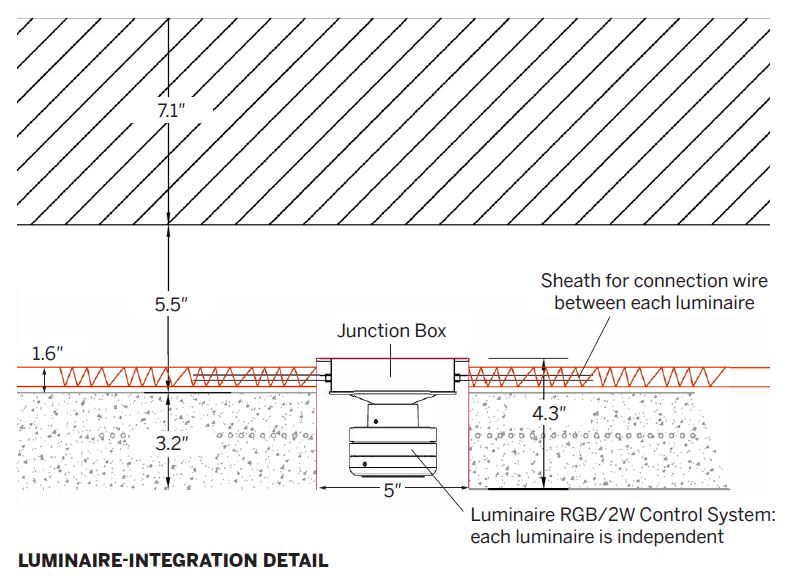