This website requires certain cookies to work and uses other cookies to help you have the best experience. By visiting this website, certain cookies have already been set, which you may delete and block. By closing this message or continuing to use our site, you agree to the use of cookies. Visit our updated privacy and cookie policy to learn more.
Home » Argo Factory: Contemporary Art Museum & Cultural Centre by Ahmadreza Schricker Architecture - North
ProjectsBuildings by TypeMuseums + Art CentersReuse and Renovation

Enriched with historic houses and old buildings turned into vibrant coffee shops and new galleries, revitalized parts of Tehran are responding to an emerging generation of artists and art seekers looking for spaces to gather, socialize, and create. Argo Factory: Contemporary Art Museum & Cultural Centre is one such venue, a nearly 100-year-old abandoned factory that has found a new life after art patron Hamidreza Pejman bought and transformed the building into a museum and gallery space for contemporary art. The project was led by Ahmadreza Schricker Architecture – North (ASA North), a New York–based practice with a satellite office in Tehran. Argo Factory has become a notable destination within the complex urban fabric of the megacity inhabited by 14 million people.

Once a brewery, Argo Factory was built in the District Twelve neighborhood, known as the “heart of Tehran,” with some of the most treasured old buildings in the city. Argo (the name of the beer once made there) is a few blocks from the legendary Ferdowsi Square to the north and Lalehzar Street, the birthplace of contemporary Iranian theater, to the east. During the early to mid-20th century, Iranian artists, writers, and intellectuals frequented the famous Naderi Café nearby.

Following the 1978 Islamic revolution, most of the area’s major theaters and entertainment venues closed, except for the old palaces and museums, as the neighborhood changed from an upper-class district to a commercial and tourist center. But, decades later, the movement to regenerate Tehran’s historic fabric took hold, and the old buildings began to be converted to cafés and galleries. Pejman, looking for a place for his art foundation, found Argo Factory, with its brick architecture, high ceilings, and 77-foot-tall chimney. “It had what I felt was lacking in Iranian galleries,” he says, because large-sized artwork could be displayed within its expansive space. 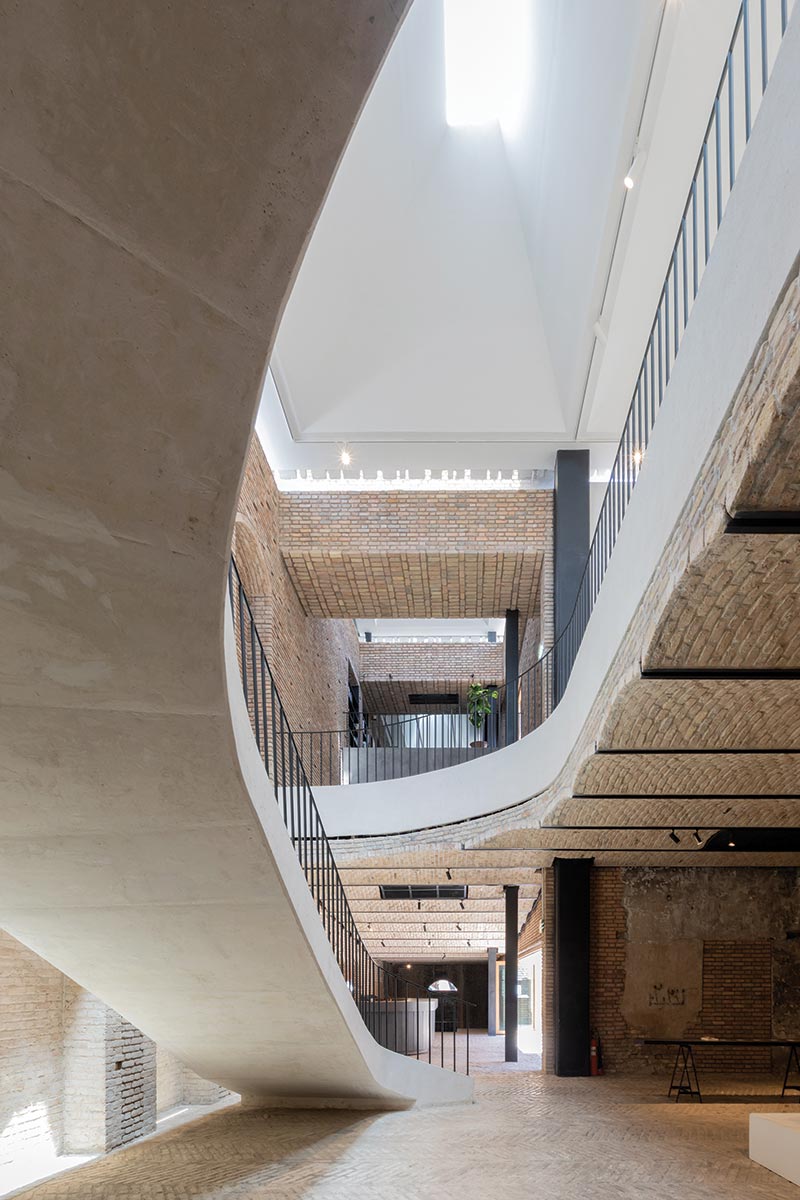 The architects opened the existing interior and created rooftop skylights (above), one illuminating a curved stair (top) that links the public spaces at grade with the galleries on level two. Photos © Iwan Baan with Ahang Ahmadi, click to enlarge.

Argo Factory—forced shut in 1970, due to environmental concerns—had been left derelict, with parts of the walls and roof pilfered for building materials, leaving it open to the sky. The ASA North team, which collaborated with Hobgood Architects of North Carolina in the conceptual-design phase, began renovations in 2016 by inserting a new foundation and structure while keeping the old skin of the load-bearing brick building. The architects created a distinctive roof: five varied pitched forms of cast-in-place concrete, resembling the pattern of the tin roofs of nearby buildings. These were to be clad with brass, but because of the 2019 economic sanctions on Iran and the soaring exchange rate, the design team determined concrete to be the most affordable substitute. Referred to as “hats” by ASA North principal Ahmadreza Schricker, the roofs float 20 inches above the top-level volumes of the building. Each hat has a skylight at the top, illuminating the galleries below, and houses the new mechanical and electrical systems between the outer and inner layers. 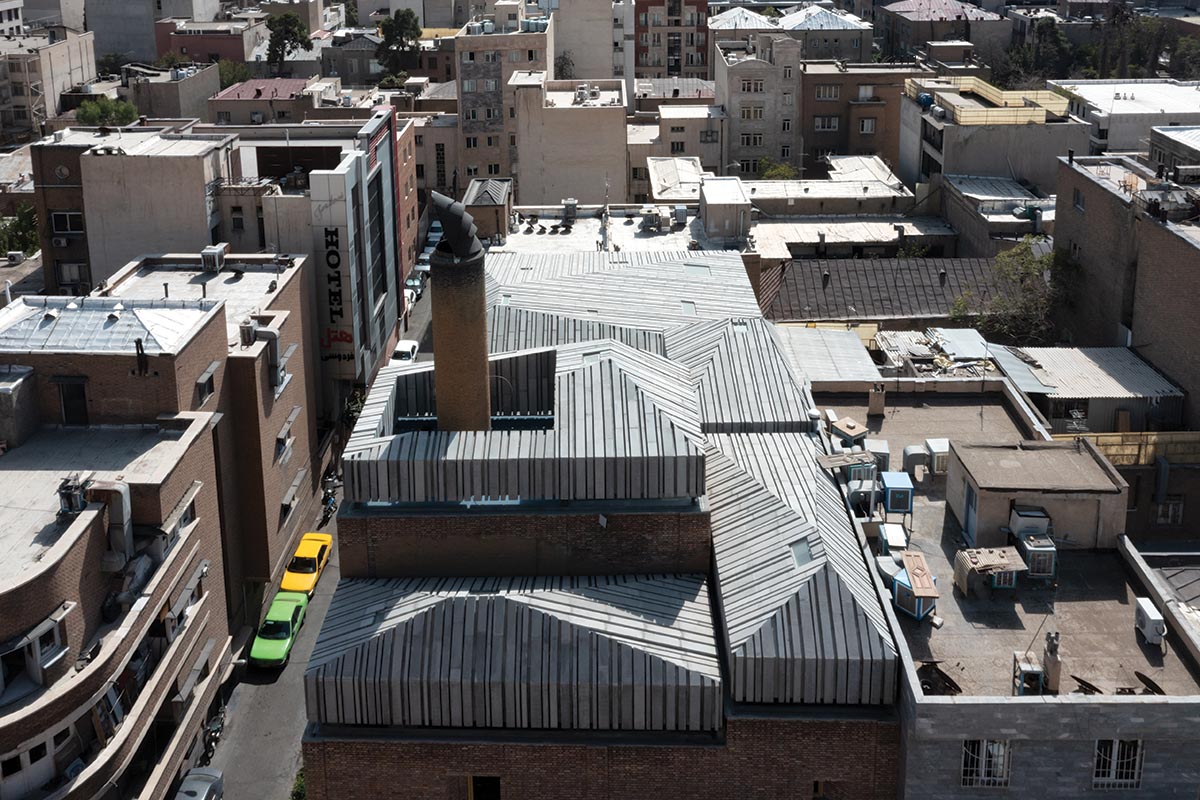 Midconstruction, the sudden rise of steel prices also meant an alternative solution. “At first, steel columns were specified, but when the sanctions happened, we could no longer afford to buy them. So we had to redesign the rest of the structure out of shear walls to be able to finish the project,” says Schricker. 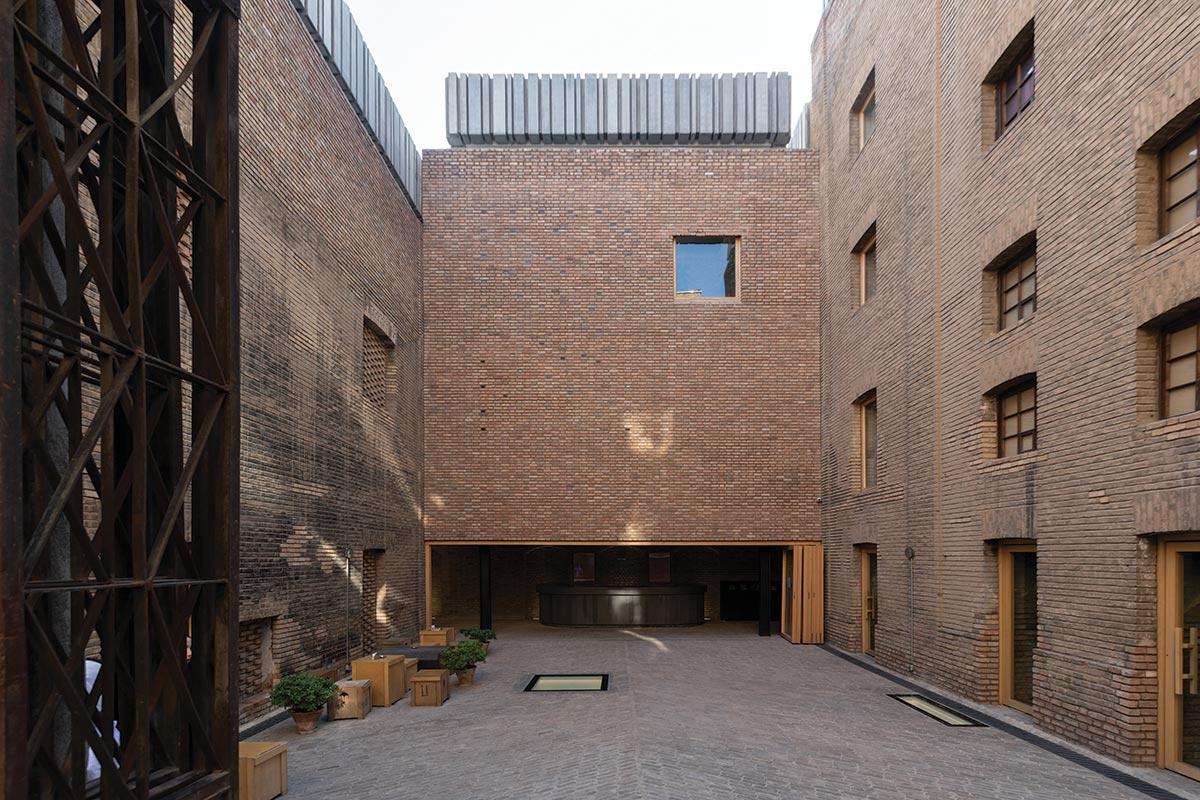 Clerestories provide additional daylight within, as does an entry courtyard (below), dotted with skylights for the basement. Photo © Iwan Baan with Ahang Ahmadi

Despite the economic challenges, the team completed the renovation in 2019, and Argo Factory opened to the public in January 2020. The previously occupiable space was expanded from 5,000 square feet on two levels to more than 20,000 square feet of climate-controlled spaces on three levels. Visitors enter the ground floor through a central courtyard/outdoor gallery, which faces the main reception area. This level also holds two gallery spaces, a café, and an art store. A dramatic curved staircase wends its way up to two other flexible galleries on the second floor. Structural engineer Behrang Bani Adam designed this feature as one poured-in-place concrete element, less than 10 inches thick. To create a seamless flow through the galleries here, ASA North slightly sloped the floor to connect the southern gallery to the northern gallery, which were at uneven levels. An oval-shaped elevator and a second staircase connect the northern gallery to the ground floor, completing the museum loop. 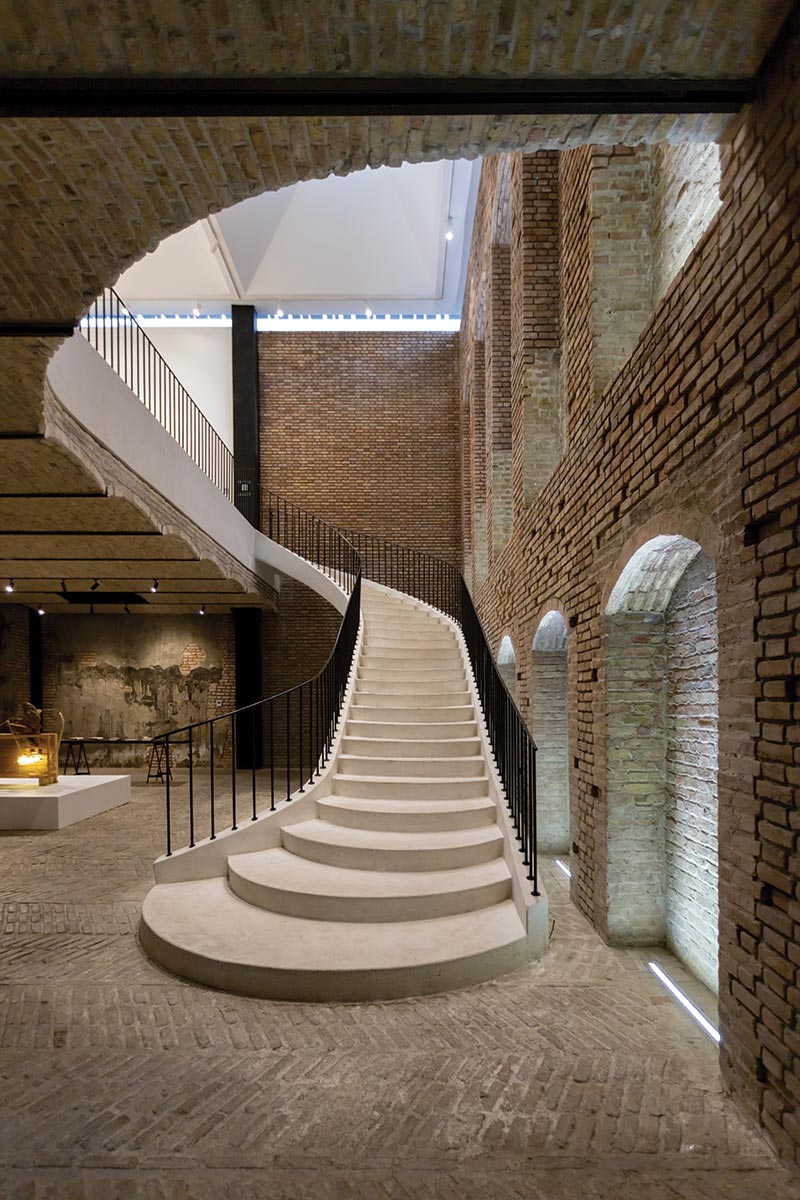 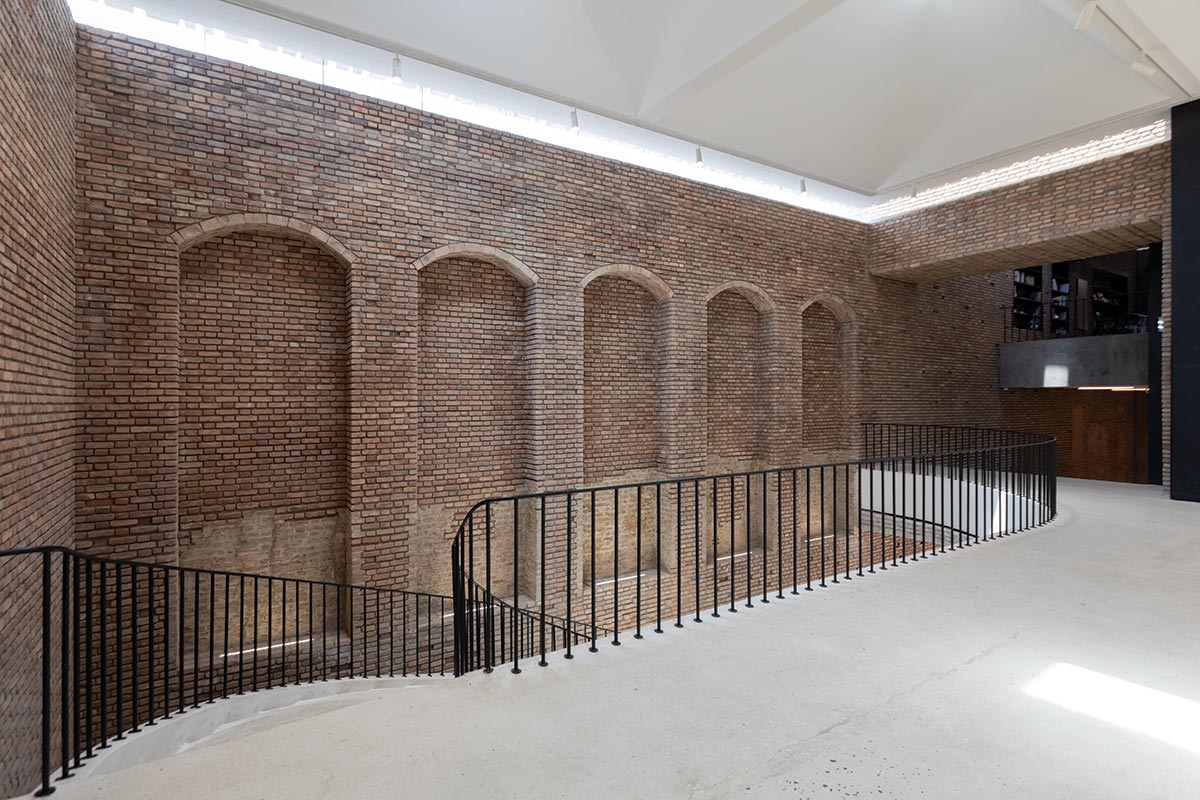 The dramatic stair serves as a performance space (3 & 4), viewable from the upper gallery (5) and vaulted ground-level areas. Photos © Iwan Baan with Ahang Ahmadi 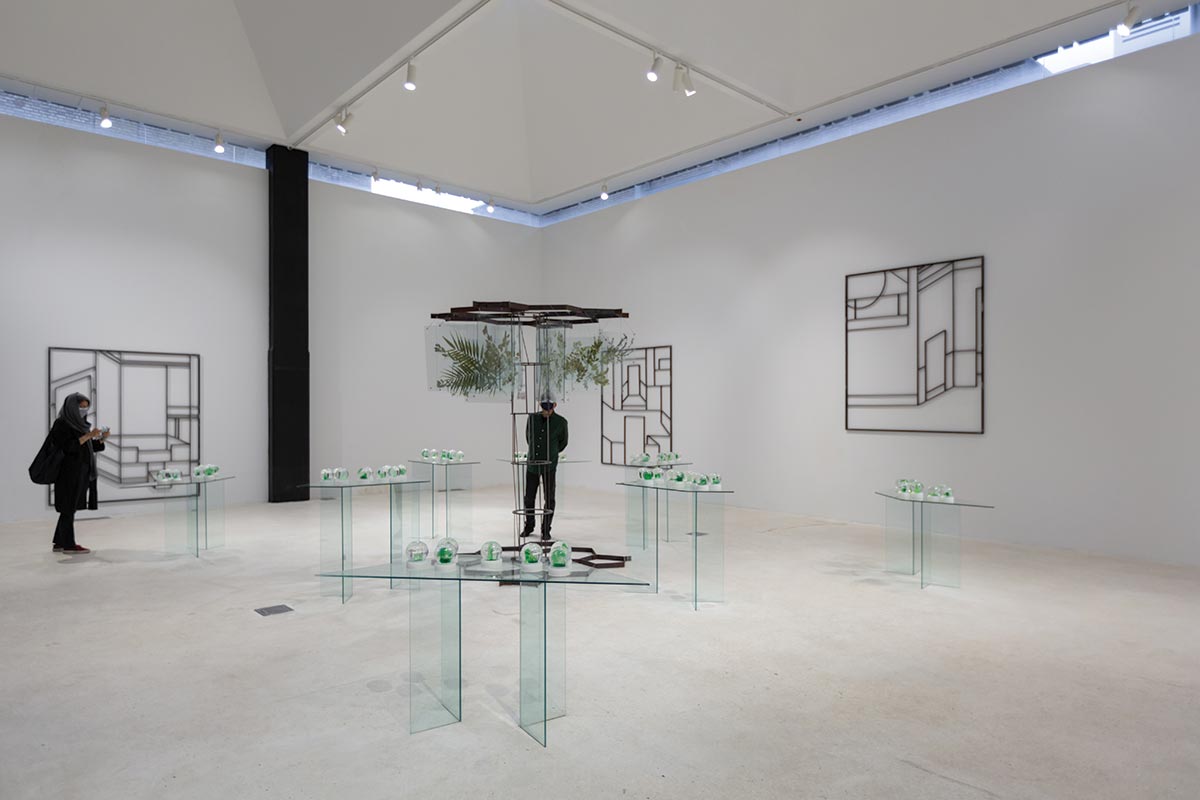 The basement contains another gallery, a performance room, and an archive where objects such as old Argo beer bottles are kept. A V.I.P. room with an outdoor observation deck and a private studio apartment for the owner are on the third floor. The ground floor café—serving nonalcoholic draft beer—is adjacent to a cast-in-place oval-shaped studio for an artist in residence. “All the new insertions are curved,” says Schricker. “The bar is curved, the stairs, the reception, the elevator, and the artist residency, distinguishing them from what was already there.”

“The palette is mainly brick, the new steel structure painted in black, and the added concrete structures,” says project manager Mona Jan-Ghorban. The cast-in-place concrete-slab floors support a suspended vaulted-brick ceiling above the ground level. The existing brick walls were kept and filled in where needed in the original Flemish pattern. The history of the building is evident in the slight differentiation of the brick layers: “Each architect or builder used the same pattern with different mortar. The mortar is where you can see what’s old and what’s new,” says Schricker.

Covid-19 broke out just one month after Argo Factory opened, and the building had to close several times over the last two years. The initial goal was to create a space for international cultural exchange, but pandemic travel restrictions forced a change in plans; the foundation works mostly with local artists while developing a virtual studio for global programming. Now the galleries are open again for visitors to see an exhibition or stop by the café while enjoying a distinctive neighborhood that is firmly holding on to its aura of the past. 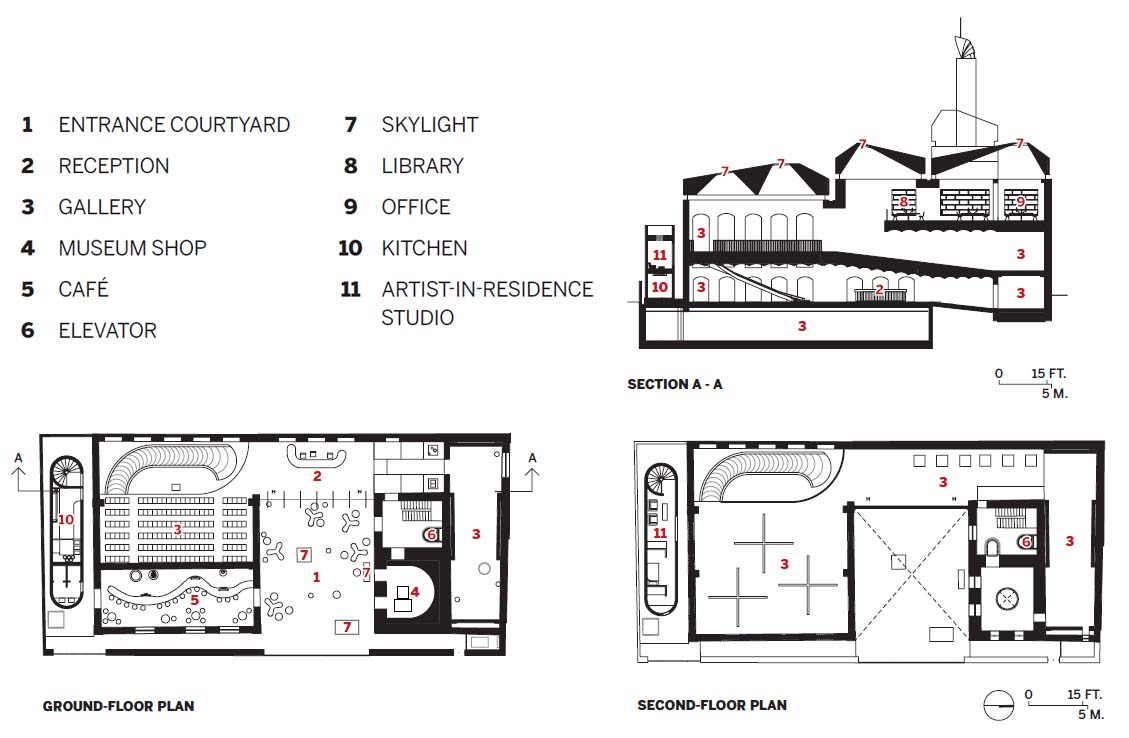 Yasaman Esmaili is an architect and educator with a practice, Studio Chahar, in Boston and Tehran.