The much-anticipated 1962 opening of Philharmonic Hall, a gleaming pavilion in travertine and glass at New York’s Lincoln Center, turned out to be an acoustical disaster, with the sound lambasted by critics—and players flummoxed by an inability to hear each other.

The architecture firm Harrison and Abramowitz had to stand back as a parade of sound experts tinkered for years with the acoustics designed by Bolt Beranek and Newman. The auditorium was finally rebuilt in 1976 by Philip Johnson, following the edicts of acoustician Cyril Harris, to emulate the long, rectangular shoebox style of the widely- admired Boston Symphony Hall. The tinkering continued, though, with wood and glass devices added to the orchestra shell.

Fast forward to late autumn 2021, when the hall has again been stripped back to its concrete-block enclosure and the interior is filled with scaffolding and some 400 construction workers, as the latest iteration of what is now called David Geffen Hall rushes headlong to its planned completion in fall 2022. 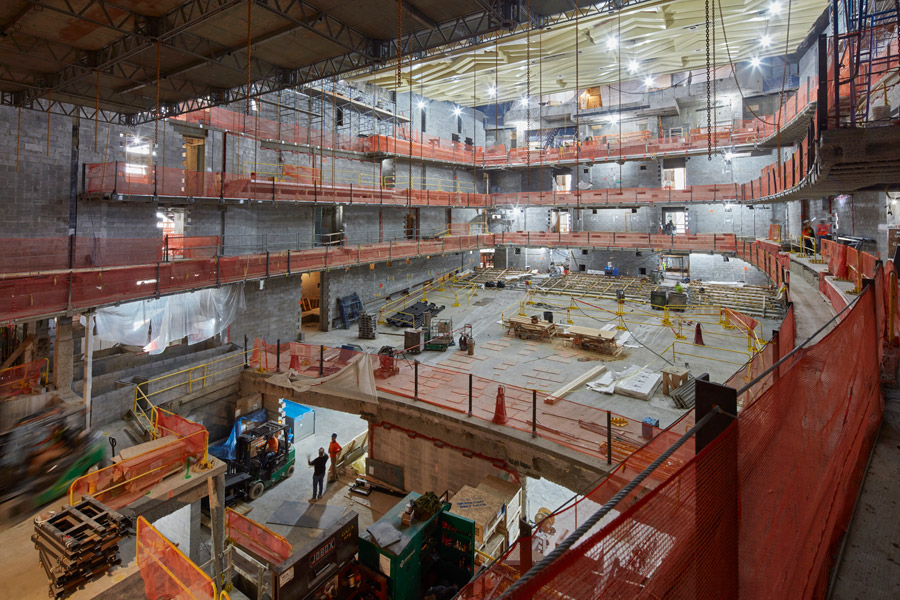 Lincoln Center and the New York Philharmonic have waffled for years about whether another major overhaul of the orchestra’s home could fix what seems to be a cursed hall—especially at an anticipated cost of $550 million. Yet, as Gary McCluskie, who is leading the auditorium redesign for Toronto-based Diamond Schmitt Architects, explains, “The world has changed. Audiences are looking for a new level of connectivity and engagement.” Even if the acoustics were not still deemed substandard, the chilly ambience of Johnson’s design put too many seats at too great a distance from the stage. The clients had initially asked Diamond Schmitt, Akustiks (a Norwalk, Connecticut-based sound consultant), and the London designer Thomas Heatherwick to explore rebuilding from scratch everything within the entire building envelope. But that approach was abandoned in 2017, when the construction cost and length of time the orchestra would be out of the hall was considered, and the team agreed the hall itself could be enhanced within its 1962 shell.

RECORD asked Paul Scarbrough, principal at Akustics, why the hall has been so acoustically obdurate. “There is a fundamental relationship between the volume of the hall and the area occupied by seating,” Scarbrough explained. When the hall was first designed, Lincoln Center officials overruled an agreement secured by Beranek to limit the seat count to 2,400. Scarbrough succeeded in convincing today’s leadership that 2,200 seats (down from 2,738) “establishes a much better relationship of cubic volume to sound absorption.”

There will be more changes. The stage is moving forward into the audience space 25 feet, making room for seating tiers to sweep around the stage platform. The move dramatically reduces the distance between performers and seats, to immerse listeners in the experience. Surrounding the players with side and rear-facing seats is often called a “vineyard” plan. “This design melds aspects of the vineyard with the tried-and-true shoebox,” explains Scarbrough. “There will be a lot of shoebox because that is the character of sound that people like the most.” 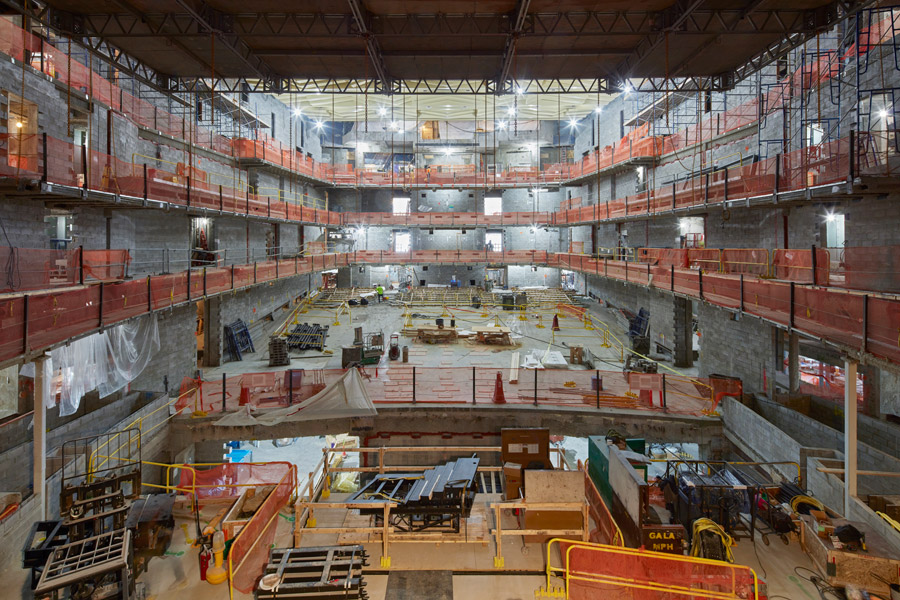 Diamond Schmitt has softened Johnson’s crisp rectilinearity and dispensed with the proscenium in favor of gently curving side walls with balconies that look molded into the wall rather than hung. Wood, solidly anchored to plaster over concrete masonry, boosts bass response and is a unifying element, said McCluskie, “wrapping the orchestra with the room.” The wavelike contours in the surface scatter higher sound frequencies.

Tod Williams and Billie Tsien replaced Heatherwick and are charged with rethinking all of the public spaces. Their scheme doubles the cramped lobby’s size and adds a massive video wall to share rehearsals and performances with passersby as well as audiences. Tsien and Williams are also reshaping stairs and concourses to accommodate larger events on the upper seating tiers and offer multi-level views to informal performance areas and public spaces. The exterior’s 1962 design remains—with discreet digital screens and lighting that can change the building’s mood and announce special events.

Originally the work was scheduled in two separate, months-long closures, across two years, to minimize the orchestra’s absence from the hall. But the Covid-mandated halt to performances made it possible to fast-track the construction and simplify the logistics. Rather than face the unenviable task of enticing post-pandemic audiences to a substandard hall, Lincoln Center and the Philharmonic will unveil an eagerly awaited, transformed venue almost two years early.

Johns Hopkins Loses a Gem by Williams and Tsien