The New York Philharmonic and Lincoln Center unveiled new details of the redesign of the perpetually troubled 1962 David Geffen Hall on March 9, as contractors rush to complete the project for an October 2022 opening.

In an unusual division of labor, Tod Williams and Billie Tsien were brought in to reimagine the hall’s lobby and other public spaces in 2019, joining the Toronto-based architecture firm Diamond Schmitt–designers of concert halls and opera houses in Montreal, Toronto and St. Petersburg, Russia–which was hired in 2015 to renovate the performance space, now coming to life clad in rippling panels of beech wood.

The original exterior of the Harrison and Abramovitz design remains unchanged: a glass pavilion fronted by tapering columns of travertine and bone-white painted concrete.

Reworking the lobby and the upper-level concourses was deemed essential not only to ease bottlenecks but to bring new life to spaces largely unaltered since the building opened. Those areas were stately and sober but conveyed little of the drama and intensity of the orchestral music-making within. “We wanted to bring glamour to the experience,” says Tsien.

The original scheme had a tall, narrow atrium that held the upper-tier concourses away from the glass facade facing what is now called Josie Robertson Plaza. Williams and Tsien extended the first-tier concourse at both the east and west ends of the atrium to allow audience members to enjoy a closer experience of the bustling plaza and also add vantage points for people to appreciate the swirl of movement on multiple levels of the hall at once. With a greater spatial generosity on upper tiers, the concourses will now extend socializing opportunities with bars that stay open for post-performance drinks as well as for informal concerts and talks. 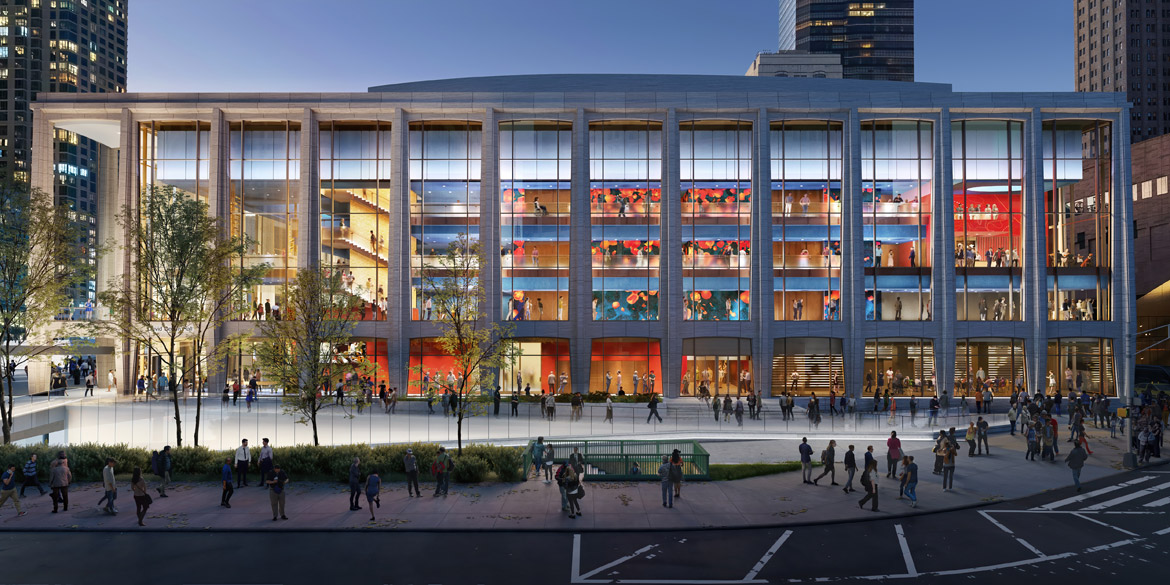 The outside of the auditorium, on all the tiers, will be faced with richly-hued felt shapes in red, fuchsia, orange, and blue that Tsien likens to falling flower petals. The hall will glow like a lantern through its expansive exterior windows, extending a more welcoming invitation to the public outside—and what the hall’s operators hope will be more diverse audiences.

The expanded lobby removes an array of ticket windows and the long lines that confronted concert goers immediately inside the lobby. Instead, a large video wall will engage audiences and off-hour visitors alike with free live-streams of performances and other works. Box-office functions will shift to a Welcome Center in the lobby that will also introduce newbies to information about classical performance and events across Lincoln Center, while an all-day cafe and bar will open out to include seats and tables on the plaza. On a long-ignored corner of the building, a new “Sidewalk Studio,” with an LED installation on the back wall by Williams and Tsien, will offer artist workshops, chamber concerts and community-oriented programs visible to passersby through the full-height glass.

The collaborative design between Williams Tsien and Diamond Schmitt is meant to leave no opportunity unaddressed to engage potential attendees, because so much is riding on this $550-million project. The Philharmonic and Lincoln Center intend not only to fix the obdurate acoustical shortcomings of the auditorium but to reverse declining orchestra attendance with a reboot of the experience of listening to live concerts and acting as a “living room” for New York City, as Lincoln Center puts it.

Hosted by Austin, Texas–based architect Aaron Prinz, Architectural Record’s DESIGN:ED podcast has featured the most renowned architects of our time—such as Art Gensler, Kengo Kuma, and Glenn Murcutt, as well as rising professionals in the next generation, such as Pascale Sablan, Michael Murphy, and Jenny Wu, all available in our library.