The Jacob K. Javits Convention Center is where New Yorkers stretch their imaginations, whether cosplaying as superheroes or beholding next-generation vehicles. Now this showcase of the cutting edge is reconnecting visitors to their elemental selves. In September, the Javits Center opened a one-acre working farm and fruit orchard that should annually yield 40,000 pounds of produce, starting next year.

Both oases are located on the rooftop of the facility’s recently completed 1.2 million-square-foot expansion. That enormous design-build project incorporated the talents of TVS Architecture in partnership with Moody Nolan and WXY, of which New York–based WXY oversaw the landscape design and a 16,200-square-foot glass pavilion that bisects the rooftop into eastern and western halves. Farm operator Brooklyn Grange consulted on the project, and Stantec was the landscape architect of record. 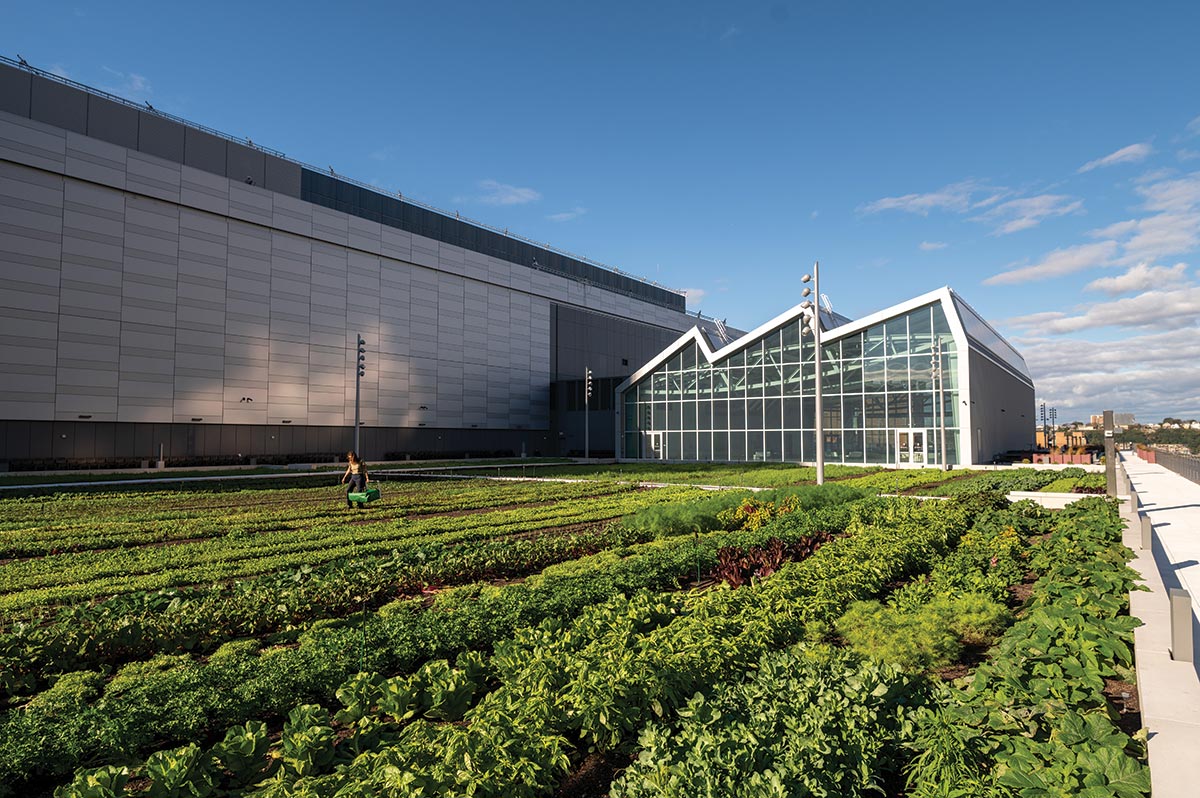 WXY cofounder Claire Weisz says the project brief grew to include agricultural production after TVS had assembled its design team, and that the extra program informed her studio’s approach to the pavilion. “The idea was to merge an event space with a farm,” Weisz says of the sawtooth-profile volume, which also includes a hangar-like bifold door that opens to the west-facing terrace and adjoining orchard. While typical convention-center activities will take place in the pavilion, the overall rooftop “is really meant to be perceived as different from the rest of Javits.”

The new elevated destinations do, however, subtly engage in dialogue with the underlying buildings. To keep the pavilion from taxing the structure, WXY determined that lenticular trusses would employ steel most efficiently. “At the same time, the truss system evokes the clear use of space frames in I.M. Pei’s original design,” Weisz notes. Brooklyn Grange cofounder Gwen Schantz adds that the farm “merges our time-tested green-roof farm model with the clean, minimalist aesthetic of the Javits events space.” Currently Brooklyn Grange is harvesting a fall crop of greens, squash, and radishes, for use in the various cafés and catering spots downstairs.

Schantz’s partner Anastasia Cole Plakias agrees with Weisz’s assessment that the rooftop feels calm and otherworldly. She also hopes those qualities are as inspiring as the movie trailers and concept cars to which fans make pilgrimages. “Rooftop farms can’t do the job of feeding all New Yorkers, but they can nurture our vision for a greener, more sustainable future.”