This website requires certain cookies to work and uses other cookies to help you have the best experience. By visiting this website, certain cookies have already been set, which you may delete and block. By closing this message or continuing to use our site, you agree to the use of cookies. Visit our updated privacy and cookie policy to learn more.
Home » In York, The Restored Clifford’s Tower Keeps Watch Over the City
Civic ArchitecturePark & Public Space Design

For 800 years Clifford’s Tower has watched over the English city of York. Perched atop a steep mound, the quatrefoil building was once the keep of a larger range of castle buildings that acted as a site of secular government in northern England. In a city of fairly uniform height, with few buildings taller than four or five stories, Clifford’s Tower and York Minster (one of the world’s most impressive cathedrals) sit as two architectural monuments that puncture the urban skyline. And now, following the completion of a restoration and interior reimagining led by London-based Hugh Broughton Architects, Clifford’s Tower can address its better-known neighbor across the city with equal pride.

The mound—or motte in English castle parlance—is older than the stone keep itself. Constructed over a Roman cemetery by William the Conqueror in the 1060s, the motte and original wooden tower above it were a strategic stronghold for controlling rebellions in the region. It was later a site of immense tragedy: in 1190, a pogrom led York’s Jews to seek protection within the tower. Those who were not murdered by the mob ultimately took their own lives in a massacre that left 150 people dead—the town’s entire Jewish population.

This is not only a site of built history, but also of profound cultural resonance. In the words of Jeremy Ashbee, head historic properties curator at the non-profit preservation group English Heritage, it is also a site “of national and regional importance”—though the stone building has stood as a hollow shell since a 1684 fire, when it was being used as an armaments store. The blaze transformed the structure into a roofless ruin with the heat shattering stone and leaving pink pigmentation where the flames were most intense. It has remained in this condition for the last three centuries, the castle around it disappearing amid redevelopment as Clifford’s Tower remained, the sole remnant of another age with occasional engineering work shoring it against subsidence. 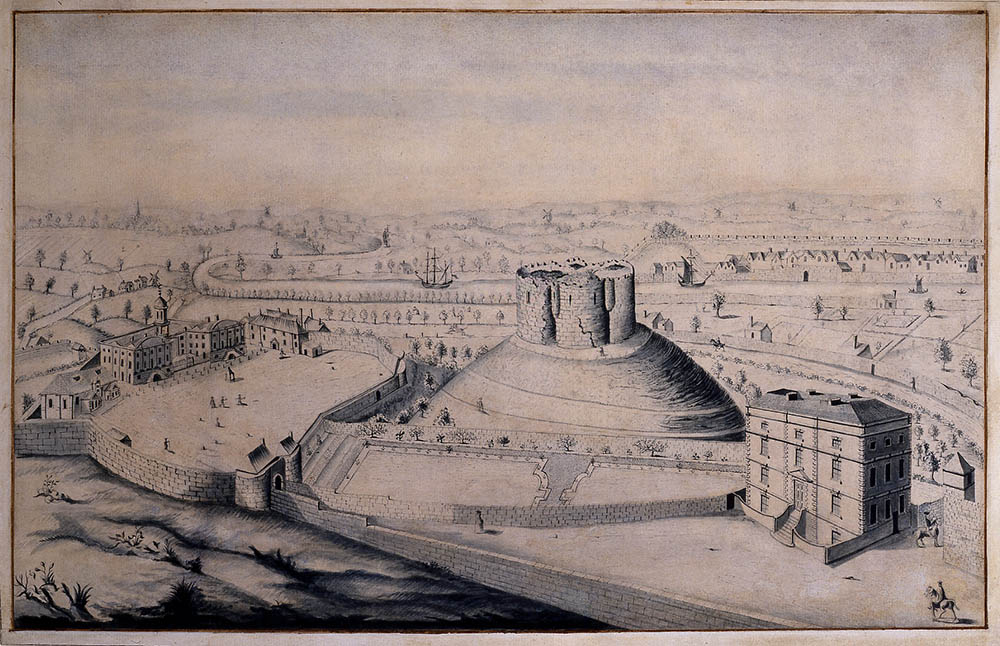 In 2014, English Heritage engaged Broughton to conserve the structure and open up new ways of viewing it, as well as the city beyond—in the architect’s words, “to improve access, both physical and intellectual.” At first blush, Broughton’s now-complete interventions seem remarkably simple, but they conceal a complexity necessitated by the site and the difficulties of restoring an 800-year-old structure.

Inside the hollow tower a four-legged glulam-timber structure has been inserted, with each upright built off-site then carefully craned in through a gap in the scaffolding above. Together, the legs support a broad new timber rooftop canopy that offers views across the city. Below it hangs a set of steel walkways with oak handrails, offering visitor access up and around the shell.

In line with best practice conservation principles, Broughton adopts a light touch. The walkway, legs, and canopy additions markedly distinguish themselves—in material and form—from the historic masonry. And with the weight of the new structure predominantly supported on just the four supports, the rooftop platform barely touches the stone walls. The new walkways make use of existing openings in the masonry and provide access to a small chapel and repaired stone spiral staircases that takes visitors to the roof.

A shadow gap between old and new elements allows sunlight to pierce through, revealing that the new additions are not structurally tied to the masonry and could be removed in the future without damaging the tower. On the interior, the team poured a shallow concrete slab at the ground floor, spreading the load of the new structure and helping funnel stormwater from downspouts hidden within the columns away from the site to avoid causing further subsidence of the mound.

The tower from above. Photo © Dirk Lindner

Broughton’s team worked alongside conservation specialists Martin Ashley Architects, who oversaw stonework, including repointing as well as repairs to arrow loops, fireplaces, and plaques. “We’ve sheltered a ruin, not attempted to restore it. We’ve protected the history inside,” says Martin Ashley. “The story needed protecting,” he adds, pointing out that elements of it—both physical and intangible—were remarkably fragile, from the fire-damaged, subsidence-cracked stone walls to the deep cultural histories embedded within.

It is up on the roof where the architects’ interventions are most powerful. Previously, a narrow walkway circumnavigated the top of the tower, precluding large group visits and offering an underwhelming visitor experience. The new rooftop platform—which has a square opening that allows sunlight and rainfall to penetrate the structure—offers 360-degree views across the city, including a fantastic vantage of the handsome towers of York Minster.

But when dealing with historic architecture, there must be compromises—which for Clifford’s Tower is access. The 55 steps leading up to the tower are steep, and despite studying various configurations involving ramps or elevators, the architects say they found no way to provide full accessibility without compromising the grass mound or the archaeology within.

In an age of globalized design, Broughton says, “we talk a lot about the general decay of craftsmanship, but this project shows the care and craftsmanship not just in conservation, but also in the new elements.” The stonework has indeed been attended to with deep respect and skill by local masons, who used locally sourced crushed stone for lime mortar repairs (which were color matched stone-by-stone) and meticulously conserved ornamentation. At the same time, the new additions are born of precise, modern engineering solutions and fabrication techniques.

All in, the project cost around $6.5 million—an expense manifested less in architectural spectacle or public presence than in craftsmanship, conservation, and intelligent intervention. In so doing, English Heritage and the architects have not only delivered incredible architectural value for the money but also put the site in good stead for its next 800 years. 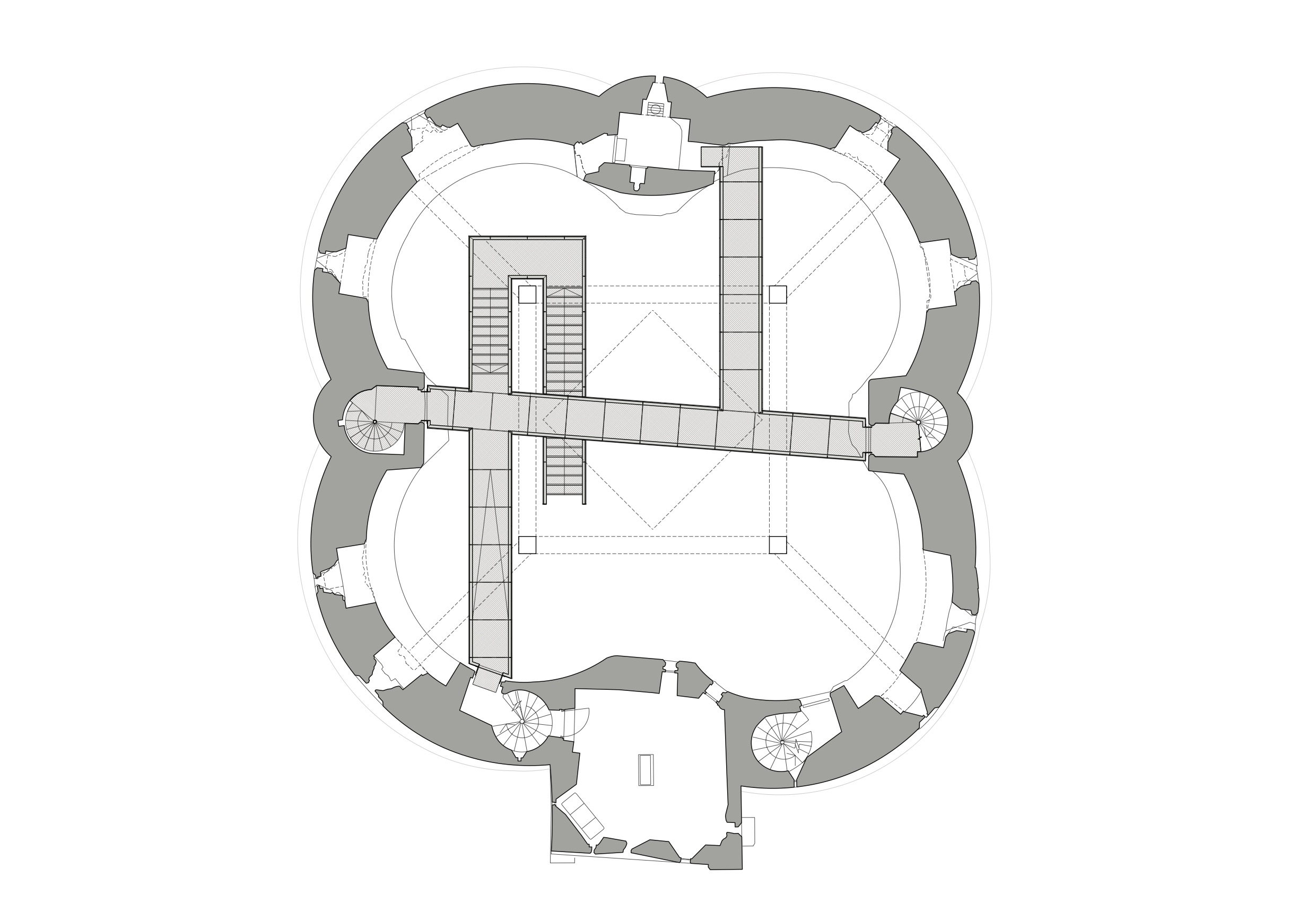 Will Jennings is a writer, visual, artist, curator and educator based in London.