GES-2 House of Culture in Moscow

Joining Moscow’s cathedrals, skyscrapers, and industrial chimneys spewing steam and smoke as stark vertical elements on the skyline are four bright blue slender pipes of GES-2 House of Culture. This  decommissioned 1907 Russian Revival-style power station stands out on the Bolotnaya Embankment in the central part of the city. Originally designed by Vasili Bashkirov, the building has been radically reinvented by Renzo Piano Building Workshop (RPBW) into a glowing contemporary art space, the new permanent home of the V-A-C Foundation, founded by director Teresa Mavica and Russia’s wealthiest man Leonid Mikhelson, to promote contemporary art from this country  and former ones in the Soviet Union .

GES-2, which opened in December, is the latest museum—much like the  Guggenheim Bilbao and Tate Modern—to search for new spatial means to incubate 21st century culture. The approach here, totaling over 36,600 square feet of space for art making and display, is particularly interesting. 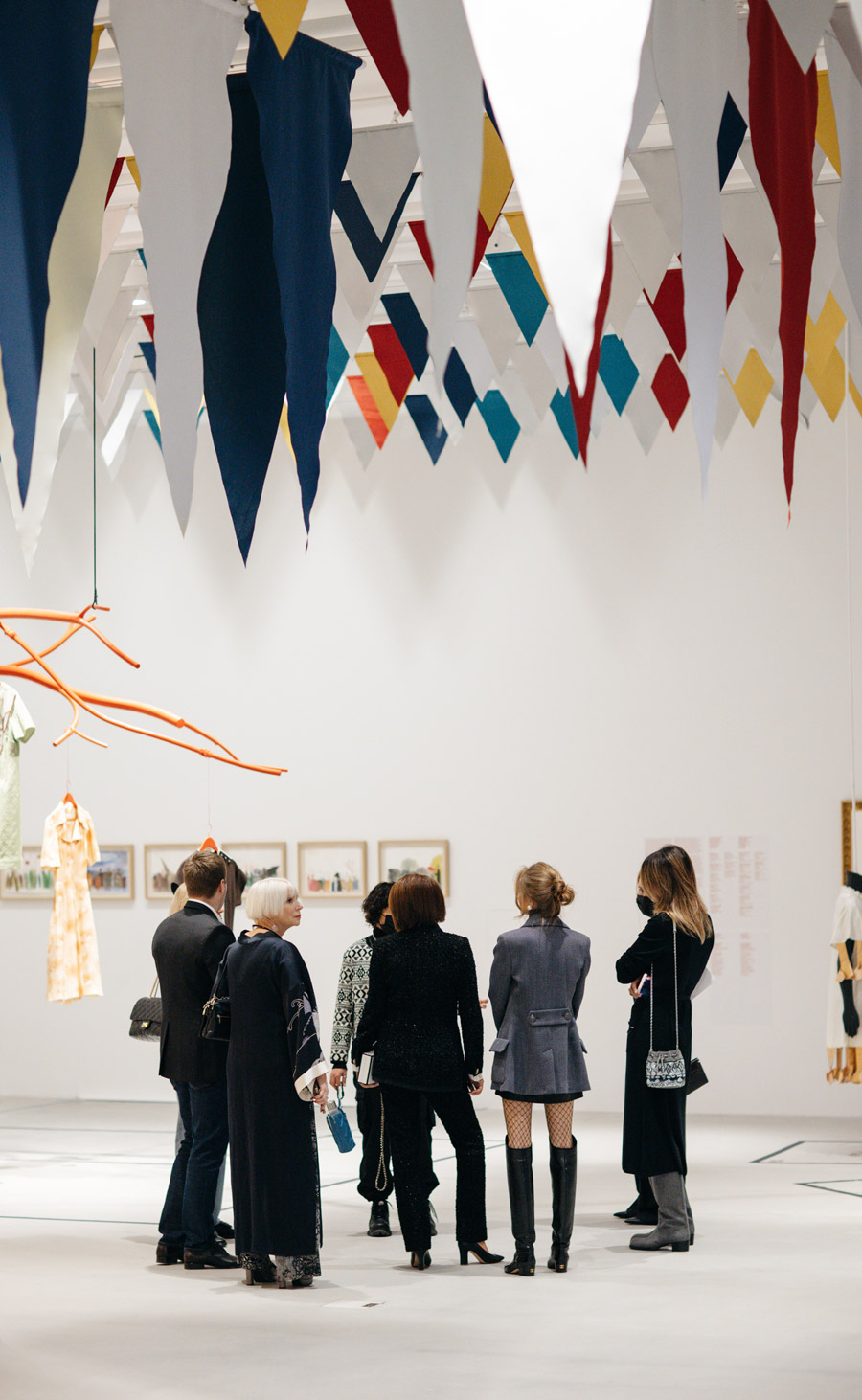 The program was co-developed through dialogue between RPBW and the V-A-C Foundation that began in 2015. It is less geared to the passive observation of culture than to encouraging visitors to witness and participate in artistic production. In addition to two live-in spaces for artists-in-residences, a multi-purpose auditorium, library, and classrooms, there are vast dedicated to vast un-programmed spaces designed to inspire new artistic processes. Even the subterranean carpark under a newly planted beech tree forest to the rear can be used for creative endeavors —in January it will host an upbeat electronic rave for 2,000 people.

The building has undergone an extensive re-imagination in which the external shell is the main survivor. The 3-foot-thick external masonry walls have been coated with lime plaster and light grey paint finish. The roof is now fully glazed, as Bashkirov intended but never implemented, and RPBW reinforced existing primary steel trusses by introducing a secondary structure of steel purlins and tension rods. The glazing is an equally complex piece of engineering: A lower layer of triple-insulated glass and an upper layer of laminated glass are covered with a grid of  photovoltaic cells, 54,000 square feet in size, that should produce up to 10 percent of the building’s energy. Because of the snowy long winters in the Russian capital, the roof can support over 3 feet of settled snow. This particular roof system can also send a small electrical charge into the p,v. cells to help melt the icy weight.

Those bright blue chimneys penetrating the Moscow skyline replace and reposition the power station’s previous ones. “The brick chimneys were too old, so we built new ones as a symbol and painted them Matisse blue. You need to go 230 feet up to get the clean air”, Piano says of the new flues that draw fresh air into the building’s passive ventilation system, rather than exuding fumes. 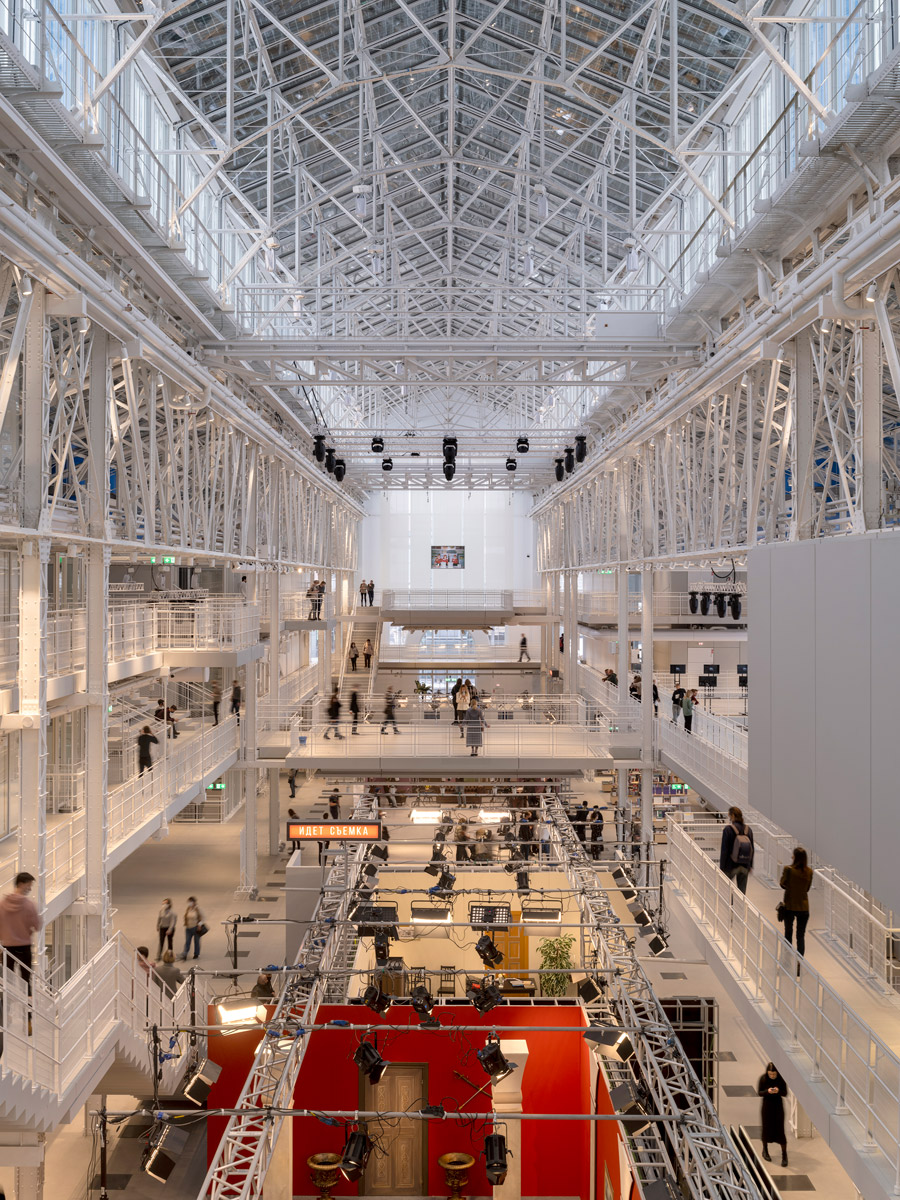 But the sophisticated engineering doesn’t only occur at the top of the building. Below ground RPBW carved out two levels for parking, open storage, and exhibitions. The painstaking effort involved digging down 16 feet, requiring the entire shell of the building to be supported on 2,040 jet grouted piles for over a year while the new spaces were excavated.  “The construction processes used in the engineering haven’t been done in Russia,” says RPBW architect Paolo Carignano.

Throughout its operating life, the power station had become hemmed in by a dense amalgamation of redundant industrial buildings, most of which have been cleared away to return the surrounding spaces GES-2  once had. “We were designing while demolishing,” said fellow RPBW architect Matthew Daubach, explaining that only by removing industrial accretion was the full spatial potential revealed. There is no clearer example of this than with a block of brick vaults running adjacent to the main building, which now sits under a pier-like pedestrian platform. When Piano first visited the site there was a 5-story office block here, and only upon entering did he discover ground-level vaulted rooms once used to distill Smirnoff vodka. RPBW demolished the offices above  and the  vaults now enclose workshops for 3D printing, metalwork, textiles, ceramics, and woodwork.

After stripping the space back to a shell, RPBW set about constructing new internal volumes. Entering from side facing the river, a visitor stands in a vast internal piazza, which is overlooked by those in offices, classrooms and the library. Stairs lead down to the cloakroom, toilets, and traditional gallery spaces. As the visitor continues through the interior, another cavernous space opens up, this time a Crystal-Palace-like axial space with gantries and high-level walkways, all available and un-programmed for future artists to explore. 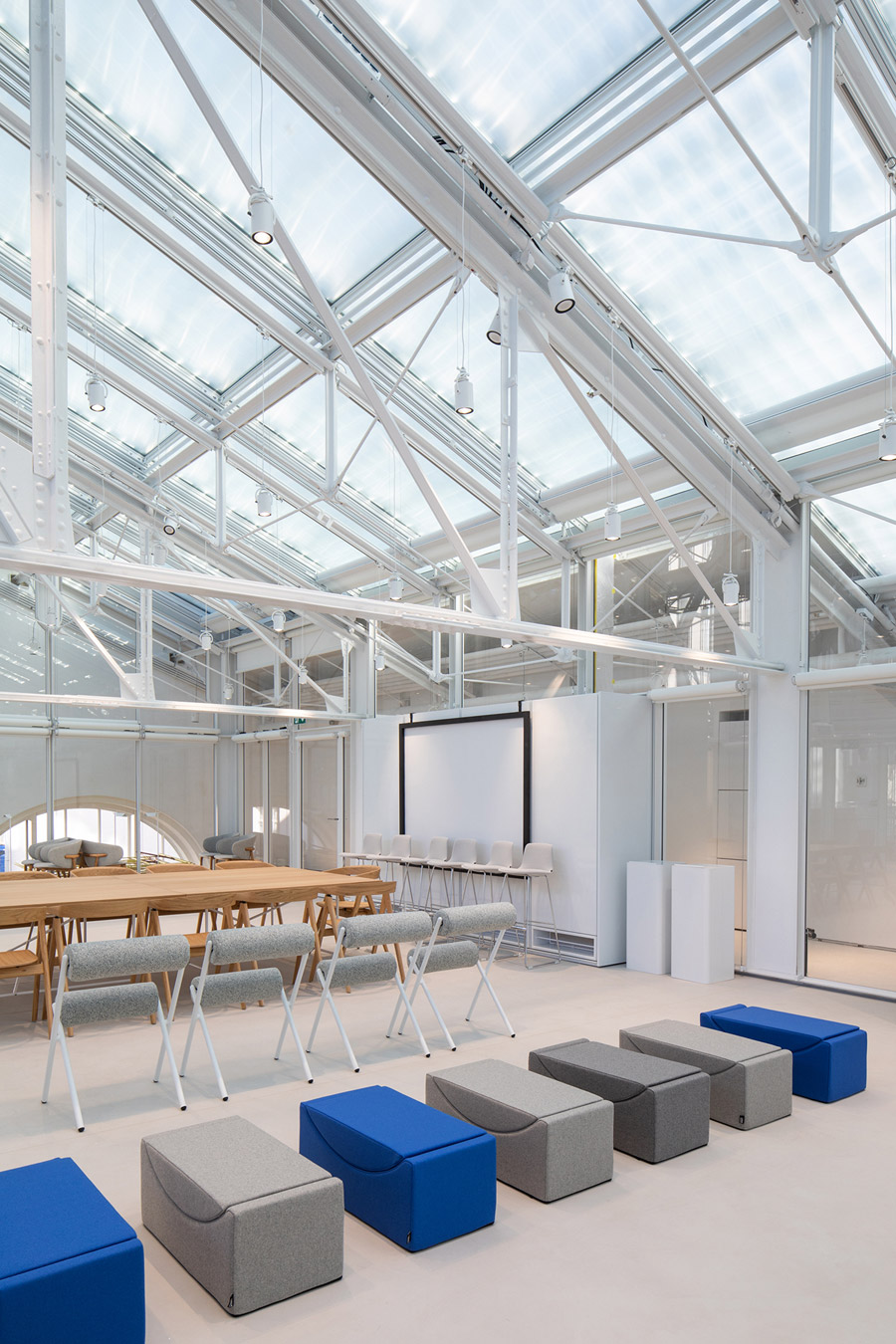 It could take time for these spaces to mature in tandem with specifically imagined creative projects, though the opening work by Icelandic artist Ragnar Kjartansson plays the building in exciting ways. His project Santa Barbara – A Living Sculpture reproduces 98 episodes of the US soap opera that aired on television from 1984 to 1993. The first Western soap broadcast in post-1989 Russia, it was hugely popular, fostering emergent capitalist notions with ideas of ambition, style, and hope. The work is formed as a series of stage sets, production suites, and backstage facilities from dressing room to prop and wig making laid out along the open-plan axis. Within GES-2, a new episode of Kjartansson’s playful homage will be filmed, edited, and broadcast, with the public allowed to wander around, observe, and perhaps even be captured on camera. Planned over the last three years, Kjartansson’s work is specifically designed for this context and architecture, “As a visual artist, each work can be trying to invent a new form,” he explains. “This is an experiment in trying to do that – film, theatre, performance art.”

Perhaps in a similar way Piano’s building attempts to turn the museum from static space of presentation towards experiential space of cultural production, advancing the ambition of the Centre Pompidou conceived fifty years ago. Piano hopes that it is that very presence of people which will provide its future power. “Poetry of light is essential, but also a poetry of movement. I love the fourth dimension – movement.”

Will Jennings is a writer, visual artist, curator and educator based in London.