It’s not every day that a design team gets a crack at conceiving an academic campus from the ground up. With their commission for the private Thaden School—eventually serving about 500 students in grades 6-12, on a 32-acre campus in Bentonville, Arkansas—EskewDumezRipple (EDR) and Marlon Blackwell Architects (MBA) seized this rare opportunity with an adventurous spirit befitting the pioneering approach to education that informed the master plan and architecture. 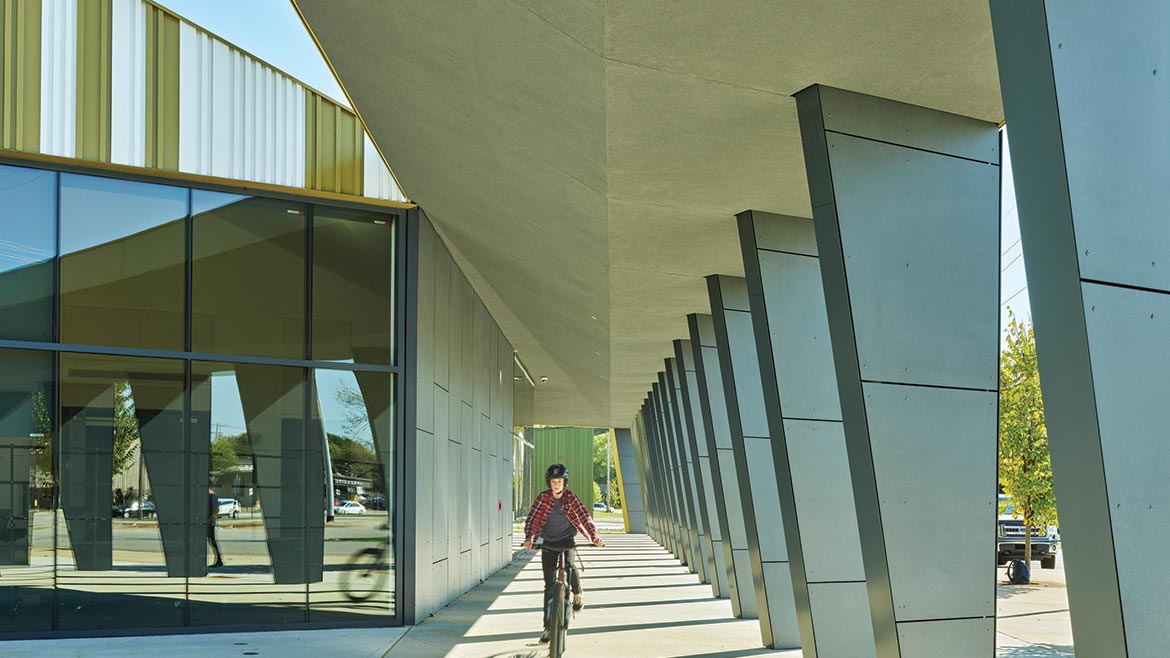 Envisioned by the Walton Family Foundation, the nonprofit led by the founders of Walmart, the school is part of the mission to groom the retail giant’s hometown as a sophisticated global headquarters that, with record-breaking population growth and new construction, remains pleasantly livable.

In 2015, following a feasibility study, the foundation recruited Clayton Marsh, then deputy dean of the college at Princeton University, to launch and head a brand-new school. “The brief was refreshing in its open-endedness,” says Marsh, about the planned coed, nonsectarian college-prep day school with a focus on creativity. To foster inclusivity, families would pay tuition based on their resources. (Marsh says the student body is socioeconomically diverse, with about 80 percent of the families paying an amount below the maximum.)

The Home Building (1), a stick-frame structure clad in board and batten, houses the library and dining hall (2). Photos © Tim Hursley (1 & 2) 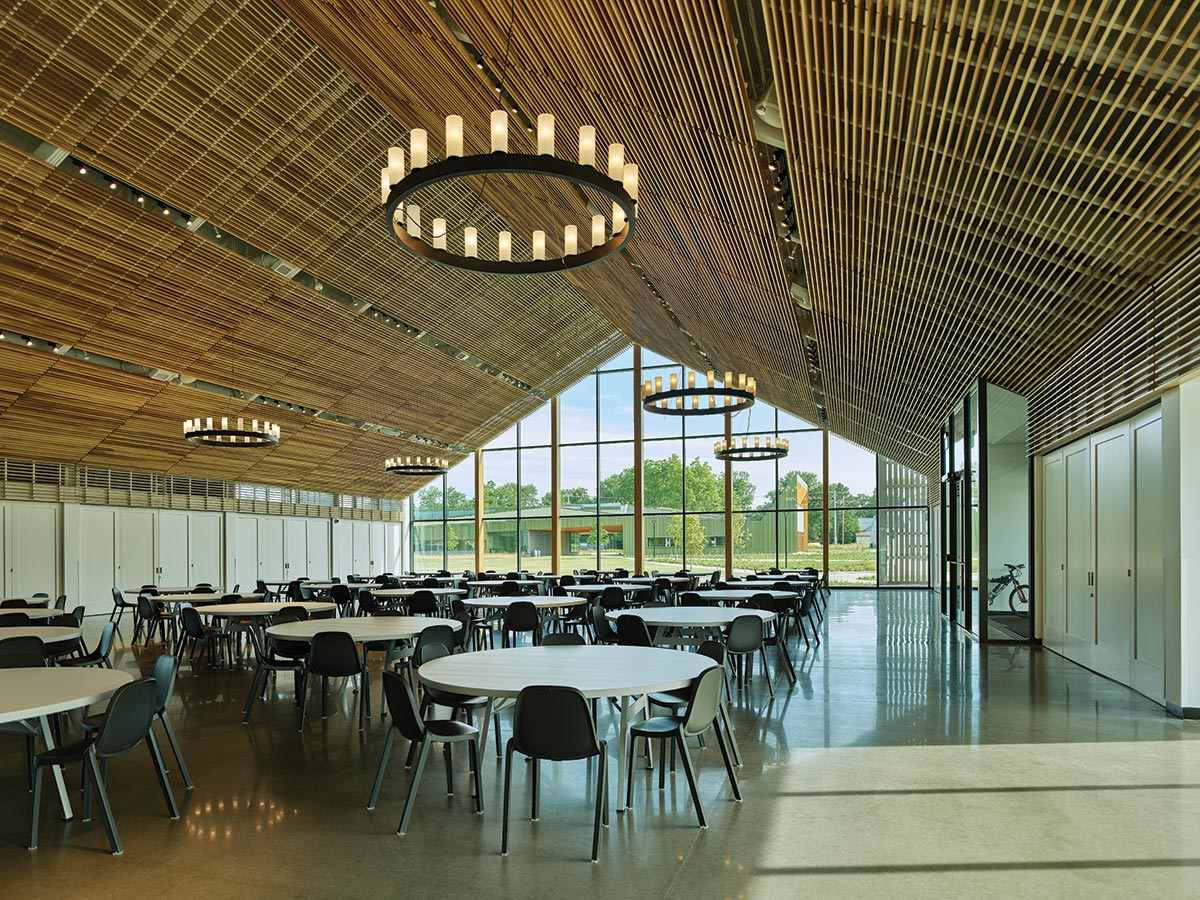 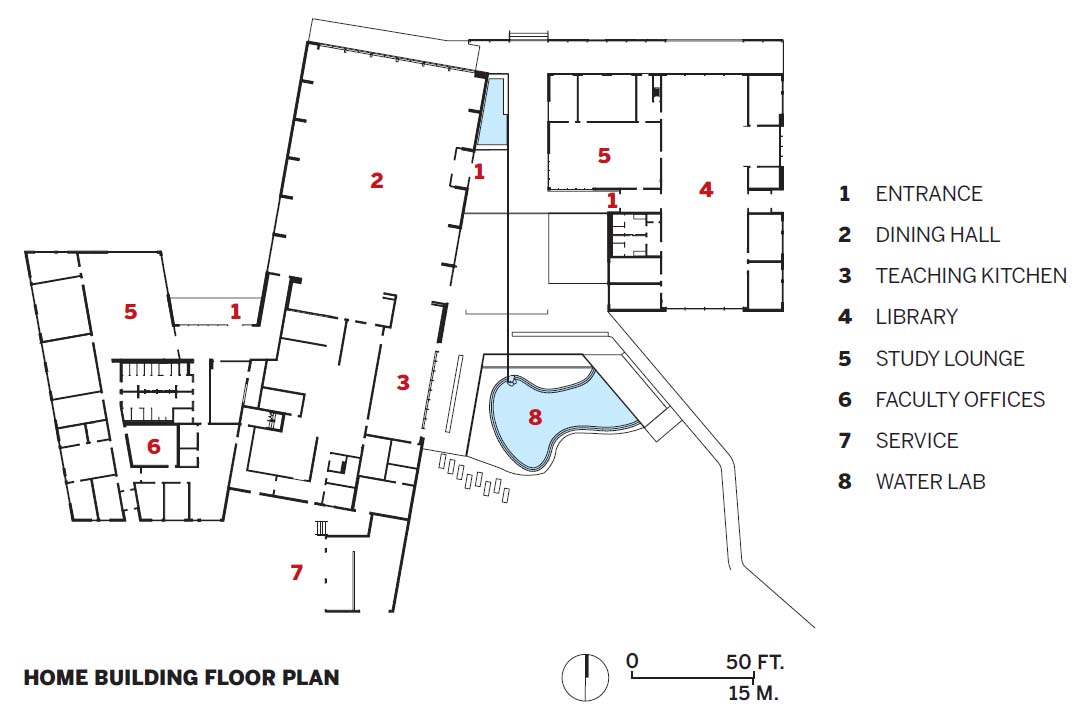 To develop the curriculum, Marsh took his cues from the locale. For example, “you could not overlook the culture of cycling that was gaining traction here,” he says. (Bentonville calls itself the Mountain Biking Capital of the World.) Recalling a former Princeton colleague who used the process of disassembling and reassembling motorcycles to engage students in the principles of mathematics, physics, and engineering, Marsh considered the bicycle as a medium for Thaden. And hoping to partner with community organizations, he also thought about how a nearby culinary institute could help students delve into the economics, politics, and biochemistry of the plate. In addition, he considered the role of a local film festival and the history of art-making in Northwest Arkansas. Thus evolved the three signature programs of Thaden—Wheels, Meals, and Reels—that would guide an interdisciplinary approach to learning, with an emphasis on making.

While putting together the curriculum and faculty, Marsh helped craft an RFQ for a campus that would complement the emerging pedagogy and become part of the city’s fabric, both programmatically and physically. The Walton foundation, which has created a design-excellence program for Northwest Arkansas, invited a short list of firms to submit for the project. EDR and MBA were selected to collaborate on both the campus master plan and the architecture. “What set EDR and MBA apart,” says Marsh, “was their ability to translate our vision for the school into architectural forms and spaces.” 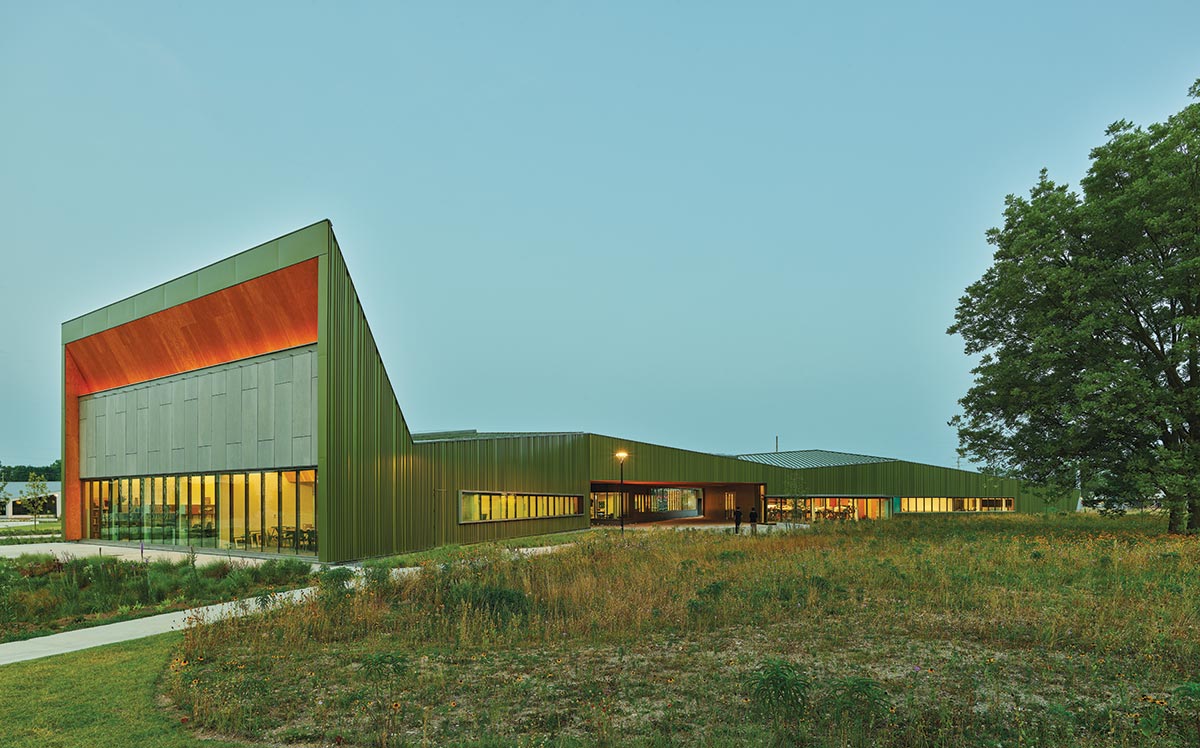 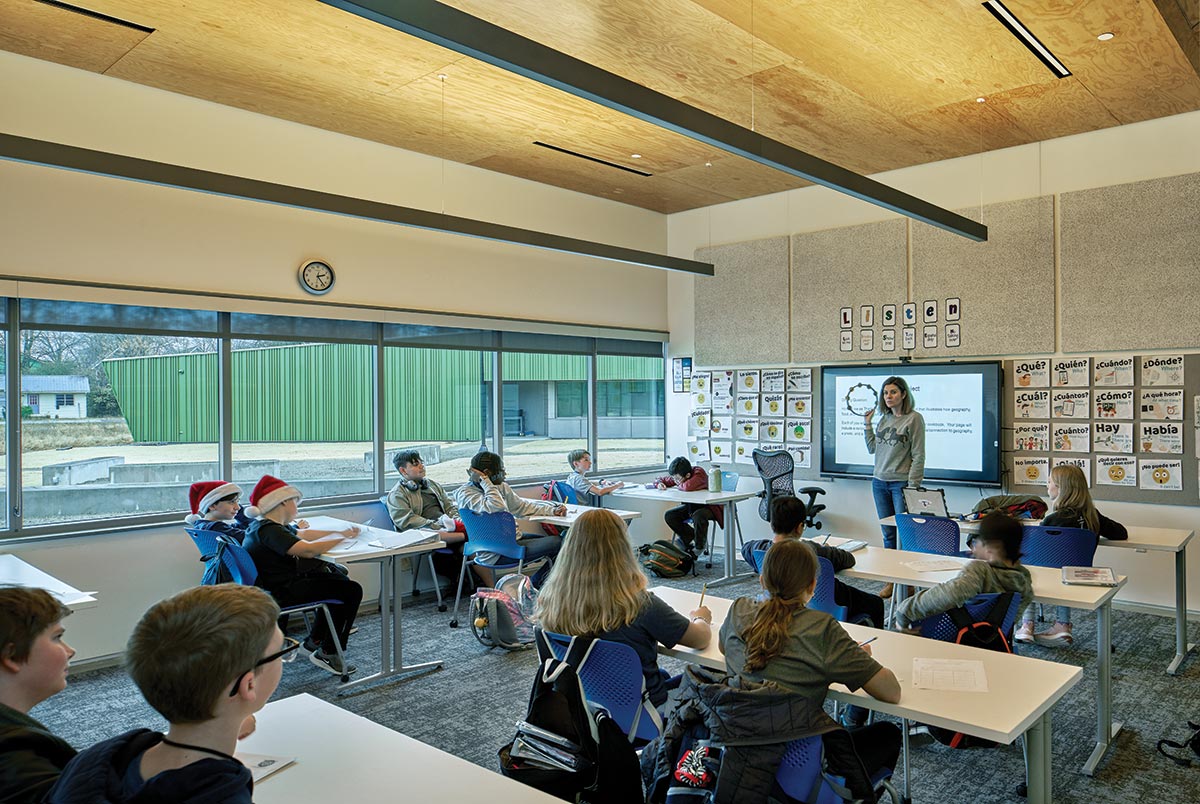 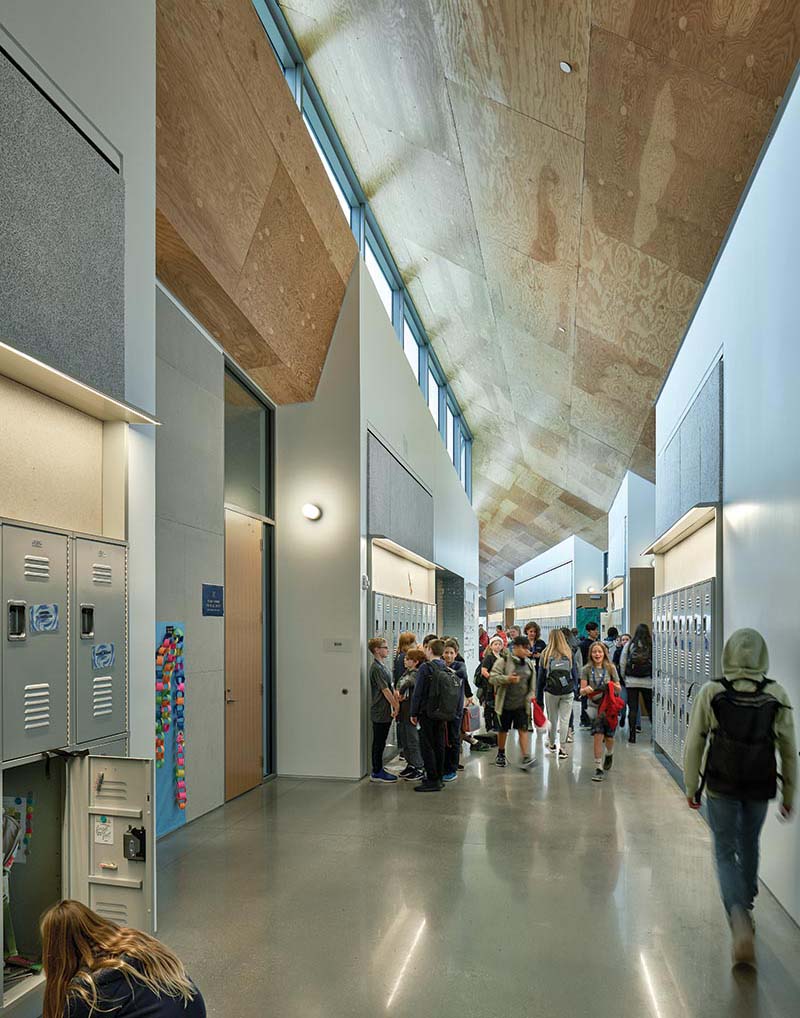 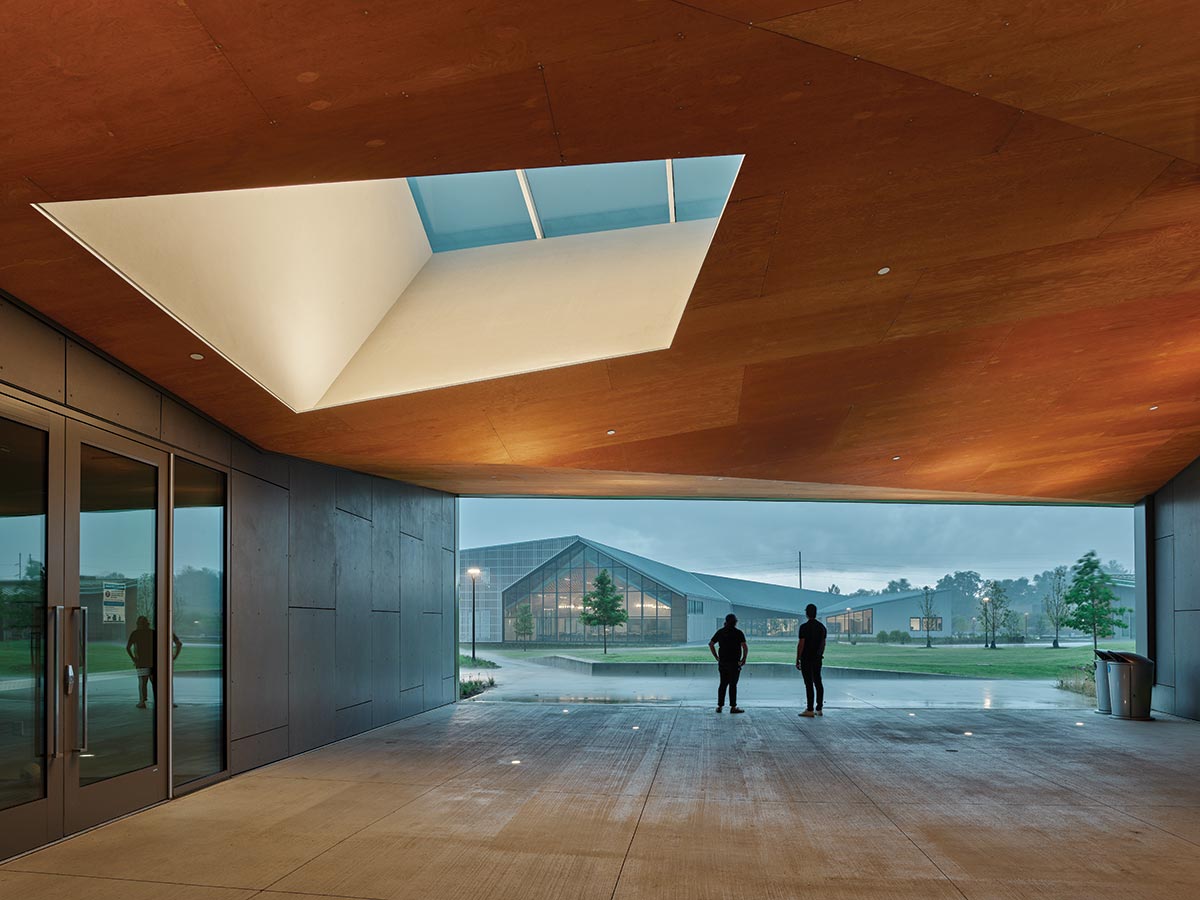 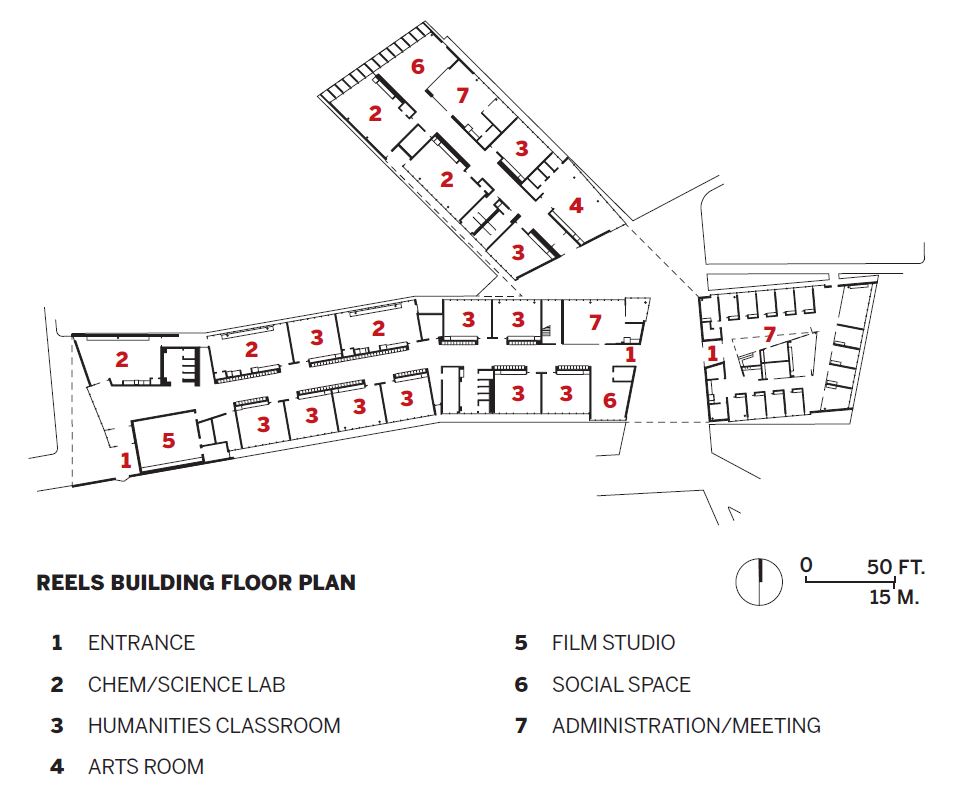 The site, a former county fairgrounds, was an open field, bordered by single-family houses and light industry and bifurcated by a street running north–south to Bentonville’s nearby main square. The planning challenge involved reconciling the small amount of space required for the program—just 136,000 square feet—and the enormous plot of land. “We needed to develop a master plan that was as much about the landscape as the buildings,” says Steve Dumez, EDR principal and director of design; campus-planning collaborator Andropogon adroitly handled the landscape. “And it had to respond to Marsh’s idea of the classroom being everywhere, with every space—inside and out—conducive to learning.” In early conversations, Marsh had memorably said, “When it’s cold, the kids need to feel the weather, and when it rains, they need to get wet.” According to Christian Rodriguez, EDR’s project architect, “That directive led us to arrive early at the concept of a porous campus” of several low-slung single-story structures—rather than one large building—with many openings connecting them to meadows, vegetable and rain gardens, lawns, water features, and meandering paths. On a recent afternoon, as a rainstorm moved in, children hesitated on a covered porch before flipping up hoodies and dashing across the quad to their next classes—an effective way of learning the vagaries of mother nature. 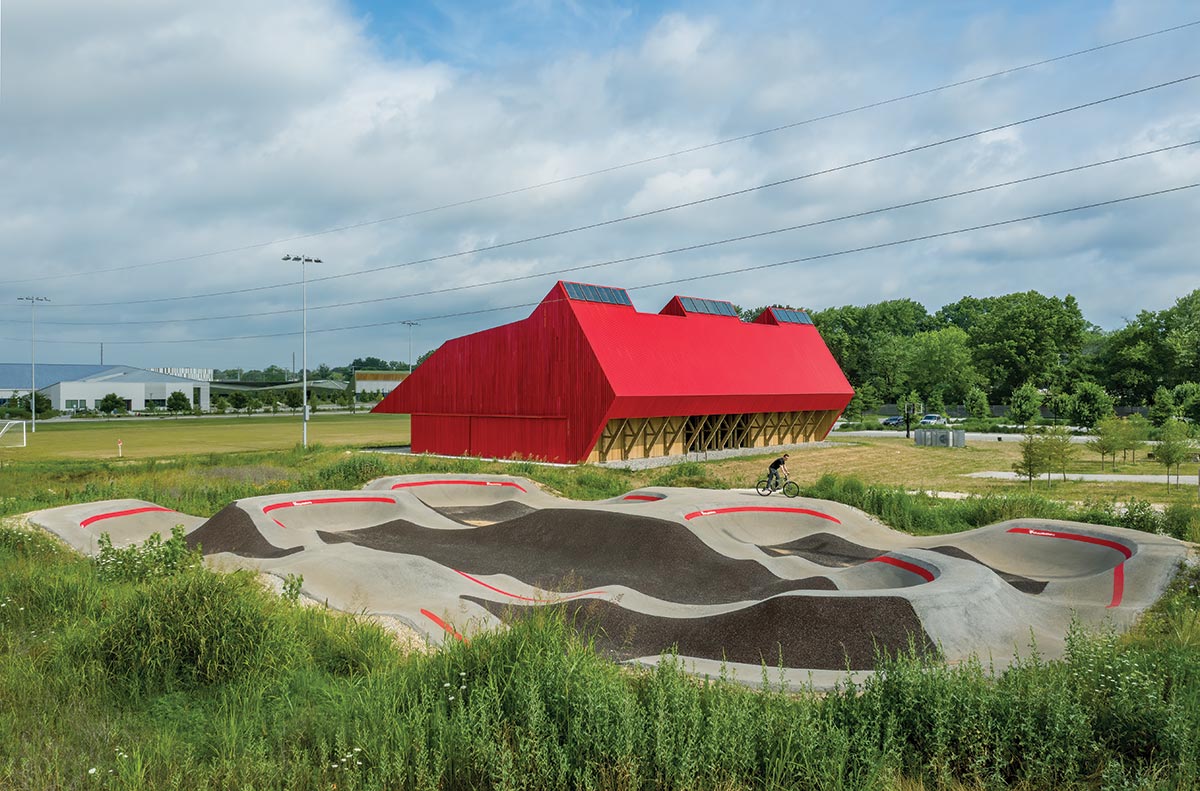 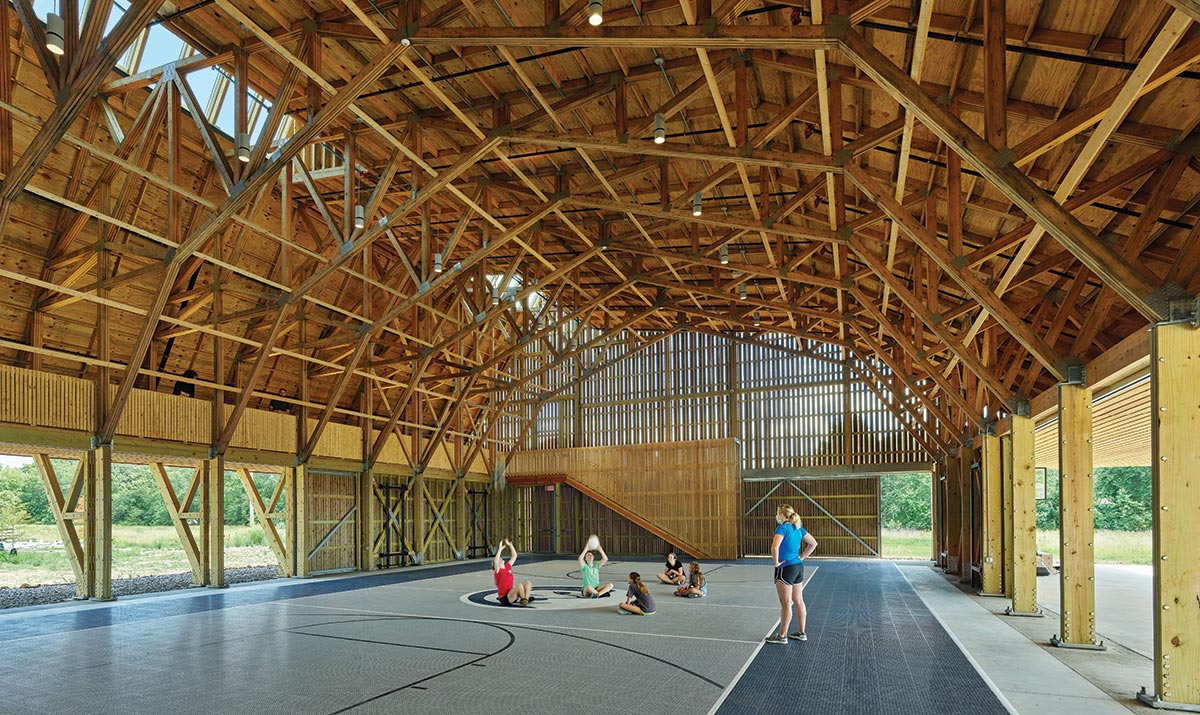 The Bike Barn (7) serves as a gym (8) as well as a hub for cyclists using the nearby network of paths and adjacent pump track (7, in foreground). Photos © Tim Hursley (7 & 8) 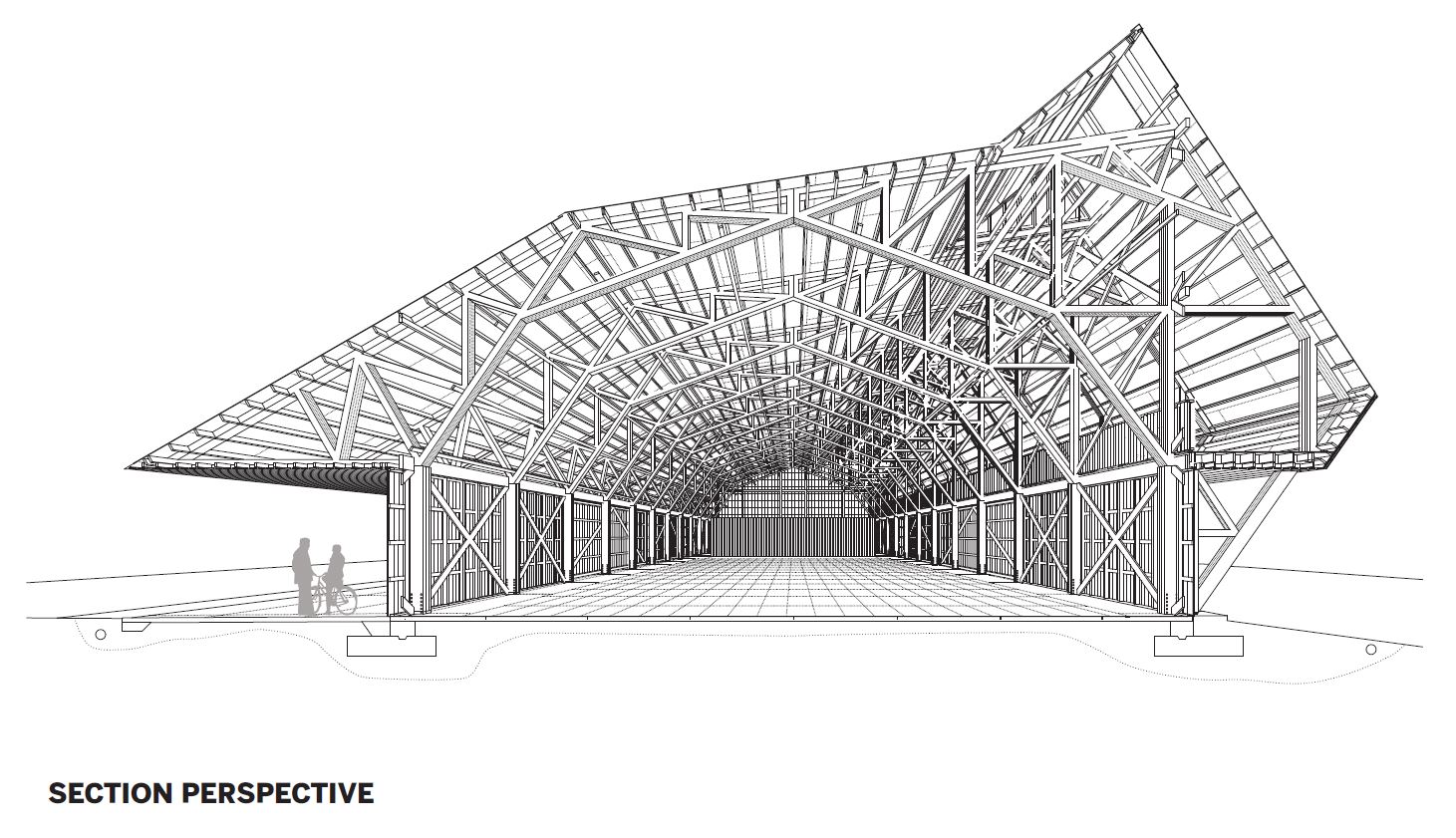 The school was developed in phases, starting with a temporary modular facility designed by EDR that opened in 2017 (and is now gone). Four main buildings embrace a generous quad (with geothermal wells underneath) at their center. Each of the buildings embodies a signature program: Wheels, a lithe, snaking classroom building for math and physics, including a bike workshop; Reels, another serpentine academic building, for social sciences, art, and film, as well as administration; and Meals, or the Home building, a zigzagging structure with a soaring dining hall, a test kitchen, and library. The Bike Barn—which sits by itself across the street that cuts the campus in two—is a bright red gambrel-roofed, naturally ventilated wood structure, abutting playing fields and a pump track for bikes. The barn serves as a gymnasium and hub for cyclists using the network of nearby trails. The most recent addition, the Performance building, houses a state-of-the-art auditorium and practice rooms; on the northwest edge of campus, it is easily accessed by the public. An outlier—the diminutive white clapboard Thaden House, the relocated and renovated childhood home of Bentonville born-and-bred pioneering aviator Louise Thaden, for whom the school is named—contains the admissions office and sits along the dropoff area, next to a maple bosque. 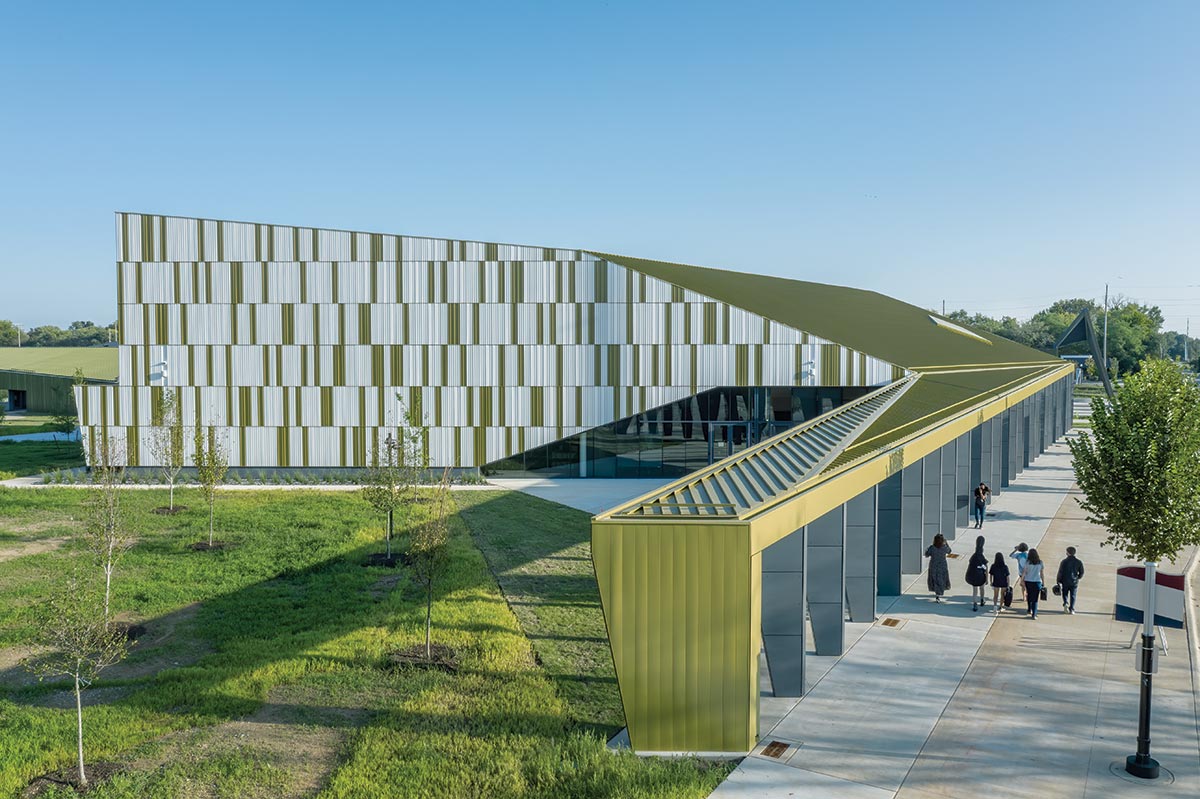 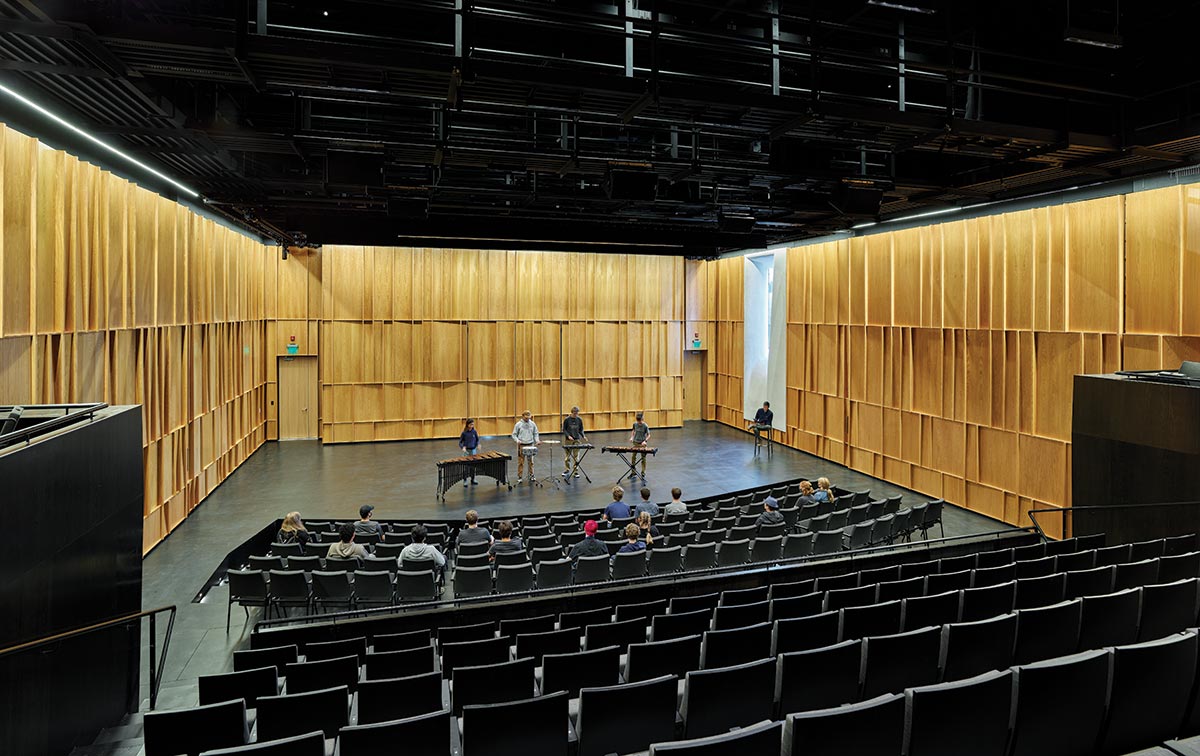 A state-of-the-art wood-paneled auditorium (10) is the heart of the Performance building (9), which is also used by the local community. Photos © Tim Hursley (9 & 10) 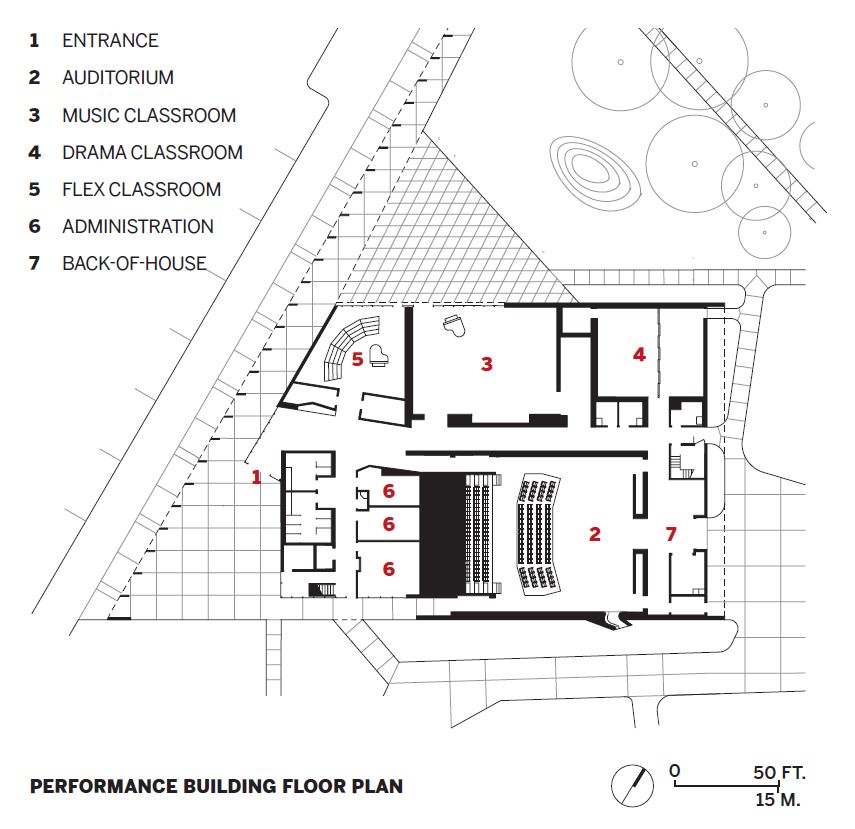 Inspired by the poultry sheds that dot the landscape, the team originally conceived the campus as a series of linear volumes running east–west. The architects divided the design of the structures, with EDR taking on the large Home building and MBA the classroom buildings, performance center, and barn. The forms evolved as the project progressed. For its building, EDR arranged the programmatic volumes into a Z-shape, and created a cohesive whole by “draping” the assemblage with a standing-seam roof. For the Wheels and Reels buildings, MBA cranked the linear forms and added cut-throughs, like porches and breezeways, to break up the long, narrow buildings’ walls. These openings, along with those of the Home building, establish a dialogue among structures across the quad, and can be used to bring learning outdoors. The articulation of the roofs—what MBA principal Marlon Blackwell likes to call “pitching and rolling”—defines interior spaces and zones. “We thought about this as a type of carapace, where wall and roof are of the same material,” says the architect. Pleating on these surfaces formed clerestories to bring daylight into the double-loaded corridors. “The client believes the life of the school takes place in the hallways,” notes MBA project manager Josh Matthews.

The Wheels Building houses classrooms and a bike workshop (11), which opens to the street behind a soaring metal canopy (12). A broad hallway is also a gathering place (13). Photos © Tim Hursley 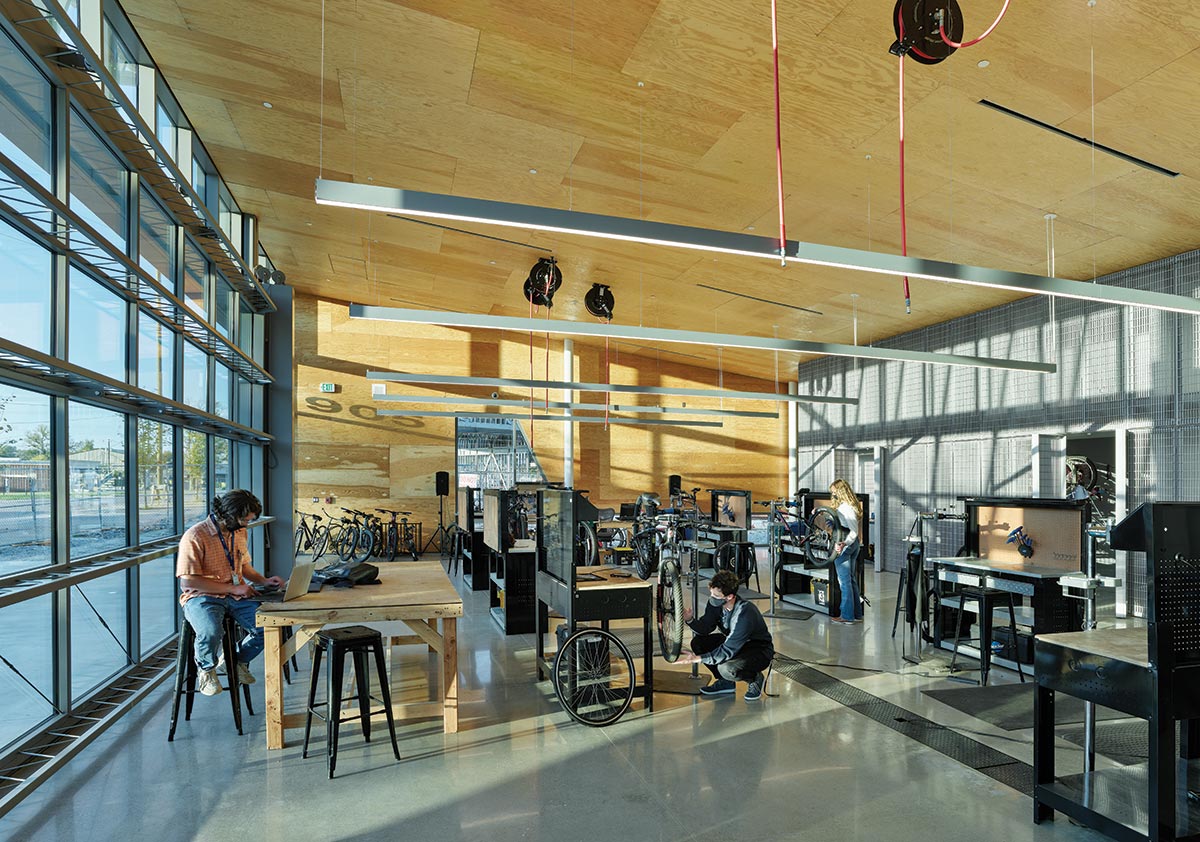 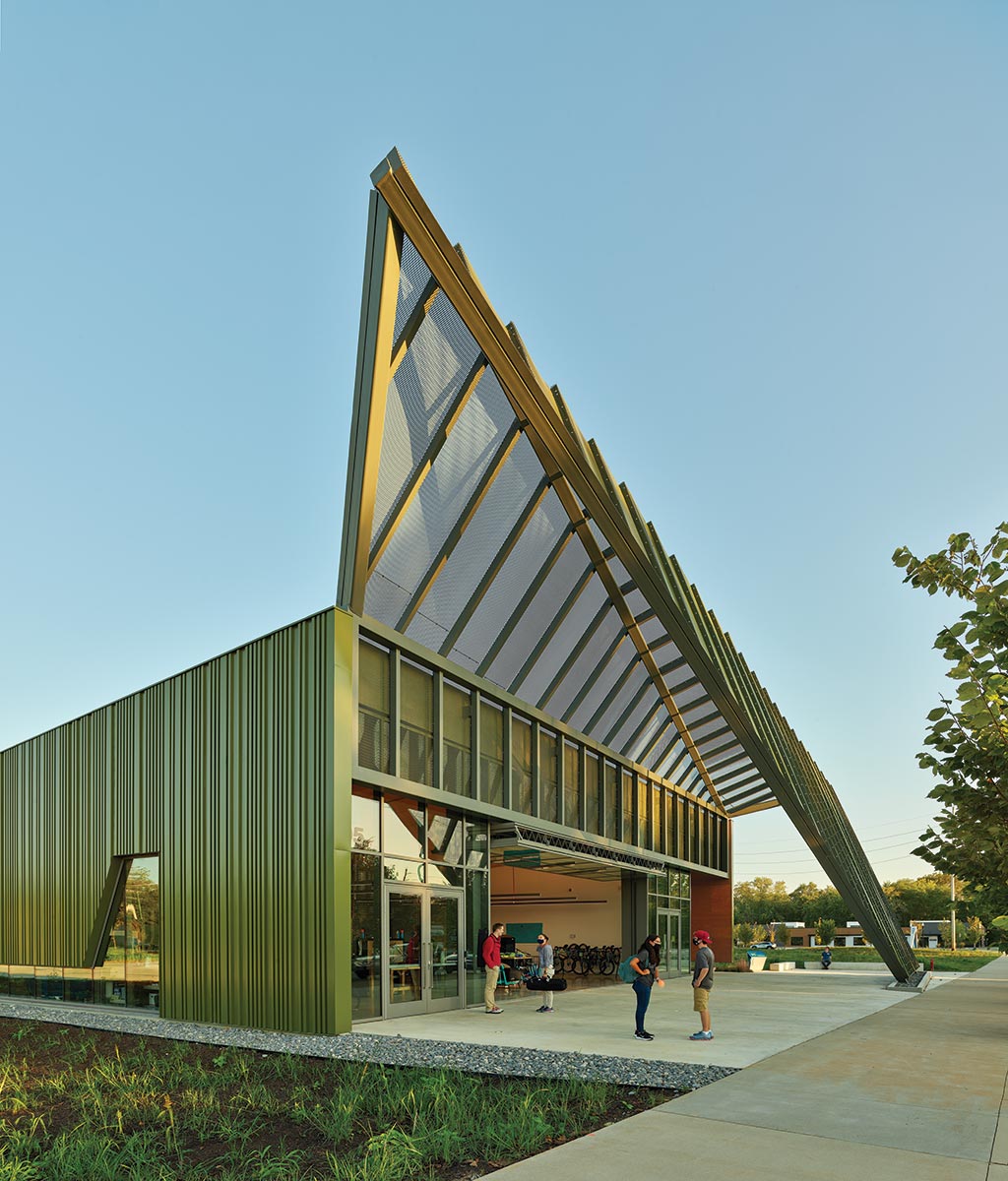 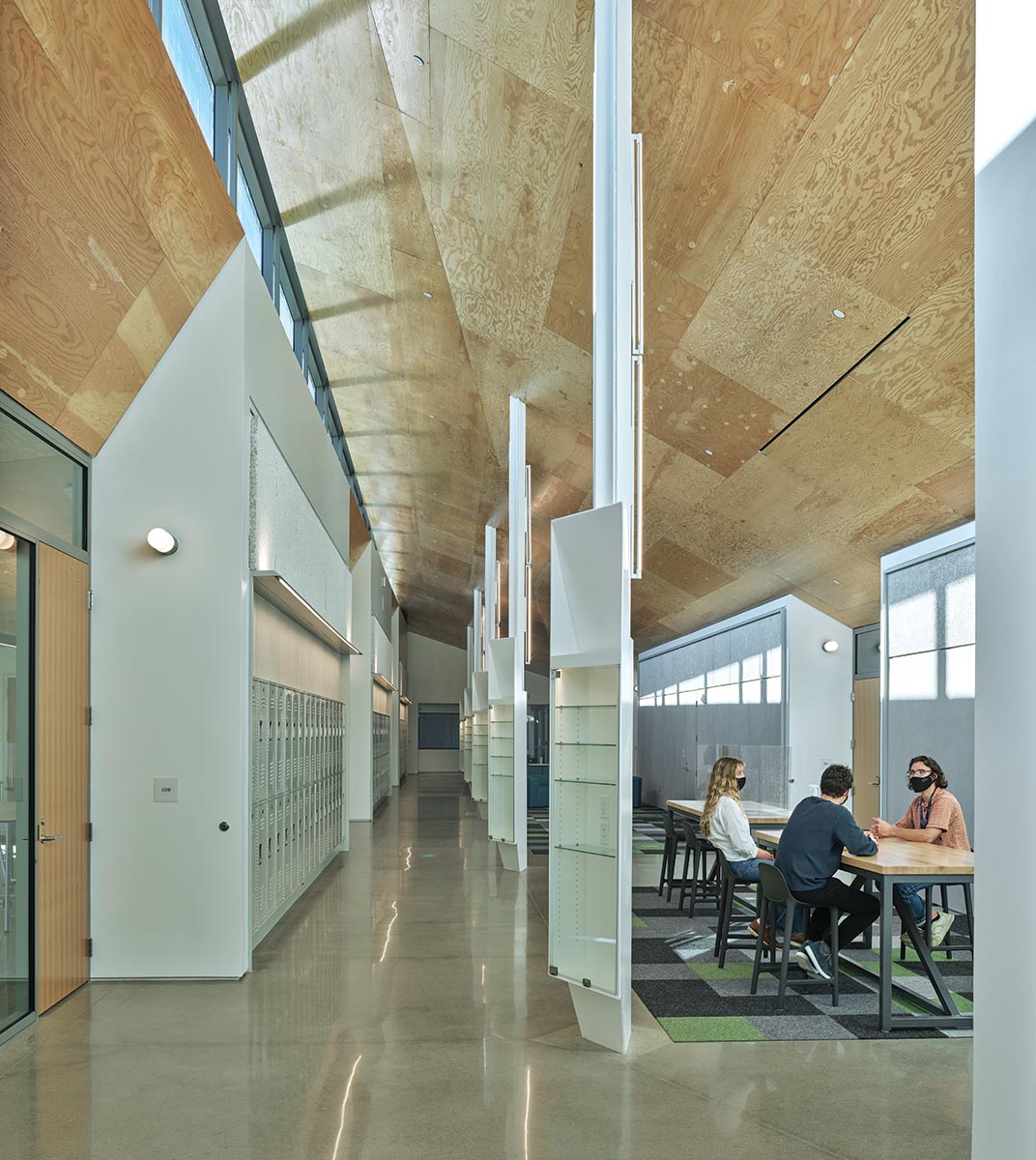 While the two firms’ work shares a formal language, with ground-hugging, vernacular-inspired volumes, they depart in their material use, with MBA working largely with steel structures clad with a box-rib metal panel system and EDR using load-bearing 2-by-6 framing clad in fiber-cement board and batten, with recessed portions lined in cedar. “Carbon and cost” drove the material choices, notes Dumez. Throughout, interiors employ a palette of practical materials, such as plywood and concrete, underscoring the fact that this is a hands-on environment.

The Thaden School hopes to find a learning opportunity in every square inch of its campus—and the designers’ cohesive but distinct approaches have clear didactic merit. No less important, the intrepid architecture and landscape this collaborative team has created can teach the value of risk-taking and ignite imaginations into the future. 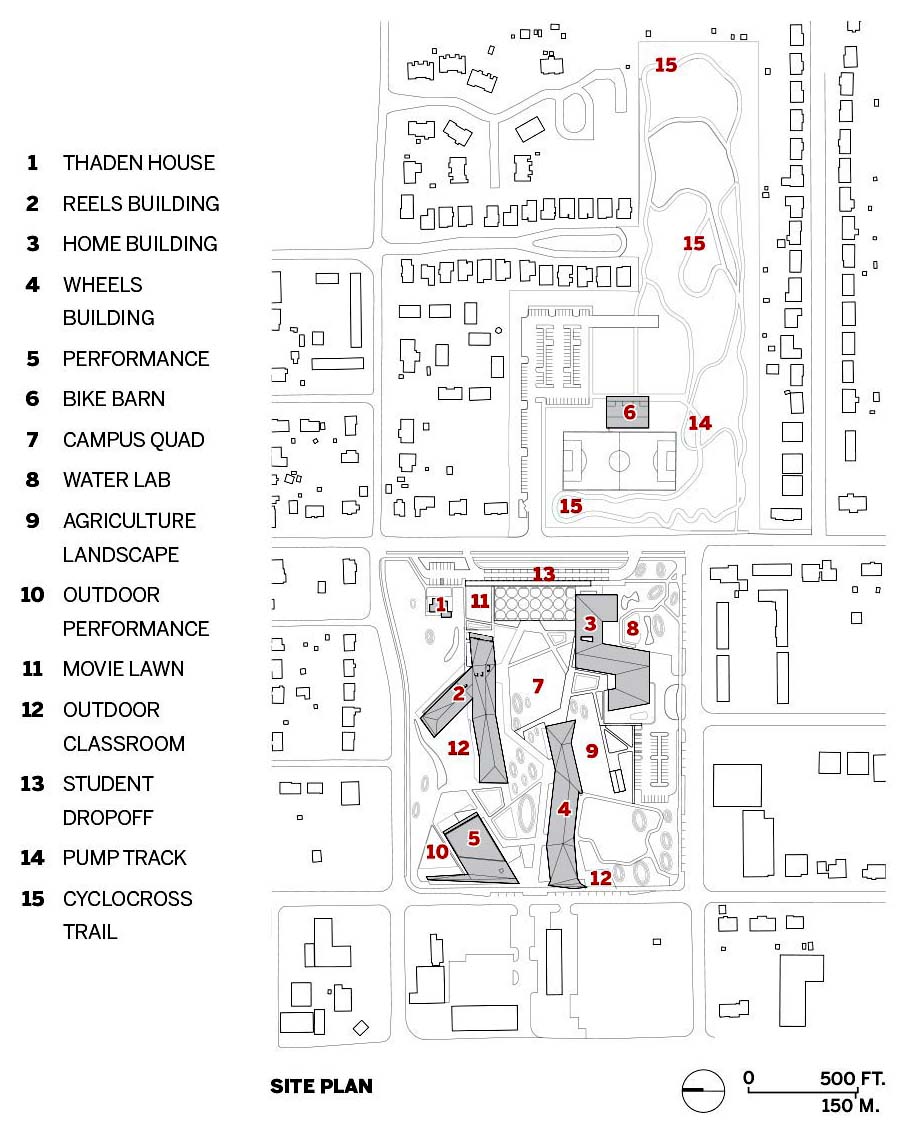