In 1960s France, the combined effects of the post-war baby boom and the extension of compulsory education from 14 to 16 years of age heralded a flurry of school building, often done on the cheap and as rapidly as possible. Over half a century later, many of these structures are deteriorating, while those constructed in steel do not conform to modern-day fire regulations. 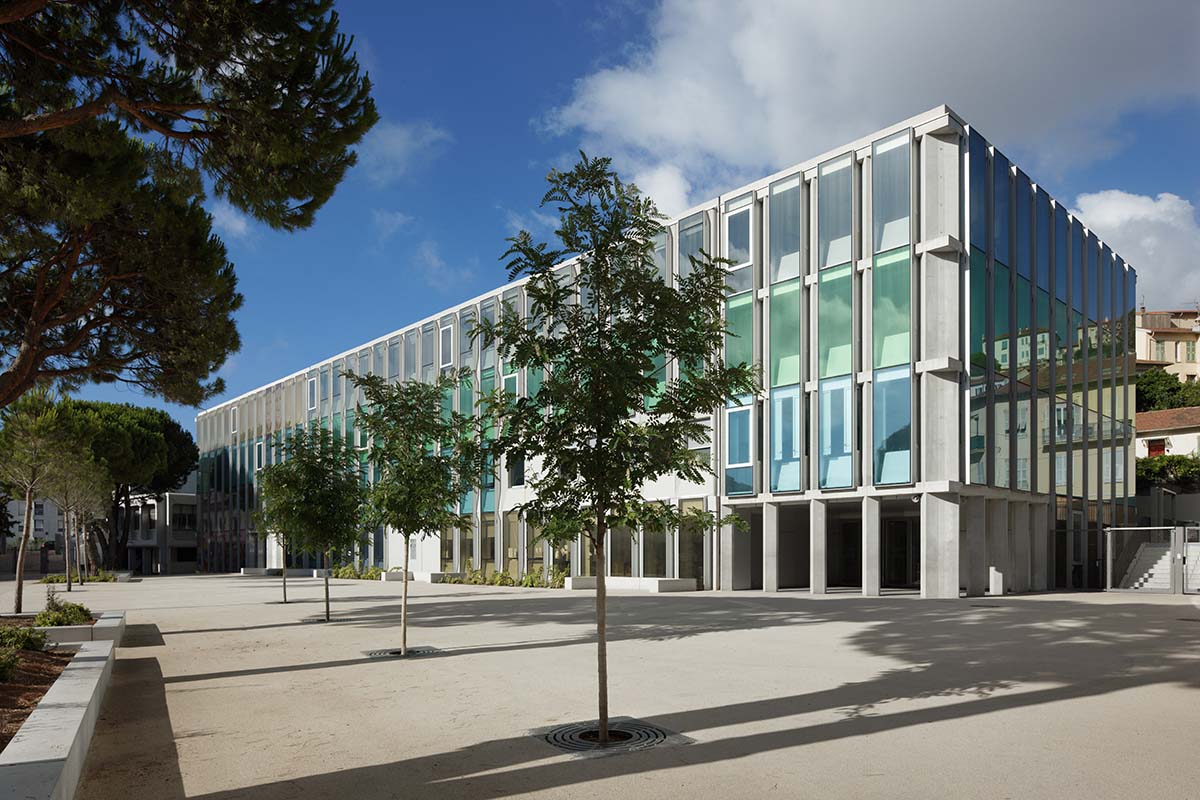 Such was the case at the Collège Simone Veil, a middle school for 700 pupils, ages 11–15, in the Cimiez district of Nice, whose buildings comprised two 1960s structures lined up next to each other, one in steel and the other in concrete. In 2014, the Département des Alpes-Maritimes launched an architectural competition for the school’s modernization, stipulating demolition of the steel structure and its replacement by another building on the opposite side of the site, renovation of the concrete wing, and construction, where the steel building once stood, of a new sports hall (a facility the school previously lacked). 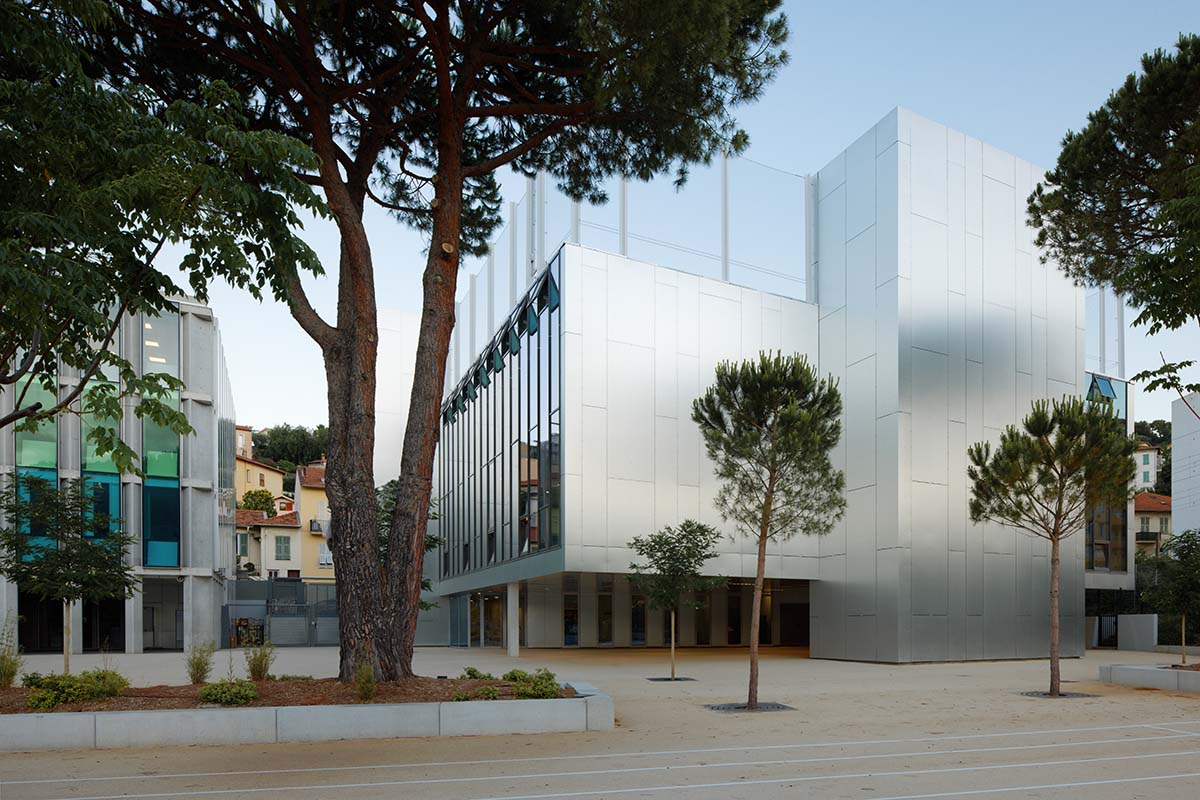 A new school entrance between the two buildings leads from the street down to the courtyard, which extends beneath the brushed-aluminum-clad gym. Photo © Takuji Shimmura

As Pierre-André Comte, of local firm Comte & Vollenweider, explains, “We won the contract by challenging the logic of the competition recommendations.” In their proposal, the architects pivoted the sports hall 90° so it occupied one end of the site and replaced the lost classrooms from the demolished steel block by extending the concrete structure at either end. “In this way,” continues Comte, “we ensured as large a schoolyard as possible, while grouping all the pupils together more efficiently in a single wing.” 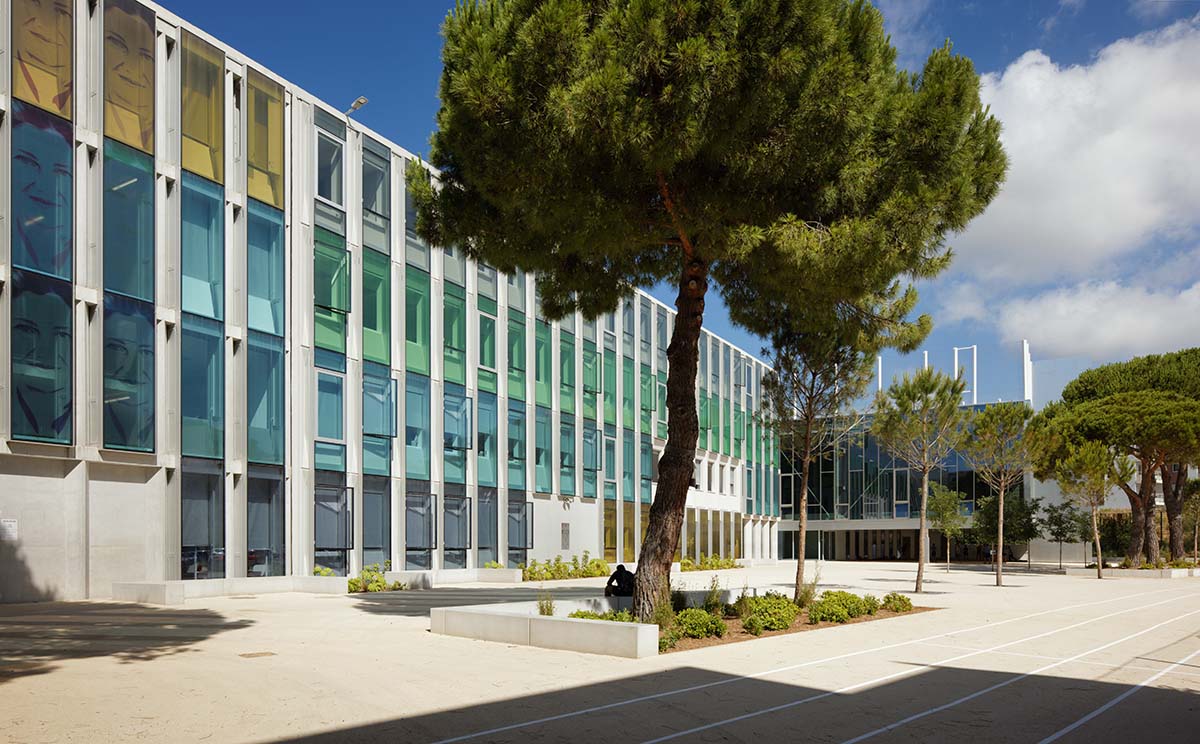 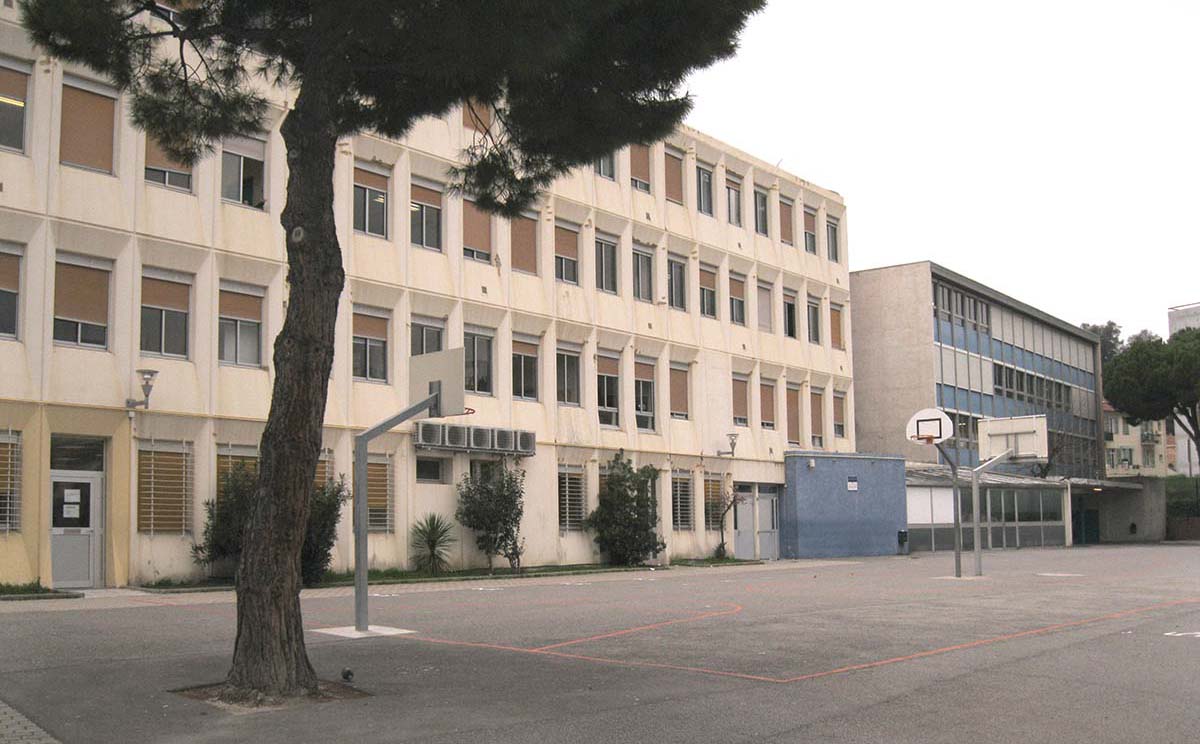 Rotating the gym 90º (1) allowed for additions to each side of the old school (2) and negated the need for a second new building—part of the initial brief. Photos © Takuji Shimmura 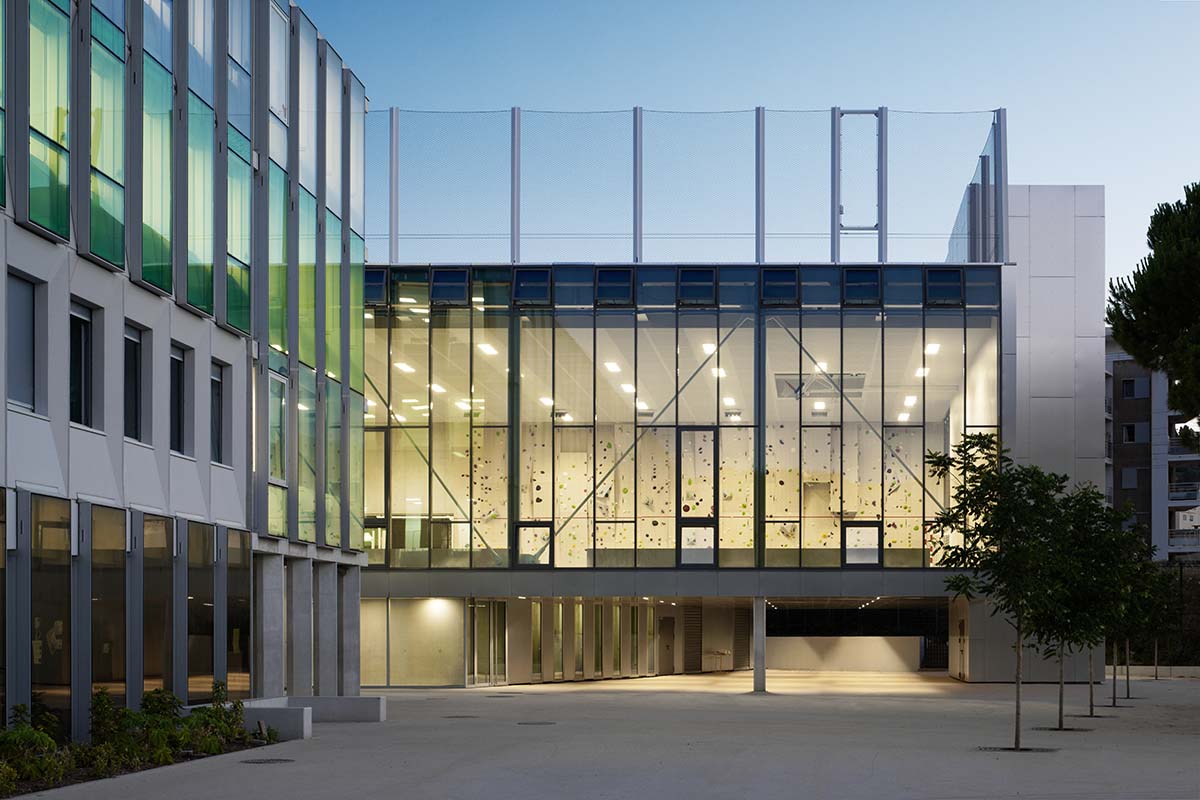 Built using a slab-and-post system, the existing concrete structure featured prefabricated, molded façades, which Comte & Vollenweider initially intended to replicate on the additions. When this proved impossible because of current seismic regulations, they opted to reproduce the bay width of the old building on their extensions – a 5½-foot bay is a useful unit for creating well-proportioned classrooms, says Comte – and to unify the new and old façades with a system of protruding, aluminum glazing frames, one in each bay. “We sought to blur the limits between inside and out by projecting the window frame into space,” explains Comte. Color-coded to indicate different functions (green for areas where there are standard classrooms, orange for IT classes, violet for the library, etc.), the glazing brings a strong visual identity to the institution.

Realized in a similar vocabulary, the sports hall is a minor feat of engineering, suspended above grade so that the schoolyard continues beneath it. (Covered playgrounds for rainy days are a staple at French schools.) Three aluminum-clad concrete towers – two containing stairs, the other equipment storage – carry the giant steel truss that forms the hall proper, which is crowned by a rooftop playing field in synthetic grass. Thanks to high-performance glazing developed by Saint-Gobain, the hall’s sun-exposed southern façade, facing the schoolyard, is entirely transparent. 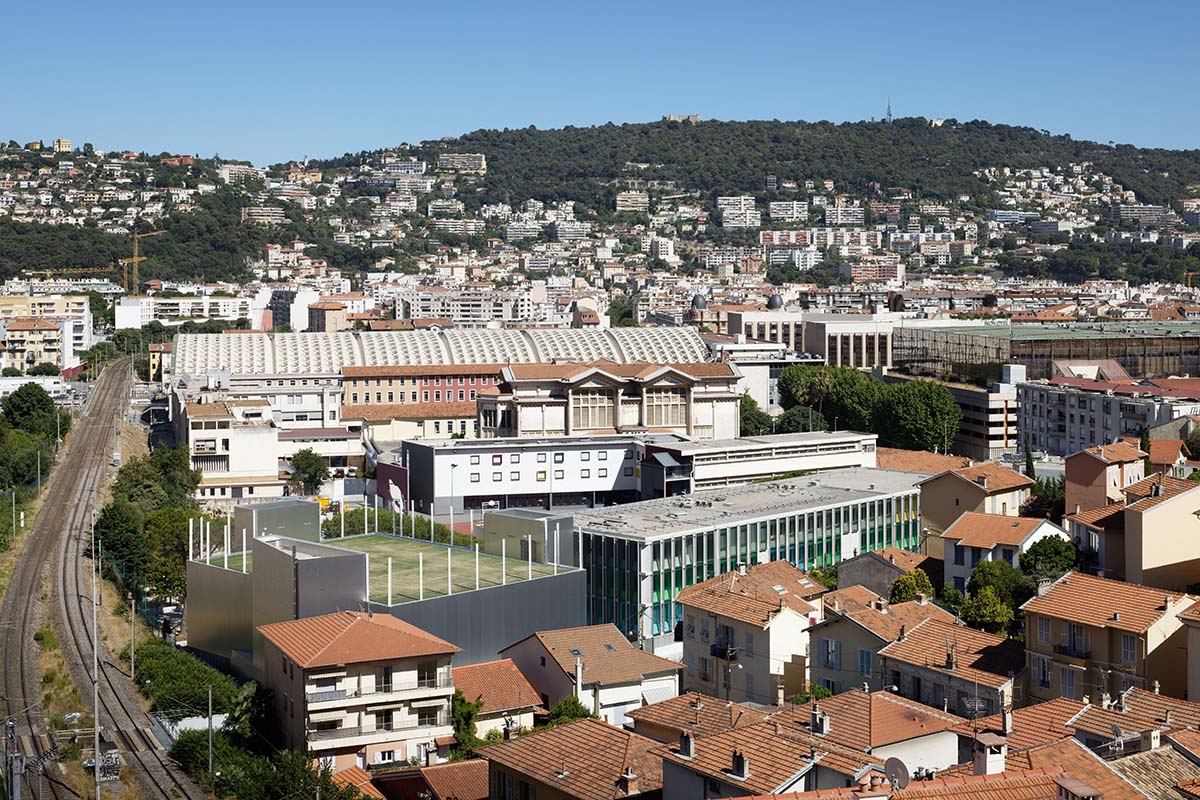 An aerial view reveals a sports roof on top of the gym building. Photo © Takuji Shimmura

Construction was carried out in phases, from February 2016 to December 2020 – the school remained in use throughout –, and included the architects’ remodeling of the yard, which they leveled and resurfaced in a non-heat-absorbing, sand-colored resin material, and planted with numerous new trees that will help reduce the effects of summer heat. In contrast to the shabby old school within a barren yard, Comte & Vollenweider’s transformation, all sparkling glass and aluminum in a verdant setting, is a far more auspicious incarnation of that old saying, “the children are our future.” 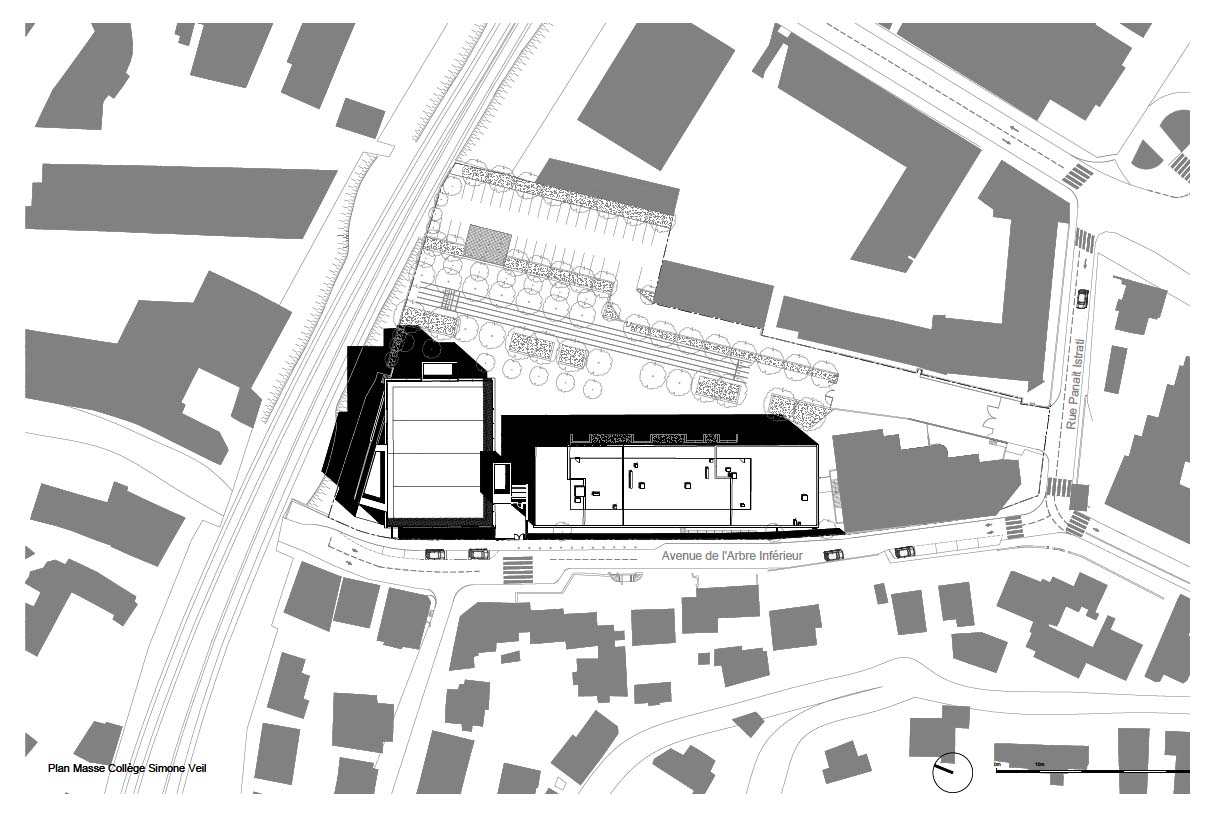 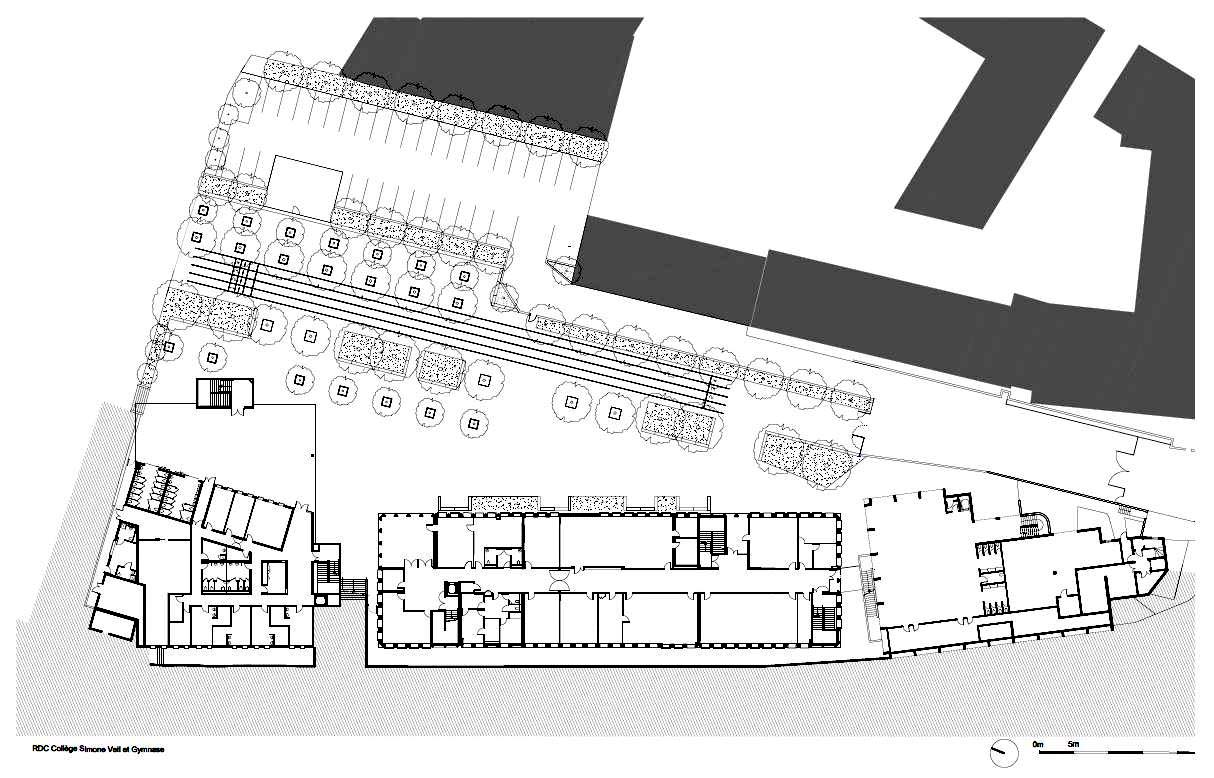 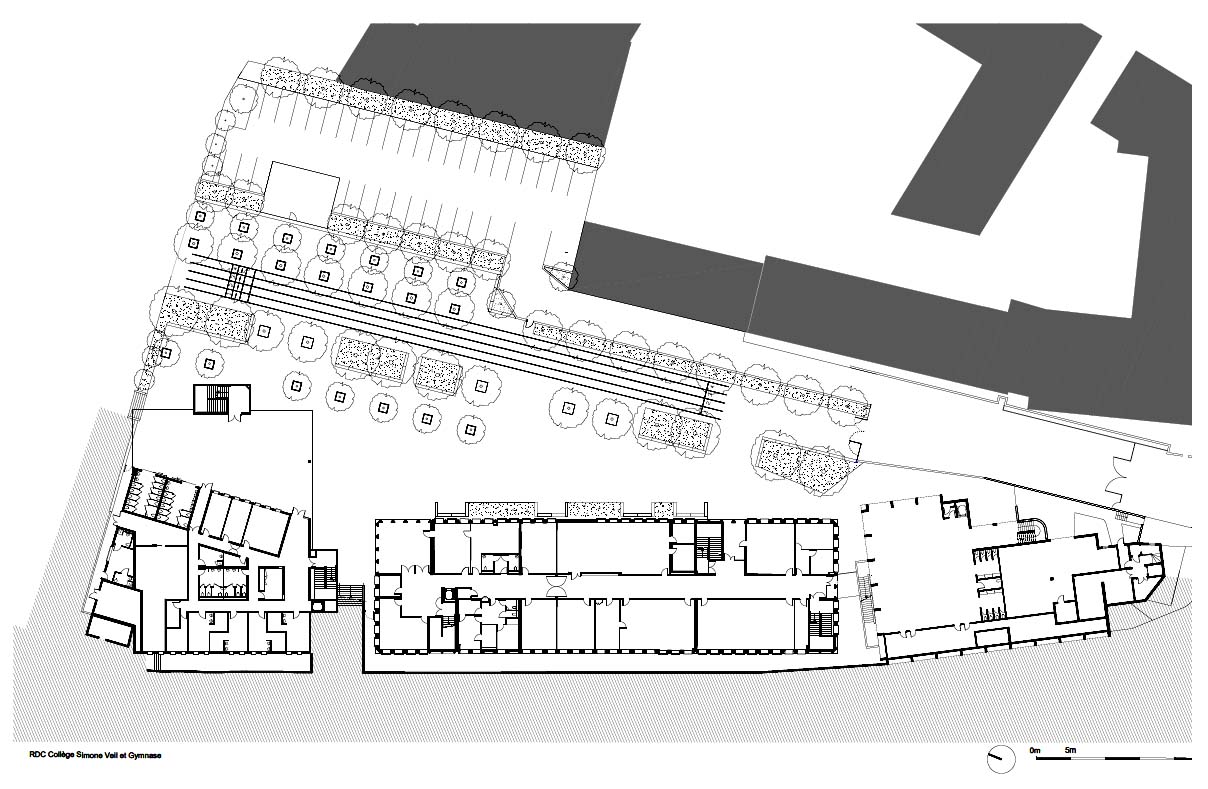