Today, New York City mayor Bill de Blasio signed a building “gas-ban” into law. Starting two years from now, the legislation will begin to phase out on-site fossil-fuel use in new construction. The result, the measure’s advocates say, will be a significant reduction in greenhouse gas emissions. By 2040, it will allow the city to avoid emitting 2.1 million tons of carbon, or the equivalent of the annual emissions of 450,000 cars, according to one analysis.

The law goes into effect for structures shorter than seven stories in January 2024, and for those that are taller in July 2027. It means that new buildings will rely on technologies like induction stovetops for cooking and heat pumps for heating, cooling, and hot water, rather than their gas- or oil-burning counterparts. It makes New York the latest city to join a quickly growing list of cities and towns with electrification requirements. Berkeley, California, was the first to act, prohibiting gas connections to new small and midsize residential buildings in July 2019. Since then, 66 jurisdictions in the U.S.—54 in California alone—have instituted regulations that restrict or discourage gas infrastructure.

Even though New York was not the first to the all-electric party, it is hard to overstate the potential impact of its legislation. As the nation’s most populous city, New York emits more carbon from fossil-fuel use in buildings than 41 states, according to the Rocky Mountain Institute (RMI), a nonprofit whose mission is to accelerate the transition to clean energy. In addition, it is the first major locale in a cold-weather climate to enact such a policy, points out Russell Unger, principal of RMI’s carbon-free buildings team.

Pete Sikora, climate campaigns director for New York Communities for Change, part of a Gas Free NYC coalition that fought for the bill, says its passage should provide the electrification movement with even more momentum. “Gotham has put up a Bat-Signal saying to the entire world, ‘Let’s go!’”

Champions of the measure say its benefits extend beyond reducing carbon emissions. It will also improve air quality. A recent RMI analysis found that burning fossil fuels in buildings in New York resulted in 1,114 premature deaths and $12.5 billion in health impact costs in 2017 (the most recent data available).

Still, the law has its skeptics, including the Real Estate Board of New York (REBNY), which lobbied for a delay in implementation and limits on its scope. REBNY was among those that argued that the policy would be ineffective at lowering planet-warming emissions since the city’s electricity is now generated primarily from burning fossil fuels. (A state law mandates greening of the grid, so that it is 100 percent carbon-free by 2040.) But despite the current status of the grid, electrification will realize near-term emissions reductions, say the legislation’s backers. “Heat pumps are so efficient that they save carbon today, even with New York City’s dirty electricity grid,” said Chris Halfnight, director of policy at the Urban Green Council, a sustainable-building nonprofit, in testimony to the City Council. “There is no carbon-based reason to wait,” he said.

Other opponents, including an association representing plumbing contractors, have questioned the law’s impact on the reliability of the grid. However, supporters maintain that the generation and distribution system has sufficient capacity. In his testimony, Halfnight explained that building electrification would increase power demand primarily in the cold months, for heating. “The grid is built to serve a summer peak that is 40 percent higher than winter, which means the grid is ready for building electrification to start now and we have a long planning horizon for future load growth,” he said. 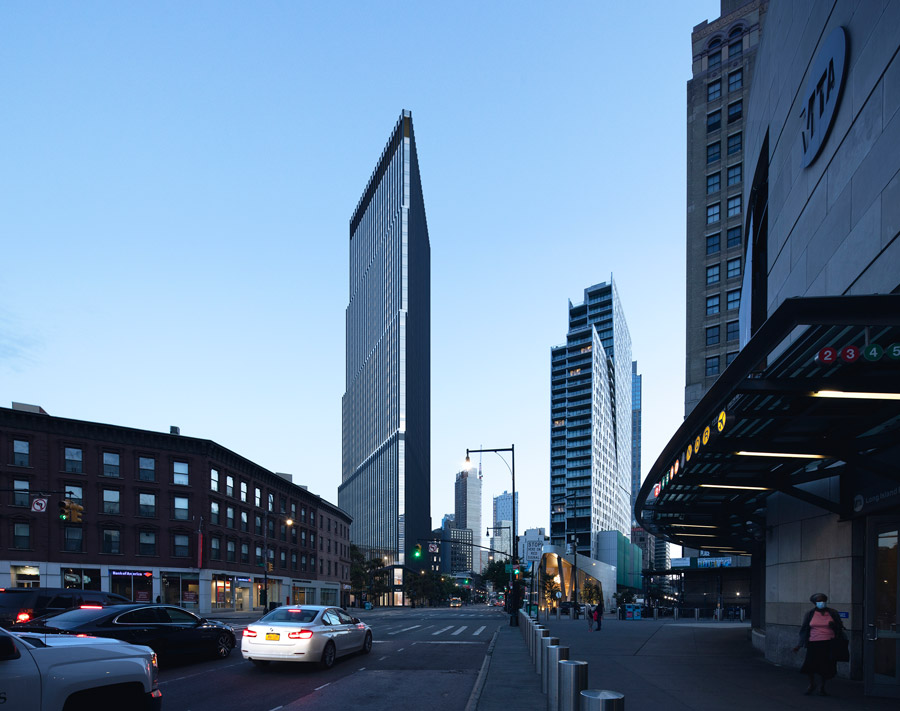 A 44-story residential tower going up in downtown Brooklyn will be the city’s first all-electric residential skyscraper, according to Alloy, its architect and developer. Image courtesy Alloy

Some developers and designers have already started to embrace the electrification trend. Construction began this past summer on a 44-story building in downtown Brooklyn which will be the city’s first all-electric residential skyscraper when completed in 2024, according to Alloy, its architect and developer. AJ Pires, the company’s president, says that the strategy should position the tower well to comply with the city’s Local Law 97—2019 legislation that restricts the amount of carbon buildings can emit, with the limits growing more stringent over time. “We plan to hold onto the building long term,” he says.

Alloy’s tower will contain 445 rental apartments, the majority of which are market-rate (45 have been designated as affordable). But electrification is also taking hold in the nonprofit affordable housing sector. Magnusson Architecture and Planning (MAP) has four such all-electric projects in construction, including the 94-unit Rheingold Senior Residences in Brooklyn’s Bushwick neighborhood. Sara Bayer, a MAP associate principal, says going electric is only marginally more expensive, estimating that the premium for a hot-water system for a building the size of Rheingold is about $300,000. And that is before taking into account any savings from the omitted gas infrastructure or incentives.

Going electric can even save money, according to a recent RMI study. It compared the cost of building a new all-electric single-family house in New York City to that of one relying on gas for cooking, space-heating, and water-heating. The analysis found that the all-electric option offered savings on both capital and operating expenses.

Electrification proponents urge architects and their clients to make the shift sooner rather than later. Alloy’s Pires predicts that fossil-fuel burning in buildings will be obsolete in the not-so-distant future. “Gas lines will go away,” he says, “just as copper telephone wiring has.”