Ricardo Bofill Leví, who died last week at 82, in Barcelona, of Covid-related complications, is best-remembered for his giant, and often controversial, 1970s and 80s housing projects in France, whose overblown concrete classicism came to define an epoch. But during his six-decade career, he made his mark all around the world, from his native Spain to Russia, the US, India, north Africa, and recently China.

Born in Barcelona in 1939, Bofill was a highly successful businessman, entrepreneur, talent spotter, and team leader, the ideal company figurehead who knew exactly how to talk to clients and politicians. These are skills he no doubt learned from his father, an architect and builder who had worked with figures such as José Luis Sert and Antonio Bonet. Bofill consequently “had the advantage of being able to start building very young,” as he recalled in an interview in 2020, looking back on his career. Indeed, he was just 19, and still a student in Geneva (after he had been expelled from Barcelona University for his links to Catalonia’s communist party), when he began his first project, a family home in Ibiza.

In 1963, back in Barcelona, he founded the Taller de Arquitectura (“architecture workshop,” later renamed Ricardo Bofill Taller de Arquitectura) which, as well as designing sophisticated apartment buildings in his native city, began work on an entire neighborhood, Barrio Gaudí at Reus, near Tarragona. Intended as an alternative to the then-ubiquitous “Corbusian” slab blocks that Bofill damned as “living cemeteries,” the project took the form of a three-dimensional puzzle of 2,000 dwellings, accessed by multiple courtyards, walkways, and footbridges, and enlivened with splashes of color à la Barragán. Borrowing from Frank Lloyd Wright, Louis Kahn, Alvar Aalto, Archigram (Peter Hodgkinson, a partner in the Taller, had worked with Ron Herron), and the Japanese Metabolists, Barrio Gaudí was completed in 1968 and heralded a spate of similar projects in Spain, among them the “spiraling plug-in” that is the Castillo de Kafka (Sant Pere de Ribes, 1968) and today’s Instagram favorite, the Muralla Roja (Calpe, 1973). 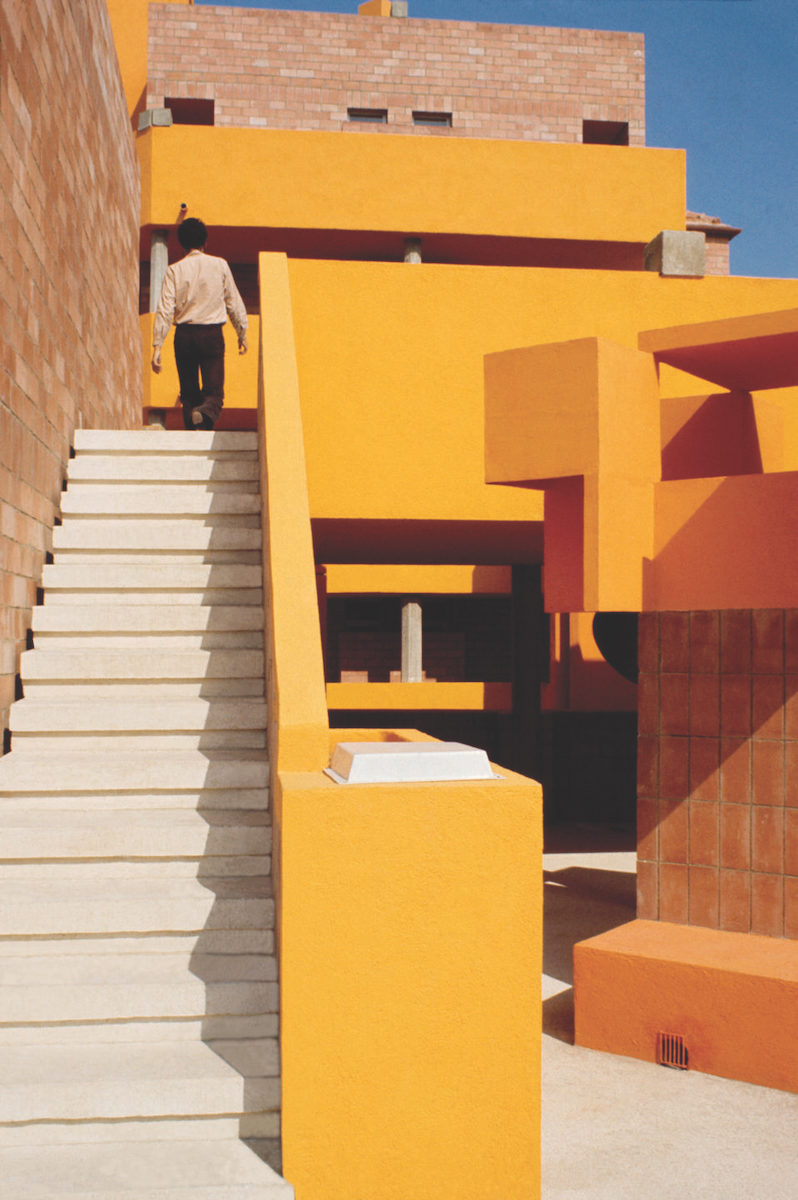 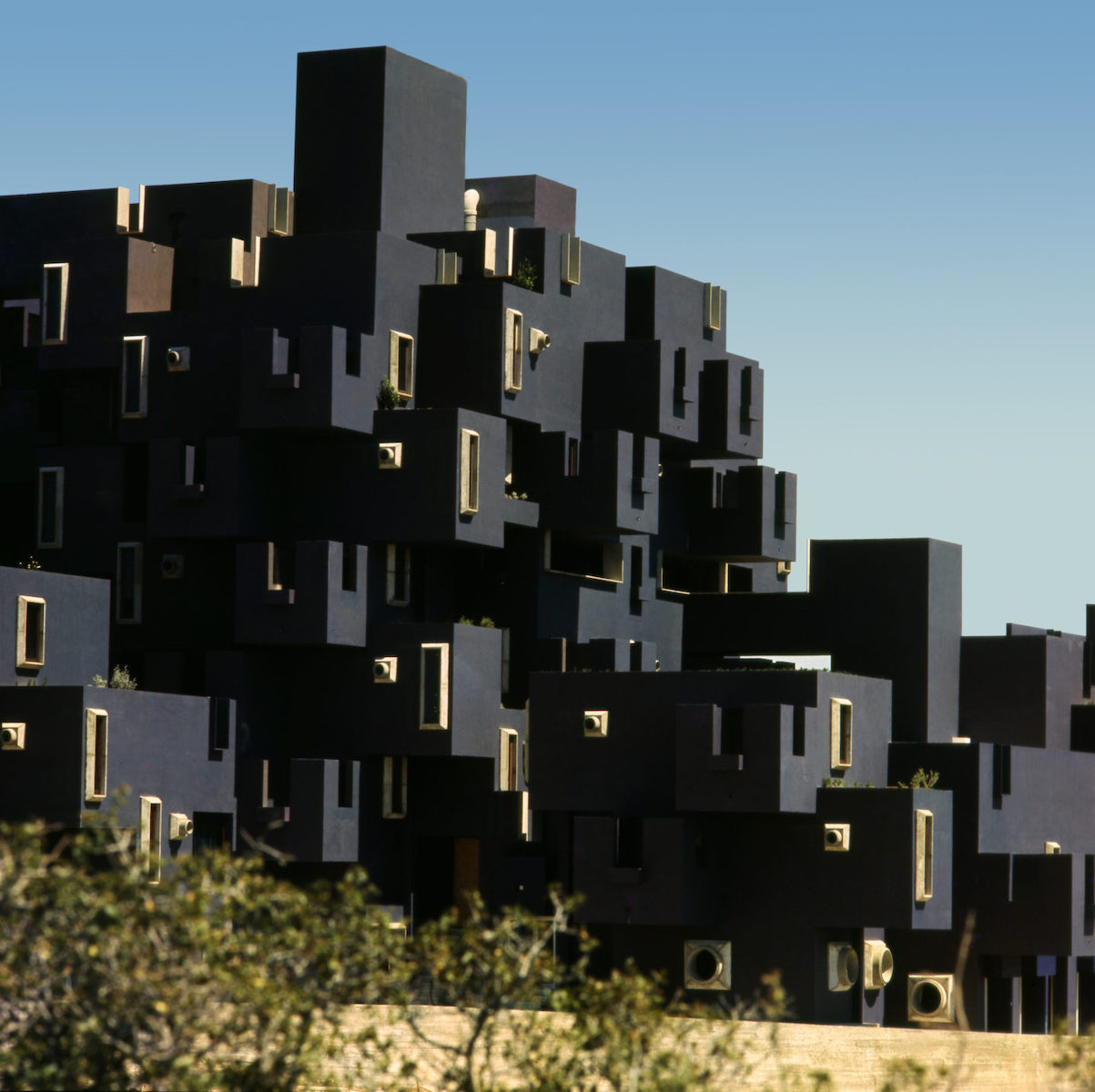 The urbanist’s equivalent of Andy Warhol’s Factory, the 1960s Taller employed not only architects—among them the brilliant Manuel Núñez Yanowsky—but also psychiatrists, philosophers, mathematicians, and poets. “I felt that architecture needed to be opened up to other disciplines,” explained Bofill. This hippy period would turn out to be too much for Francoist Spain: the 1970 City in Space housing ensemble, a “modular system based on the combination of cubic volumes” that the Taller planned for the Madrid suburb of Moratalaz, was stopped by the city’s mayor—at which point, Bofill claims, he was made to understand he could no longer work in the country. One of his best-known projects, Walden 7 (1970–75), a chunk of the City in Space transported to Barcelona’s suburbs, was only finished, he says, because he did it all himself: “I was the architect, developer, and contractor.” Partly inspired by Maghrebi casbahs, it piles up a “mathematical combination” of 30-square-meter (roughly 100-square-feet) modules, over 14 stories, with a view to countering the vagaries of the real-estate market: “The idea was you could join together several modules as needed, horizontally and vertically,” he recalled. Since Marxist doctrine had declared the bourgeois family suspect, it was intended for “new types of families: gays, lesbians, communes, etc. The building attracted transsexuals, drug addicts, singers, unemployed people, writers.” (Bofill’s younger sister Anna, a musician, architect, and militant feminist, was at that time a member of the Taller, and today chairs the condo at Walden 7.) 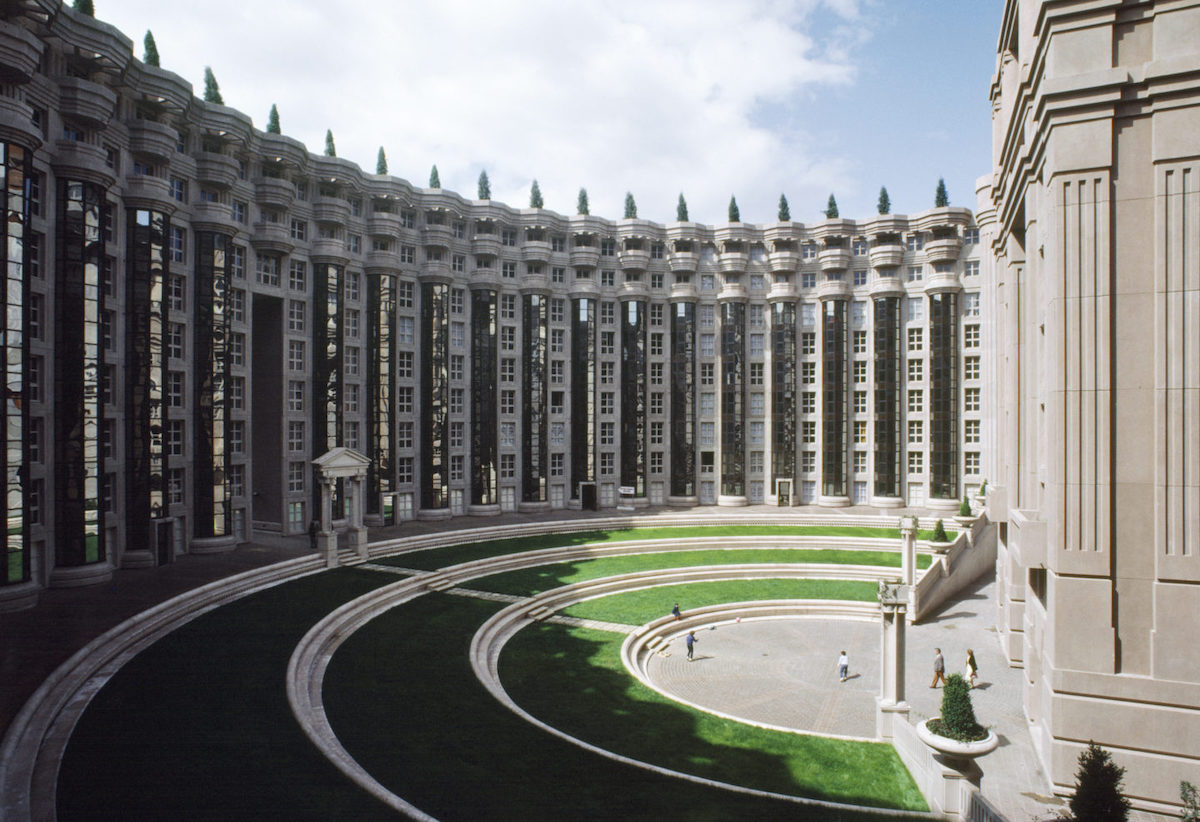 In 1971, faced with official hostility at home, Bofill accepted a fresh challenge in France after “the new-town people came looking for me.” Seeking cues in the genius loci, he initially experimented with French Gothic—the unbuilt Petite Cathédrale (1971) planned for Cergy-Pontoise—before turning to classicism. Asked to build large-scale residential complexes on a social-housing budget, he chose industrial prefabricated-concrete system construction, a French specialty at the time. “For me, prefabrication entailed this sort of modern Classicism: because, when you make a piece that has to be repeated 500 times, it must be characteristic and very well designed. That was what, in the context of a country known for its formal landscape gardens, led us to develop a system of classical geometry.” Out with compact casbahs, in with grandiloquent piazzas and axes inspired as much by Nash and the crescents of Bath or Edinburgh as by the Sun King’s Versailles. At Saint-Quentin-en-Yvelines, Les Arcades du Lac (1972–75)—the original “Versailles for the people”—was followed by Le Viaduc (1978–80), a sort of Chenonceau for the people. Of the Taller’s many French housing projects, the best known is Les Espaces d’Abraxas (Noisy-le-Grand, 1978–83), a thousand-eyed panopticon that has enjoyed a successful screen career as a stand-in for dystopia (The Hunger Games: Mockingjay—Part 2; Brazil). The Surrealist streak in all these schemes, inspired as much by de Chirico as by Escher or Magritte, is summed up in the text written by the Taller to accompany an unbuilt Maison d’Abraxas planned for Saint-Quentin: “The staircase will end at a platform from which one can listen to music by Wagner… or commit suicide if one so desires.” 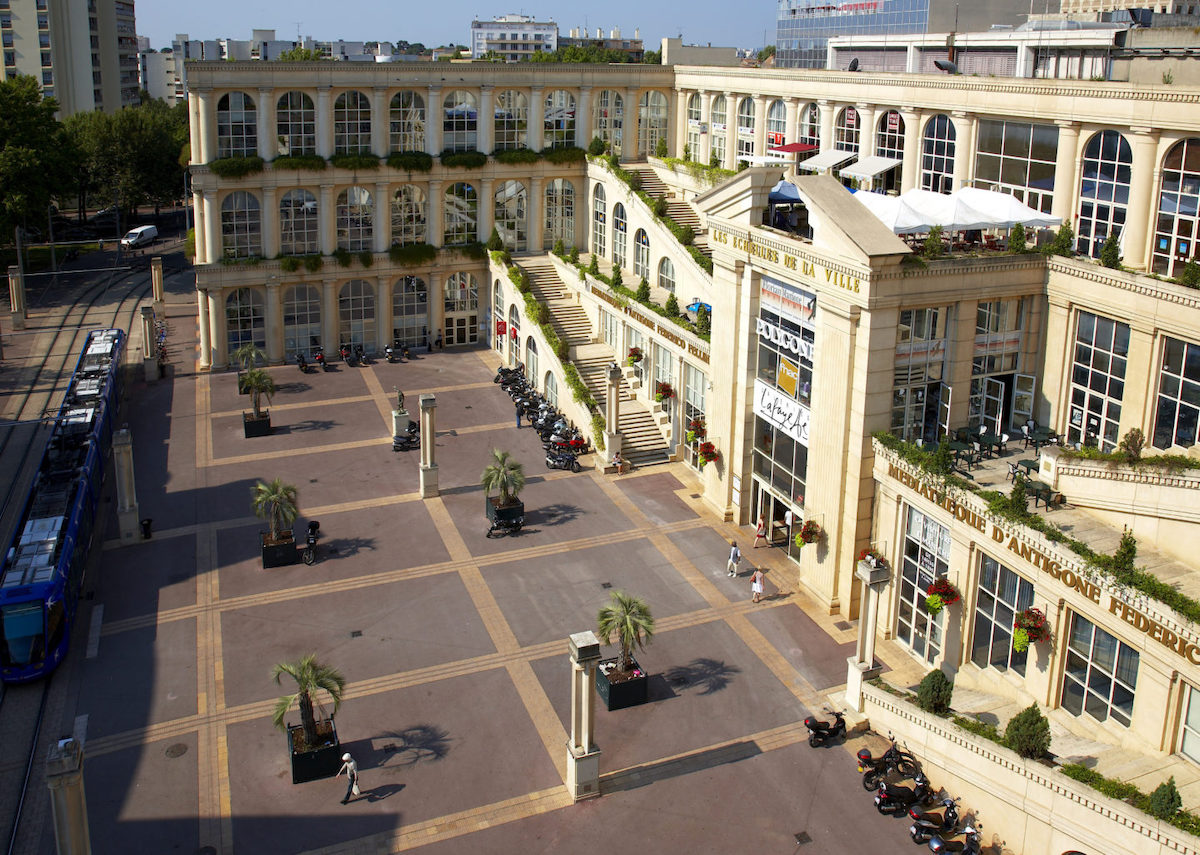 Billed as an alternative to the modernist grands ensembles that had so quickly become ghettos of social decline, Bofill’s French housing projects were arguably a variation on the same theme, though it was not his fault if Gallic planners were still unable to see the problem in building giant satellite-town mega-blocks that did not include the shops and facilities needed to achieve social cohesion. Bofill admitted as much with respect to Noisy-le-Grand, which at one point became a no-go zone for the police (although that was arguably as much due to a lack of maintenance and Noisy’s housing-allocation policy as to the missing aspects of the program). In contrast, Montpellier’s grandiloquent Antigone quarter (1979–99), which features exactly the same “ironic” PoMo inhabited cornices, elephantine staircase-tower columns, and convoluted baroque layout, functions very well as an urban neighborhood, and is appreciated by its inhabitants, since unlike Abraxas it is directly integrated into the city center and includes street-level cafés and other facilities. 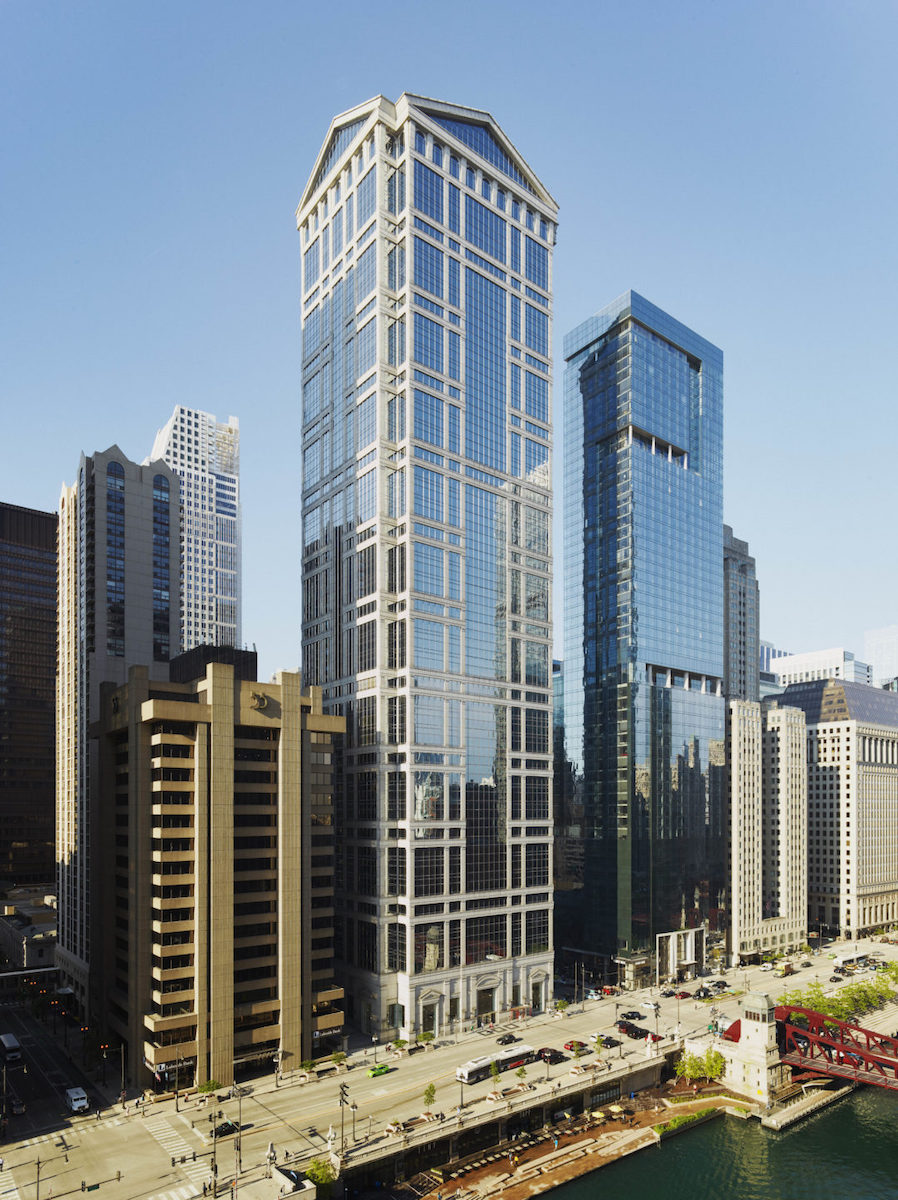 In the late 80s, as France’s appetite for mega-schemes finally waned, and with Núñez Yanowsky and Anna Bofill now gone, the Taller’s work took on a slicker, more commercial turn. Bofill’s classical bent can still be discerned in Chicago’s 77 West Wacker Drive (1992), a glass skyscraper cadenced to the beat of Toontown Doric, or at Paris’s Marché Saint-Honoré office building (1997), a crystalline cross between a Greek temple and a Parisian covered arcade, but it is absent from the twin towers of Luxembourg’s La Porte (2006), the Vegas-style sail that is Barcelona’s Hotel W (2009), or the floating roof of Barcelona Airport’s Terminal 1 (2010). The ochre-concrete Mohamed VI University in Morocco (2016) looks back to the Taller’s casbah phase. Among recent work, urbanism loomed large—for example, in China where Bofill was working on “the city of the future.” He explained that “the Chinese are pretty far ahead with 5G; it’s the technology behind their plans for low-carbon, electric-transport smart cities. But they’ve asked us to make it European-style, with streets and squares, something they don’t know how to do.”

“Each of my projects is a part of an impossible city,” Bofill once declared, a description that also fits La Fábrica (“the factory,” a Warholian name if ever there was one), the extraordinary surrealist castle on the outskirts of Barcelona that he sculpted out of a disused cement plant, bought in 1973. Both his home and the Taller’s headquarters, it is emblematic of a vision that was multiple in its references, at once entrepreneurial and utopian, bourgeois and revolutionary, flashy and refined, and spatially rich but often unsophisticated in its materiality (the fault of the era, he would have argued, as industrialization waxed and craft waned). It was a potent mix, and we will never see anything quite like it again. Architects wield very little power beyond that of persuasion, and though, at its worst, Bofill’s work can be blandly bombastic and/or subservient to base client interests, his best projects are extraordinarily bold and inventive, challenging architectural orthodoxy to further a social agenda. It takes tremendous vision and charisma to make that happen, qualities Bofill clearly possessed in silo loads.