This website requires certain cookies to work and uses other cookies to help you have the best experience. By visiting this website, certain cookies have already been set, which you may delete and block. By closing this message or continuing to use our site, you agree to the use of cookies. Visit our updated privacy and cookie policy to learn more.
Home » For France’s Sciences Po, Moreau Kusunoki Inserts a Glassy Pavilion into a Historic Monastery
Architecture NewsReuse and Renovation

Founded in 1872, the Paris Institute of Political Studies, universally known as Sciences Po, has its historic headquarters on the Left Bank, just off the boulevard Saint-Germain. Since the turn of the millennium, the school—set up to train France’s political elite—has expanded rapidly, adding all sorts of disciplines to the diplomas it awards (law, journalism, business administration, etc.) and opening satellite campuses in the French provinces. As a result of this growth, the school’s Paris premises had to expand too, occupying a number of owned and rented buildings. But in January, the inauguration of a brand-new Paris campus, near its historic home, has allowed the school to shed its rental properties and concentrate research activities and newer diploma programs together on one site.

Sciences Po made the costly decision to remain in the heart of Paris in 2016, when it acquired a 150,000-square-foot former monastery, later occupied by the French army, for €93 million ($106 million in today's dollars); the total cost of creating the new campus, including the €42 million ($48 million) spent on converting the buildings, is estimated at an eyewatering €190 million ($216 million). To secure a fixed price and completion date for the conversion, the school turned to a consortium led by a real-estate developer, selected in a 2018 competition. Headed by Sogelym Dixence, the group included four architects: Paris-based Wilmotte & Associés, a big French firm with a reputation for prestige projects that is led by 73-year-old Jean-Michel Wilmotte; the far smaller Franco-Japanese office Moreau Kusunoki, founded in 2011 by Nicolas Moreau and Hiroko Kusunoki, which achieved international fame in 2015 with its winning design for the never-built Guggenheim Helsinki; heritage specialist Pierre Bortolussi; and the U.S.-based Sasaki Associates, who left the project before construction began. All four firms drew up the master plan together; when it came to the architectural design phase, Wilmotte oversaw conversion of the existing buildings, Moreau Kusunoki designed the new interventions, and Bortolussi supervised restoration of the façades and other historic features. “As well as an established firm like Wilmotte, Sogelym wanted a young office,” says Moreau. “We were there to give some extra stimulation.” 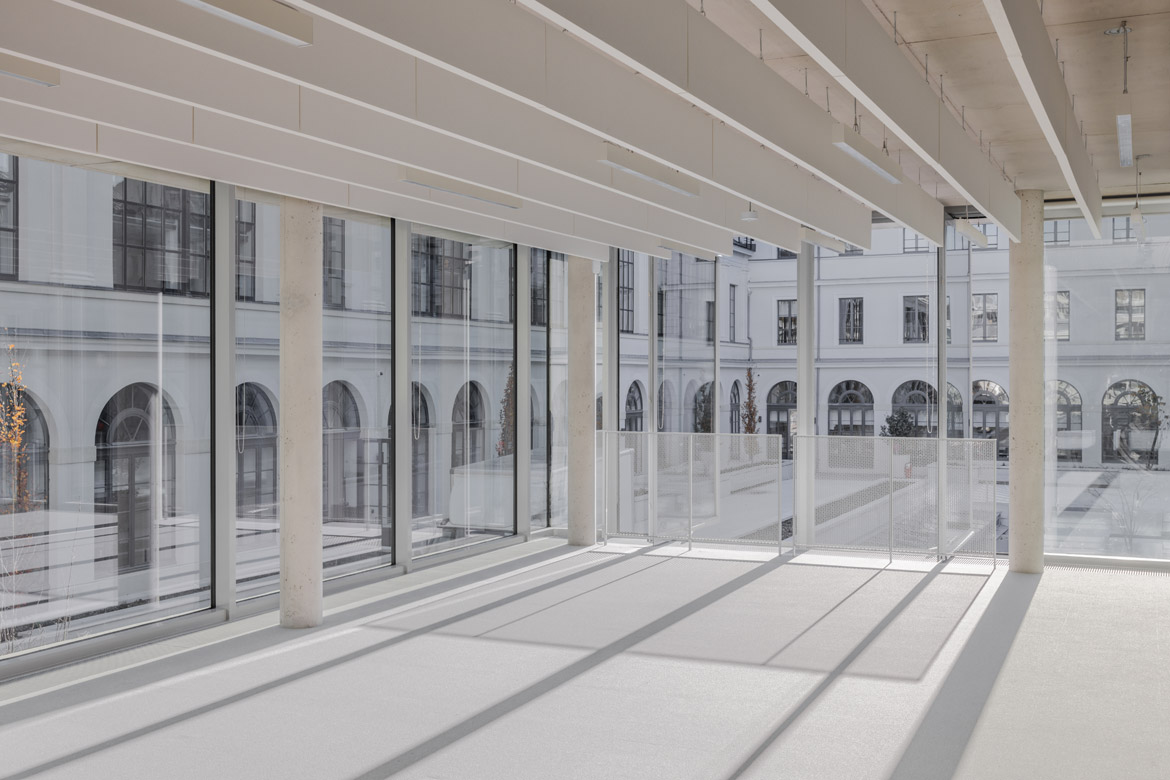 Built for the most part between 1682 and 1740, the former Dominican monastery of Saint-Thomas-d’Aquin, whose handsome baroque church still stands next to the campus, is an austere group of buildings organized around three courtyards. Hidden in the middle of a city block, the campus has barely any street frontage and just one entrance, though it backs onto another Sciences Po property on the rue de l’Université, to which the architects have created a link by cutting openings through the party wall. “One of the problems posed by the brief was that the program is very dense,” explains Kusunoki. “This meant we had to excavate the courtyards to get the extra square meters we needed, with trenches that bring in daylight.”

After entering from the street, visitors pass into the first courtyard, which, after years of mistreatment by the army, now looks much as the monks would have known it in the 1680s. Its buildings contain offices for researchers and staff, as do those of the second courtyard to the northeast, where the school of journalism can be found buried below grade and lit from a narrow, sunken patio. Though the historic façades have been beautifully restored, with charming details such as cloister lanterns suspended from ropes (this traditional technique eliminated the need to run electrical conduits through the stonework), the severe, classical image these courtyards project was perhaps not entirely what was wanted for an elite school aiming its ambitions squarely at the future. It was therefore in the third and largest courtyard that Moreau Kusunoki looked to bring a little “stimulation” to the ensemble.

Strangely enough, the program for the campus did not include a lecture hall, a typology Moreau Kusunoki chose to reference outdoors: planted with greenery and descending below grade to bring daylight to the campus library and IT center, a giant set of stone bleachers provides outdoor lunchtime seating. At the far end of this sunken court, like the scaenae frons of a Roman theater, rise the four stories of a little glass pavilion in which all the symbolic reach of Sciences Po’s new home is concentrated. “This was the only place the planners would let us build anything new above grade,” explains Moreau, since the entire site is landmarked. 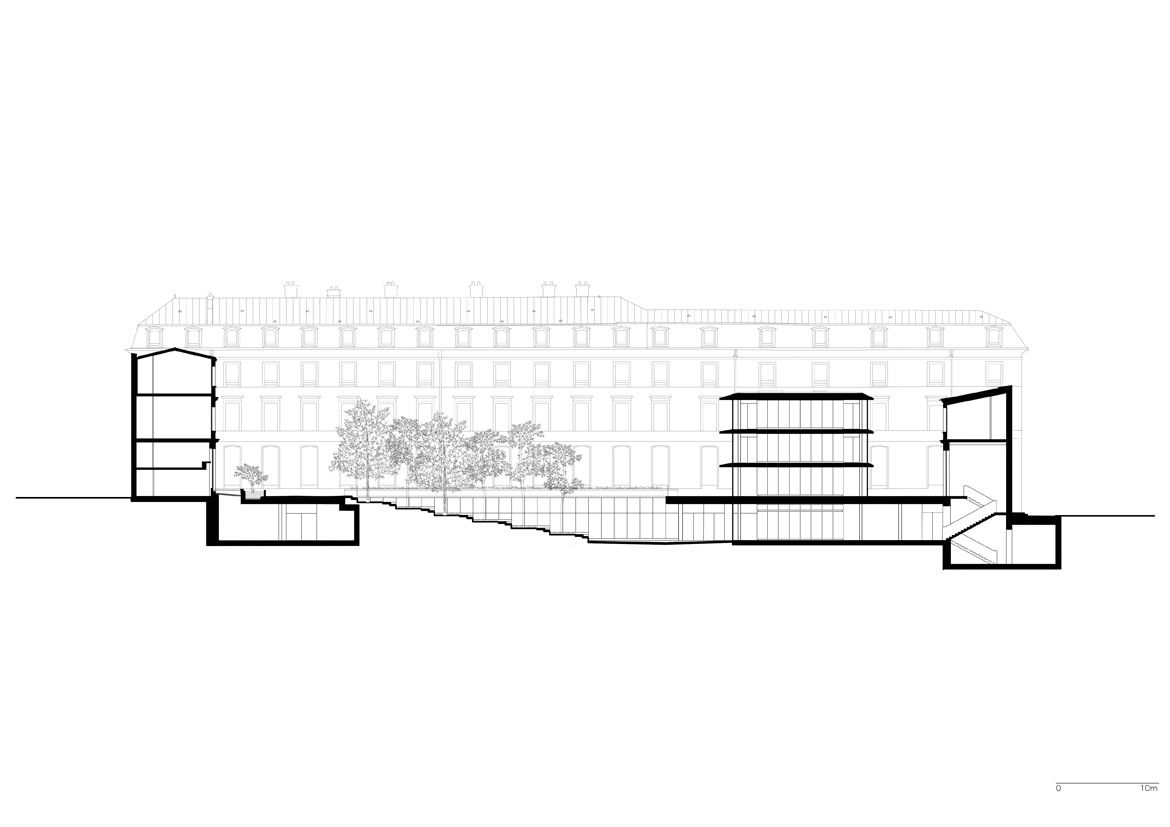 Section through the Cour Gribeauval (the main courtyard), with the Pavillon de l'Innovation towards the right. Image © Moreau Kusunoki

Baptized the Pavillon de l’Innovation, the structure houses the campus cafeteria on its lower level and Sciences Po’s entrepreneurship department above. As Maxime Marzin, the department’s director, explains, “The pavilion’s mission is to effect a transfer of academic research to the outside world via strategic partnerships. It’s a sort of showroom to host meetings and events.” Intended as a bravura piece of transparent minimalism à la japonaise, the building consists of thin concrete floors beveled at the edges and cantilevered out from a concrete core containing stairs and elevators, with wraparound floor-to-ceiling glazing set back from the perimeter in front of a row of anorexically slender concrete columns.

“Look,” says Moreau, playing with the giant motorized pivoting windows that were specially developed for the project. “Imagine this in summer, it’s just like a Japanese garden pavilion.” But, as he and Kusunoki are the first to admit, the context made it impossible to do things the Japanese way: “Sciences Po bled themselves dry to buy the site,” says Moreau, “which meant that cash was very tight for the conversion work.” In addition, under the terms of their contract with Sogelym, Moreau Kusunoki had little control over how the pavilion was built. While they managed to avoid the worst of the value engineering the developer tried to impose, they had to accept reduction of the pivoting bays to just 60 percent of the main façade (where before they had imagined all four elevations opening entirely up), and were unable to include detailing that meets the standards such a minimalist approach requires. (Indeed, cheap, clunky detailing is to be found everywhere on the campus.) But then, for the corporate mentality of an institution like Sciences Po, it was never about kodawari—the uncompromising and relentless pursuit of perfection—but rather creating a media-friendly backdrop that would look good in Instagram reels. Screw up your eyes and the illusion pretty much convinces. 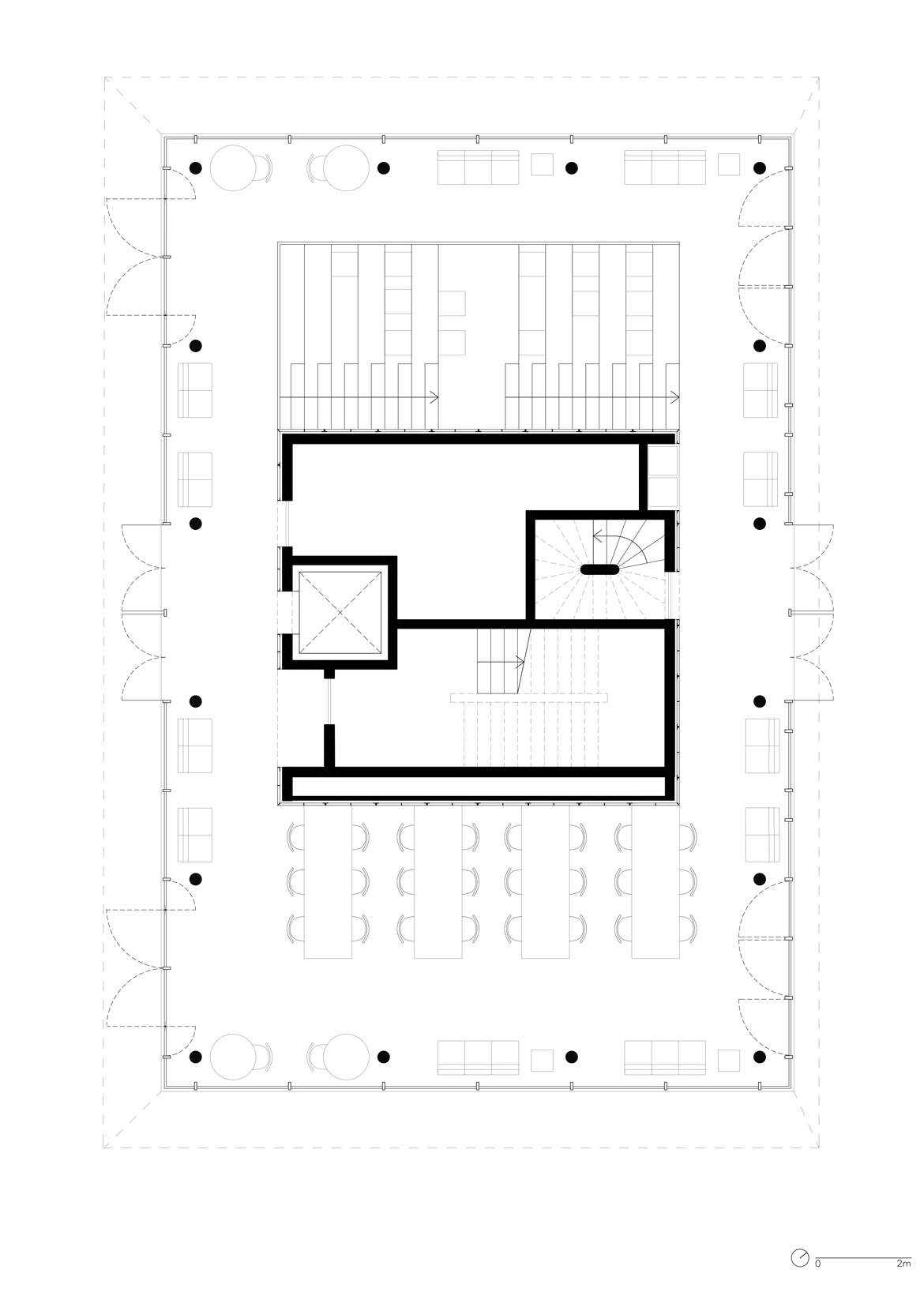 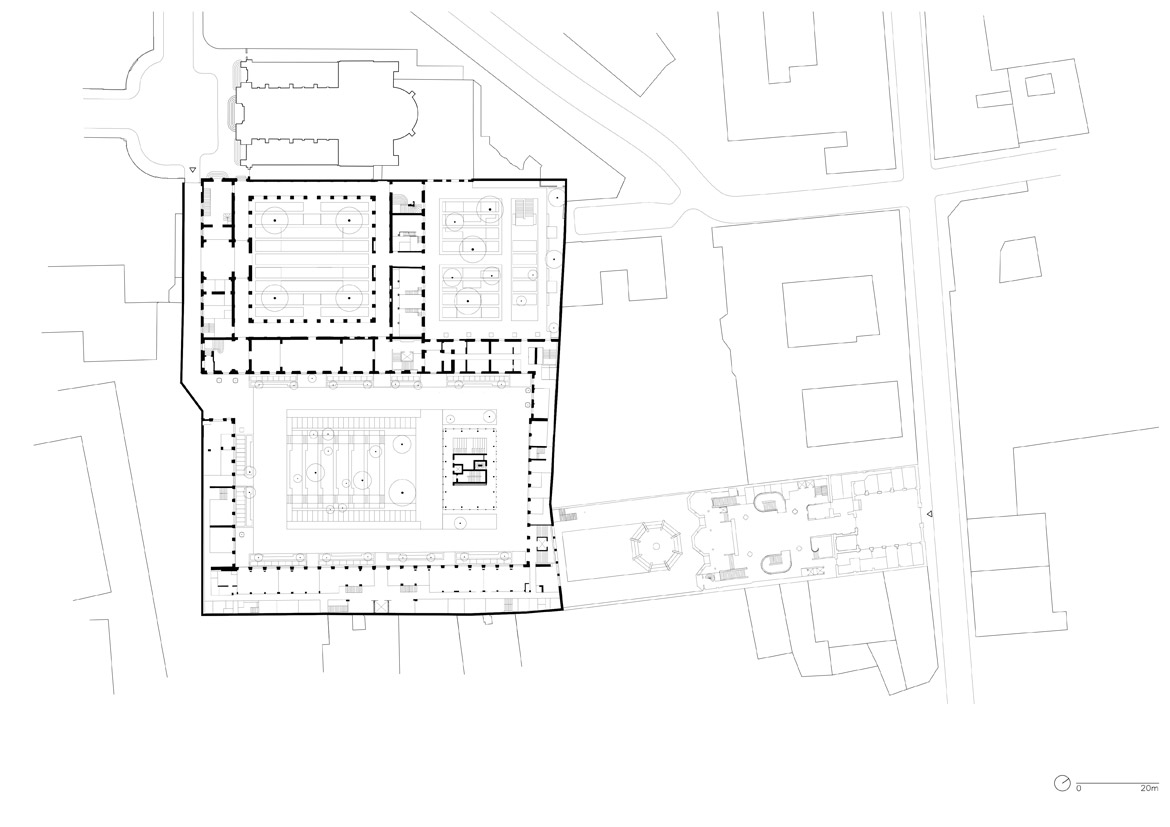