When Tokyo-based architect and Pritzker Prize laureate Shigeru Ban left Japan for a quick trip to the United States in early March, little did he know that only days later he’d wind up in Poland. But with waves of Ukrainian refugees fleeing their homeland, the veteran relief worker couldn’t just stand by and watch. Understanding that adding temporary partitions to the emergency shelters was one way to offer immediate help, the architect called on colleagues and students in Warsaw and Wrocław who laid the groundwork with local authorities and donors. And then they got the job done before Ban’s plane even landed on Polish soil.

Working at breakneck speed, the team of 20 students built and installed the Japanese designer’s Paper Partition System (PPS) in shelters in the Wrocław Main Railway Station and a now-defunct Tesco supermarket in Chełm, one of the first stops across the Ukrainian border. Set up for refugees who stay for a few days before moving to other parts of Poland and points beyond, the shelters are well equipped, with toilets, showers, kitchens, and children’s play areas. But Ban knew the PPS could improve these conditions by dividing the vast sleeping areas and providing a modicum of privacy. 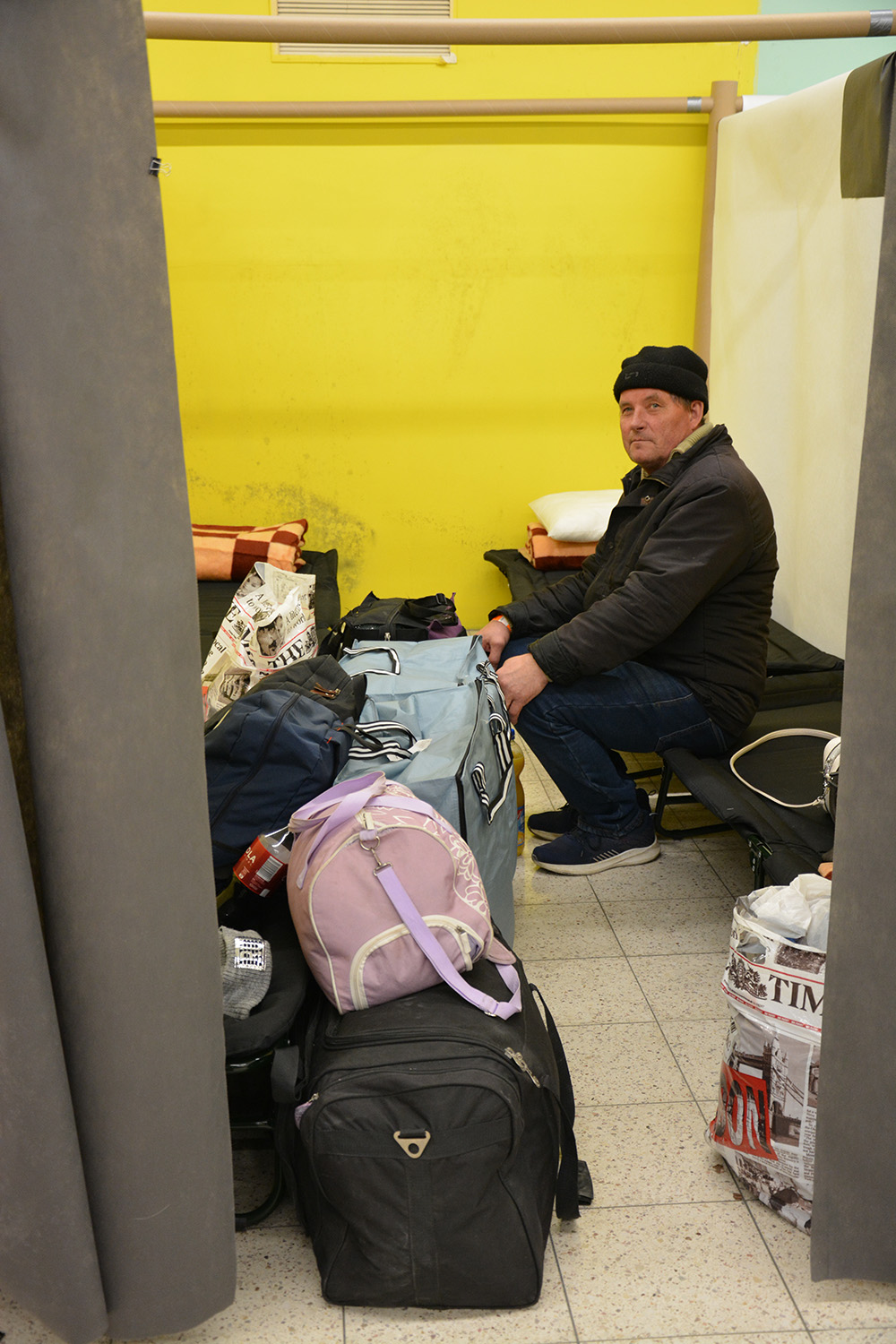 A Ukrainian refugee at the supermarket in Chełm. Photo by Jerzy Latka, courtesy Shigeru Ban Architects

Guided by an instruction manual sent from Tokyo, the students created the PPS components for 60 units in Wrocław and 320 in Chełm. Intended to accommodate one family apiece, each unit consists of four columns, four beams and sheets of colorful cloth—materials donated by Polish paper tube and fabric companies. “They stopped their regular production to make the tubes for us,” says Ban.

Working at school, the students cut holes in the tubes’ tops and safety-pinned the cloth to create the curtains’ horizontal top seams. Once on site, the pieces went together like Tinker Toys. While ordinary binder clips close the curtains vertically, their two-meter height is thought to help control the spread of Covid-19, an ongoing concern since masks and PCR tests are not provided at the shelters.

The fourth iteration of Ban’s PPS, this construction method was first used at the emergency centers in Japan after the earthquake and tsunami decimated the Tohoku region on March 11, 2011. The only difference is the dimension of the beams: “The length of a folding bed is bigger than a futon,” explains Ban. But the initial PPS idea traced back to the 1995 Great Hanshin Earthquake in Kobe, when Ban first became aware of the paucity of privacy inside the evacuation centers. In 2004, after another earthquake struck Niigata Prefecture, Ban got his first chance to address the problem by building a partition system with paper honeycomb. “It was like a house,” says Ban. 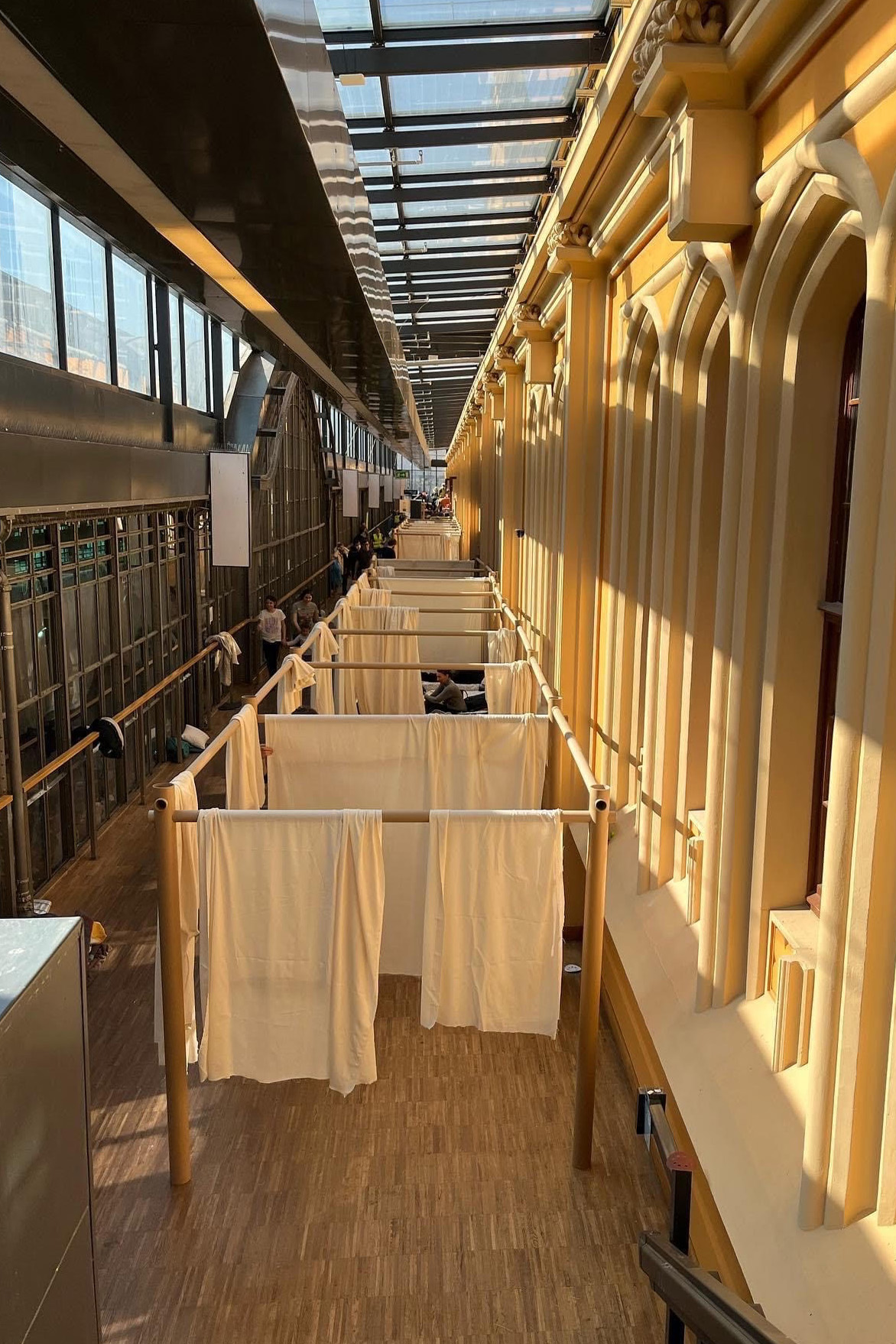 In response to a request for a more open, flexible system, Ban began using curtains. “Every time we simply adjust to meet the needs of the victims and authorities,” he explains. After years of negotiation, the Japanese government finally accepted the PPS as a standard in 2019 and has started to stockpile the units in anticipation of the inevitable next catastrophe. “If I have to convince the authorities after a disaster, it is too late,” says Ban.

But where the crisis in Eastern Europe is concerned, the architect has his work cut out for him. More PPS units are now being planned for multiple locations in Poland, Slovenia, western Ukraine and Paris, where two gymnasiums are being converted into refugee shelters. Ban’s firm is also now accepting donations to fund the additional PPS deployments.

“Unfortunately, the situation in the Ukraine has not been resolved, so I may have to keep doing this,” Ban says.