This website requires certain cookies to work and uses other cookies to help you have the best experience. By visiting this website, certain cookies have already been set, which you may delete and block. By closing this message or continuing to use our site, you agree to the use of cookies. Visit our updated privacy and cookie policy to learn more.
Home » The Gardens of Mount Curve, a 1964 Record House, Reimagined by Coen+Partners
ProjectsBuildings by TypeLandscape ArchitectureResidential Architecture

The Gardens of Mount Curve, a 1964 Record House, Reimagined by Coen+Partners

In a residential neighborhood of Minneapolis, the lush emerald foliage of a renovated landscape starkly contrasts with the gray-scale orthogonal lines of the Mount Curve residence—an understated Midcentury Modern structure featured as a Record House in 1964 (see below).

The overhaul of the 1.5-acre site was undertaken by Minneapolis-based landscape architecture and urbanism firm Coen+Partners following a 2017 competition to re-envision the house (MSR Design renovated the house) and its surroundings, for a client who is an art collector and author. With their intervention, the designers aimed to create a continuous flow between indoor and outdoor spaces, restore the site’s original symmetry, and diversify plant life while showcasing the owner’s sculpture collection. By reconfiguring exterior courtyards, the team also endeavored to ensure safe, level surfaces for aging in place and future accessibility concerns.

Constructed in 1963, the house was designed by architects Bliss and Campbell (with landscape architect Edmund Phelps) for one Mrs. John S. Dalrymple, “a woman active in social and cultural affairs [who] wanted a house which would provide her with a creative environment in which to begin a new pattern of life,” in the words of our 1964 issue. The “one-story scheme with privacy and spatial interest” sat on “a long, narrow lot between two existing houses . . . that sloped steeply downwards to the northern end, with a northeast view over the town.” The site included “a series of receding ‘garden walls’ defining spaces, creating courts and giving privacy from the street.”

The original backyard contained only one small patio off the living room, with all other outdoor space at a lower grade, eventually crowded by overgrown plants. “We came up with the strategy of leveling up the site by bringing a plinth around the entire back side of the house to enable free circulation,” says Coen+Partners’ design director, Wanjing Ji. The team then added a reading terrace and a garden off two of the bedrooms. A gravel-lined courtyard flowing from the dining room is shaded by the canopy of four honey locust trees, while a lower courtyard off the living room is reached via a cantilevered stair that, says Ji, gives “a sense of floating.” In conceptualizing the scheme, the team was inspired by Richard Neutra’s work in California, Ji notes: “We brought the programs outdoors to echo the Midcentury Modern fluent circulation and seamless adjacency of the indoors and outdoors.”

With their approach, the team sought to reestablish a sense of juxtaposition and symmetry by complementing man-made structures with natural elements. Edmund Phelps’s original 1960s landscape plan responded to several existing elm trees to help delineate outdoor space; however, “that composition was gone when we got the project,” explains Ji. (In the 1990s, the disease-ridden elms were removed.) “One of the first strategies was to rebuild the linear elements of the entry,” she says. “The historic photo shows the verticality of the four trees leading to and playing with the horizontality of the house.” The designers reinstated this component, adding a dozen blue beech trees within low metal planters.

In addition to boxwood and arborvitae screens, and the owner’s vegetable garden, the grounds incorporate a mix of species to infuse vibrancy and extend the blooming season. “Different seasons have different colors,” says Ji, a proposition enabled by hydrangeas, tulips, irises, anemones, ferns, peonies, snakeroot, and serviceberry trees. The designers also looked to the Midcentury Modern finishes for inspiration. “We carefully selected the materials, so that they looked seamless,” says Ji, noting that they matched the interior’s original terrazzo floors with exterior two-tone concrete pavers, adding texture to avoid slips.

A water wall made of Virigina slate enlivens a lower terrace off the living room. Photo © Peter Kerze

New details also create privacy. An operable metal-panel art fence (which mimics the house’s paneled gallery wall) provides visual enclosure, while a custom-designed water wall—made of Virginia slate punctuated by stainless-steel elements—uses white noise to drown out the drone of a nearby highway. Accented with numerous sculptures, “the whole courtyard, along with the house’s indoor gallery, feels almost like an art museum,” says Ji. “The reductive material palette with the tree canopy makes it meditative, in a way.” 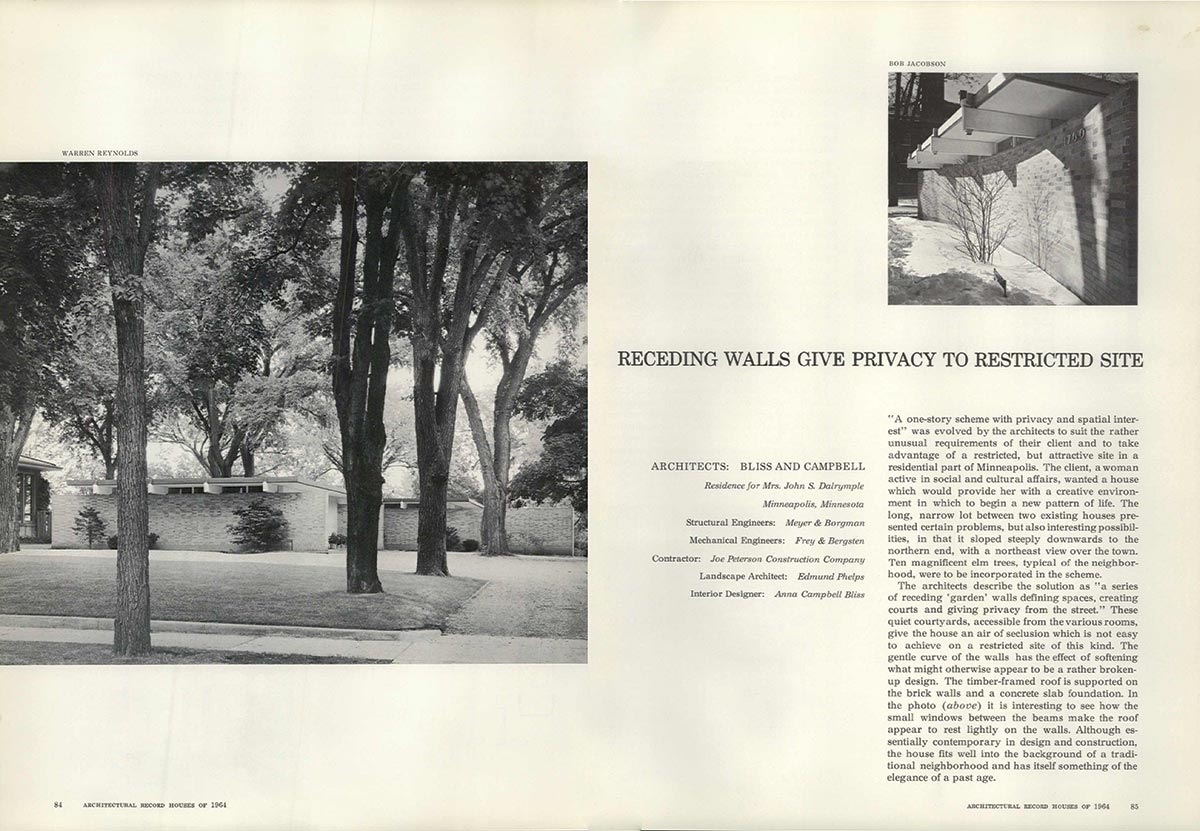