This website requires certain cookies to work and uses other cookies to help you have the best experience. By visiting this website, certain cookies have already been set, which you may delete and block. By closing this message or continuing to use our site, you agree to the use of cookies. Visit our updated privacy and cookie policy to learn more.
Home » Studio Gang’s Gilder Center Materializes at the American Museum of Natural History
Architecture News

“It is all about connections,” says architect Jeanne Gang, founding principal of Studio Gang. She’s referring to the Richard Gilder Center for Science, Education, and Innovation—a $431-million expansion the firm has designed for the American Museum of Natural History (AMNH) on Manhattan’s Upper West Side. With a late 2022 or early 2023 opening just announced, the project aims to improve visitor flow and relieve congestion inside the labyrinthine campus which encompasses four city blocks and 23 contiguous structures built since the late 19th century, including the original wing by Calvert Vaux and J. Wrey Mould (1877) and Polshek Partnership’s Rose Center for Earth and Space (2000). 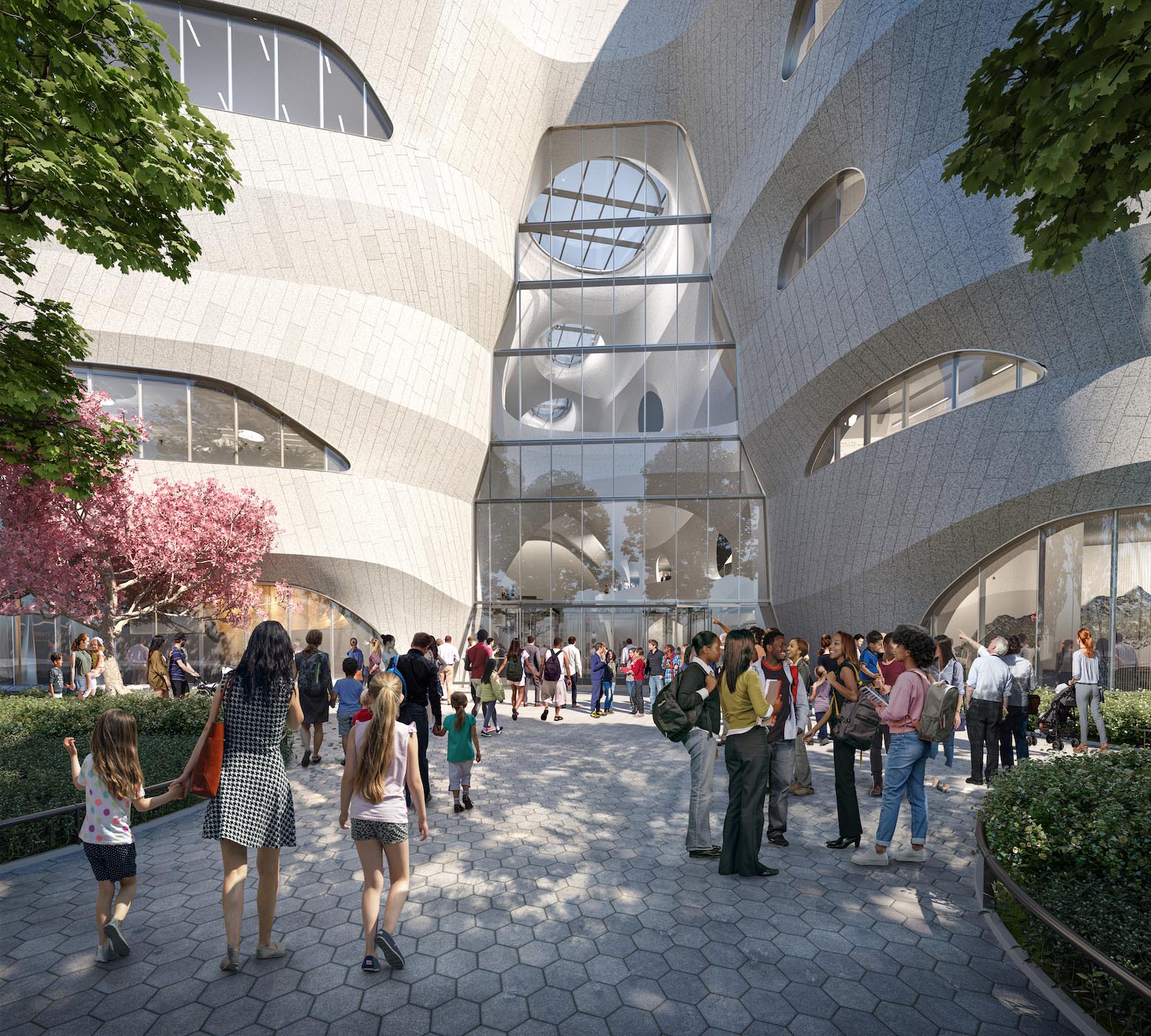 A rendering of the Gilder Center's exterior. Image © Neoscape, Inc.

The Studio Gang project’s ambition is to better connect the museum’s nearly five million annual visitors with its collections and programming, establishing adjacencies and links among scientific disciplines and AMNH’s diverse holdings. Among the new spaces to be housed in Gilder: an “Invisible Worlds” theater, which will feature immersive experiences on topics as varied as the human mind, the ocean floor, or the ecology of forests; a purpose-built space for AMNH’s popular butterfly exhibit; a research library; as well as classrooms and laboratories. A multi-level “collections core” will display millions of scientific specimens representing every area of museum’s fields of study, including vertebrate and invertebrate biology, geology, anthropology, and archaeology. “The core will literally be a record of life on earth and a testament to the legitimacy, authenticity, and reliability of science,” says Ellen V. Futter, AMNH president. 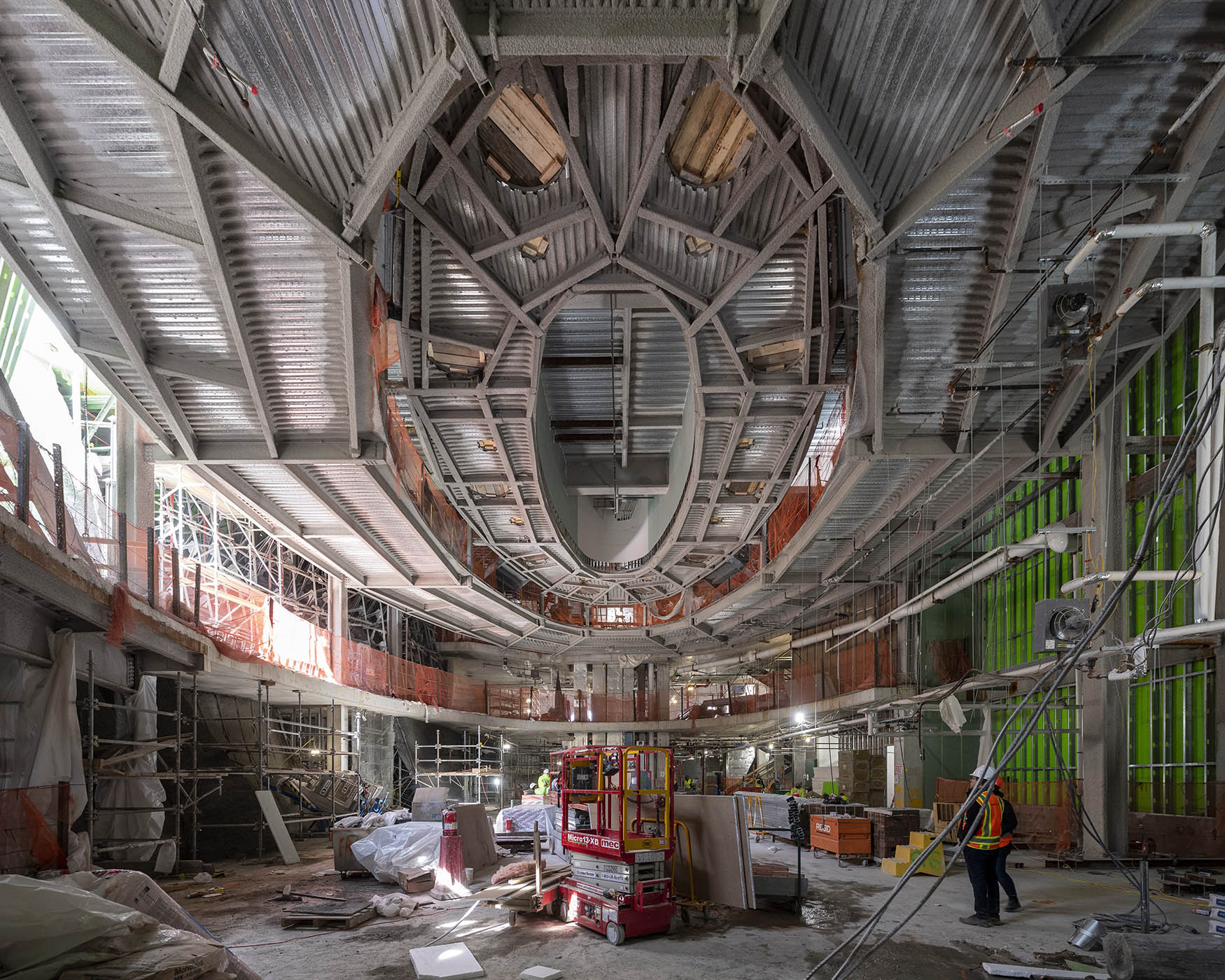 To make way for the 230,000-square-foot project, while minimizing its impact on the surrounding Theodore Roosevelt Park, three structures that were part of the complex have been demolished. The strategy allowed the new construction to be inserted deeply into the museum’s existing footprint and resulted in an expression on the complex’s exterior that is relatively modest in scale—something that passersby on Columbus Avenue can now appreciate, nearly three years after the start of construction. The undulant addition, which will be clad in Milford pink granite (a material used on the main, Central Park West entrance), creates a fully accessible west entry on axis with 79th Street. Because of this positioning, visitors will be able view “Manhattan Henge” from within the building, points out Gang, using the term coined by AMNH astrophysicist Neil deGrasse Tyson to refer the phenomenon that occurs when the setting or rising sun aligns with the city’s street grid. “Gilder will allow visitors to make connections even on a planetary scale,” she says. 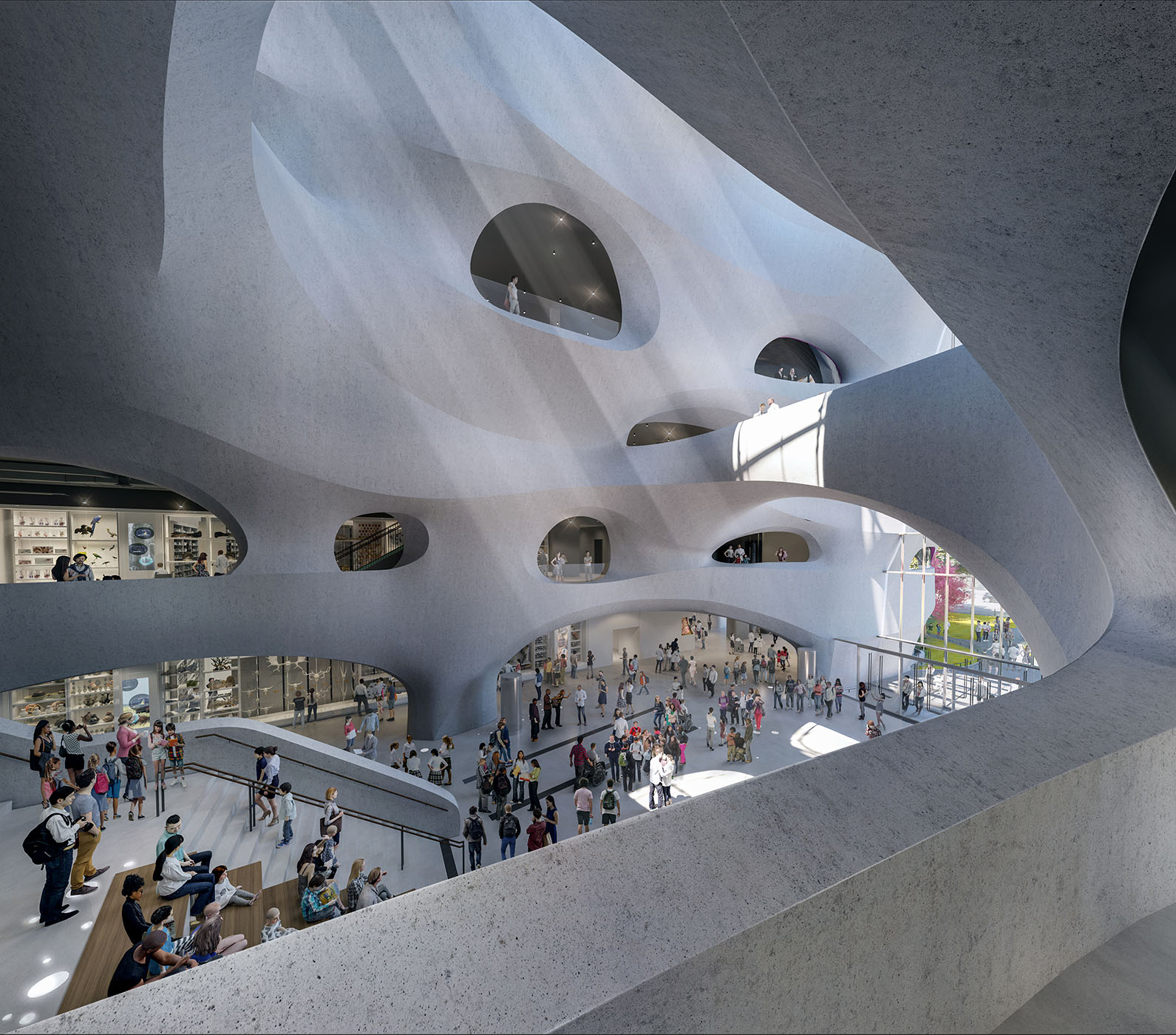 A rendering of the Gilder Center's atrium. Image © Neoscape, Inc.

Though seemingly compact on the outside, from the interior, the addition should feel more expansive—especially within the four-story skylit atrium that is now taking shape. The canyon-like space takes its cues from natural processes such as erosion and weathering, and from hydrologic flows. The organically curved walls comprise what Gang calls a “building within a building,” with the adjacent floors framing into it. The project team ruled out constructing this sculptural element in poured-in-place concrete since that method would have required laboriously built formwork and necessitated more regular and repetitive shapes to enable their reuse. Instead, the atrium has been made with schotcrete, a process coincidentally first developed in the early twentieth century by Carl Akeley, an AMNH taxidermist. The technique involves spraying concrete on an armature of rebar and metal mesh. Studio Gang refined its design for the shotcrete walls’ contours with physical mockups and specialized modelling software, paying particular attention to the “creases,” or edges, where the various curved surfaces meet.

The atrium includes bridges and openings to make physical and visual links among the museum’s many spaces—and to make the museum’s previously confounding circulation more legible. Gang’s hope is that her intervention will spark a spirit of discovery in visitors. Once inside, she says, “people will see different pathways and feel like they want to explore.” 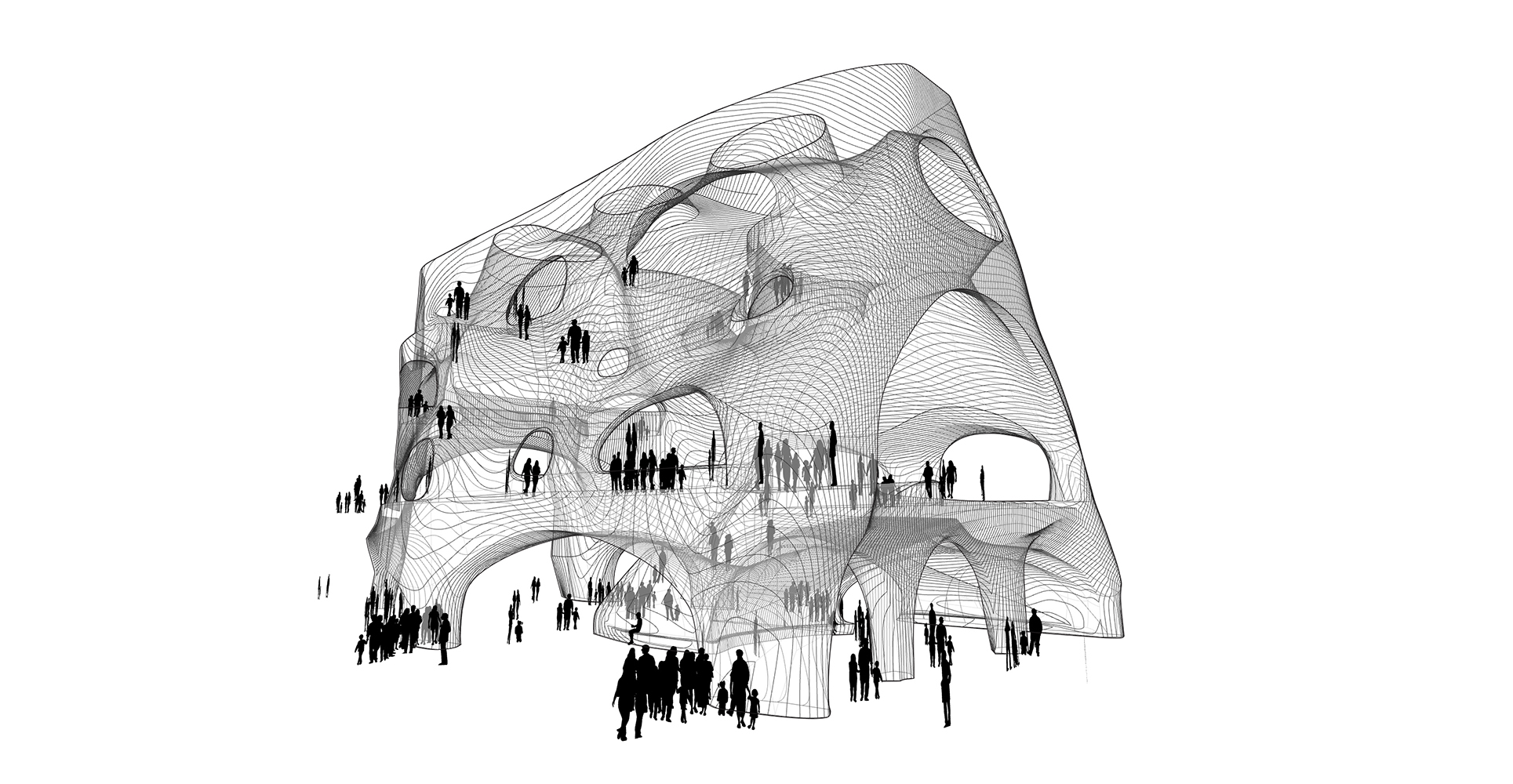 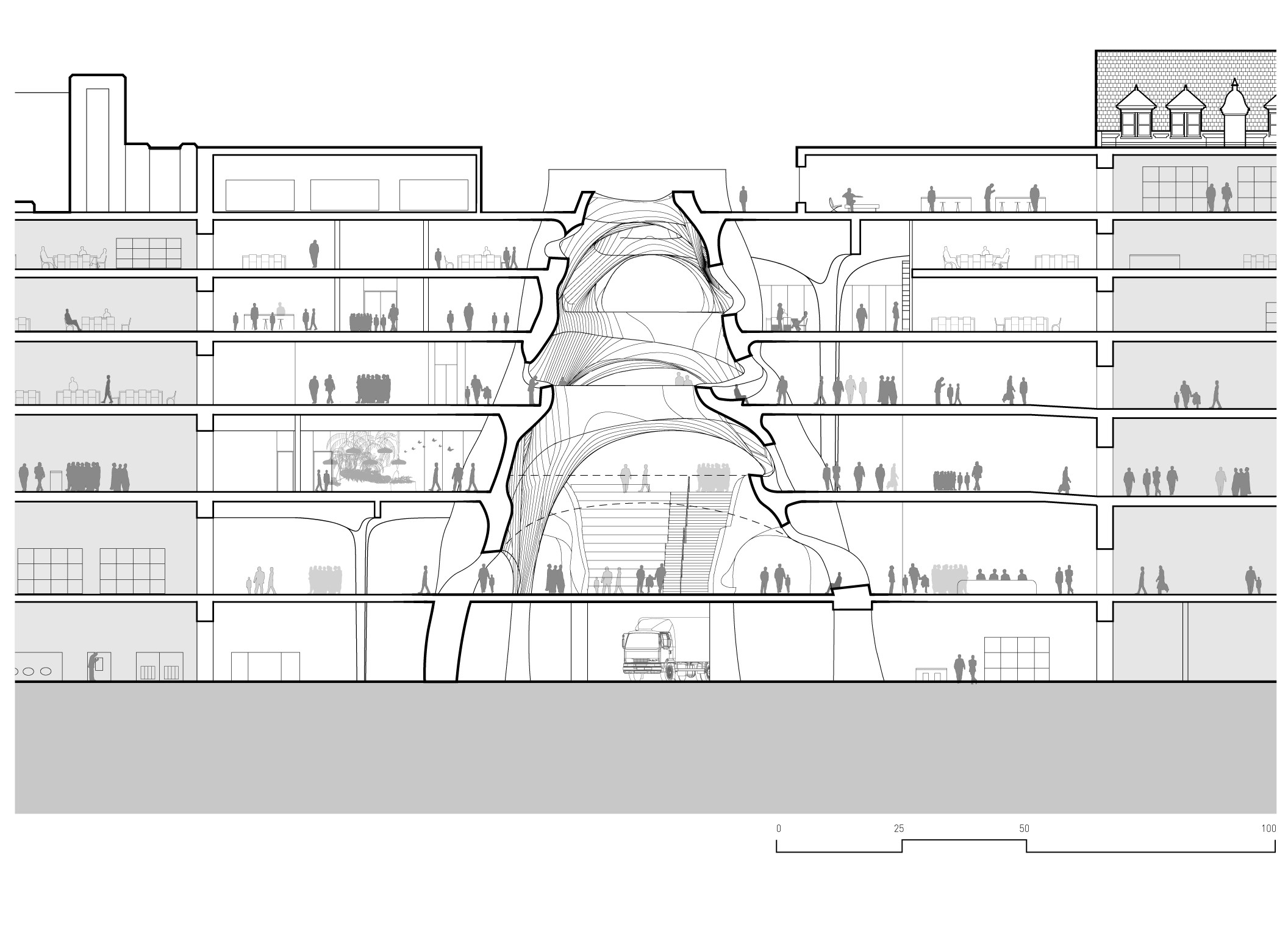