The latest addition to the storied grounds of Château La Coste outside of Aix-en-Provence, a curvaceous white pavilion designed by Brazilian architect Oscar Niemeyer, will be inaugurated on April 8 and opens to the public in June. Conceived in the architect’s last years and constructed posthumously, the pavilion is the final project drawn by the Pritzker laureate before his death, at 104, in 2012. It is also, says the museum, his “last gift to France”—the country where he went into exile in 1967 following the Brazilian military coup, and where he built numerous projects such as the French Communist Party headquarters and the Bourse du Travail in Bobigny. 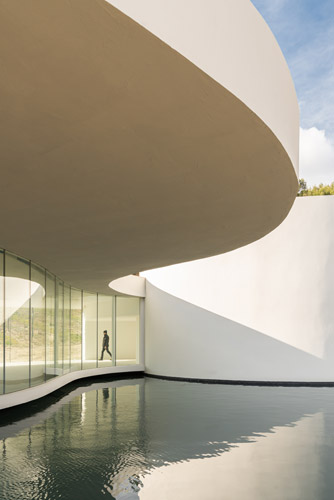 The structure, which is nestled in a vineyard of Vermentino grapes, is entered through a curving, glass facade that abuts a reflecting pool. Inside, visitors encounter a 4,000-square-foot gallery, which connects to an 80-seat cylindrical auditorium. The generous use of glazing aims to create the impression of the rolling vineyard passing through the building. “The structure is at home in this setting and will be a joy to walk around,” said the architect in a documentary made toward the end of his life.

First invited to contribute to the landscape in 2010, Niemeyer spent a year choosing a site and developing the design, with his team starting their technical visits the following year.

Château La Coste was conceived in 2002 by businessman Patrick McKillen, who purchased a 17th-century vineyard on which he has created a 500-acre experiential destination that combines sculpture, architecture, wine, and hospitality. Niemeyer joins a who’s who of invited artists and architects—including Jean Nouvel, Tadao Ando, Ai Weiwei, Louise Bourgeois, and Frank Gehry—whose site-specific interventions dot the verdant rolling landscape.