At the beginning of this year, architectural historian Ievgeniia Gubkina could go to bed and assume that the buildings she studies would be standing the next morning. But for Gubkina, as for tens of millions of other Ukrainians, the events of the past months have upended even the most basic premises of everyday life. As Russian airstrikes have hammered Kharkiv in northeastern Ukraine and other cities and towns across the country, Gubkina has watched the Ukrainian population—and the buildings they occupy—fall victim to indiscriminate Russian bombardment and violence, aimed at destroying a people and nation.

Gubkina, an architect and leading scholar of modernism in Ukraine, is an advocate for historic preservation and the author or editor of several books, including Soviet Modernism, Brutalism, Post-Modernism: Buildings and Structures in Ukraine 1955–1991 (2019). She cofounded the Urban Forms Center, a non-profit that has organized a number of research projects around Ukrainian cultural and architectural history. Among these is the recent multimedia online exhibition Encyclopedia of Ukrainian Architecture, cocurated by Gubkina, which brings together the work of more than 40 filmmakers, artists, and architects to explore Ukrainian architecture from multiple perspectives.

A lifelong resident of Kharkiv, and a graduate of the Kharkiv National Academy of Municipal Economy, Gubkina remained in the city until escaping with her daughter and a single suitcase to Latvia after the Russian invasion began. But, she says, she is committed to returning to Ukraine soon and, ultimately, to Kharkiv.

Gubkina spoke with RECORD news editor Izzy Kornblatt about the destruction that has befallen her home city, the meaning of preservation during wartime, and the heroism of Ukrainian resistance.

Given the human tragedy unfolding in Ukraine, are you able to worry now about the destruction of buildings?

The first question is, of course, about the lives of people and their safety. But what can we do as architectural historians, as protectors and conservators? We can do our jobs. And we should continue to do our jobs. It’s just impossible [for me] to think in any other way.

And the war somehow connects exactly with history—with historical manipulation by Russia, and with propaganda. If we lose our heritage, that would be a step toward losing our identity. That’s why the [destruction] is very painful for me—because this is part of war, a different dimension of war. It’s not just the killing of people. It’s about demolishing heritage, demolishing history, demolishing a nation. If you look at Kharkiv, you can see that at least every fourth building in the city has been demolished. It’s an awful number, and it’s a number that grows and grows.

From the other side, I also think that such discussion will help our society heal and grow in the face of the huge trauma that we are experiencing. Heritage is always a transitional object, and you need that transition to somehow feel that the trauma is not so big, and then you start your new life. Our demolished heritage can help us think about who we are, what we should do with our past, how we should preserve something, and what we will or will not preserve. 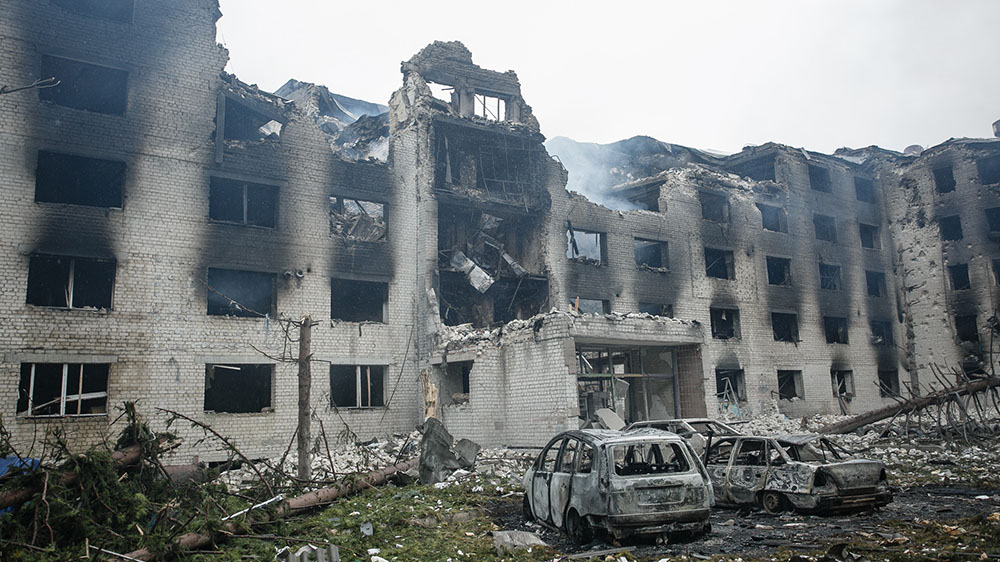 How do you see modernist buildings fitting into all this?

Maybe it looks like bombs are just destroying separate buildings in different parts of the city, but it’s not so. There is systematic order to the Russian army’s actions. One thing is that they want to destroy historical areas—usually the central parts of the cities. That repeats the approach of the Second World War, as seen in Warsaw and Rotterdam.

And they target residential areas. Maybe you’ve seen the pictures of typical Soviet-era housing under fire, with huge holes from rockets and so on. Well, 10 years ago, when we were investigating [Soviet-era] mass housing, we always said that the social function was to make cheap architecture for the greatest number of people—so these are the buildings where a lot of people lived. And now, because of all those lives, they have become a target. Because people are the target.

But what should we do with these demolished objects? Should we preserve them as a monument, as evidence of war crimes? Or will people just want to forget, because it’s very painful to see residences under fire? Actually, I think the monument to all of 20th-century architecture is these [prefabricated panel] residential buildings. They were the essence of the architectural discourse. And now it has died.

The Jewish architect Avraam Miletsky (1918–2004), who led something of an informal architectural movement in Kyiv during the Soviet era, is often seen as one of Ukraine’s most important modernists. In the past, you’ve discussed how his work was, in part, a response to the Holocaust, and I wonder whether you see him as a relevant model for Ukrainian designers today. 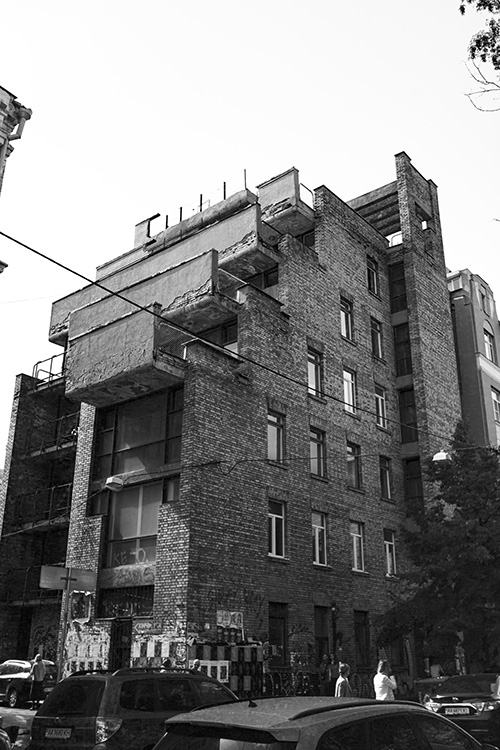 When I wrote that, I never thought that there would be a new war. But I think that the school of Miletsky is really something that can help us now, because he responded to war, and to the space between life and death and between health and illness. I think that’s very connected with his personal experience—his mother and sister died at Babyn Yar [in the 1941 Nazi massacre there]. He somehow put that personal experience and subjectivity into his architectural work. And I think the idea of not shying away from your experience and your psychological material in your work is very good for us now. If Ukrain­ian architects try to avoid our trauma, we will go in the wrong direction. We should develop our architecture through that trauma.

I know that Kharkiv is a place of tremendous importance to you and that seeing the destruction has been heartbreaking. Have there been particular episodes of resistance in the city that have given you hope?

Heartbreaking is exactly the word. I’ve worked so deeply with this city, and I’m a fourth-generation Kharkivite. I remember the first video of the bombing of a residential area around the third day of the war. I don’t know why, but I put that on repeat and watched it maybe seven or 10 times, and it felt like they did that to me, to my own body. To lose the city is something very strange. All your past is demolished: everything you had, your memories, your childhood, your university years, all the best memories and all the worst memories, all the emotions that you had in the city, how you talked with the city, the relationship you built with the city.

What can I say about heroism? First of all, there is the heroic defense. The city hasn’t been taken by Russians. It is still a Ukrainian city. Kharkiv is nearly 2 million in population, and they started bombing when the entire population was still there. At such moments, you feel that all of Kharkiv’s people are one community. The Ukrainian army did very heroic things, and everybody supported them. In those moments, it felt like the city was alive.

But then people started to evacuate, and now the city is a bit empty, and that is very sad—it’s as if everybody just decided to leave the city alone. It’s so painful for me that, each evening, I start preparing my belongings and say to my relatives that I’m going to return. My children are now in a safe place, but I feel that I should go back to Kharkiv. Everybody says, what will you do there? It’s so dangerous, and what will you actually do? But the feeling is that you should just be there. 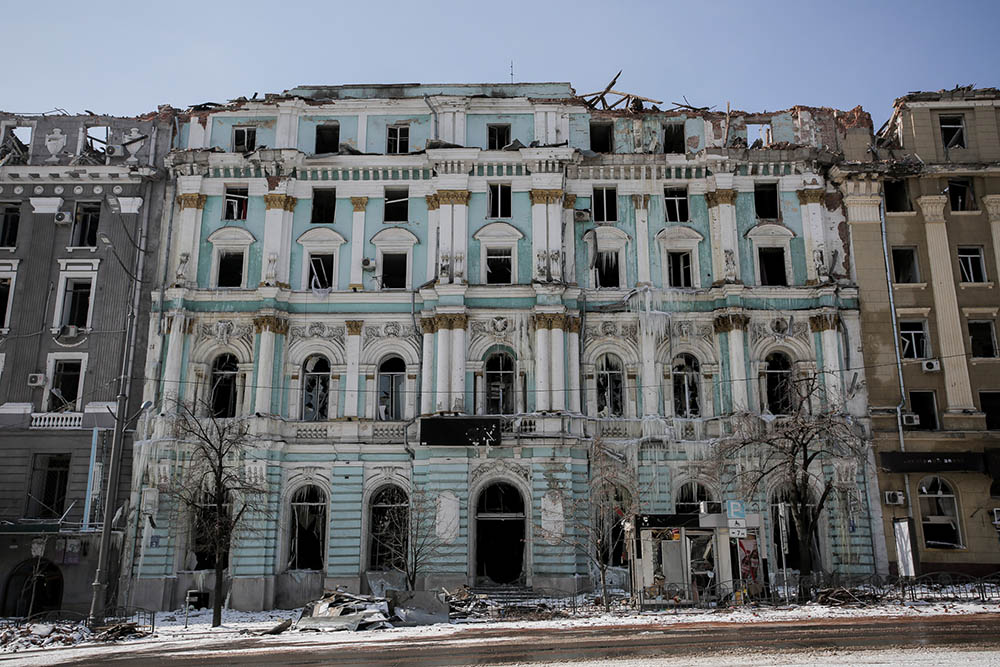 On the Boards: a Museum, Towers, and New Urban Waterfronts