One of the worst atrocities of the Nazi regime took place in a ravine just four miles from the center of Kyiv, where, beginning on September 29, 1941, German soldiers killed more than 100,000 people, most of them Jewish. Controversy over how to mark the spot, called Babyn Yar, has raged for decades. But now the Babyn Yar Holocaust Memorial Foundation is planning a $100 million complex, of which a synagogue recently became the first building to open. (There will also be a church and a mosque, as well as museums and a research center.)

The synagogue was designed by Manuel Herz, a Basel-based architect who has designed a hospital in rural Eastern Senegal and a humanitarian who has devoted years to aiding the Sahrawi people of Western Sahara. He is also known for a Jewish center in Mainz, Germany (2010), itself a sort of memorial in that it was built on the site of a synagogue destroyed by the Nazis in 1938. Herz is fascinated by buildings that move; in 2017 he completed a small apartment building in Zurich whose facades open and close like flower petals.

The Babyn Yar synagogue opens and closes like a pop-up book, an effect Herz achieved by examining dozens of such volumes before working with structural and mechanical engineers. The project had the support of former film director Ilya Khrzhanovsky, now the artistic director of the Memorial Foundation. When the giant book is closed, it is a rectangular volume 26¼ feet wide, 36 feet tall, and 10 feet thick, on a raised platform of reclaimed oak gathered from prewar Ukrainian buildings. The platform rests on a strip of concrete that barely cuts into the soil. “The intention was to disturb the ground—which is literally soaked in blood—as little as possible,” says Herz. 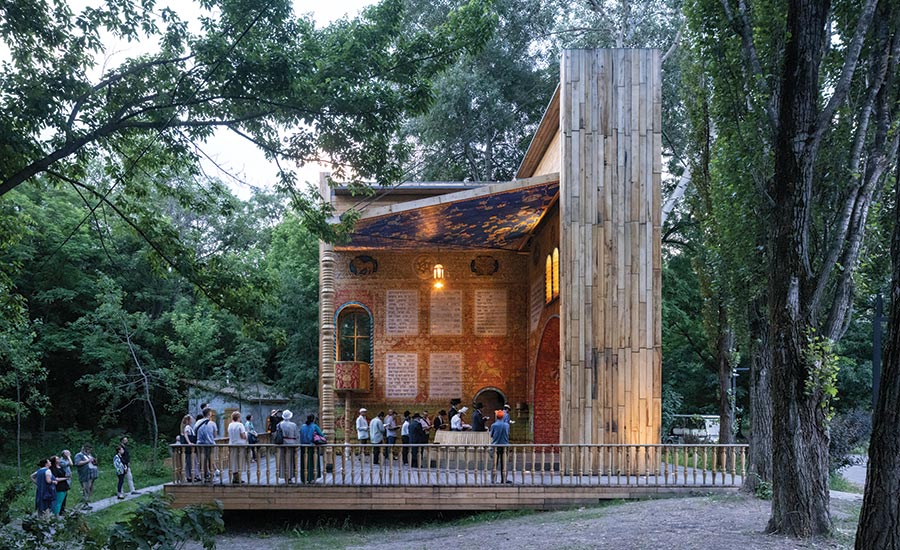 The wood structure sits on a platform of reclaimed oak. Photo © Iwan Baan, click to enlarge.

When open, the building resembles an old wood synagogue typical of small Ukrainian villages before the war. Its elaborate decorations, painted by local artisans, include a Hebrew prayer for turning a nightmare into a dream. The ceiling illustrates the night sky as it appeared on September 29, 1941, with flowers in place of stars.

The mechanical aspect of the building satisfies one of Herz’s goals, which was to create a new ritual at the site. It takes a group of people turning a wheel for up to 30 minutes to open or close the building (an optional motor assist can reduce the time to 10 minutes). Turning the wheel, the architect observes, brings the congregation together in the act of “making” the synagogue, and in that way moving beyond the tragic past. And as something fragile, and modest, it goes to the heart of what a synagogue should be, he adds of his creation.

The wood structure opens and closes like a pop-up book. Photos © Iwan Baan

Design Miami 2017: Furniture by Architects, Design by Artists, and an Early Look at the ICA