On April 15, the National Building Museum (NBM) opened a new exhibition, Notre-Dame de Paris: The Augmented Exhibition, which brings visitors into an immersive environment that captures the past, present, and future of this central piece of Parisian culture and French Gothic architecture. The exhibition, now on view through October 9, commemorates the third anniversary of a fire that broke out during renovations to the cathedral’s spire, and it takes a deeper dive into the architectural and construction methodologies used to create—and, over the last few years, to rebuild—this landmark structure.

Three years ago, on April 15, 2019, Notre-Dame burned. The devastation of the 12th-century building was live-streamed around the world, with viewers witnessing the fiery ruination of one of the icons of Parisian culture in real time. Investigations that followed the extinguishing of the blaze revealed that undertaking a $12-million renovation of the cathedral’s 1860 wood-framed spire—an addition designed by Eugène-Emmanuel Viollet-le-Duc and Jean-Baptiste Lassus—was the likely cause, probably originating in the heavy-timber structure supporting the roof.

The exhibition at the Building Museum begins with the 2019 fire, then takes a trip backward through time to 1163, when the cathedral’s construction began. Or, more precisely, the exhibition begins with visitors being handed a device for virtual time travel called a “HistoPad,” a digital tablet developed by Histovery, which displays augmented reality (AR) recreations of the site of Notre-Dame, replete with 360-degree rotational capabilities and touch-activated historical notations and video animations. 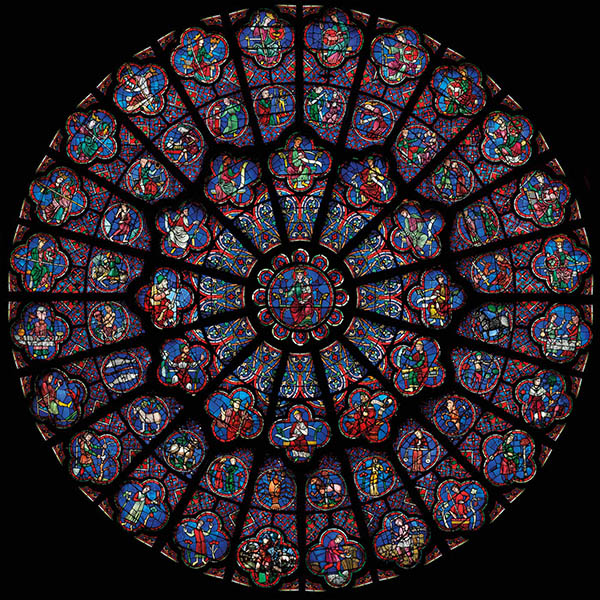 Standing in front of large-scale, high-resolution photographs of the building displayed on 10-foot-high vertical panels, visitors use the tablets to scan each of 21 stops, demarcated by HistoPad-specific images (most akin to a circular QR code), along the way of their AR time-travel experience; these populate the devices with facts and information about the image shown, with options to learn more about builders and craftspeople, construction techniques, and various events through videos and animations that span the cathedral’s nine centuries of use. Interspersed with these images, along a circulation path lined in vinyl recreations of the cathedral’s tile floor, are smaller architectural models and life-sized replicas of Notre-Dame’s statuary, including an imposing gargoyle guarding a room housing an enlarged detail of Jacques-Louis David’s 1807 painting, The Coronation of Napoleon—one of the many historic events to take place within the cathedral. The exhibition’s final room focuses on reconstruction following the 2019 fire, including views of rebuilding efforts as of last year.

Last year, the NBM also hosted a truss-building project as part of its annual Summer Block Party, resituated outdoors due to the pandemic. Students from Catholic University’s School of Architecture and Planning worked with Massachusetts-based firm Handshouse to build and raise a traditional heavy-timber truss, using Notre-Dame’s original specifications, intended to be sent to Paris as part of the rebuilding effort.

That translation of traditional construction methods into contemporary rebuilding aptly describes what goes on in the new exhibition. Visitors take modern, digital technology to revisit historic, analogue techniques before re-emerging in the near-present reconstruction, recreated at scale within the tablet’s immersive screen. “We've always said, with a little laugh, that we're the Building Museum, about the built environment, but we can never show it in full scale here,” says Cathy Frankel, vice president for exhibitions and collections at the NBM. “I think we changed that narrative with the summer installations, which have been hugely successful, and which we will get back to as well. But I think on the technology side, [Histovery] really opens the doors in what we could do.”

This 360-degree panorama, included in the National Building Museum's new exhibition on Notre-Dame de Paris, shows the interior vault of the cathedral that is currently undergoing restoration following a 2019 fire. Video © Histovery