A steel-framed, larger-than-life playground; animal-shaped facades covered with plants; and a towering sculpture of a guardian carrying her child—these are some of the installations that greeted visitors last weekend at this year’s Coachella Valley Music and Arts Festival in Indio, California. Returning after a two-year, Covid-19-induced hiatus, the desert event boasts not just a host of musical guests, but also 11 artistic installations by creatives from seven countries across Europe, North America, and South and Central America. 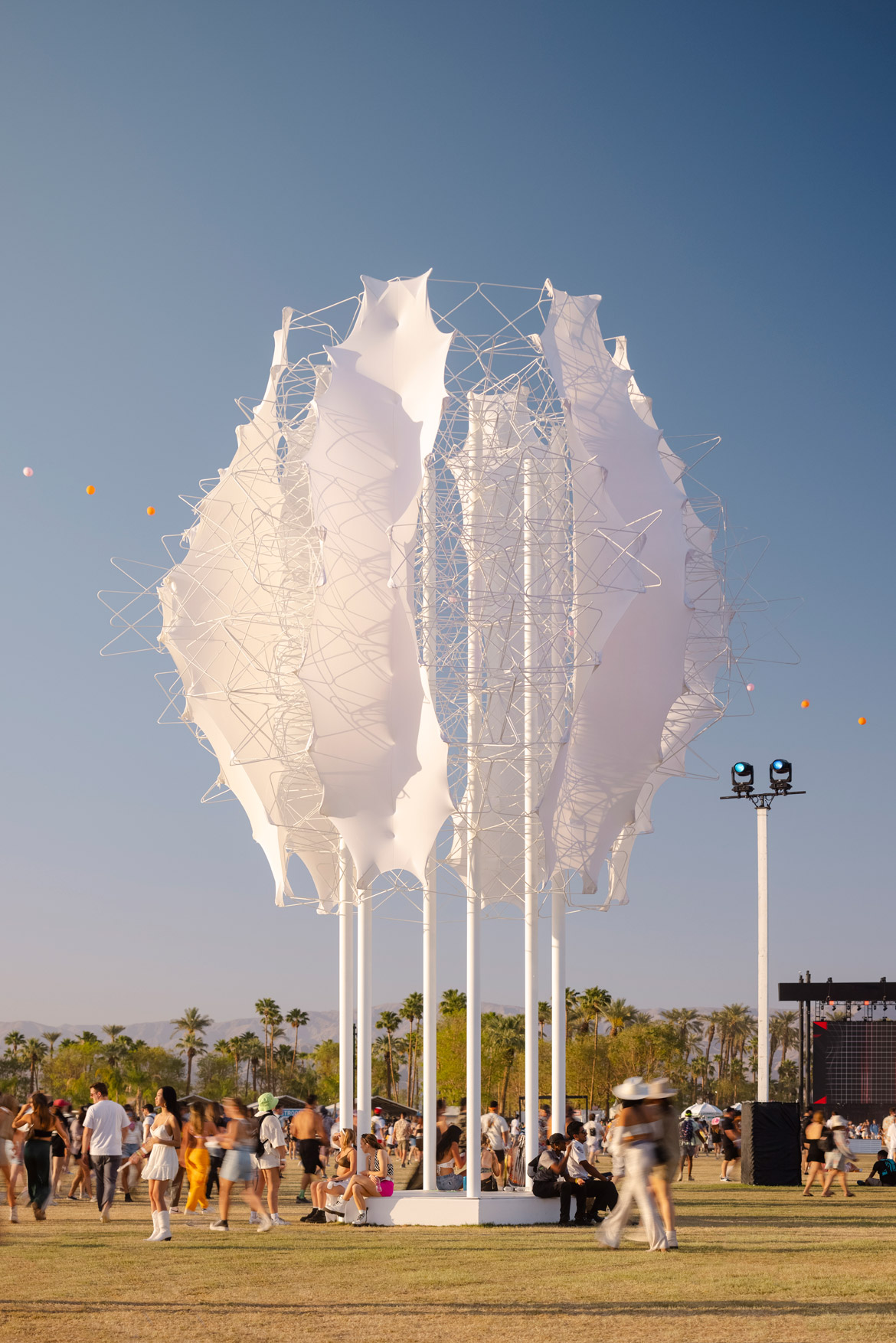 “Building on our art program with designers, architects, and visual artists from around the world and from the Coachella Valley allows festival goers to explore shared global interests and perspectives through the experience of ambitious and one of a kind, large-scale installations,” said Paul Clemente, the festival’s art program manager, in a statement. “In the same way music is a universal language, the experience of these new spaces invites connectedness and adds an iconic sense of place in the spirit of the festival.”

Nominated for MoMA PS1’s Young Architects in 2019, New York-based Romanian architect Oana Stănescu teaches at the Harvard Graduate School of Design and MIT and often collaborated with the late designer Virgil Abloh. At Coachella, she has filled the animal-shaped steel and plywood silhouettes (with a built-in irrigation system) of Mutts with yellow bell flowers, jasmines, cassia plants, fountain grass, and tri-colored lantanas. Following the festival’s conclusion after this coming weekend, the plants will be returned to nurseries and most of the structural material used will be reused.

“As we approached it and started designing, it was the idea of ‘How to do something that lasts for just a week, but that isn't just creating a huge amount of waste?’ So we used recyclable materials or elements that could continue to live past the two glorious weeks of Coachella,” says Stănescu. “I'm quite often intrigued by how we can achieve the most with the least gesture. So this idea of gathering around plants, essentially, is a way of really celebrating what's there already.” 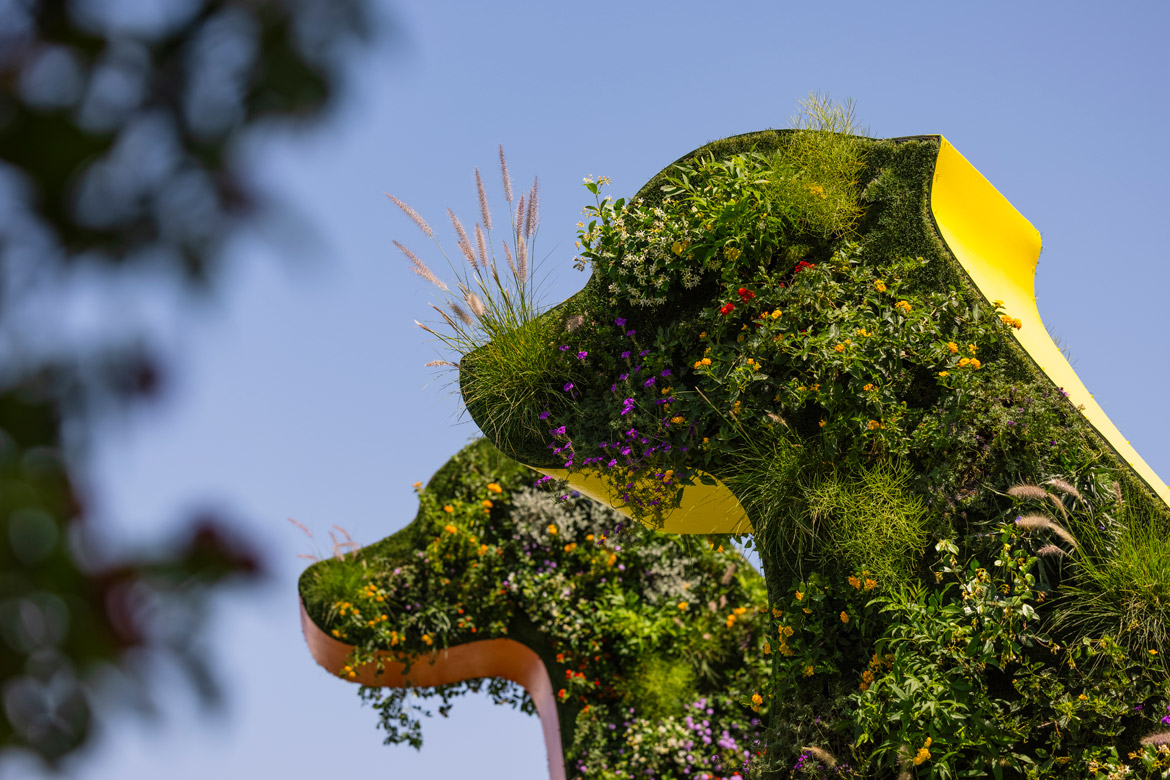 LosDos, a studio run by artists Ramon and Christian Cardenas and based in El Paso, Texas and Juarez, Mexico, creates murals, screenprints, street installations, and inflatable sculptures. For the festival, the pair designed La Guardiana, a masked, horned figure carrying a child and wearing an enredo (skirt) and rebozo (shawl). According to the artists, as “the guardian of the immigrants from Mexico, Central America, and around the globe,” she “represents strength” and “an appeal for an understanding of the reasons that people make the dangerous journey to strange lands.” 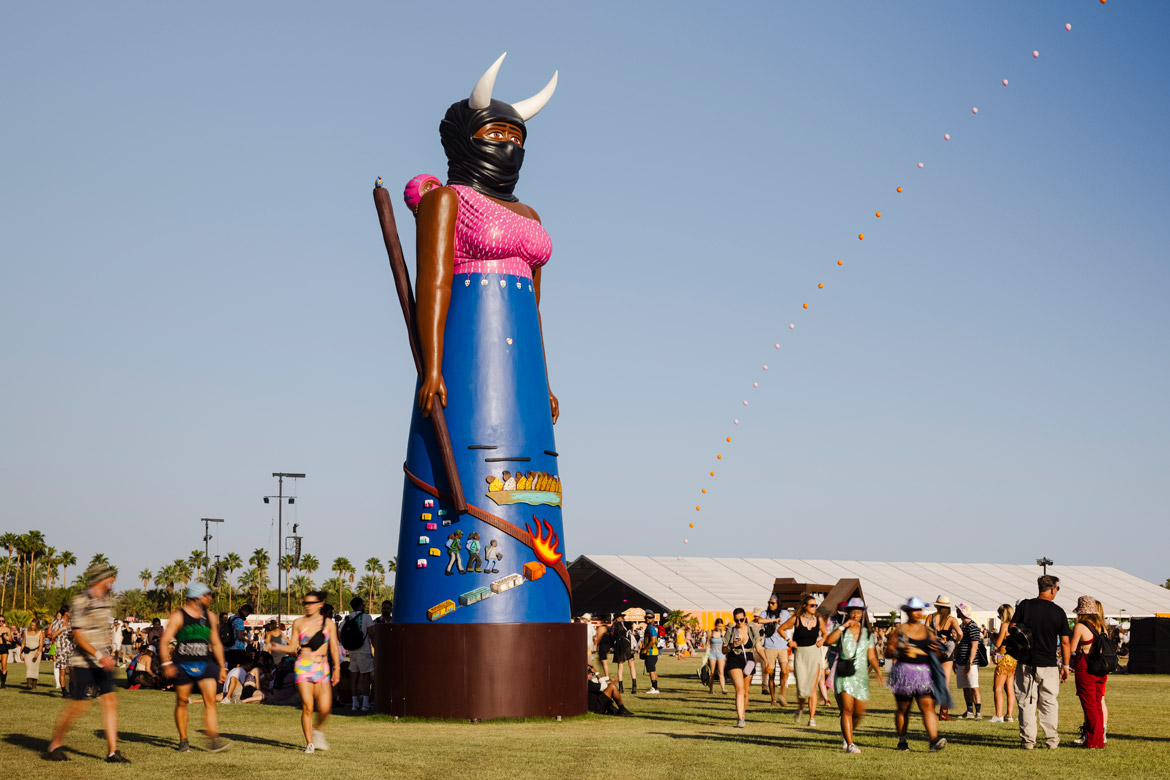 Indio-born multimedia artist and biomorphic painter Cristopher Cichocki works at the intersection of industrialization and nature through an exploration of the desert’s history. His five-story Circular Dimensions (Microscape), constructed from 25,000 feet of PVC pipes, forms a “band-shell shaped” pavilion where artists and scientists create experimental video art, rich with imagery of sea life, and soundscapes incorporating industrial rhythms. 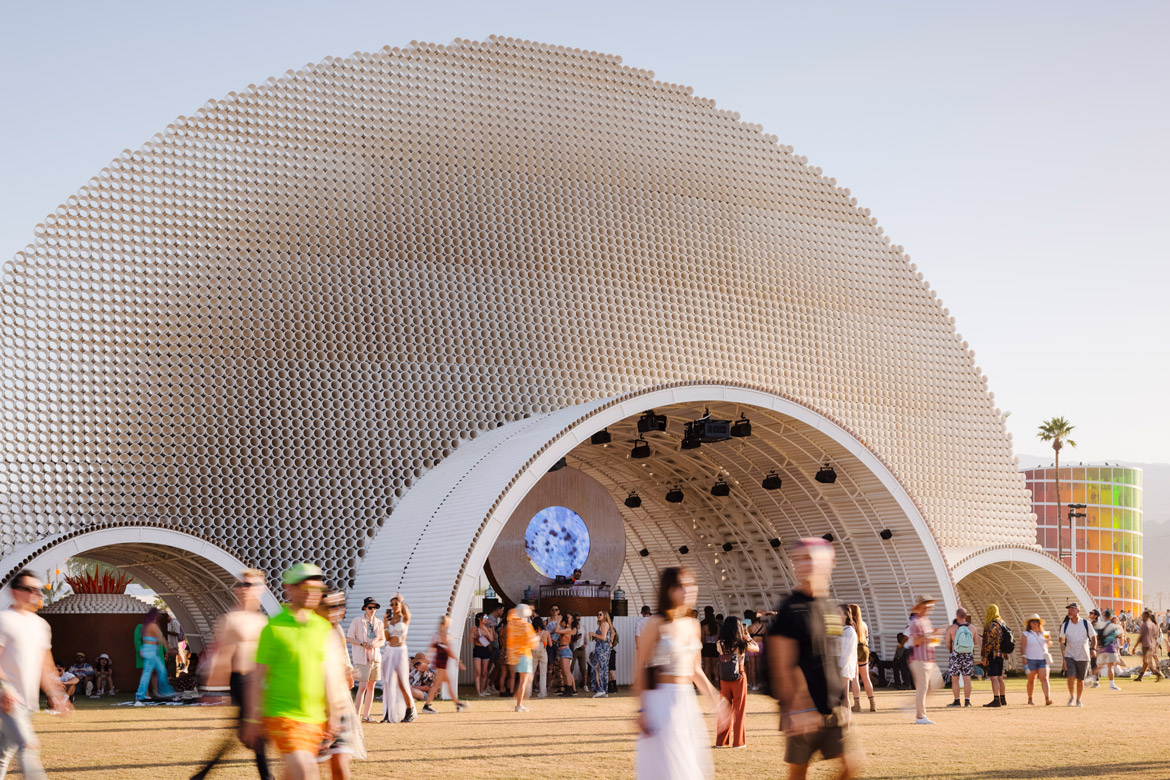 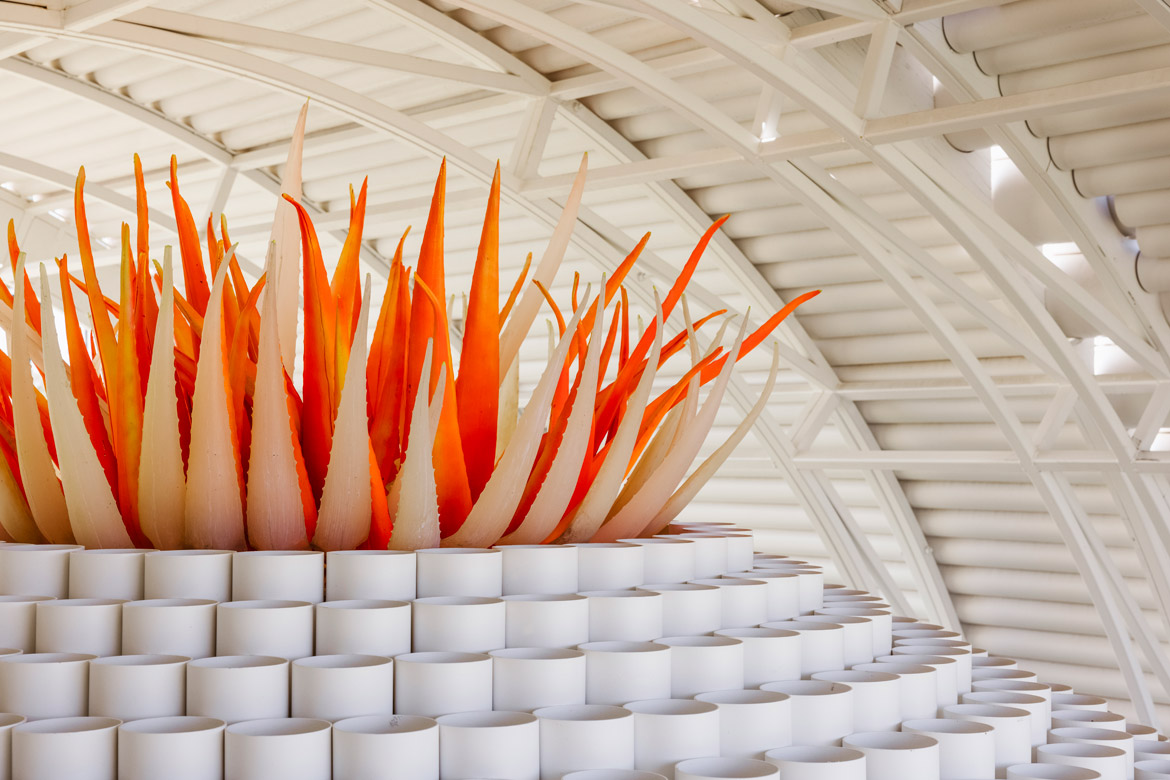 Architect/educator Alessandro Orsini and designer/musician Nick Roseboro make up the New York and Rome-based firm Architensions. They explore the relationship between the informal and the built environment; their piece, The Playground (which cannot be climbed but references “classical leisure architecture,” according to a Coachella release) consists of a steel grid framework, polycarbonate cladding, and dichroic film to make up towers and a piazza. 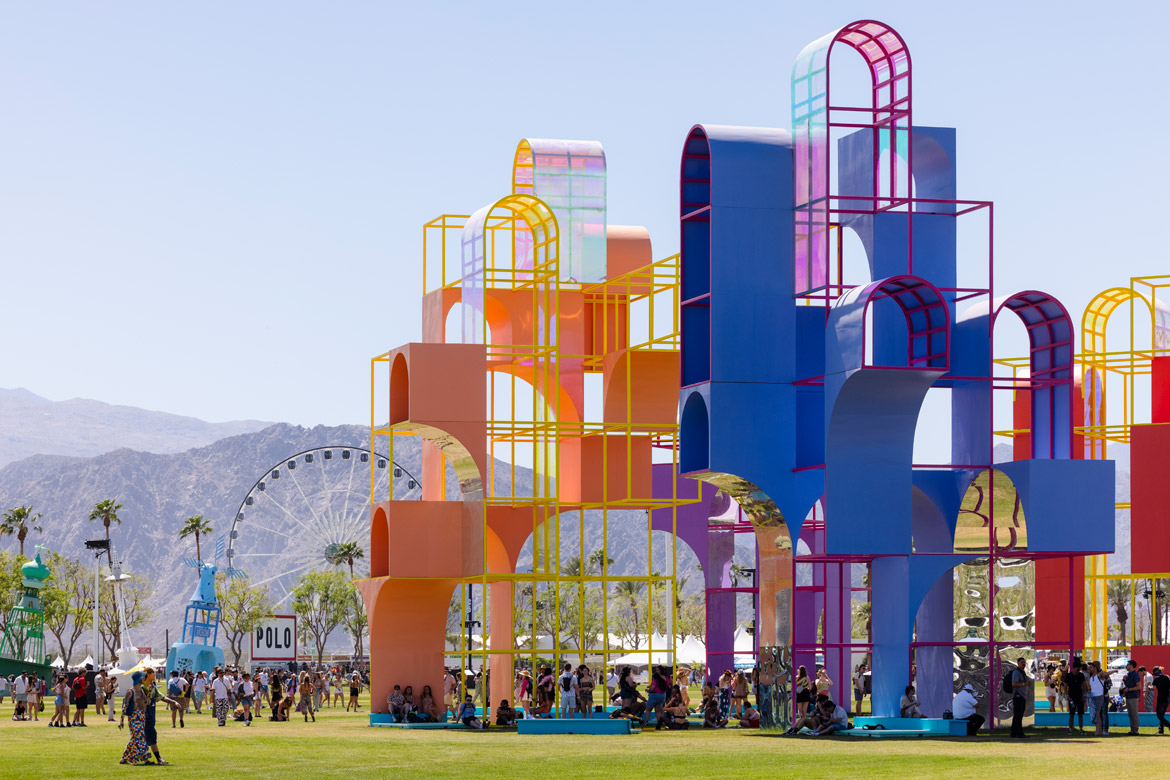 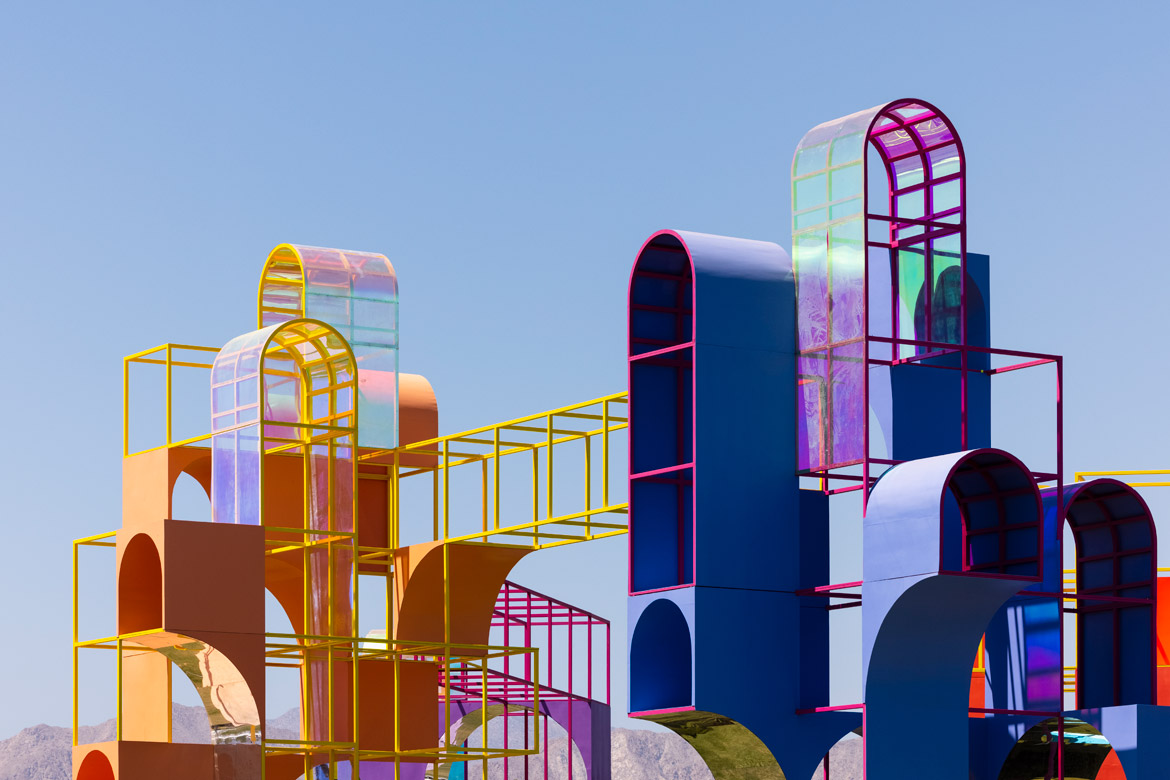 Designer Kiki Van Eijk formulated Buoyed: three four-storied, angled LED-lit sculptures (one off-white, one blue, and one green) which utilize elements from butterfly wings, Dutch-style windmills, and igloo domes in an effort to emphasize diversity and inclusiveness. An accomplished name in Dutch design, Van Eijk works with a diligent sense of whimsy and wonder while paying close attention to small details. 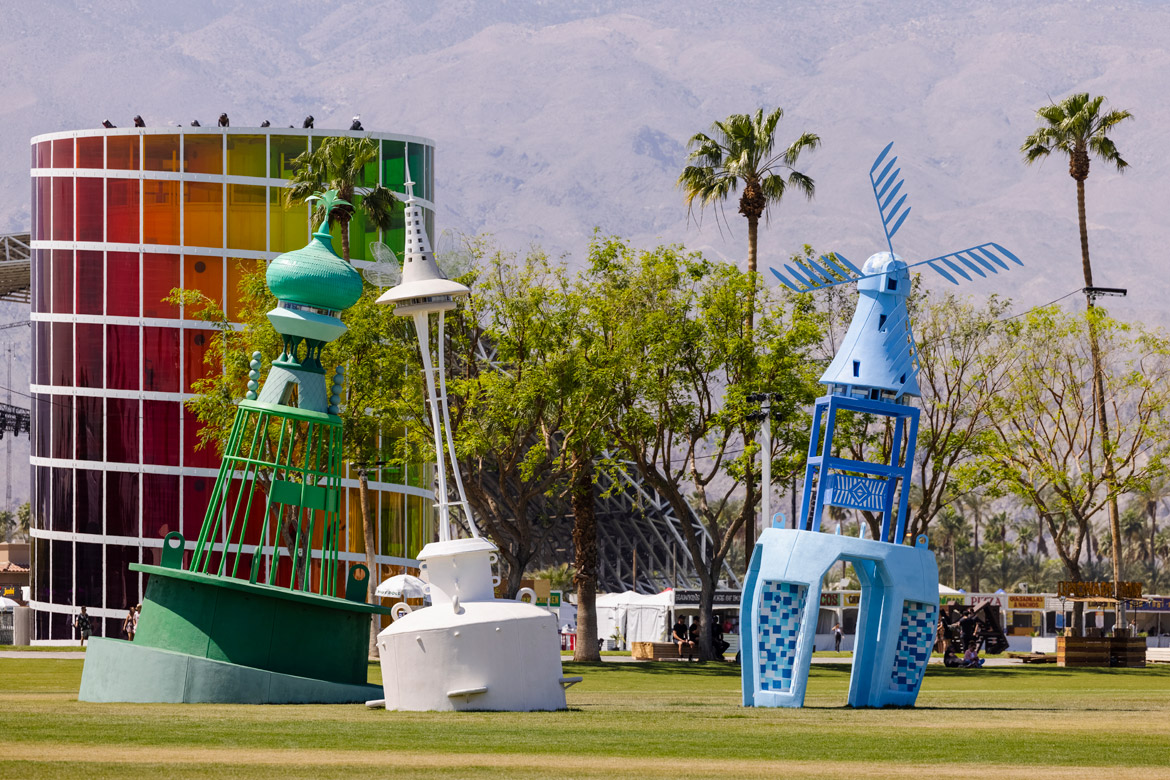 Buenos Aires’ Estudio Normal, founded by architect and Galería Monoambiente director Martín Huberman, conceptualized Cocoon (BKF + H300). The nine-story piece features 300 “silky” reproductions of the BKF chair. Initially conceived by three architects in Argentina in 1940, the widely imitated mid-century modern chair came to be known internationally as the “the butterfly chair.” Huberman’s reclamation of the myth of the chair born from a cocoon utilizes window-shade fabric for daytime shade and nighttime illumination. 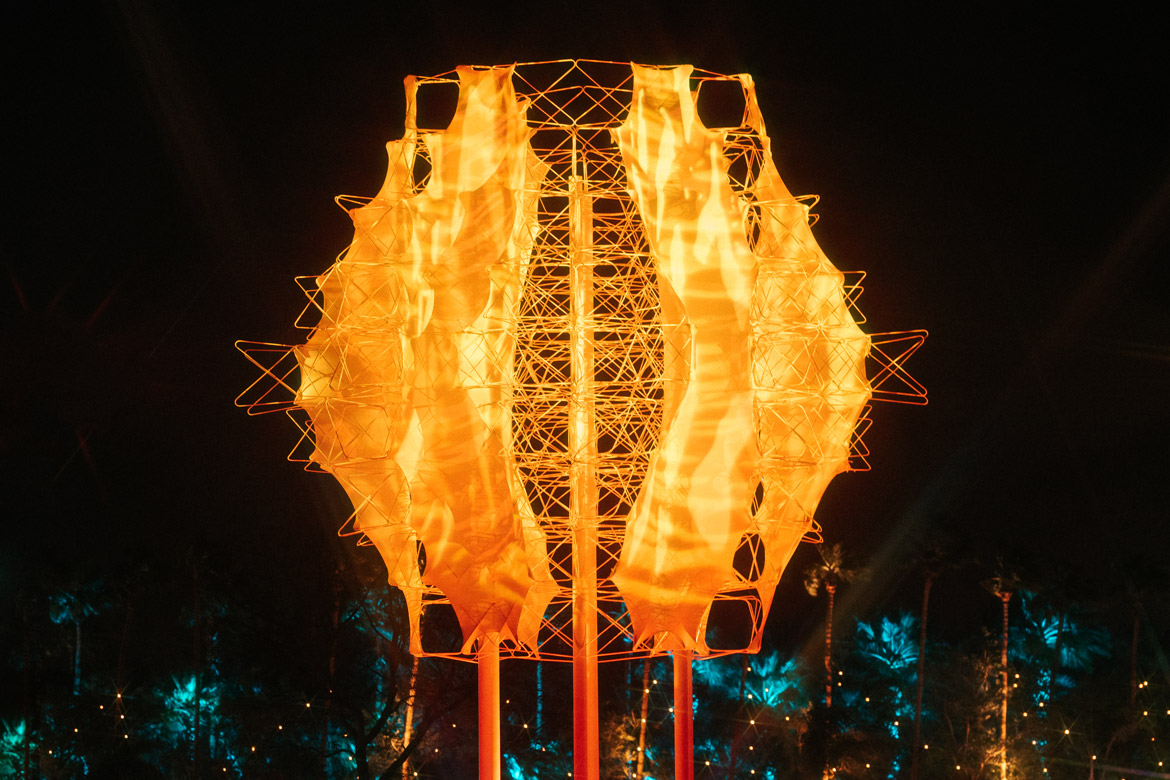 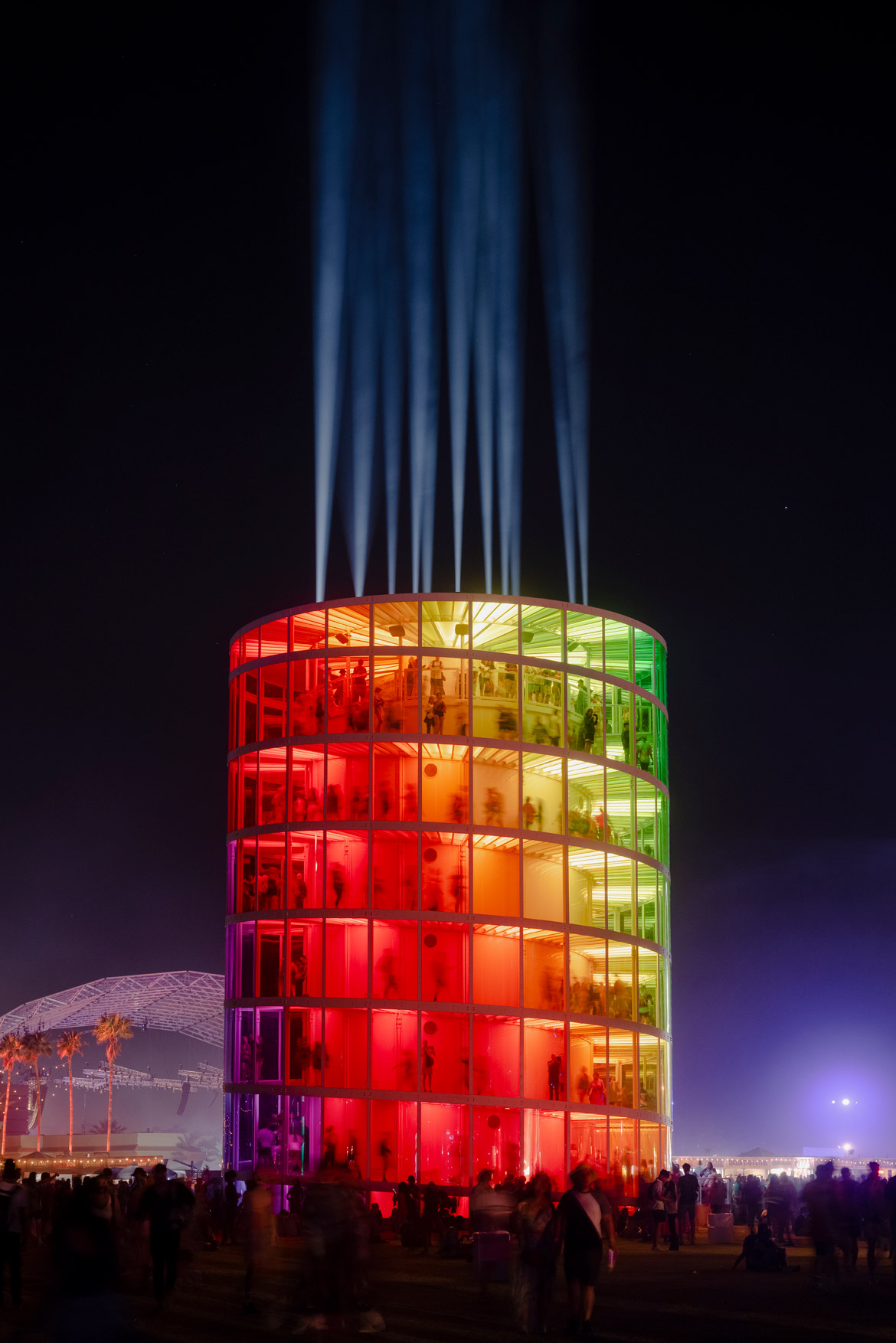 Despite often-espoused recycling initiatives (such as water refill stations, plastic bottle return rewards, dedicated recycling teams, TRASHed—artist-redecorated recycling bins)—in addition to interactive installations revolving around sustainability—the festival produces plenty of waste. According to a report cited by the Palm Springs Desert Sun, the festival generates some 107 tons of waste daily—only 20 percent of which is recycled.

“I think we're all kind of trying to find our way of contributing to this conversation,” says Stănescu of the festival’s environmental impact. “But architecture and construction is one of the biggest polluting industries. You are so constrained by the global industrialization of the entire system. So you're quite limited in many ways. There are hard choices to be made sometimes. I don't know that there are perfect answers yet.”