As businesses call workers back to the office, many are realizing that it will take more than a memo to persuade staff to swap pajama bottoms for a morning commute. The past two years have proved that many tasks can be done from afar, and the ongoing “great resignation” has shown that if a current employer doesn’t meet a worker’s needs, another one will.

“Employees are the new consumers. They are going to vote with their feet about where or when they want to work,” says Joe Brady, the chief executive of Instant Group, which finds and manages office space for businesses. “Work has gone from a noun to a verb—from a place you went to, to a thing you do irrespective of place.”

Architects, designers, and developers see this as a watershed moment to reimagine the office as a desirable destination, worth the commute. Cubicles are out. Hoteling is in. The terrace is often the new conference room. Building owners and managers are now in the hospitality business, reconceiving lobbies and common areas as hotel-like spaces and offering white-glove services to make the workday inviting. “The office is a place for collaboration, for extroverted work, for social interaction,” says Daniel Kaplan, a senior partner at FXCollaborative. “And, so, we’re seeing big light-filled interiors, great amenities, and outdoor space.”

While few companies are redesigning their entire footprint yet, some are making smaller modifications as people return. The immediate challenge is managing hybrid work schedules. On any given day, a company might not know how many workers will be in the building. According to Brookfield Properties, daily occupancy is currently around 35 percent in its New York properties, down from 60 percent before the pandemic.

“The reasons why people are going to the office post-pandemic are different from the reasons they went pre-pandemic,” says Caroline Morris, an associate principal at Clive Wilkinson Architects. “It’s such an interesting moment in a time, where 9 to 5, Monday through Friday is really on the table for negotiation.”

Rather than shrink their footprint, many companies are exploring new methods to make distance workers feel more connected to those in the office, and embracing concepts like hoteling, which trades a dedicated desk for flexible seating arrangements. Gensler is updating the conference rooms at its San Francisco; Austin, Texas; and New York offices and experimenting with technology that syncs with its video-conferencing platform so that no one has to plug in a laptop to host a call. Instead, advanced microphones and high-definition smart cameras can zoom in on individuals and detect who is speaking. According to Natalie Engels, a design principal at the firm, the challenge is how to create an environment of inclusion in a meeting, to keep it alive. 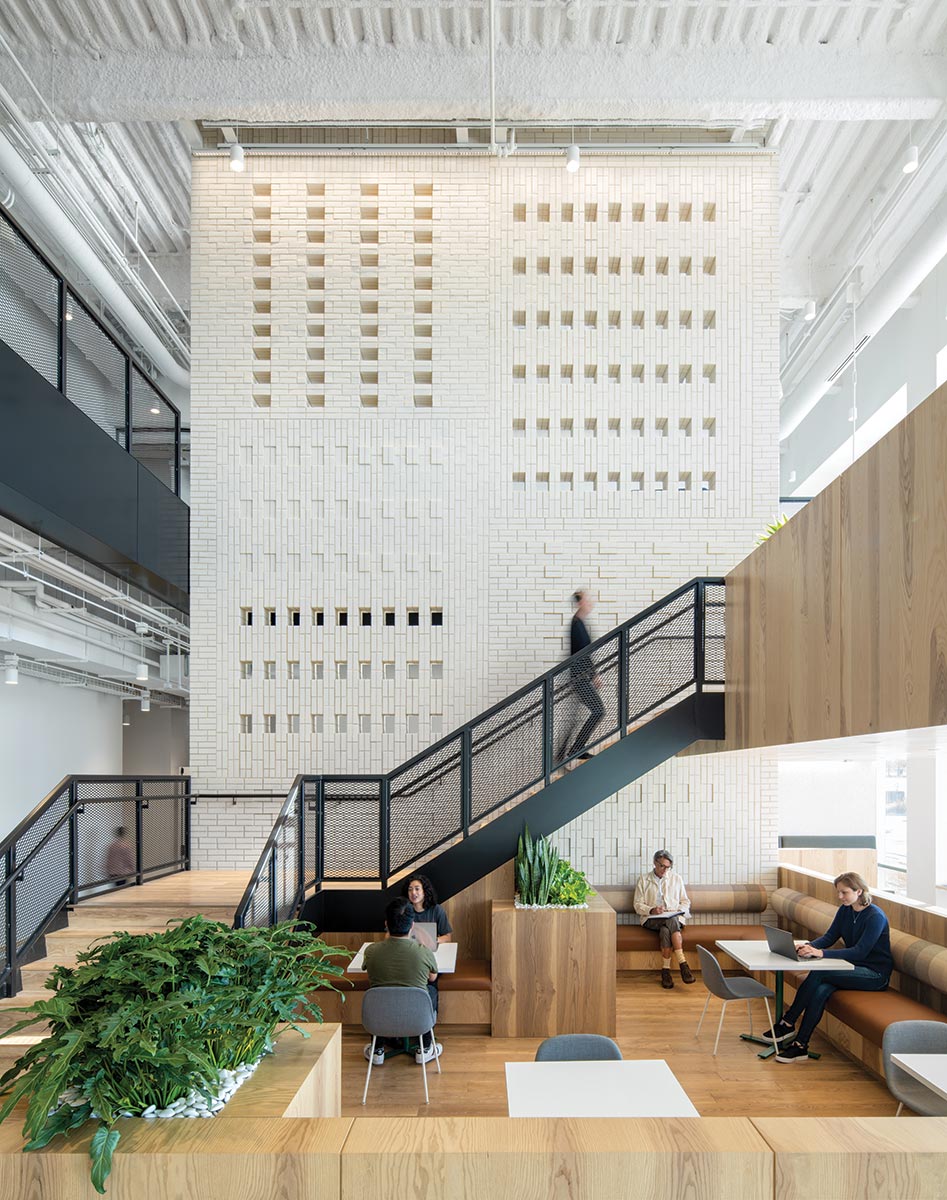 The Linkedin office in Omaha, by Gensler. Photo © Jason O’Rear

Gensler has also recently redesigned LinkedIn’s Omaha office, creating 200,000 square feet of team-based neighborhoods. In this configuration, staff can trade assigned desks for a team hub—a living room with lockers and seating that will give them a sense of place, as well as flexibility. “They wanted to bring employees back in a way that excited them and gave them an experience,” Engels says. Before the redesign, LinkedIn had a traditional layout with assigned desks. The new scheme provides opportunities to move to quiet areas for intense focus or sit in more casual settings for collaborative work. Gensler made similar changes to its own Miami studio. Rather than dedicating 50 to 70 percent of the space to assigned seating, it flipped the greater ratio, committing that amount to flexible seating for gathering, collaboration, and focus.

For a space to be flexible and encourage engagement, the seating needs to be adaptable too. MillerKnoll is experimenting with layouts that encourage collaboration at its Holland, Michigan headquarters, called the Design Yard. These include plush chairs and sofas, barstools that can be easily moved, and phone booths for privacy. Furniture with wheels, like rolling whiteboards, carts, or privacy screens allow for the modification and reconfiguration of spaces throughout the day. Turn an unused conference room into a library, and workers suddenly have a quiet, spacious retreat. These are “things that are designed to intuitively say, ‘You can move me around,’ ” says MillerKnoll director of design strategy Joseph White.

In the early days of the pandemic, workers worried about hand sanitization, social distancing, and recirculated air. Now their attention has shifted to general well-being, with workers demanding more distance between desks, more areas for socializing, and more opportunities for fresh air. “You think of Google and the endless array of amenities meant to keep people at the office forever,” says White. But that has changed. “It’s about things that are meaningful to people—providing private mother’s rooms and places for self-care. These are things that the workplace is uniquely suited to support.” Skidmore, Owings & Merrill incorporated several “wellness” spaces allocated for such activities in its recently completed New York office (page 92).

At Studio O+A, an interior-design firm in San Francisco, employees leave their street shoes at the door to reduce germs, stepping first into a mudroom off the lobby with lockers and cabinets. “People are having fun with it,” says Primo Orpilla, founding principal of the practice, which operates on a four-day workweek, with only two days spent in the office. “We call it donning and docking.”

The enthusiasm for health and peace of mind extends to the use of outdoor space. When possible, companies are embracing terraces, courtyards, and balconies as workspaces, bringing Wi-Fi, heated seating, shade, and sound systems outside. At 470 Park Avenue South in New York, SJP Properties converted an alleyway that had been used for loading into a dynamic courtyard, with a custom stone fire pit, bar, and bistro lighting. Across the country, in Seattle, Olson Kundig is repositioning a property developed by EQ Offices, 800 Fifth, by integrating a public plaza and garden with the interiors for private and community use. The building will have a new lobby and fitness center, as well as flexible spaces for large or intimate gatherings that will transition from indoors to outdoors seamlessly. 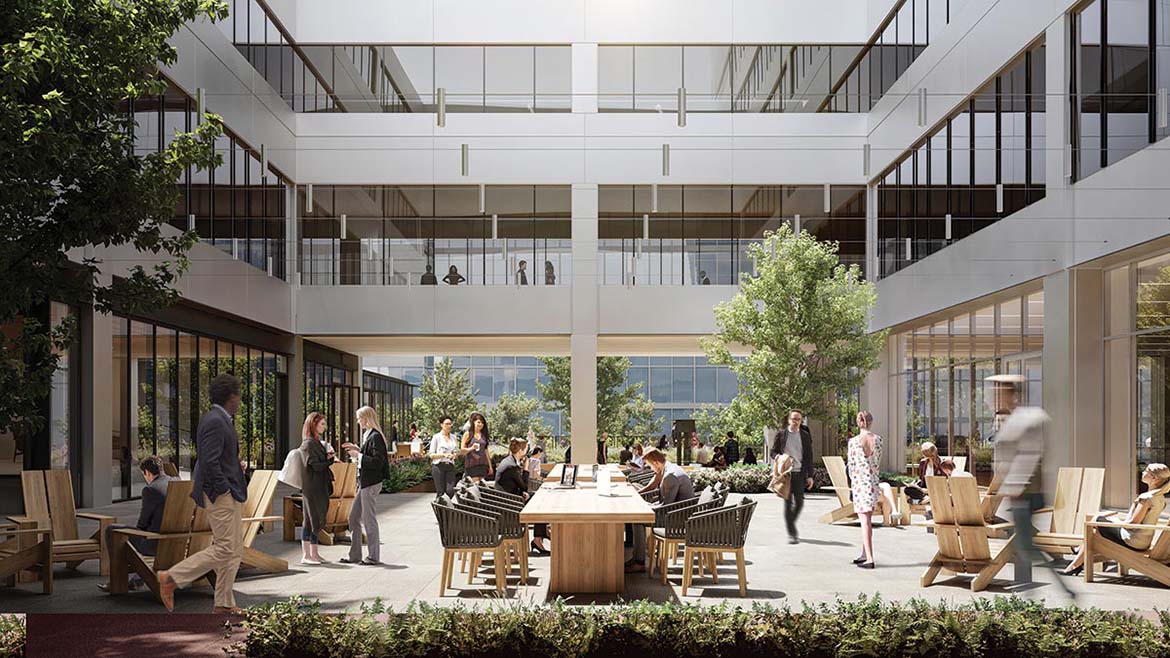 Rendering of Olson Kundig’s 800 Fifth in Seattle by Hayes Davidson.

Developers and architects are also increasingly looking to establish neighborhoods in and around their buildings, a practice that started some years ago. For the suburban market, this means reimagining the office park as a dynamic place conveniently integrated with key resources like shops, gyms, and day-care centers. As early as 2015, Somerset Development transformed the former Bell Labs building designed by Eero Saarinen in Holmdel, New Jersey, into Bell Works (architectural record, February 2020), a mixed-use property with offices, coworking spaces, a Montessori school, a hair salon, and a food hall—dubbing the concept a “metroburb.”

In similar fashion, building owners and managers are transforming lobbies to look more like hotels, with greenery and comfortable seating—for casual business meetings or after-hours socializing—as well as bars and eateries. In many cases, in-house staff provide services, such as coordinating meal deliveries and the use of conference rooms and other shared spaces. In Eden Prairie, a suburb of Minneapolis, Studio BV reimagined a drab suburban office building, One Southwest Office Building (OSWX), activating its dated atrium as a destination for meetings, lounging, and gatherings with gracious lighting and furnishings, media, and plants. According to the firm, the building, which was 80 percent vacant before the renovation, is now 90 percent leased in less than one year. 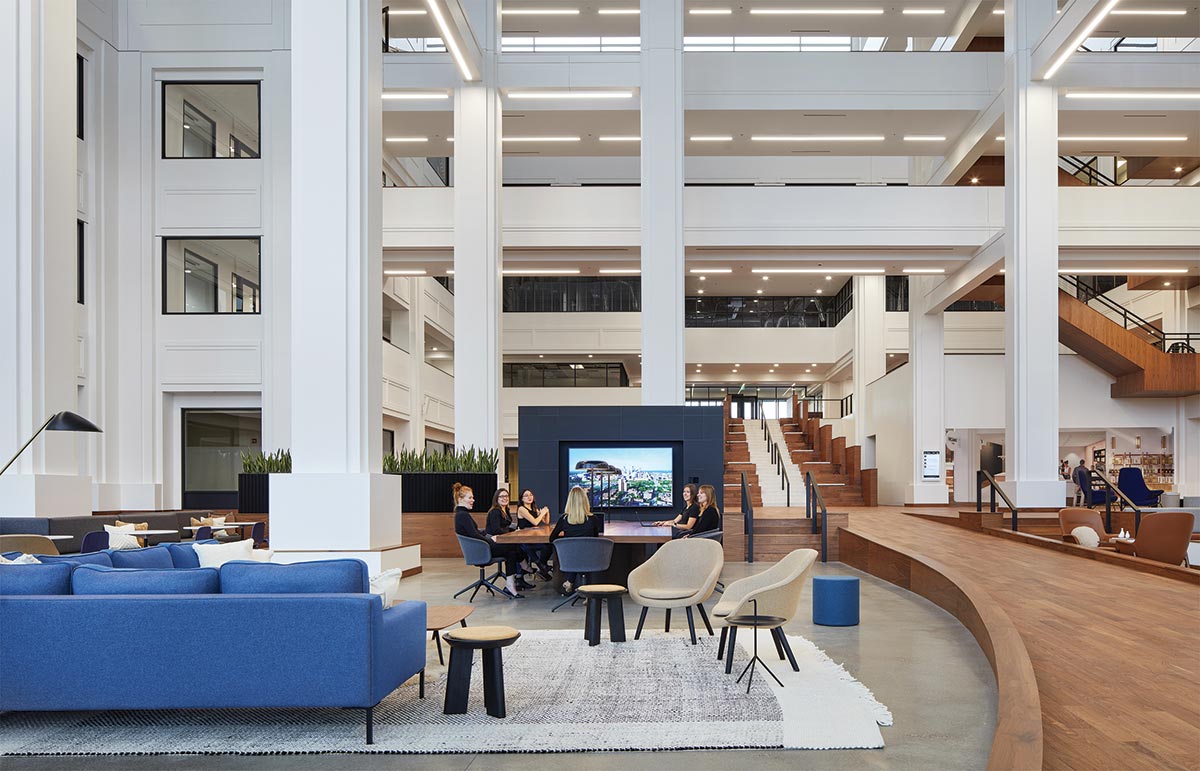 The lobby of a suburban Minneapolis office building was recast as an active communal space by BV Studio. Photo © Corey Gaffer

“The days of the traditional corporate cafeteria are over,” says Alexander Erdos, senior vice president of leasing and marketing at SJP Properties. The pandemic has reset worker expectations in ways that may usher in a new chapter in the American office, one that redefines the workplace as only one of the locations where work gets done. With the right elements, the office may reemerge as a unique environment that encourages collaboration and concentration, supports workers’ health needs, and provides an atmosphere that cannot be replicated at home. If the pandemic proved one thing, says Morris of Clive Wilkinson Architects, it’s that giving people the freedom and the choice of where they work is actually a benefit to an organization, to an individual, and to the holistic well-being of both.

Back to Future of the Workplace
KEYWORDS: cities