When it opened in the city of Mazar-i-Sharif (Mazar), in the northern part of Afghanistan, in June of 2015, the Gohar Khatoon school was the largest such institution for girls in the country. The 21,500-square-foot concrete-and-brick building complex has 27 classrooms, office space, and a tree-shaded courtyard, built to educate 3,000 students in kindergarten through the 12th grade. Commissioned by the Balkh Province Department of Education with a United States–based nonprofit, the Sahar organization, the project was designed by the late architect Robert Hull, cofounder of Miller Hull in Seattle, with an international team from the University of Washington School of Architecture, and built in collaboration with a local engineering and construction crew in Afghanistan. Architectural Record published a story about the school in January 2016.

After the Taliban returned to power in August 2021, the 20-year gains for women’s equality in public life and education were swiftly reversed. As U.S.-based members of the architecture and construction team of Gohar Khatoon, we were deeply concerned about the future of the school and its students. Earlier last year, before the U.S. military withdrawal, we had begun interviewing stakeholders in the project to better understand what aspects of the planning, design, and building process had contributed to its success and what might be done differently in the future. But our research has taken on profound urgency as we seek to assess the situation at the school from our locations abroad. Already, the Taliban has reneged on its promise to keep schools open, barring girls above sixth grade—nearly half of the Gohar Khatoon students—from returning to their places of study. 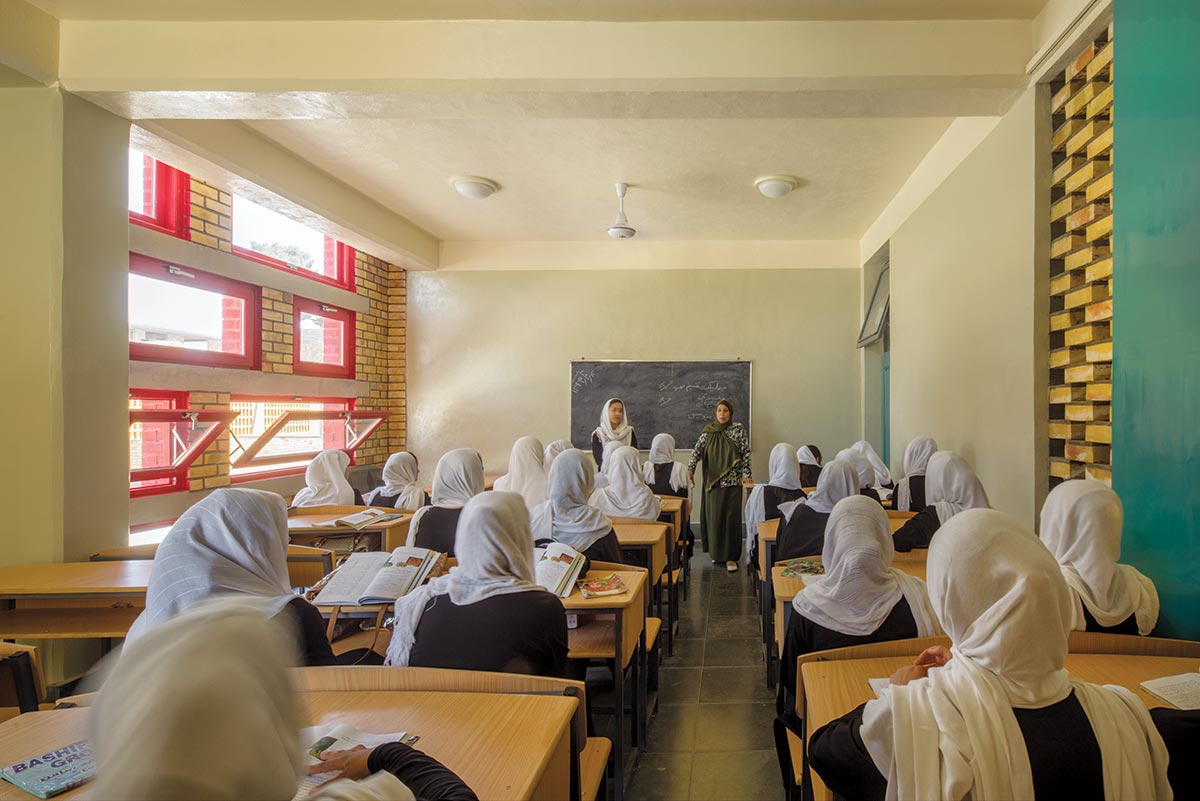 When its new campus (top) opened in 2015, the Gohar Khatoon Girls School, which is more than 50 years old, served kindergarten-through-12th-grade students in its classrooms (above). Photo © Nic Lehoux, click to enlarge.

Yet our research on the status of Ghohar Khatoon has yielded a somewhat promising result. The school structure remains in good condition, as it was before the return of Taliban, and has been fully operational during the past few months for the younger students, with the same teachers and headmaster. Classes have been a safe learning place not only for Gohar Khatoon’s students, but also for kindergarten through sixth-grade girls from other parts of the region that lack adequate school facilities to attend. It is still unclear whether or not the Taliban will allow older girls to return to their studies, despite the continuous appeal from local activists and pressure from the international community.

When, and if, the current de facto government keeps its promise to reopen all schools and allow young women to benefit from their educational rights—a right that is clearly emphasized in Islamic literature—the need for more educational facilities in Afghanistan will be inevitable. Gohar Khatoon, we believe, can be a model for the development of new schools to fill the existing gap, particularly those academic facilities which may eventually be built using foreign aid.

In designing Gohar Khatoon, we aimed to create an institution that could inspire a sense of ownership within the local community and provide girls and women with opportunities for promising future careers. We reinterpreted the cultural and historic context of Mazar in a contemporary language, using colors, spatial patterns, locally available materials, and traditional building techniques. In the process, we consulted with some of the students and engaged with the teachers and religious authorities, who weighed in on the project. The wider community was also included through a national mural competition, with winners painting their artwork on the school walls.

The post-occupancy survey we conducted with 40 Gohar Khatoon students, a few of its teachers, and community representatives in June of 2021, before the Taliban takeover, showed a high level of satisfaction with the school, its architecture, and some of the amenities provided that are not found in other girls’ schools in the country.

Their favorite spaces were the enclosed southern courtyard because of the privacy it provided, and the two computer labs. But they missed having a library and an indoor gathering space. The least favorite components of the project were the many classroom windows, because of the intrusion on privacy and sense of safety, and the glare they caused. Based on our interviews with the teachers and local representatives, community participation at even earlier stages of the design process could have made the project and its perception in the area even better. Furthermore, we realized that in creating educational spaces for women, it is critical to include the actual users in the design process in order to effectively encourage the cultural mindset in favor of women’s education, not only to support girls in enrolling in school, but also in staying in school and pursuing higher education.

Afghanistan is a young country, with nearly 64 percent of the population under age 25. In 2001, only 1 million students were in school, but, by 2021, the number had reached 10 million, and almost half were girls. Still, the need for more facilities is a problem far from being solved; if all schools were operating at full capacity across the country, an estimated 3.7 million children between the ages of 7 and 17—around 60 percent of them female—would not have a place in school. To secure a brighter future and become part of the global community, a renewed effort of bottom-up, collaborative approaches for providing educational infrastructure for all young women will be essential.

Yasaman Esmaili is an architect and educator with a practice, Studio Chahar, in Boston and Tehran.

Solaiman Salahi is a civil engineer and Fulbright Scholar from Afghanistan currently based in Seattle.