How the AIA Plans to Deliver a Zero-Carbon Headquarters

The American Institute of Architects’ Washington, D.C. headquarters is compromise embodied. More than a decade after the Philadelphia firm Mitchell/Giurgola won a 1958 design competition, the AIA at last opened its seven-story headquarters in 1973—after a bruising, protracted battle with Washington’s strict planning authorities that ultimately led to the project being taken over by The Architects Collaborative of Boston. The completed structure is tail-end brutalism: concrete and glass ill-suited to a post-1960s world of high energy prices and postmodernism.

Almost 50 years later, the AIA is determined to get things right. In late April, the organization unveiled a schematic design by San Francisco’s EHDD for a long-planned headquarters renovation that it hopes will pull the building from behind the curve to ahead of it, and in the process make a case for the AIA’s—and the profession’s—leadership in confronting contemporary crises. Its designers say that the project will achieve the rare feat of fully compensating for its carbon impact: not only is it aiming to achieve net-zero operation, but it will also offset the carbon emitted in construction through a novel arrangement in which the AIA will donate solar panels for use by low-income homeowners.

“We think it's probably the first large renovation where all carbon is being offset, the operational carbon and the embodied carbon from the construction,” says Peter Rumsey, the CEO of Point Energy Innovations, a consultant on the project. “The greatness of this project is that it shows the future of how we're going to decarbonize our economy.”

In designing the renovation, architects at EHDD have made use of new carbon modeling software called EPIC, which the firm developed in-house. EPIC is “not a life-cycle assessment tool,” says EHDD partner Brad Jacobson, but rather a “directional tool” that allows designers “to make decisions early on that sets you in the right direction towards achieving carbon neutrality.”

EPIC, which is web-based, boasts an intuitive graphic interface that allows users to input general information about a project, including square footage, program type, and location. It then maps out the carbon impact of different high-level strategies, like going all-electric or utilizing a steel structure. EHDD is now employing EPIC across a variety of its projects to assess both operational and embodied carbon, and the firm is planning to release the software to the public free of charge in June.

The design team’s initial calculations for the AIA project, as generated in part using EPIC, show that the embodied carbon of the renovation will total a little over 4,000 tons—a figure kept low by renovating the existing building rather than building a new one. By donating solar panels to power around 60 homes in the D.C. area, the AIA will offset the embodied carbon over 20 to 25 years—while helping low-income homeowners lower their energy bills and reducing pollution from electricity generation. The AIA is currently in talks with a prominent non-profit to facilitate the donation, a representative told RECORD.

“We think this is a replicable model until we can get a handle on embodied carbon,” says Jacobson. “A lot of work needs to get done to create lower- or zero-carbon concrete and steel and so forth, but that’s going to take time.” In the near term, he says, those carbon-intensive processes can at least be balanced out through offsets.

Operationally, the renovation will reduce the AIA building’s energy use by 58 percent compared to current levels through a variety of strategies including the replacement of its windows and roof. Gas boilers that date to the building’s construction will be replaced with electric heat pumps, enabling the building to be fully electric. And two sets of photovoltaic arrays, one on the roof and one built into a new glazed brise-soleil, will provide around 10 percent of its energy. The remainder will be purchased renewable energy, enabling the building to achieve net-zero operational carbon.

Beyond carbon reduction, the $50-to-$70-million project will modernize the building’s public spaces and workspaces and improve the accessibility of the landscape that links it to the nearby Octagon House museum. Plantings throughout the interior will benefit occupants and help link indoor and outdoor spaces. And the building’s famously lavish executive suite will be opened up for use by members to host meetings and events. “We’re keeping the gravitas of the space,” says EHDD partner Rebecca Sharkey, “but breaking down the formality that has a hierarchical feel to it.”

In an existing below-grade space, a new amenity suite will be created, offering collaboration spaces, a workshop, a reading room, and what the designers call a “coffee point.” To facilitate easy access and link it to the atrium above, EHDD has designed an elegant mass-timber stair as a counterpoint to the existing brutalist stair linking the building’s first and second floors. The new stair will be a “carbon-neutral design feature,” Sharkey says—and a symbol of how the AIA’s values have evolved over the half-century since the building opened. 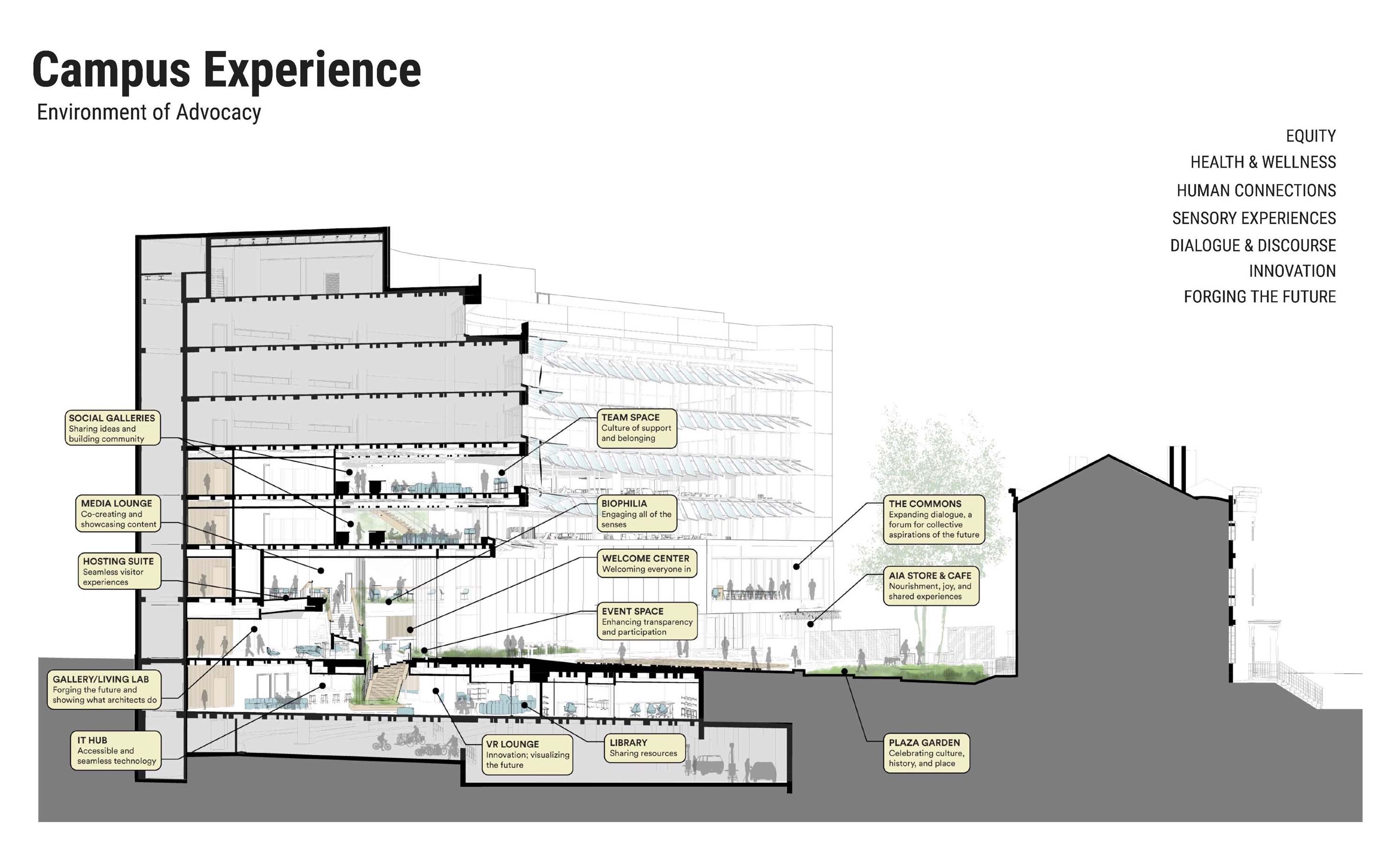 AIA Unveils Design for a Redo of Its Washington Headquarters

How to Deliver Thousands of COVID-19 Rooms in Weeks