The research is sobering, but not surprising. The data tell us that communities of color are on the front lines of the environmental emergency. In the United States, racial and ethnic minorities are more than two times as likely as white populations to live with air pollution levels above the 90th percentile. In almost all large U.S. cities, the average person of color lives in a census tract with a higher surface urban heat-island intensity than those that are predominantly white, and those neighborhoods are also 50 percent more vulnerable to wildfire than those of majority-white residents. And, while property loss due to flooding disproportionately impacts poor white communities, scientists predict that, by 2050, increased flood risk will disproportionately affect Black communities. This racial divide only threatens to widen as the climate crisis accelerates.

But, as the world heats up, environmental leaders, community activists, and policy makers are working to create funding programs to address these inequities while decarbonizing the built environment.

One federal program that could help reverse a legacy of environmental neglect is Justice40, part of President Biden’s January 2021 executive order “on tackling the climate crisis at home and abroad.” It commits to delivering to underserved communities at least 40 percent of federal investments in climate, clean energy, affordable and sustainable housing, and other areas.

It is difficult to solve a racebased problem without acknowledging race.
— Dana Johnson,
of environmental justice group WE ACT

Agencies will be able to identify communities to target with a screening tool now in development, using such data points as household income, education level, life expectancy, and the presence of health hazards like lead paint or nearby superfund sites. Race, however, is not a criterion, despite Biden’s campaign promises to address the environmental burdens borne by communities of color. As numerous news outlets have reported, the color-blind approach is intended to avoid legal and political challenges. But some advocates worry the strategy will leave out the very people the program is intended to help. “The research tells us that pollution corresponds with race more than income,” says Dana Johnson, senior director of strategy and federal policy in the Washington, D.C., office of WE ACT, an environmental-justice group. “It is difficult to solve a race-based problem without acknowledging race.” She also worries that because Justice40 was created by executive order rather than legislation, it can easily be undone by a future administration. That is why, she says, getting the funding processes in place is so critically important.

Still, if Justice40 works as intended, it could radically alter how federal dollars are distributed. “We are changing how the federal government operates,” says Mark Chambers, senior director of building emissions and community resilience at the White House Council on Envi­ron­mental Quality. “We are changing its DNA.”

Some cities, too, are creating their own programs and funding for battling climate change and inequity. Ithaca, New York, with 31,000 residents, has a bold plan to electrify all its buildings by 2030, approved by its Common Council last November. It will retrofit about 6,000 public, private, residential, and commercial structures so that they no longer rely on natural gas, propane, or fuel oil for space- or water-heating, or cooking. The work will be performed along with such energy-saving measures as replacing windows, improving insulation and air sealing, to make the building stock—80 percent was constructed before 1940—more efficient. 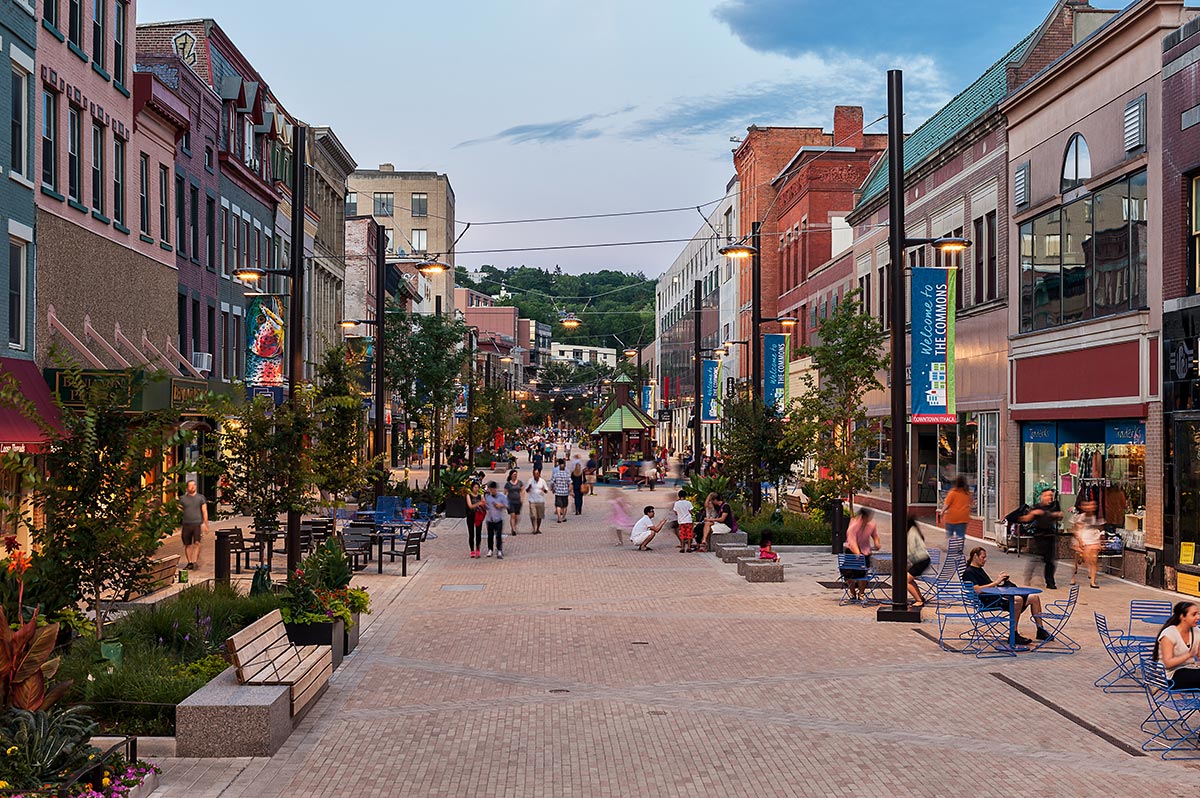 By 2030, Ithaca, New York, plans to decarbonize all of its building stock, 80 percent of which was constructed before 1940. Photo © Christian Phillips, courtesy Sasaki, click to enlarge.

Other U.S. cities are turning to electrification as a carbon-cutting strategy, as the grid becomes cleaner and electric appliances more efficient. Berke­ley, California, jump-started the electrification movement in July 2019, banning gas connections in new small and midsize residential buildings. Since then, 77 jurisdictions across the country have instituted so-called “gas bans,” including the most populous city—New York. (Electrifi­cation has become such a trend that many states with Republi­can-controlled legislatures, where the fossil-fuel interests are strong, have rebelled and passed so-called “pre-emption laws” that prohibit cities from instituting gas bans.)

These building-electrification policies aim to affect health as well as reduce carbon. According to research from MIT, in 2018, combustion emissions from the buildings sector was the most significant cause of air pollution–associated premature deaths (in 2005 it was fourth, behind vehicle emissions, electricity generation, and industry). Mean­while, a study by the Rocky Mountain Institute (RMI) and its collaborators found that levels of nitrogen dioxide—a gas associated with learning deficits and increased risk of asthma—were 50 to 400 percent higher in homes with gas ranges, not electric stoves. “Improved air quality is the biggest benefit of electrification for our communities,” says Annie Carforo, WE ACT’s climate-justice campaign coordinator. Electrification, its supporters say, is not more expensive. An RMI study found that, in most new-construction scenarios, electrification reduces costs over the lifetime of appliances compared with fossil fuels.

With so many cities adopting electrification policies, Ithaca may not seem so notable. But it is the first to focus on existing buildings rather than just all-electric new ones. The initiative includes creating a “green jobs corridor” in conjunction with nearby cities. Apprenticeship programs will be geared toward groups with high unemployment or underemployment, including members of tribal nations and the formerly incarcerated, says Luis Aguirre-Torres, Ithaca’s director of sustainability. Finan­cing will come from private equity, providing low-cost loans to property owners, which they will pay back through energy savings. The city has already secured $250 million in capital—about half of what will be required to retrofit all 6,000 buildings, he says. The program appeals to investors interested in social impact, says Keith Kinch, a cofounder of BlocPower, the Brooklyn-based climate technology company that will manage the program.

Portland, Oregon, is financing a climate justice program through a 1 percent surcharge on large retailers. Established in 2018 via a ballot measure approved by 65 percent of voters, the Portland Clean Energy Community Benefits Fund (PCEF) was devised with the help of a coalition of Portlanders of color, faith-based organizations, and labor and environmental groups. PCEF, which will fund clean-energy, green-infrastructure, regenerative-agriculture, and workforce development, “is fundamentally about addressing climate change and a community that has been excluded to date,” says Sam Baraso, its program manager.

The inaugural round of grants last year awarded $8.6 million to 45 projects that are estimated to achieve a savings of 11,500 metric tons of carbon. They include installation of rooftop solar on low- to moderate-income households of color, deep energy retrofits to Black-owned homes, and the replacement of impervious paving with native landscaping and shade trees at two schools with majority BIPOC student populations. Baraso expects to award the second set of grants, totaling $60 million, this summer.

Initially projected to generate between $44 million and $61 million annually, the retailer surcharge brought in $116 million in FY 2020–21 alone. But along with this influx of cash has come controversy. Earlier this year, the city council voted to rescind one grant after a local paper brought to light that the director of the recipient nonprofit had been convicted of fraud. She has subsequently sued the city. Then, the Portland Business Alliance called for a freeze on disbursing funds after the City Auditor’s Office recommended the PCEF re-evaluate its oversight, set a timeframe for completing a workforce-equity plan, and create guidelines to assist young nonprofits, among other improvements.

Baraso declines to comment on pending litigation but says that the audit results are entirely what one would expect for such a new and ambitious program. Many changes are already under way, he says, including structured support for less established nonprofits. “We can continue to implement the recommendations while moving forward with the next cohort of projects.”

Given the magnitude of the environmental-justice problem and the urgency of the climate crisis, forging ahead with such innovative local and national funding models may well be the most practical option. The same old financing formulas won’t achieve building decarbonization or address equity on the scale or with the speed needed. The innovative thinking behind strategies like PCEF, Ithaca’s electrification plan, and the federal government’s Justice40 could be our last and best chance for creating a low-carbon future in America.