A Soaring, Light-Filled Atrium Is at the Heart of this San Francisco Facility Serving Mental Health Needs

The Nancy Friend Pritzker Psychiatry Building celebrates this branch of medical practice as worthy of high design. This new 173,000-square-foot home for the University of California, San Francisco (UCSF) Department of Psychiatry and Behavioral Sciences, designed by ZGF Architects with Perkins&Will as exterior architect of record, includes a combination of clinical, education, and research facilities for a wide range of users. It offers spaces to UCSF faculty not only from psychiatry but also neurology, pediatrics, neurosurgery, obstetrics/gynecology, radiology, and anesthesiology. And it provides mental health services to both children and adults. “The purpose of this building was to bring everybody together in a much less institutional building than you traditionally see with UC campuses,” says Dan Kingsley, managing partner at SKS Partners, the building’s owner and developer with Prado Group.

The department’s previous home, the Langley Porter Psychiatric Hospital and Clinics, is such an institution. Located in San Francisco’s Parnassus Heights neighborhood on a campus of UCSF medical buildings, Langley Porter was designed in the early 1940s (and will soon be replaced by a hospital designed by Herzog & de Meuron). The old L-shaped, boxy building with small punched and ribbon windows has a rather defensive street presence. “The Pritzker Building was supposed to be the antithesis of that,” says Dwight Long, design principal of Perkins&Will, “and a beautiful, friendly, welcoming space for mental health care.” The building exterior adjusts to the scale and textures of its neighbors (top), while the interior is light and welcoming (above). Photo © Bruce Damonte, click to enlarge.

Parnassus Heights, with its white hillside towers, is very different from the Pritzker Building’s neighborhood of Dogpatch, which used to be dominated by industrial buildings and workers’ housing built along bayside docks, but which has been undergoing a change. A block from Pritzker, the new AECOM-designed Crane Cove Park sits on a seven-acre stretch of a former shipyard. And, all around, numerous mid-rise residences have replaced older structures. (A warehouse and parking lot had occupied the Pritzker site.) The building’s immediate neighbors include Victorian-era houses on Tennessee Street to the west, an art studio and restaurant on 18th Street to the north, and new housing to the east across Third Street, a major transit corridor.

Pritzker’s three facades are scaled to their unique contexts. The most monumental side, with entrances to the building’s garage, is on Third Street. Its fifth floor is set back in deference to the height of neighboring buildings, and a corner café (scheduled to open in September) makes a nod to Third Street’s commercial zone. Pritzker’s 18th Street facade is more articulated. Here three-story-high metal-wire-mesh screens hang above the main entrance. A dedicated entryway to Pritzker’s Child, Teen and Family Center is on Tennessee Street. This three-story end of the building is more in scale with the local Victorians. Metal panels, glass curtain walls, limestone, and wood make up the exterior cladding on all sides. “The materials are derived from some of the textures that you see in the existing fabric,” says Justin Brooks, design principal of ZGF; “metal panels, for example, on some of these older industrial buildings, or the horizontal joinery that you see in the Victorians.” At the heart of the building is a light-filled five-story atrium (1 & 2). Photos © Bruce Damonte Inside, a variety of rooms—consultation, dry labs, open-plan workspaces, staff lounges, huddle areas, waiting rooms—surround a light-filled five-story atrium. This soaring space, with its floating baffles for light and acoustic control and bridges for cross access, helps with general orientation. “I never feel like I’m lost in this building,” says Long, “because I can always sense where I am and get centered.” The atrium also organizes the program, with clinical rooms largely on one side of it and research on the other, with visitor waiting rooms facing onto it and staff rooms at the building periphery, and with a 175-seat auditorium and numerous meeting rooms at its base, children’s spaces at its lower levels, and adult spaces above. Special consideration of children’s access to the facilities played an important role in the design of the Pritzker Building. The concern was instigated by Lisa Stone Pritzker, who, with her husband John Pritzker, helped fund the building—named in honor of John’s sister, who died by suicide at age 24, in 1972. “Lisa was a volunteer at SF General,” says Kingsley, “and witnessed young psychiatric patients coming in to see their physicians and having to walk by county prisoners in orange jumpsuits having psychotic episodes.” This experience drove the design of the separate children’s entrance. Its semiresidential look includes plantings and wood benches composed in a stoop-like setting. A wall of images taken by teen photographers stands next to the door and adds to the child-focused design. This focus does not mean simplification. “We want to make sure that we don’t create a space that says it’s so specific to children,” says Brooks. “Kids are bright, and they can enjoy and find value in things like the changing photography collection, the lights, and the shapes, at a level much higher and deeper than they’re often granted.” A rooftop garden, accessible to staff and to patients, under supervision, caps the building. Photo © Bruce Damonte

Similarly, the architects did not stereotype psychiatry when making design decisions. According to Dr. Matthew State, professor and chair of UCSF Department of Psychiatry, the building seeks to elevate the status of psychiatry within the medical world and eradicate the stigma often associated with mental health. “We had this complicated, four-dimensional puzzle that includes research, education, clinical care, pediatrics, and psychiatry,” he says. “But we also had a really strong through-line: the building should communicate to people the value that we place on our patients. And part of that is to really think about the design—how this can be beautiful and light and optimistic.” 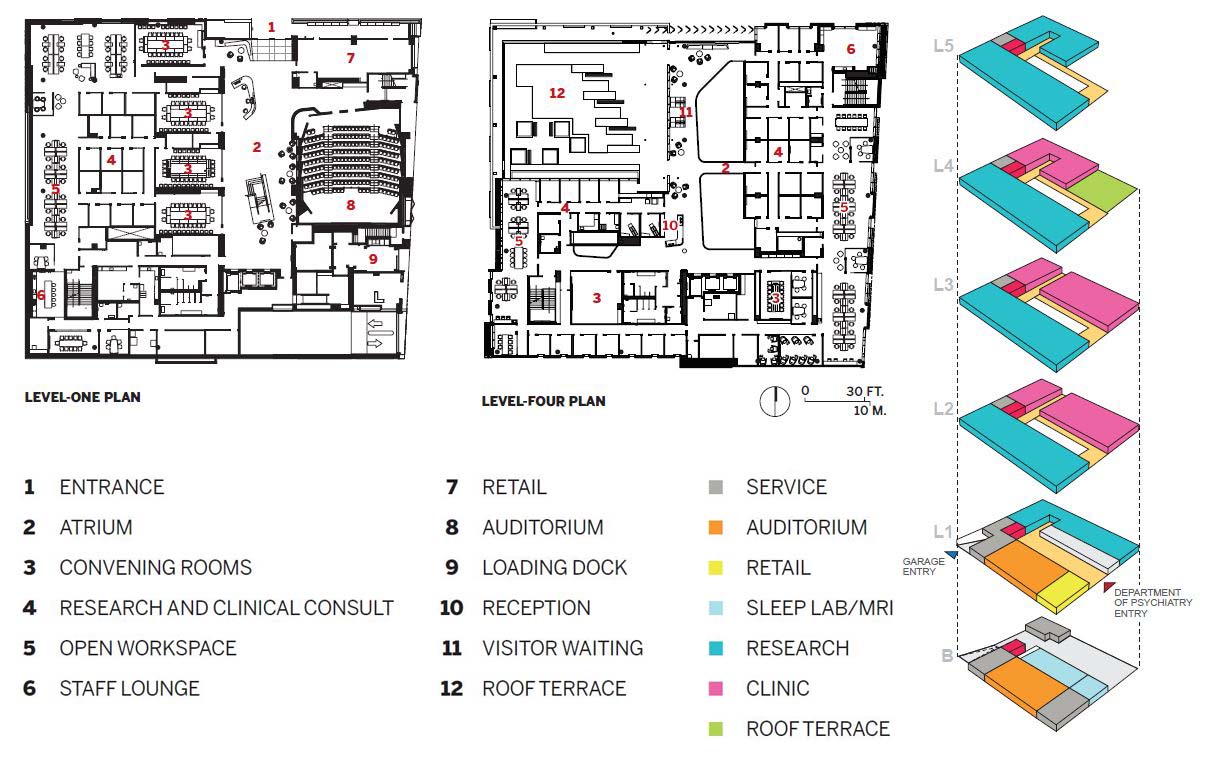